most screen-accurate cardboard/papermache jetpack ever! (pic-heavy!)

I already started this project during the end of my EIII premiere-countdown after I saw raptorarts great cardboard/papermache jet pack.
I was so fascinated of it, that I wanted to try to make the most screenaccurate cardboard/papermache jet pack ever. ...however as it is my first try, it may turn out as a piece of unreckognizable modern art as well.

To have it complete I post the few early pics from the countdown too and will post pics of every single step and piece, so if it works out in the end, it might be used as kind of a tutorial.


The starting bases are the blueprints that can be found in this forum (which are by the way great work!) for all the measures and shapes.
Afterwords you need a big piece of cardboard and on it goes!


After the cutting and bending (pic1+2) of a shape that covers most of the mainbody, I used another piece of strong cardboard bend to a slight curve for the use as the backplate (always noticed the packs with a flat back, which results in hanging ot far back with the rocket pointing more backwards than up)(pic3).

The next step were the tubes.
I used those pringles chips cardboard tubes, which have suprisingly the exact diameter as needed, but as the are too short I had to use pieces of a third taped above (pic4).
For the maintube I used a thick cardboard tube usually used for accomodating large pieces of drawings and blueprints. Sadly it's diameter is 1cm (1/3 inch) to wide) but still better as the next smaller which was nearly 2cm too small (well, there goes the screen-accuracy ). The Tube is long enough to easily get three maintubes out of it (so next project "screen-accurate stubby jet pack"! WAAH!).
(pic5)

The first detail I worked on in this early stage was the rockets grit at the bottom. I took the measures of the blueprints and cut out the piece. Then I cut the grits into it (pic 6) and backed it up with a piece of black cardboardpaper.
For the "sinkhole" of the grit I used the same cardboard paper (which I will use for all smaller parts) and formed it with enough edge left for gluing it later to the bottom of the pack as well as the gritplate into the sinkhole (pic7+8).
Then simply attached the complete construction to the bottom of the pack (be aware that it still fits with the tube above it, but if the measures were followed correctly it fits like a glove). (pic9+10)


So much for the start.
Please don't expect that my progress on the jet pack will be as fast as on my Jango, as I have to concentrate most time on my studies for exams.
But I think I might be able of making one step a week (just for relaxation of course ).
So please be patient.


PS: Could anybody tell me how I can integrate the pic within the text and not only attaching all the pics at the end? :confused
Would be nice. 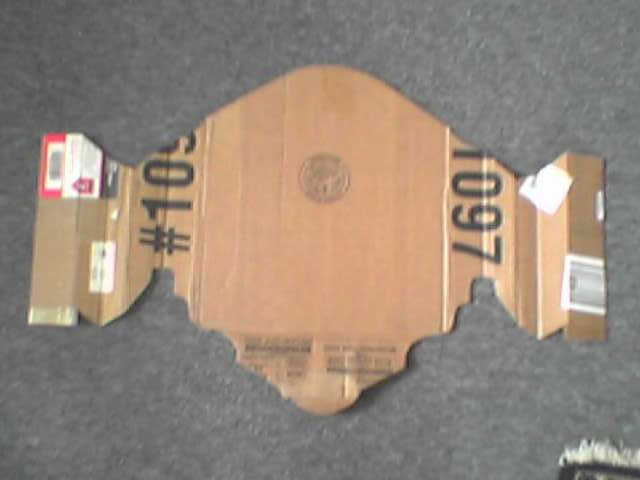 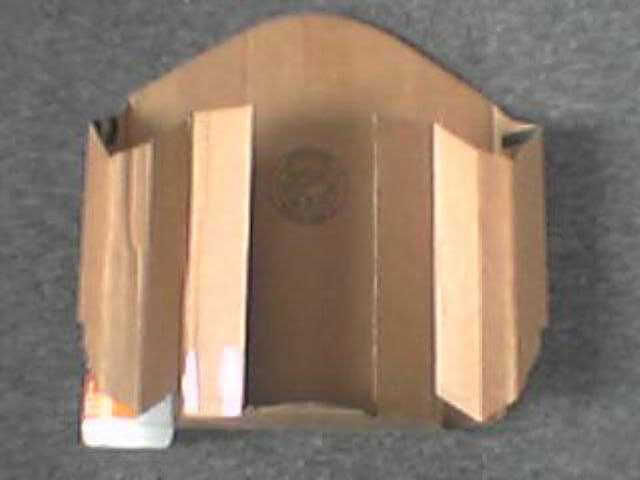 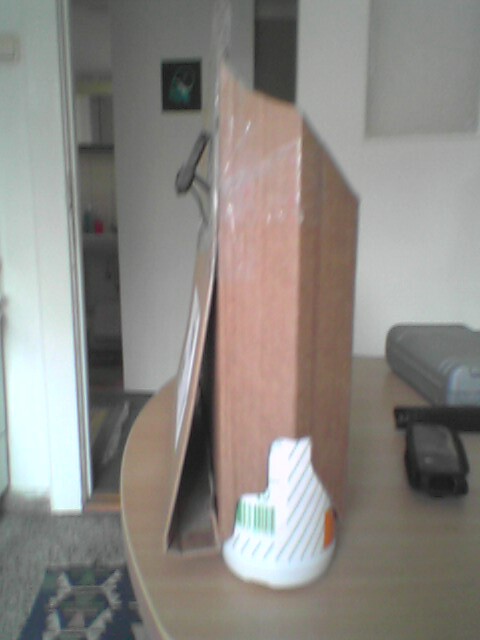 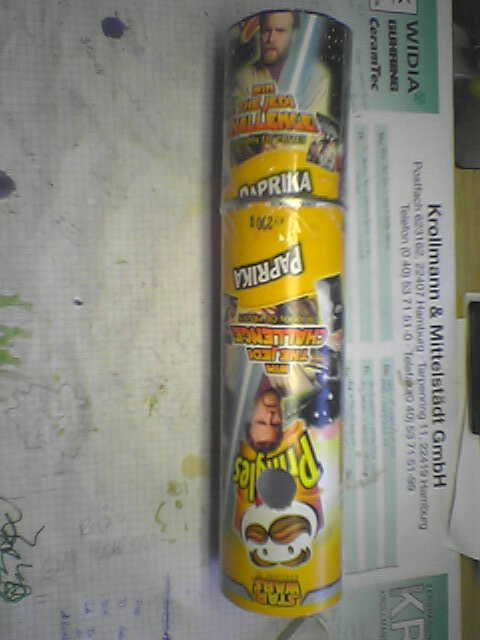 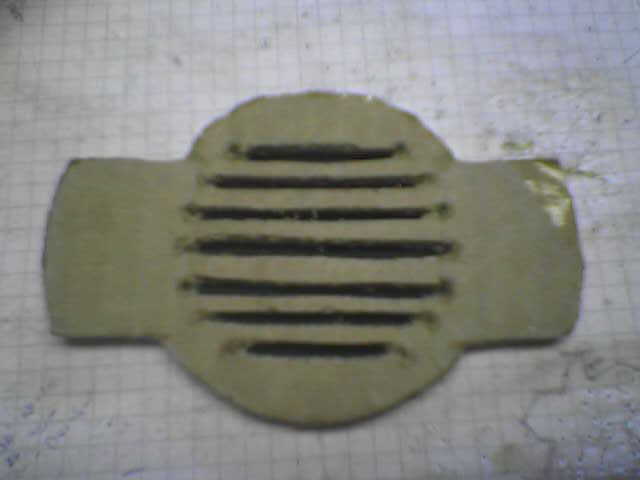 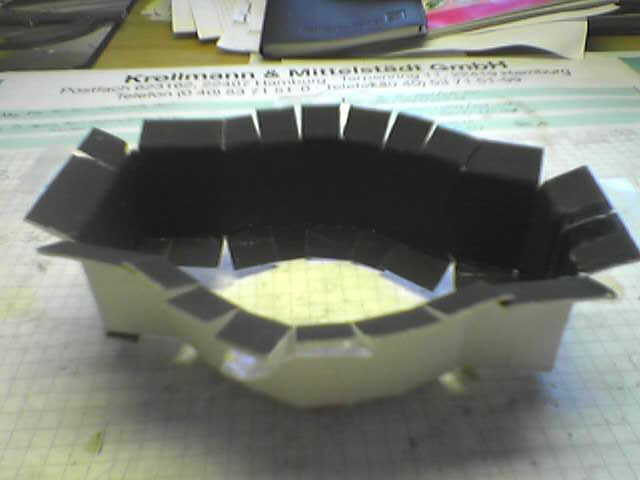 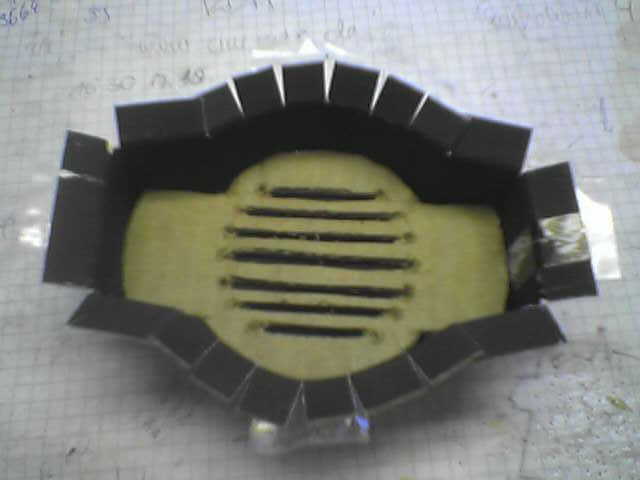 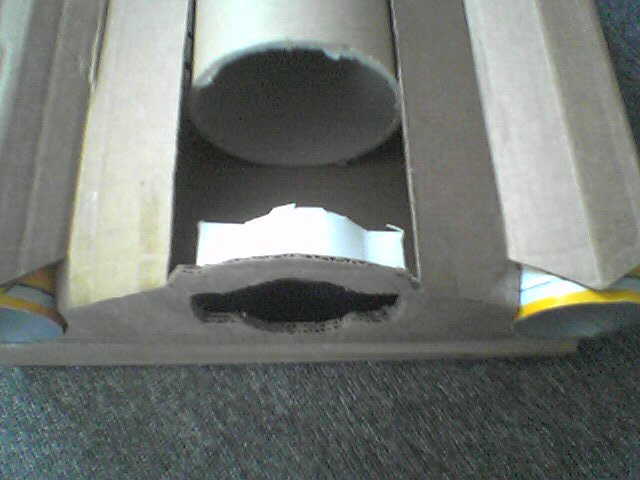 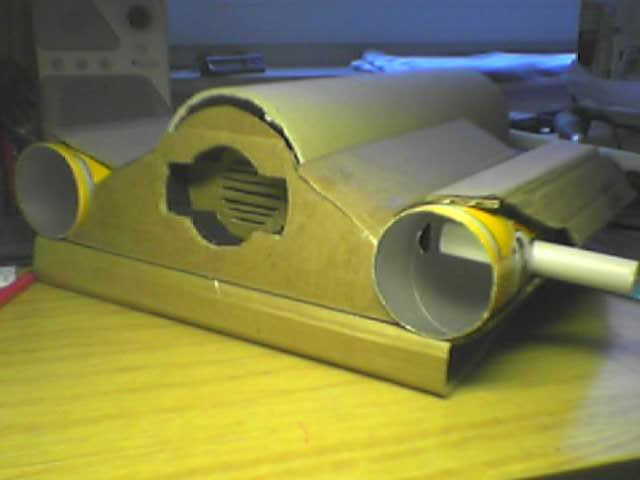 That is some nice work there man! Great job, again! Don't quit! Maybe you could try using bondo on the end product to fill in any gaps and so on (if the bondo will work with cardboard, I know nothing of bondo, other than it is kind of like a putty/clay). Goodluck bro!!!
Last edited by a moderator: Jul 24, 2017

askywalker98:
The gaps and edges will be closed and smoothend at the end while covering the pack with a coat of papermache, so it will then look like out of one piece (hopefully ).
Last edited by a moderator: Jul 24, 2017

That's impresive and so simple! I'm stunned! I've been trying to make a jp from plastic and fiberglass (and failing so miserably that I've given up!) and here's the answer starring me in the face! Genius! You have set those of us who are fibreglass/resin challenged (I just make a solid looking mass of goo!) and/or on a budget (priorities people! You can eat NEXT week!) on the right path.

pLS..more detailed pics!! I would like to take what u have done to make it to an Arena Jet pack!!

hmm... I may do something simmilair for my "exhaust" port as I dremmeled myn out because it was so bloody inaccurate, haven't gotten aroun to making one though... looks cewl

allthough I might try something with plexi-glas... thnx for the inspiration!!! :cheers
Last edited by a moderator: Jul 24, 2017
B

try search function... but (im NO Jango expert) isn;t the main body about the same size??
Last edited by a moderator: Jul 24, 2017

OrtharRrith:
Thanx for the praises , but most of the credits deserves raptorarts, as he was the first to do a really great looking cardboard jet pack I saw, which inspired me to this project.
I was suprised the same way, what a easy and ingenious way that was, instead of all the work with fibreglass, resin etc. and by the way, I was sick of staying hungry for a jet pack. :love

...and it's probably the nearest thing to bobamakers (or was it TK-409?) plans of a tissuepaper jet pack from CIII, with it's low weight.

For the Star Wars pringles: I thought a lil bit of the Force inside the jet pack might be helpful for the project.


Bleahhh:
I'm sorry, that the pics are always a bit fuzzy as there are only made with a mobil cam, but that's the only possibility I have right now.
As for the Arena Jet Pack; the size of the mainbody should be the same as far as I know (that's the reason, why I'll do the stubby pack too, if this really works out fine. ).


@R_boba_fett:
Glad I could be of help . Making the gritplate from plexiglas would be even easier as with cardboard as you will be able to cut out the grit straight much better, but how will you bend the "sinkhole" part from plexiglass?
Last edited by a moderator: Jul 24, 2017

you mean the elevated part, so that it will be up a little?

just a straight line of plexiglas, the length of the hole I currently have, heat up at pre-measured "fold-points" and place the part with the "bars in it on top... am I making much sense here?? :confused

hope this is a little easier to understand.. 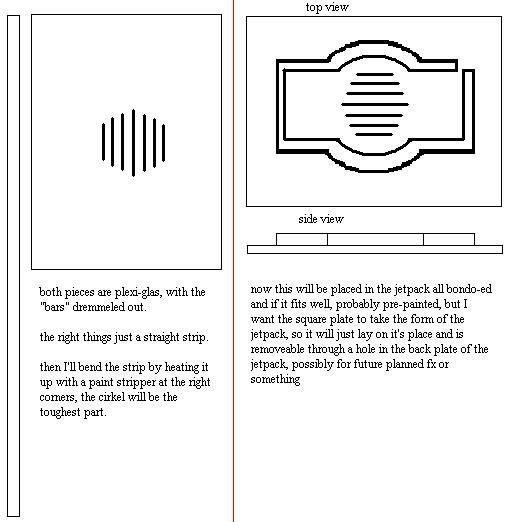 Nope, I'm sorry. No time due to exams.
From tomorrow on I won't be at home (except for a few days in between) till mid of september. So there will be no progress till then.

But the good news is, that after that I should have about two weeks in which I will have plenty of time to concentrate on the JP (and hopefully finish it).

So don't despair and stay tuned, the cardboard jet pack is inevitably on it's way.
Last edited by a moderator: Jul 24, 2017
A

Sounds cool man. Take your time on those exams. Don't let a cardboard jet pack stop you from succeeding!(sp?) Goodluck with those exams!
Last edited by a moderator: Jul 24, 2017

Magical me of course!

Good news everyone: To all my fans, who have missed me the last two month I can say, now that I've past my exams succesfully, that the work on the amazing screen-accurate cardboard/papermache jet pack will be continued probably in the beginning of next week. :cheers

Welcome back homie! Glad to see this think taking off once more. Everything is looking great so far!
Last edited by a moderator: Jul 24, 2017
J

Is there any accurate Jango 3d files?

Is there any accurate Jango 3d files?