Thank you Dent for setting the tone.

I talked over color with my hubby and it matches the dressing the galaxy book. I know that many fabric swatches that were in the book don't match what was taken by picture, but taken by picture could be more "true" to what was seen on screen, due to lighting at that time. We are happy that we were able to match 2 out of the many hues of purple that are given by so many sources. Like I said before, if there were different lighting on the tricot fabric, the tricot fabric color too, would look different. As evidenced by

The first pic was taken with a regular 60 watt bulb on the side of the tricot fabric in a room in my house 3 years ago during the first run.
Therefore, I think that out of 2 reference movie shots~ it would be safe to say the the color chosen by DCB, me, and the 14 other people on the previous run is why I will be staying with the same color as opposed to spending a tremendous amount of $$ on lap dips from the dyeing company trying to "match" something else. The movie shots are a lot darker than any visual dictionary picture.
Last edited by a moderator: Nov 13, 2006
K

I'd been waiting to post this until I had some of ZamIAm's neoprene in hand for comparison.

Let me preface by saying I'm not Unhappy with the custom Neoprene run. I think given that a pantone book was being used in probably a dimly lit exhibit, then lab dips were being done attempting to match a pantone guide & paint chip cards - she got really close!

Some of you may know that Trisha Biggar did shop at stores in San Francisco for fabric. One of the stores was Britex. When I was in there looking at lycra, one shade jumped out at me as looking VERY close to Zam's. I think there is a slight chance it could be 'the' lycra - but I have no way to really know unless I ever see the costume on display again and can compare it. Perhaps all they had to do was get it laminated onto neoprene rather than have it custom dyed?

Here is my swatch over the ZamIAm custom dye: 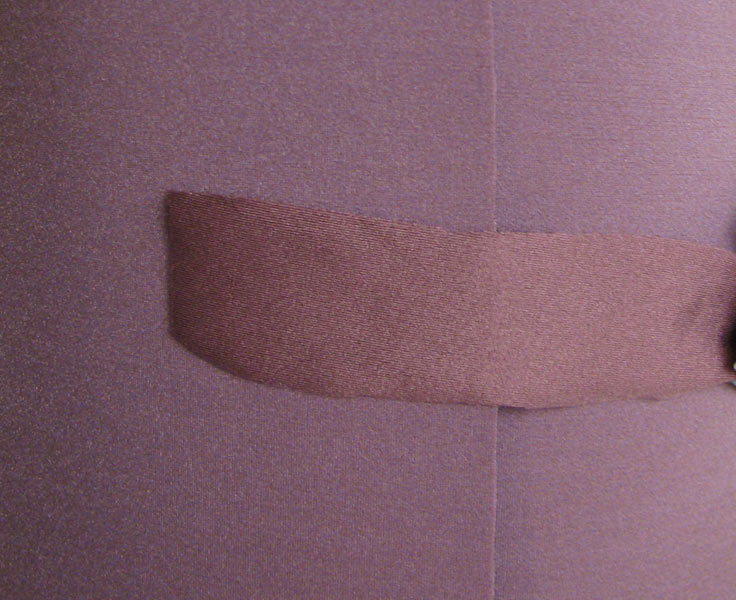 And ZamIAm in front of the real costume:

In any case, it is a fabric option if people want something close in color but didn't want neoprene (I don't really know that there are places that will laminate only one custom sheet - highly doubtful).
Last edited by a moderator: Mar 17, 2007

We didn't know this info about her shopping in stores in California! Wow. You might've hit the nail on the head! Maybe it is the actual color! Most people guessed or assumed that many of the places they got stuff was from Europe or Austrailia. As far as lamination, most places need a minimum amount purchase for lamination, and in no way would it be just 5 yard sheets. I had to cut everything down myself. Wow, could've saved us dyeing costs!

The bolt doesn't have color names. I think Trisha assigned that color description (which is a fairly good one).

I just knew you had all come to an agreement on the dye run for your fabric when I joined this group. You had stated in the forum that your decision was final on color - etc. So I didn't want to rock the boat by posting the lycra I'd found a few months ago. Now I'm thinking I should have

Anyway, yes - people at Britex confirmed for me Trisha had done some of her shopping there (I found this out after Ep II came out and I was looking for Padme fabric). There are photos of her in Dressing A Galaxy shopping in several Bay Area stores including Britex, Satin Moon (I found the Anakin EpIII tunic fabric there and the Son of Son's guys bought up all that remained!), and Stone Mountain and Daughter in Berkely. I'm sure she shopped at places around the world, but since Lucas Film is here - it would make sense she'd visit a lot of the stores while she was here meeting with Lucas!

Still, that's not to say that the lycra I found is the original stuff. (why oh why didn't they put an actual fabric swatch in any of the DAG books! A print of a scan is far from the same).It seems very close though.
Last edited by a moderator: Mar 18, 2007

yeah, The reason I stated that the color was final, was because anytime you go "custom dyed" it's different than predyed. With predyed, I'd have an actual swatch in hand to buy up or send to the dyeing company to match, rather than some one telling me, no, it's this color, it's that color dye, it more like this, no--more like that. Then you have everyone staring at their computer screens and saying well, it's more like this number on the color chart, no it's this number. All the while people adjusting their screen back lights etc, with different pc's and color resolutions etc. I didn't need to play color volleyball with people again, wasting more time. The difference in your scenario, is that you had a swatch in hand. Oh well, now we know, and hey the color that we have that was dyed~ not too far off eh? Your swatch does have more red tones in it much like the FIDM shots.

Kay_Dee said:
Let me preface by saying I'm not Unhappy with the custom Neoprene run. I think given that a pantone book was being used in probably a dimly lit exhibit, then lab dips were being done attempting to match a pantone guide & paint chip cards - she got really close!
Click to expand...

Thank you a million times over. Really. You don't know how much that statement means to me. This coming from someone who has researched padme fabrics like a hound, it means so much what you just said. The cross I've had to bear these many years just to hear that statement from someone, feels like a weight has been lifted off my shoulders. I can rest easy now. (Ok, i know I still have people I have to ship stuff to, but you get the point.)


Kay_Dee said:
Still, that's not to say that the lycra I found is the original stuff. (why oh why didn't they put an actual fabric swatch in any of the DAG books! A print of a scan is far from the same).It seems very close though.
Click to expand...

Tried that, bought the Dressing the Galaxy book for that very reason. Asked people who owned the book if they had zam swatches, so I could trade up if necessary.
I created another thread, "the color Purple", so that people can see the actual differences. Unfortunately, unless we worked for Trisha and got a swatch, we may never know. But enough with the negativity-- I am proud of what we've accomplished... Read other thread.
Last edited by a moderator: Mar 21, 2007

just another option if anyone is interested in one....

found this material...it is a lycra covered neoprene all made and ready...offered by a company out of New York that i found on the interent called stretchhouse.... 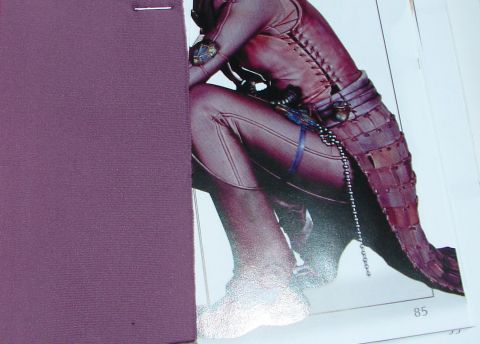 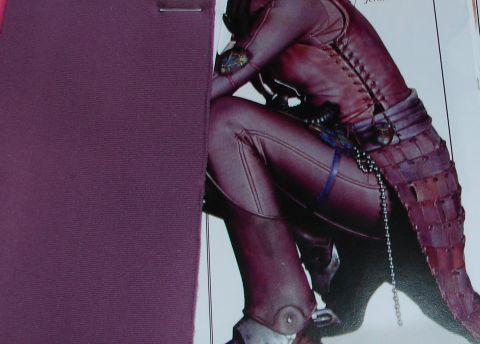 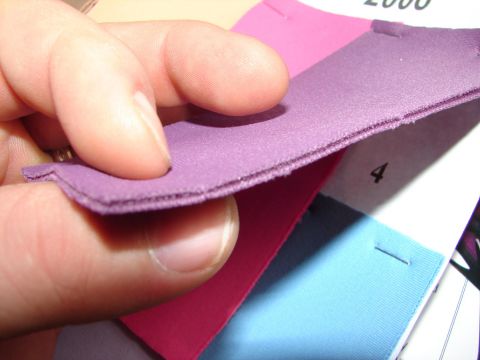 the top picture was taken with flash compared to VD...middle without same comparison, third with high flash to show lamination of neoprene and lyrcra

i bought 5 yards of it at 60" material for 180 bucks....and i think its really close...pictures barely do it justice and is better in person...it is also very thin so that makes for comfort as well as the "folding or bunching" of the material is more like the suit seen on screen...less "bulky".

to be totally honest im really not sure of the thickness...i was more attracted to the price and the fact that its a stock item..but it is very thin and gives a nice bunching effect that isnt so bulky
C

Hey JD,
Is this is place http://www.stretchhouse.com/neoprene.htm you got that sample? Was that the #4 color sample?

yup....it's not totally perfect, but it's very close and not that expensive...as long as you make sure all the other colors play off the suit it look great..i think most of us decided that no matter what we do, purple will never cooperate and the color just continues to change in every shade of lighting...most inportant thing is to be sure your colors are in the purple family and that they are all coordinated with each other
Z

Wow... that is pretty darn close. Admittedly, I'm a little gun-shy about using neoprene in humid Florida, but if it's that thin, I'd have to think about it again. Certainly looks quite a bit closer in color that what Seattle Fabrics offers.
I

Cressie said:
Hey JD,
Is this is place http://www.stretchhouse.com/neoprene.htm you got that sample? Was that the #4 color sample?
Click to expand...

That's the same stuff I got too! It only took it a few days to arrive.

You have to e-mail the guy at Stretchhouse to get him to call you to give him payment info...I was a little weary about that, but everything turned out ok.

You can also get them to send to a sample of it too.
C

Thanks,
I just got my sample from Strechhouse. I have to agree-it looks great for the price. Just one thing- It's extremely strechy for such thick material. You will have to use a serger instead of a regular sewing machine. I just got a new Baby Lock serger last December, so all I need to do is place an order. Finally, something i'm good at with this costume- sewing! Great neoprene find guys!
C

Just a little FYI,
The blue color (#8 on the sample and website) from stretchhouse is the perfect fabric for the 5th Element flight attandant costume! I just watched the movie and caught the fact that it was baby blue neoprene based on the way the material bends. Good to know
Last edited by a moderator: Jul 16, 2007

hey cressie....not sure if this matters but we made our entire suit on a standard $150 singer we bought from walmart...with that material...the trick is to pull it back slightly as your going through....sews real easy believe it or not...
C

I found perfect material to use