wow!
Have you ever done anything like this before dude? that's ace

actually no lol: I used my small experience with the greebs and applied it to the gauntlet...came out pretty good i thought for a first go at it...the hardest part was getting the leather on the cuff beleive it or not...

process was easy in the concept...I sculpted the full gauntlet and then put it into a cylindrical container that was just a tad larger than the piece...poured the mold material around the outside. when it was set up i cut the plastic bucket off then made a slice down the mold material from top to bottom in an area where i knew it wouldnt make a difference in the final cast and be an easy sand off if a line showed...I then put the mold into an identical plastic bucket and put a clay "arm" inside the gauntlet mold to save on wasting the plastic resin. I then poured the void with the casting material (a liquid plastic). Once that was set up the fun began...forgot to spray the clay which made for a real time getting it out of the inside! The inside also was still too thick, but i didnt want to go to thin. Dremmeled out the inside so it was a decent gauge thickness to fit Jamie's arm. The other tough part was cutting the spots for the hindged opening. My dremel cut off wheel wasnt deep enough so I had to carfully chisel the remainer by forcing a very tiny screwdriver into the crack and work it very slowly. once I had the "door" seperate, final clean up and sanding went faster...then some base of krylon fusion satin black and touch up with rub and buff...(silver leaf first, then pewter to dull some select spots and finally some roman bronze for the dirt and rust look) The hindge was actually secured with small computer screws that did pop out the back(pre-drill first to avoid a split)that I just filed off with the dremel and then covered with bondo.

The only other issue was the side greeb on it...I casted it way to big and had to dremmel the whole thing down and redetail it with a small pointy dremel bit. We will be installing two earth magnets in the opening to have it stay secured while wearing it...like you, im starting to like magnets for certain things.

I'm sure the second gauntlet will come out a bit better, but that too will be a whole new story with the cuff section. The worse part about doing this stuff is the cost of the tinsel 70-25 mold compound....its in the area of 120 bucks shipped to have enough to make the molds for the two gauntlets and maybe a couple greebs...thats the scary part...pour the mold on faith and hope it works out cause it can be real expensive if it doesnt... we've been lucky so far.

so with the right gaunt finished...i was able to use the old sculpt for that to sculpt up the bottom part of the left gaunt..once this is casted, I'll make the top cuff section for it...

I learned from the first sculpt and cast that it is easier to make a deeper cut into the clay for the hinge cut out line to make it easier to cut ofter casting...I also decided to spend less time smoothing as the liquid plastic im using sands smooth pretty easy...especially with thin one as there are less areas that are not flat on this gauntlet. The detail scores are deep enough so when i sand the sides they wont disappear.

I must give kudos to moncal as i used his gaunt sculpts as my reference while sculpting Jamie's. They were very valuable resources in his pictures to go by....thanks!

so along with everything else to get things together for dcon...i was in the process of cleaning...or attempting to clean Jamie's pants after our fiasco...and said to myself...what am i doing....

went and grabbed the extra material and made her a new pair of pants this afternoon...it was kind of a mixed blessing that the other ones got messed up...I was able to correct the angle of the inside saddle area by the knee...the first pair was too right anglish for me...so i dropped it more off on a 60 degree or so angle and it looks much close to the right angle now...so Jamie has new pants befroe she was even able to show off her first pair...lol:

Wow... you've been busy! I've been outta town being lazy and you've been working! Great work there on those gauntlets! Looks like you're gonna be good to go for DC! Congrats!

was wondering where you disappeared to

ya been busy trying to tie up some loose ends..but ya..we should be ready for dcon...be looking for ya! either in my maul or walking with zam...or bothlol:

we actually found a shoe guy to finally install the ever elusive speed lace boot hooks...nice job and they are totally accurate...looks awesome...post a picture later of the belt with the new hooks...only cost us 16 bucks...a dollar per hook i guess

Yep... went up to Washington state to cool off! Visited some family but didn't have any internet connection... *That's my story and I'm sticking to it! *

Hope to get my pirate costume done... *sighs* But will be on the lookout for you and Jamie!

finished the sculpt for the gauntlet cuff...need to order a bit more mold compound though...ran a tad short :roll: another 80 bucks i guess wont hurt!

also pictured it our finished up cummerbund belt...Jamie took it into Worcester and stopped by a cobbler who installed the antique boot hooks for us! man that was a tough thing to find... 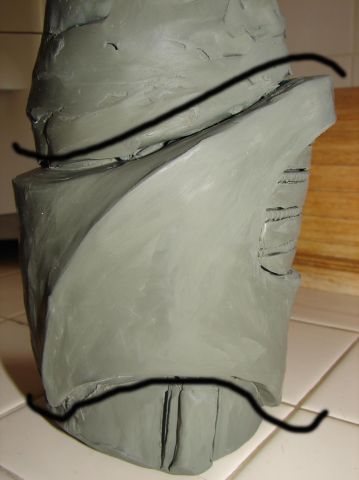 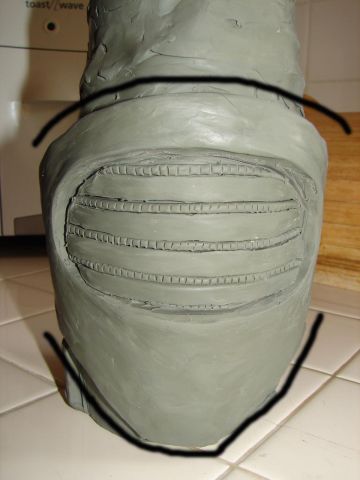 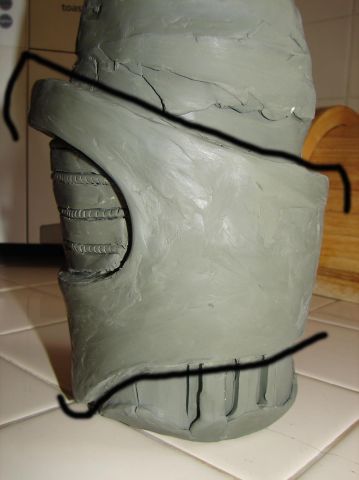 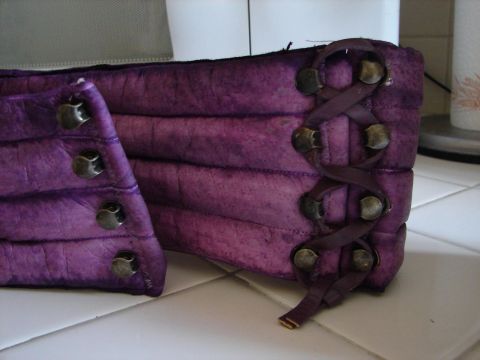 and here is the left gauntlet minus the cuff top..which should be done by the end of the weekend 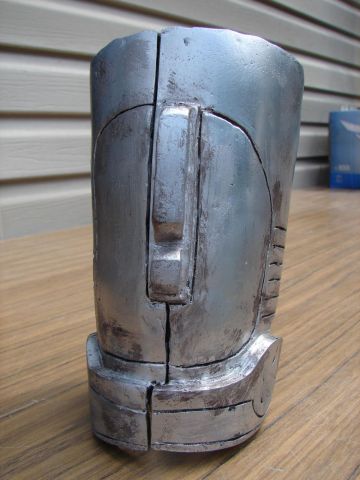 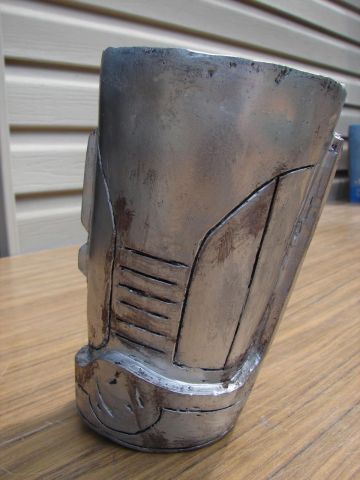 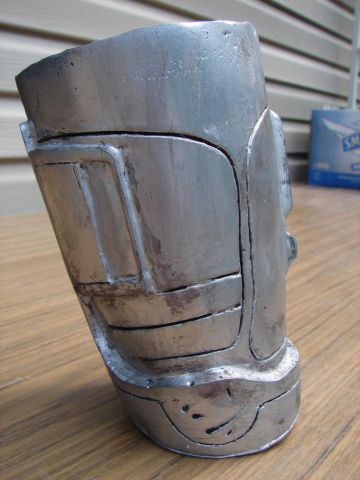 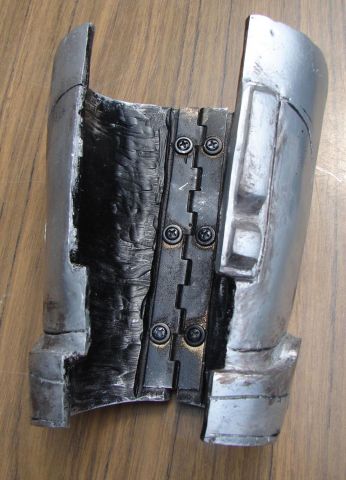 it should be noted that i really didnt worry too much about the smoothness of the overall gauntlets as they seemed to be pretty banged up and weathered...figured the imperfections would add to the look as well as the speed of completion
S

Those eye hooks are great too. Nice find.

You'll hav eto let us in on the process. As i haven't got a clue, LOL
S

i kindof mentioned a bit of the process in a post up above...if you want to email me for more in depth info feel free...i love to pass along information...the more to help the better i say..

here is the belt finished up with all greebs attached! 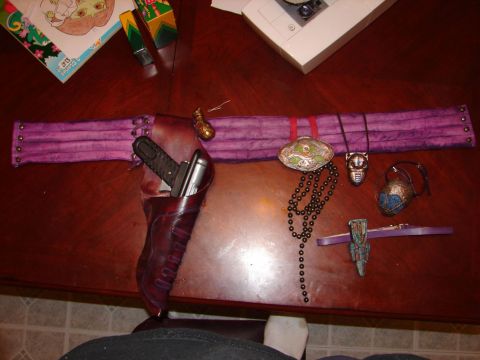 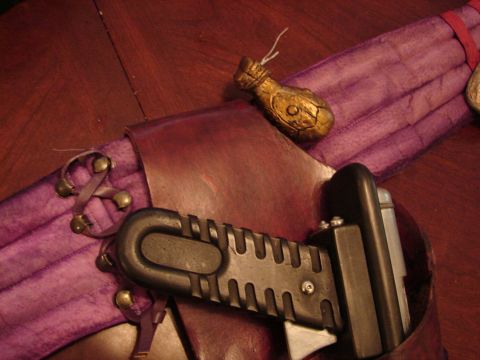 and some geeb close ups... 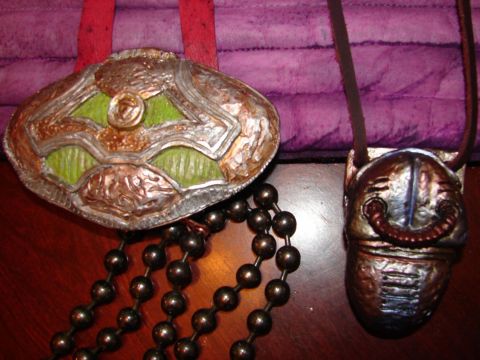 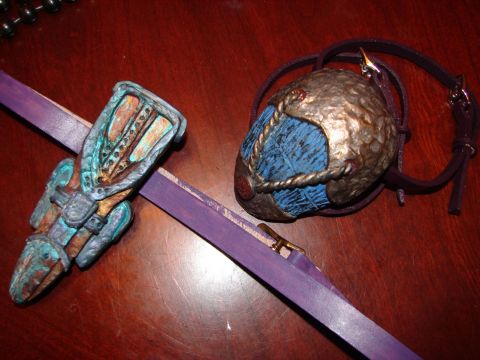 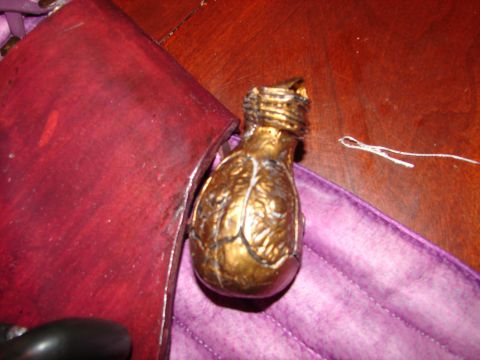 now if the darn tinsil 70-25 molding silicone would only come in i could finished the final gauntlet cuff and we could be done with this crazy costume!

got the stuff just now as i was typing...will be able to finish the cuff tommorrow! pictures to soon follow!!!

We also managed to find some decent light colored suede too and i finished a new veil and cape yesterday...
B

JDFett said:
got the stuff just now as i was typing...will be able to finish the cuff tommorrow! pictures to soon follow!!!
Click to expand...

Gee, has it really been eight years? Bumping this thread too, lots of great info here, including the rifle.

I know....it amazes me every time I read over this thread. I was always proud to be known as one of the fastest zam builders at the time....and still having a costume that was quality enough to win both best bounty hunter and best overall costume a dragon con that year
B

So, since you're here, I wanna ask... On the greebly to the right that I ordered from you, why doesn't it have the top part the leather straps go through?

That I found was easier to make cleaning that piece off completely and epoxying a small leather piece to the back, extending it and squaring it off to match. Then punching holes in that to feed the leather through.
That worked for me and its actually what you see in that final piece. The casted part I dremelled off as it casted really thin and just seemed more secure with the leather piece.
I used a heavy gauge leather and painted it to match the rest of the piece

Ahhh... okay. That makes sense. I've been playing with JB Weld to make it look right.

And after dum**ss question #1,2, and probably a 3rd one in there at some point, I didn't want to bother you again about it. I think, after seeing a few better images, I'll stick with the JB Weld, but am going to remold it better to look right. A drinking straw makes perfect holes for the leather to thread through and it holds pretty tight to your resin cast.

Dont ever feel bad about asking question regarding anything with zam. If I can help you make a great costume via answering a couple question that makes me happy. I dont have all the answers but ive done my share of costumes over the years, quick count is 11, so im always glad to help if I can