My Budget Zam as well...

I thought I would post a few pics of my budget Zam as well, which was designed almost entirely after the 12-inch doll. Sorry for the poor quality...the pics look they were taken in the 1960's. :wacko LOL.

I've since modified it a bit and added the binoculars. 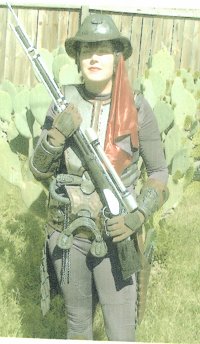 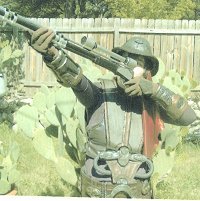 Out of interest, what did you use for your helmet?
C

Yippee!!! Another one!
This looks great! How did you make the arm gauntlets?

very cool...the pictures do look almost like Zam going back in time to the roaring twenties..LOL would like to see some better shots of this

I think that is awesome for being a budget Zam!!! Wow!! And making it all yourself.... Need to post some pics with the new mods!

I'm looking at the picture and figuring you must live within a few hundred miles of me! Prickly Pear and those type fences are kinda standard in Arizona!
M

***
Thanks for the compliments! The helmet was actually made by a friend of mine. We used Judz Dwed's method of using an old army helmet liner for the base, cutting out the sides, taping them closed again, and then filling them in with bondo. The brim is made of pvc sintra.

For the gauntlets, I actually used some old Star Wars cups I had laying around, and cut out the bottoms. Then I sculped out the details with Super Sculpey clay and baked them right onto the cups. I used Liquid Lead to kind of "grout" the pieces in place so they wouldn't pop off...and I then painted them. I have since added vinyl over the "cuff" parts.

The greebs were made of super sculpey as well, and the rifle was a toy from H.E.B. I added some extra length to it with pvc pipe and craft sticks, and I used two aspirin bottles for the scopes. But I'm gonna make another one ~ a few feet longer this time.

So, that's my Zam. I'll post some better pics in a few weeks.

LOLing at the Roaring 20s Zam. 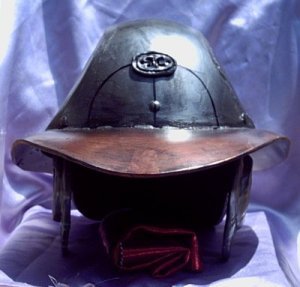 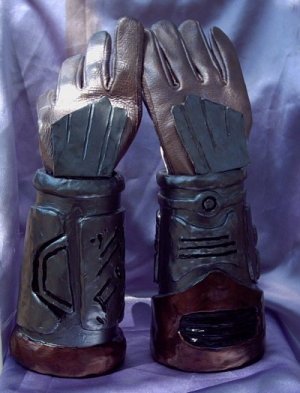 what a great idea for the gauntlets, but at what sacrafice...old star wars cups? ooooo.....i cringe at the thoughtlol:

hey i also noticed that either the pictures are reversed(flipped horizontally) or you are a left handed zam...(holster position)
M

JDFett said:
what a great idea for the gauntlets, but at what sacrafice...old star wars cups? ooooo.....i cringe at the thoughtlol:

hey i also noticed that either the pictures are reversed(flipped horizontally) or you are a left handed zam...(holster position)
Click to expand...


***
If I recall correctly, the Star Wars ingredients I used were the cup "bodies" of Captain Tarpals and Jar Jar. But, I kept the "toppers" cuz those are the important parts ~ and I collect those.

And, yep, I'm a left-handed Zam. Not too many people notice that. 8) I thought about arranging it the "right" way for a second, but I knew that would have driven me loco, so I kept it real and stuck with my "south paw draw" instead. lol:
***

hey, a good Zam you have there...and you know, you are not the only left in this universe, I'm a left Boba....jeje
I have change the stock in my Blaster, to be a left-handed one...but tssk, it's a secret, that no one have see it...
LEFT-HANDED RULE!!!!

Melli Offee said:
If I recall correctly, the Star Wars ingredients I used were the cup "bodies" of Captain Tarpals and Jar Jar.
Click to expand...