TL;DR: is the blue on my jetpack too dark? Does the Pantone reference seem correct? Is there a Rust-Oleum spray paint that'll work better?

Now that I'm looking at Halloween 2022 to unveil my ROTJ Boba costume (hopefully some kind of "con" before then), I'm thinking about redoing the blue on my jetpack: 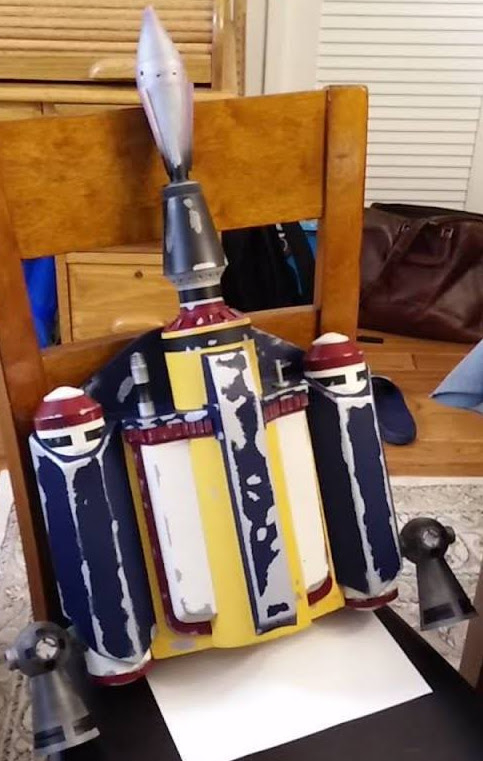 That picture came out a little wonky; the yellow is a little darker (more orange) and the blue isn't so "purple" in color, but it is a little dark. For reference, here are the exact colors I used:

I painted the jetpack last, so most of the colors were reused after paining other parts of the armor. I think the red and yellow matched the Pantone colors well.

I know there are variations in costumes and in the cameras that took the pics, but it feels like Boba's jetpack is more of a turquoise/cobalt color than the Pantone reference above.

I've been intentionally sticking with Rust-Oleum spray paints with a satin finish, just to avoid any reaction between brands. I think Testors might be OK too (since they're part of Rust-Oleum now), but I haven't tried Krylon. I'm also OK with a gloss finish as long as the satin clear I'll put on afterwards will dull it enough.

Is there a blue Rust-Oleum spray paint you'd recommend you'd recommend for your ROTJ jetpacks? Deep Blue or Ink Blue seem like better choices, but there are a lot of others. I also know now that I can darken the color a bit by misting on flat black and/or applying a blackwash of acrylic paint.

Anyway, sorry to ramble on, but if you've read everything so far thank you! Just looking to consult the experts here before I buy more paint and respray the blue.

TDH PREMIUM MEMBER
Bob A Feet
I was like why does that Pantone pic look familiar. Then I was like.....I did that! Hahaha! I used MS Paint to toss in screen grabs and modify a just a little bit to conserve/consolidate space.

But yeah to expand on this the 501st even had "Names" to their color list for that blue, which were.... 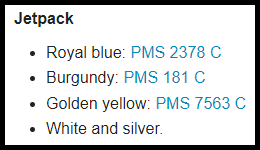 They call it Royal Blue. As you may recall I have two ROTJ Packs. One I got because of budget constraints, from Coz3D. And the other one, which I'm STILL painting up, from Boba Maker, just took a break from it. I'm in a different scenario because I'm using ALL airbrushes on my stuff. On my Coz3D version I used Humbrol Matt 104, Humbrol calls this color "Oxford Blue". Now if you know me, I dislike mixing paints. I like to use the paint right out of the jar, so I try to come as close as I can when choosing paints. I may add in a few drops of black or white depending if I need to lighten or darken it a bit, but that's it. And in this case I didn't use any alteration of it. and here is how my Coz3D came out. 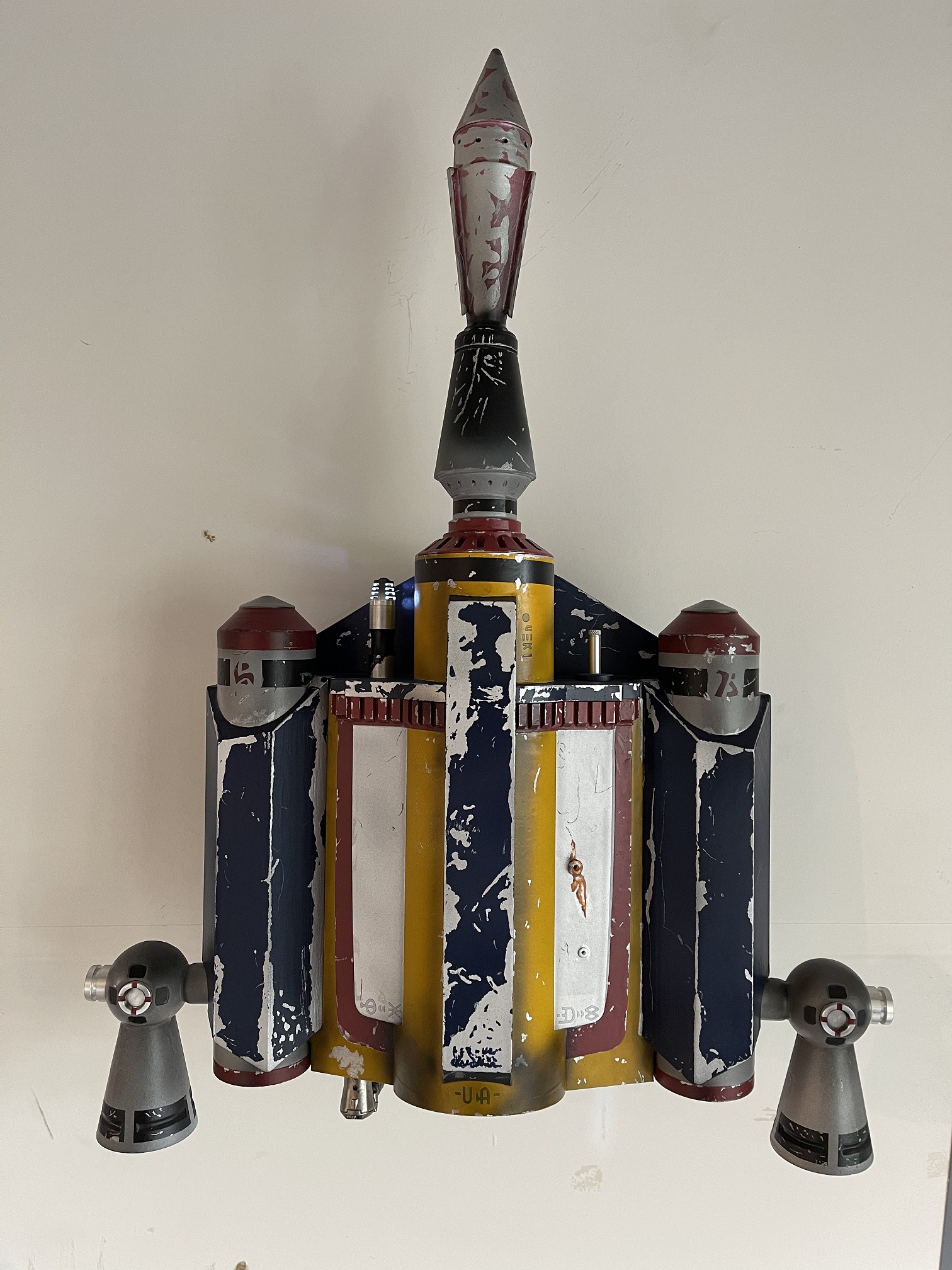 For my Boba Maker Jetpack I used Tamiya Color paint number X-3. And guess what? Tamiya actually calls this "Royal Blue"! Now for this, so far I haven't finished it, but here it is with the Tamiya color on it. 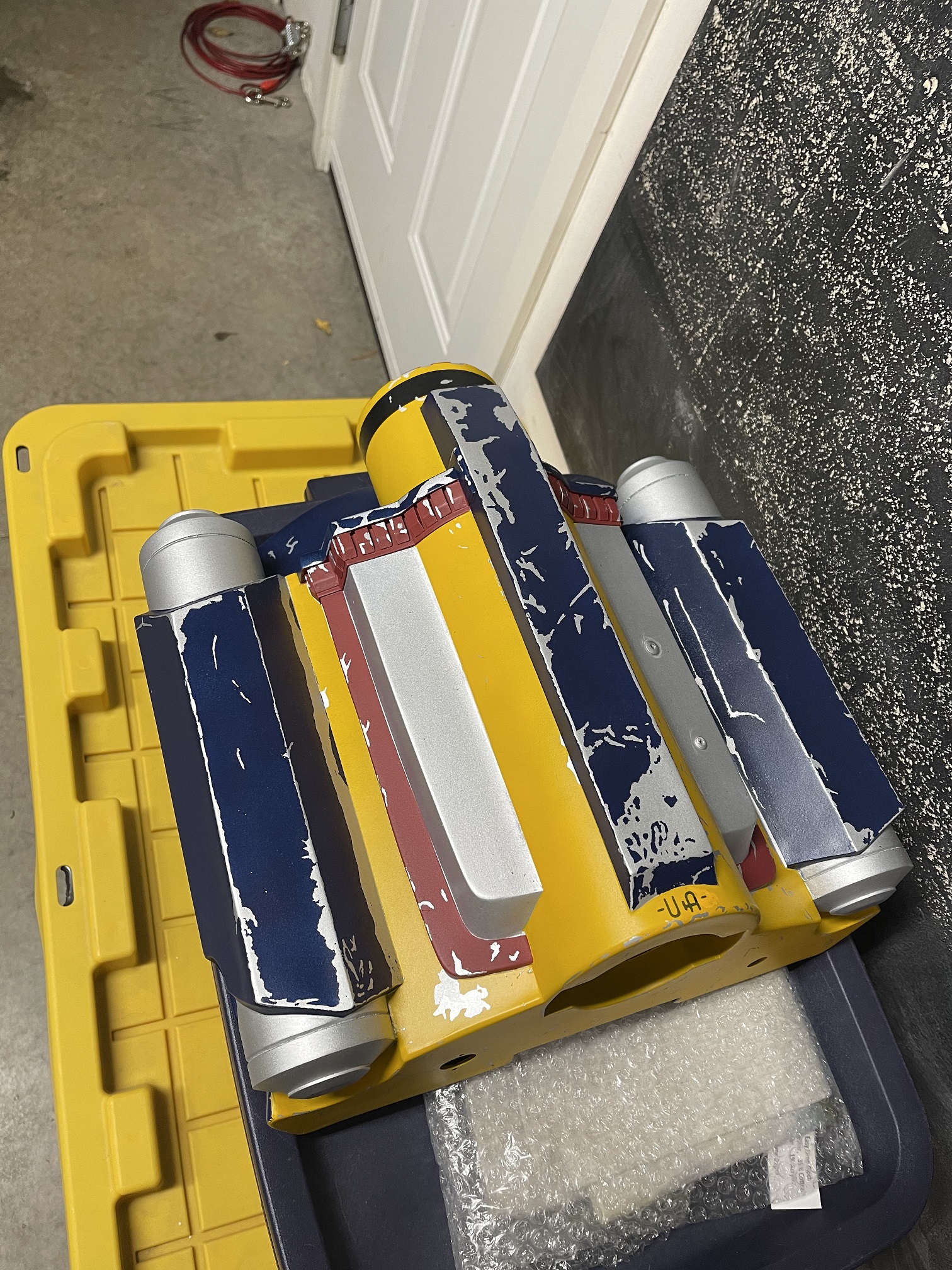 Both blue colors almost look the same to my eyes. But like you said the cameras, lighting and other effects could have adjusted the color not only on your camera of your JP, but also on those reference photos.

Thanks for the detailed reply Irongladiator!

You might've just convinced me not to repaint the blue on my jetpack, lol (which is a good thing I think)

Looking at my jetpack in-person, the colors look a lot like yours. Mine is maybe just a little darker still, but I can live with that.

At least for now If I have more time down then road maybe I'll consider repainting it, but I've got armor to make up before then

TDH PREMIUM MEMBER
Bob A Feet
Glad to have lent some assistance. I was happy with the paint I had on my Coz3D pack, but I went with a different paint because the humbrol was an enamel based paint and, for me was incredibly hard to shoot through my airbrush. Not wanting to go through that again, I chose Tamiya X-3, which again looks pretty dang close to my eyes.