While browsing through some Fett pics for comparative purposes, I noticed something that I had previously overlooked. Check out this still from Chronicles:

Now at first, I thought what I was seeing was simply an ROTJ stunt helmet, which is still an exciting find for me. However while comparing the weathering marks, I noticed an ESB white "decal" (decal not necessarily meaning sticker) on the left ear-piece. Also note the helmet "stripes" are yellow. And the weathering on the helmet matches an ESB helmet. Soooo there ya have it folks!

Hey Tyler amazing find. Can we see the entire still to get an idea of which part of the film to look for it.
Last edited by a moderator: Jul 24, 2017

That's where Boba is jumping off the sail barge...I'm not sure you see that exact shot in the movie or not (someone has my movies at the moment ).
Last edited by a moderator: Jul 24, 2017

Well it's clear Boba wanted to die with his best looking helmet on, so he switched real quick.
Last edited by a moderator: Jul 24, 2017
B

OOOOOOOH! Tk-Fett and I were chatting a little on this topic. TK brought up a good point.....can Team ROTJ claim this helmet as theirs now?:confused
Last edited by a moderator: Jul 25, 2017

That's exactly what I am going to check when I get the ROTJ dvd in. Max is right on. It's the still in Chronicles when he ready to jump off the barge. I'm curious to see if it pops up again anywhere in that scene.


MaxPlague wrote:
That's where Boba is jumping off the sail barge...I'm not sure you see that exact shot in the movie or not (someone has my movies at the moment ).
Click to expand...

The detail isn't very visible, but this helmet might also be an ESB-styled helmet. 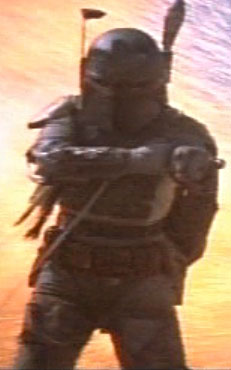 Community Staff
Tyler, fantastic find! However, I wanted to point out a few things... First, that picture is not in the movie. Perhaps it was an early idea for having JB run across the deck of the Sail Barge to take off whereas in the final cut we seem him take a few steps and then the Jet Pack ignites. Second, after checking out a number of clips of that scene, I can't see the ESB helmet anywhere although at times it is too blurry to see. However, I don't think the ESB was seen in RotJ until the SE. Still a fantastic find although you have to ask yourself why such a devout ESb fan was looking at RotJ refs....
Last edited: Jul 24, 2017
M

Since I don't have a copy of the Chronicles (yet), what year was it printed (before or after the Special Editions)? If it was after, then this is my theory. As most of us know, the ESB helmet was used in the added scenes of Fett. I suspect that this was possibly a shot from a scene they were going to add to RotJ/SE, but ended up on the cutting room floor. As BB noted, there is no conclusive shots in the original RotJ of the ESB helmet.

Hey man, I'm thinking that might be a stunt suit after all. Look at the left gauntlet, looks kinda funny to me. Also, he seems to be missing the cloth belt pouch on that same side. Does anything else seem off?
Last edited by a moderator: Jul 24, 2017

I just got the DVD's in today, and I'll have a peek myself. Though I am not expecting to see the helmet in the film, anyway.

Funny you should mention that point about the Chronicles book, BF. I was wondering when it was published for a slightly different, though related, reason. While gathering more information about the "additional weathering" on the AOSW -believed ESB Hero- helmet, notice the page that has Fett in a close up from the Executor bridge and two shots of the helmet on a pole to the right. Well, the two helmets in those photos are the same hero helmet, except that the helmet on the pole has the added weathering to the hero. My best explanation is that the scratches were added for the SE. So would that mean the photo is from the SE, meaning that there could possibily be SE content in the Chronicles book?

About the suit, you can see the left gauntlet practically half-open. And if I am seeing the picture correctly, is there a button closure on the visible ammo pouch? Didn't the SE suit have the ammo belt with the button closures, ala ESB?
The helmet is not the SE/ESB hero, though it could very well just be a stunt ESB.

And as much as it pains me and makes my eyes bleed to see ROTJ stills, I have to remember that ESB can learn from ROTJ, and ROTJ can learn from ESB. We're all chasing the same character. I just can't help it if your suit is butt-ugly.
Last edited by a moderator: Jul 24, 2017
E

I've got Chronicles at home . . . I'll check the publish date on it when I get back if no one else chimes in before then.

It would be ABOUT the time of the SE's but . . . just going from memory, I don't RECALL there being any SE content in it, but, it has been awhile since i've looked through it.

I have both versions, I first bought the Japanese version, then I got the USA version so I could read it.
Lynn
Last edited by a moderator: Jul 24, 2017


micke wrote:
Maybe it's from a stunt-shot when he crahes into the sailbarge?
Just an idea..
-Mikael
Click to expand...

Mikael,
You are right on. When they built the barge the only finished one side. If you look at the still he is heading towards the barge not away, and is standing on a spring board. This picture is most likely the stuntman jumping into the barge.
Mike
Last edited by a moderator: Jul 24, 2017
R


MaxPlague wrote:
Hey man, I'm thinking that might be a stunt suit after all. Look at the left gauntlet, looks kinda funny to me. Also, he seems to be missing the cloth belt pouch on that same side. Does anything else seem off?
Click to expand...

Either, it's rubber, and wobbling forward...or a cut + paste altogether. Too cropped and faded looking.

Are there any other Fett pics like that in yer chronicles book?
Last edited by a moderator: Jul 24, 2017
R

I just watched ROTJ again, and still-framed the "bounce" scene. Definitely looks like the ESB helmet, and the pack is rubber. Everything falls apart when he hits the barge. Looked like he could have been hurt by the rocket hitting him in the back of the head, too.
Last edited by a moderator: Jul 24, 2017

Rodann, I have to agree with you. After watching the "take-off" from the barge scene to the "land on the skiff" scene, before the Luke cutaway, I believe it is an ESB helmet. And you can see that same rubbery, crooked-ass tip on backback that is in the Chronicles book.
Last edited by a moderator: Jul 24, 2017

The real question here is....