It DIDN'T ignite. Watch it again, frame-by-frame. The "ignition" was animated. Poorly, I might add.
Last edited by a moderator: Jul 24, 2017
M

Did they have any stunt helmets for the ROTJ helmet?
I've only seen 1 stunt helmet and that's the one in the Lucasfilm archives book. Perhaps they just decided to use that one. people don't really notice it's brief appearance anyway..Except for us geeks

The Jet Pack is in Steve Sansweet's possession i believe. I recall some photos on his site and the text stated it was a stunt version..I'll check it out.
The ignition was animated on i think.

which ignition are you talking about being an animation? In the bucket head it shows fett attached to a cable and a small explosion takes place and they lift him via cable. Also, notice his right gaunt his just tape up with electrical tape. Either this was right before a unused stunt, or it's just a last minute publicity shot before they took off the gear.

Check out the pic of him hitting the skiff. His rocket is bent beside his helmet.

I love that pic too. I was thinking, we weather our gloves by leaving them in the sun. You guys think the ESB gloves weren't stolen with the suit and they just faded in Yuma? Random thought..
Last edited by a moderator: Jul 24, 2017
M

Blastech: The ignition when he takes off from the sailbarge.
The scene with the explosion..maybe you refer to the scene were he lands on the skiff?

BTW, the ESB stunt seems to have a pretty big crack on the right side in the lucasfilm archives book..If you look carefully it looks like it's a crack in the same spot:

I would believe they used the ESB stunt helmet in ROTJ.
Any opinions?

The paint/weathering on the ESB stunt is different than the ESB helmet in the ROTJ still. However, you noticed a good point about the ESB helmets. The AOSW ESB hero helmet also has a crack in the same spot. That particular area on the helmet seems to be a high stress point, since we have seen pics of two helmets with the crack in roughly the same area- and possibly a third.
Last edited by a moderator: Jul 24, 2017
R

The gauntlet may look funny because the pic was taken without a flash, with motion. That will create a blur. Also, the Chronicles was definitely published before the SE, though there is *one* reference to the pending SE somewhere.

Just found it. In the part just before the Holiday Special, they tell about deleted scenes from ANH, and mention the Jabba scene. "A new version will appear in the Star WarsL Special Edition." This may have been before they even decided to do SE of all three for all we know. Definitely no other reference to SE though.
Last edited by a moderator: Jul 24, 2017

what the hell is going on with the "Extra antenna" near the rangefinder in the right hand picture posted by Micke just above a bit?

Here's the link in case it's too much effort to scroll up.

Can I put one on my ROTJ bucket, (I'm a sucker for extra gadgets and gizmo's) or is it just broken. Looks like the extra bit is the usual RF angle and the actual RF is bent away from the dome a bit.

Other side of the helmet near the RF, BF. I was wondering this too.
Last edited by a moderator: Jul 24, 2017

It's part of the stalk that has broken out. It could indicate a cut-away section of the hollow stalk to allow for electronics.
Last edited by a moderator: Jul 24, 2017
C

Looks like an other appearance of the infamous ESB in ROTJ. And this helmet DOES appear to be in ROTJ.

It's a little tough to see, but you can see it in the scene after Luke swats Fett in the Jet Pack with the saber. This helmet has the right side damage and "cats claw" damage to the upper right part of the dome that is seen on the ESB helmet. More weirdness.... 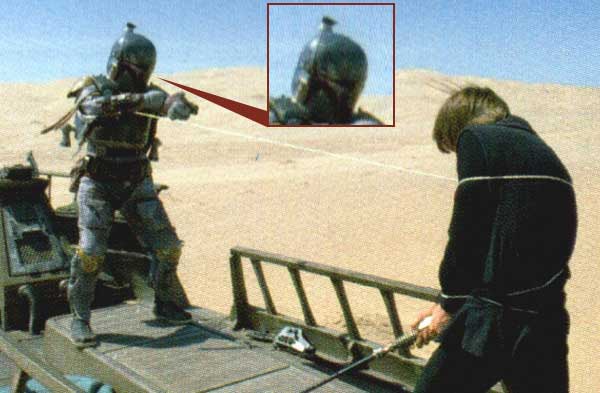 What's goin' on with the gaunt hoses in that pic? They look out of control!
Last edited by a moderator: Jul 24, 2017

Nice spot, Ego! But what I think you are seeing is a shoulder braid that has fallen off his shoulder. It's still a unique occurance to be sure!

Yet another ESB FPH2

In the market for an ESB helmet.