Thought it would be similar to the sicde ones, just had to ask the dumb question though...

what about the threads. how do you get that in all of this. great post of pics.
Last edited by a moderator: Jul 24, 2017
C

I've been digging around in the hardware stores looking for the parts for the gauntlet, and I thought I'd offer an update here. I wasn't able to find the female to female connector that's listed above, but I did find this one:

Note that it wasn't in the plumbing aisle with the other brass fittings. It was a connector over with the air compressor parts. Good luck, all. And thanks for the useful information here. My gauntlets are coming along nicely. 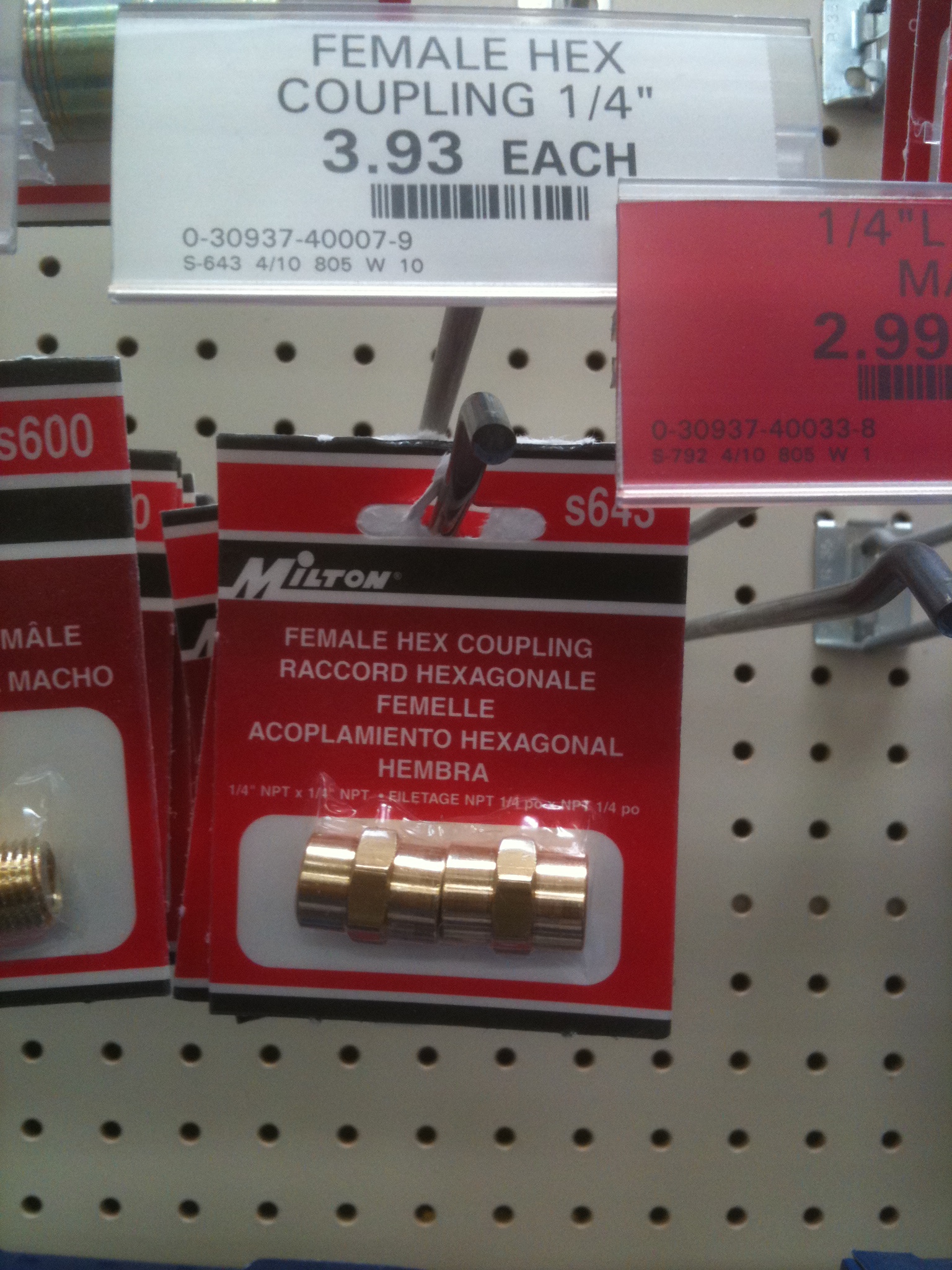 My local Ace Hardware has all of the necessary pieces -- flare nut, female-to-female connector, close nipples, tubing in all materials, braided hose, etc. And all in the plumbing section, too (well, the brass and steel and aluminum tubing is a couple aisles over in hobby supplies, but...). What I need help with is measurements. I'm working now on a set of ROTJ gauntlets and my own custom ROTJ-inspired gauntlets. The WOF templates have the center and side tubes 1/4" in diameter, not 3/8". How certain are we of the measurements on the original costume piece? Which should I go with?

1/4" tubing fits nicely within 1'8"-sized fittings (since tubing measures o.d. and pipe fittings go by the pipes' i.d.). A little bit of epoxy to build up the tubing would get a tight fit from the 1/8" nipple, that threads perfectly into the connector, plus the second nipple, which threads perfectly into the 1/4" flare nut. I'm using a short piece of flared 1/4" copper tubing in said nut to glue the hose onto, and this way I can actually unscrew the hose connectors from the gauntlet hardware.

I'm likely going to build up connector assemblies in both sizes and post pictures to have you guys evaluate which looks better/more accurate. I want to get my friend's ROTJ gauntlets as perfect as I can, and I have no problem going with the rejects from that for my own custom gauntlets.

Follow up. Stand back -- I'm going to try Science!!

Hokay, first of all, I poked around until I found a very useful reference image. This is one of Gino's, taken at MoM, with laser calipers to nail down some size referents.

I cropped it and printed out the relevant portion, measured between the two closer dots, scaled it so they'd be exactly an inch apart, and this is the final version, as close to 1:1 scale as I can manage, really. There's some distortion due to the wrist end of the gauntlet being farther away from the camera -- that far dot is supposed to be six inches from the first one closest to the elbow end, but it's off by about a quarter of an inch. When I juxtapose it against Alan's pretty-darn-good template, you can see how the distortion gets worse toward the wrist: 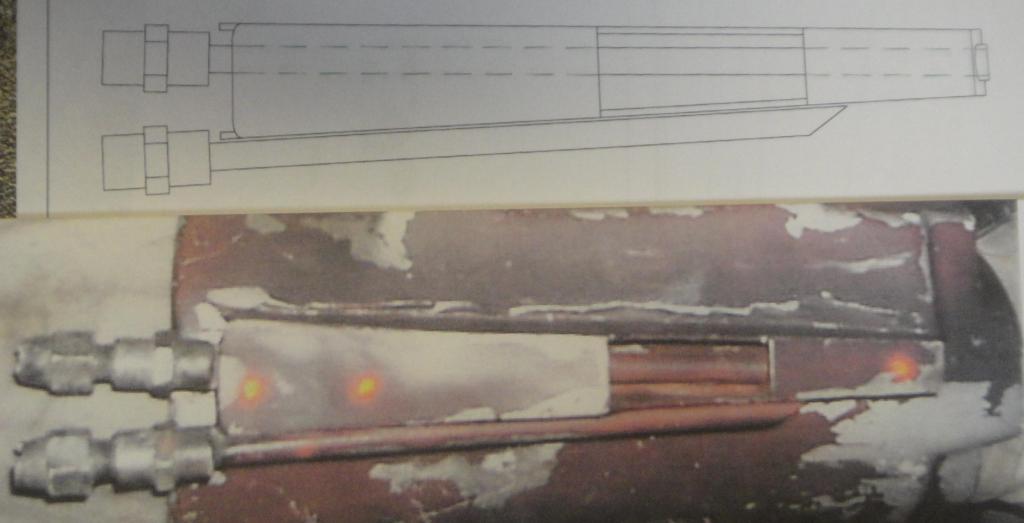 Fortunately, we're looking at the other end.

Okay. The tubes inside and alongside. Alan was right in making them 1/4" in diameter:

Those hatch-marks along the edges of that ruler are 1/16" increments. 4/16" = 1/4". So that means the fittings I'd gotten that are optimal for a quarter-inch tube are literally the best fit, but how do they stack up against the fittings recommended in this thread? 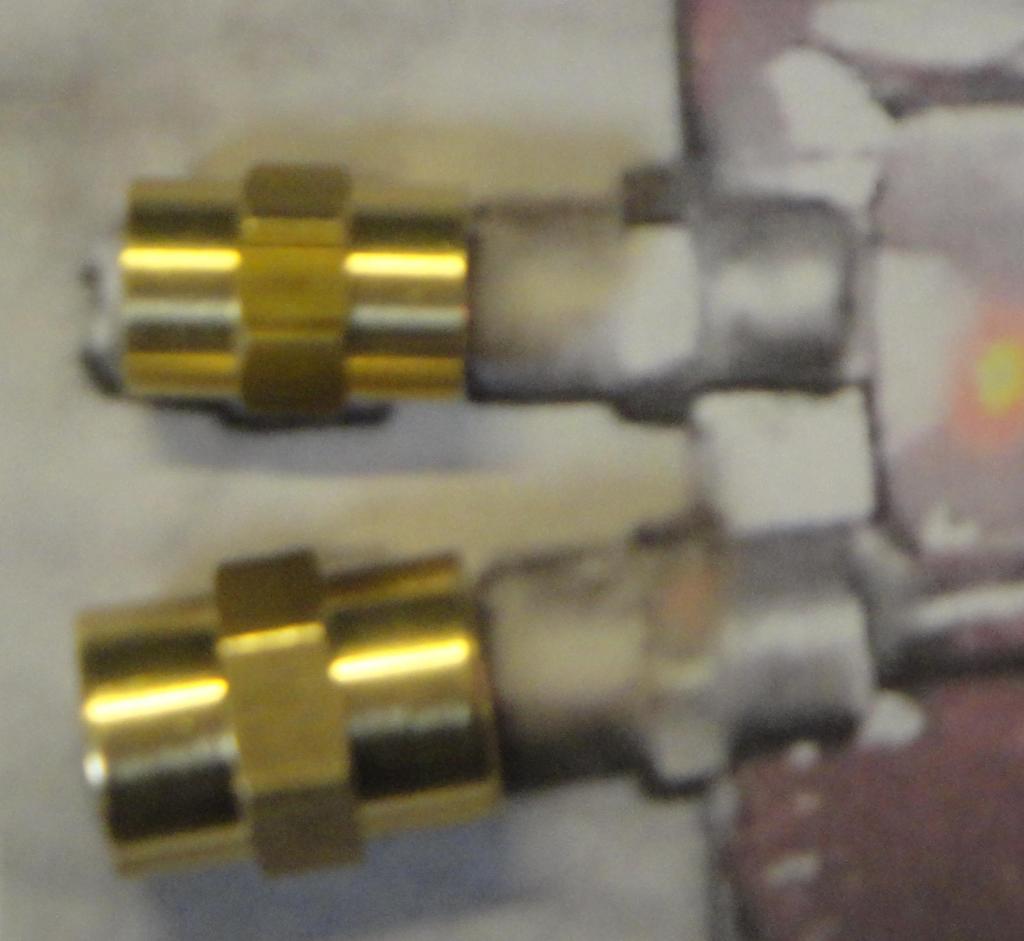 Here's how they look alongside, to compare relative lengths:

The hex knurl in the middle is a little wider than on the original pieces, but not egregiously so. The 1/4" coupling is a better match for overall length, but is off in the other measurements.

Here are the 1/8"-pipe and 1/4"-pipe close nipples (never get tired of that -- I am apparently twelve years old...), respectively: 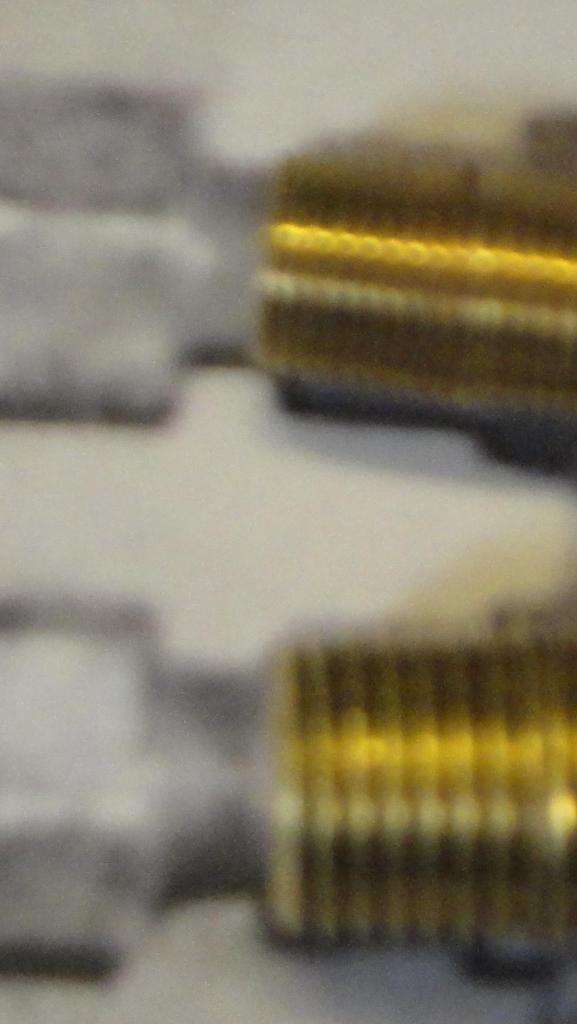 Even the 1/8"-pipe one is too large in diameter. I may grind the threads down a bit to make it a better match -- leaving the threads that will actually be needed, of course. 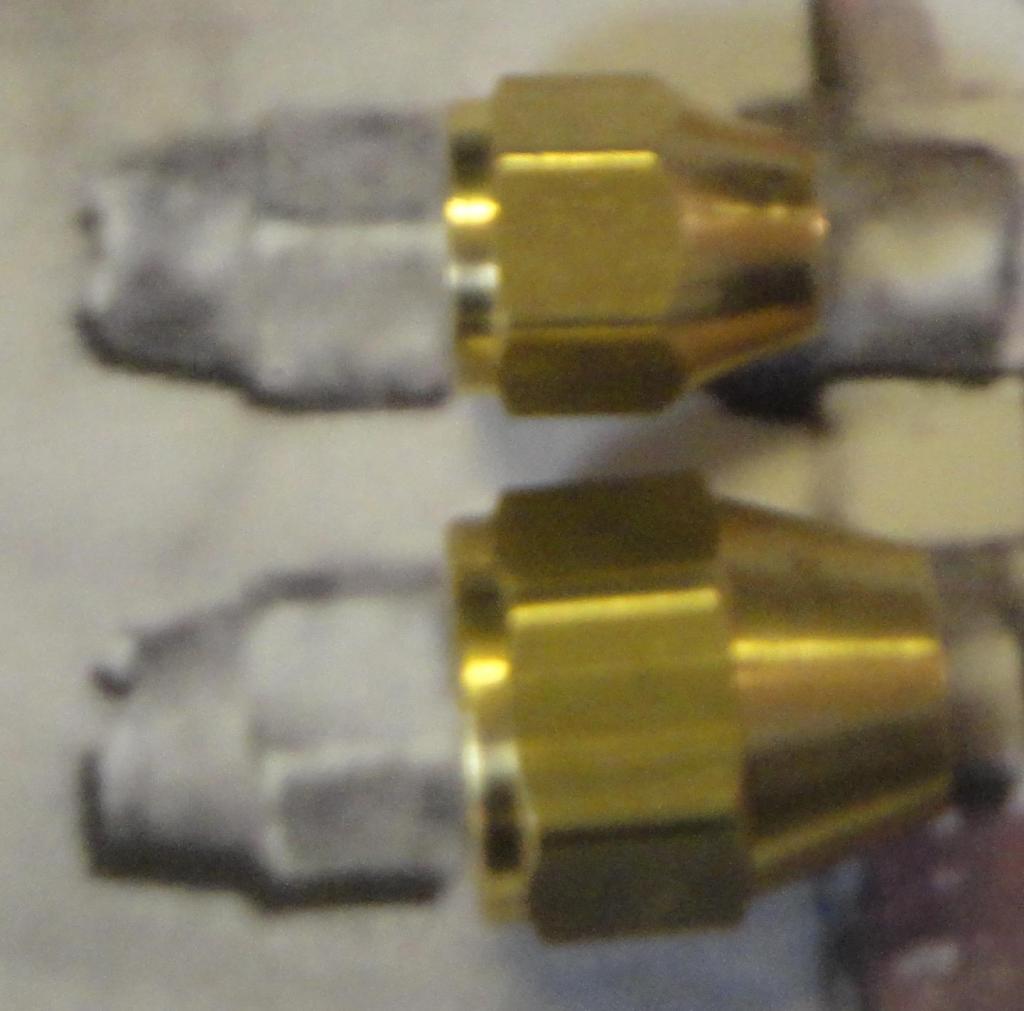 Moreso when it's up on a corner, as the one in the photo is: 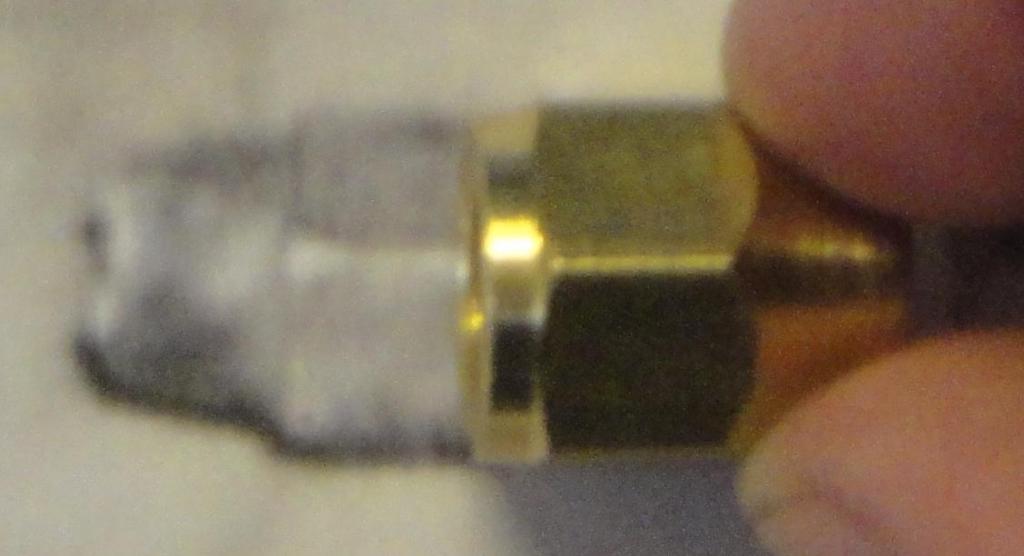 Even the 5/16" nut is significantly larger than the original: 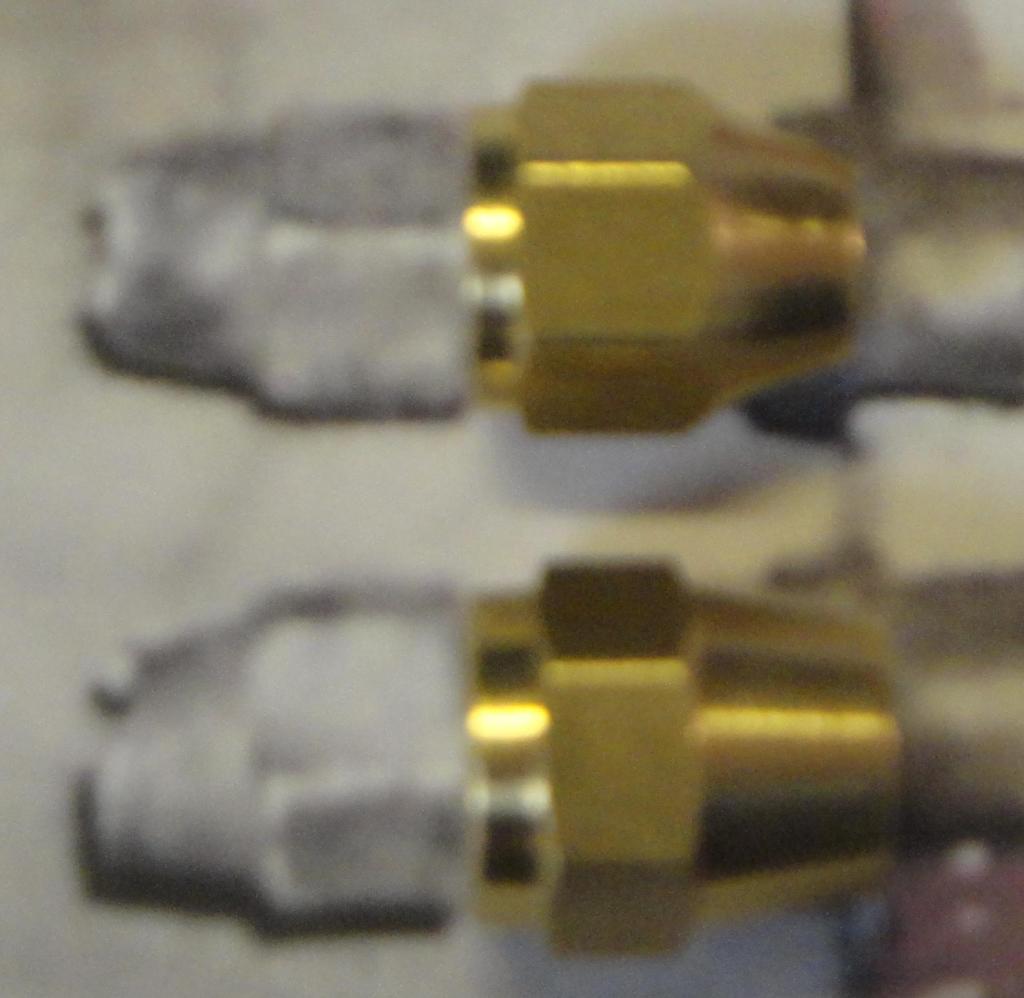 I'll have to grind down both ends of the nut to make it a better match to the original part, but that's no biggie. A last view of the fittings I got mocked up in place and compared side-by-side with the photo of the original in the same scale: 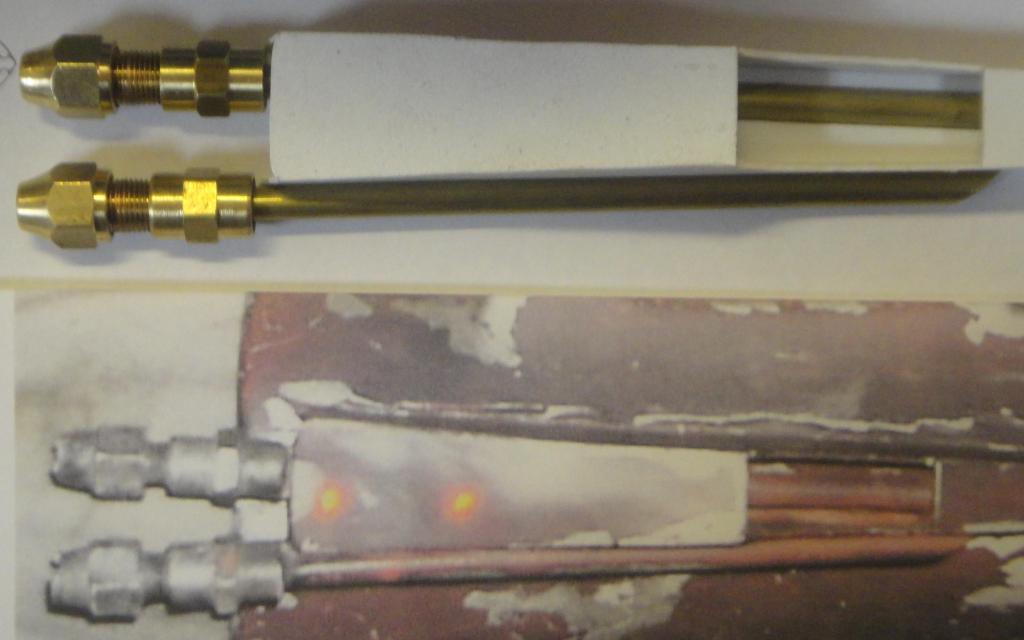 After going through all that today, I think I'm going to stick with the ones I found. I'll keep y'all updated as I get things cut and ground down and actually assembled...

can anyone say the length of the Pipes that go from the gauntlet into the suit and onto jet pack, thanks Adie UK. Most of these are different here in UK, so I'll search in here for uk builds