I've been toying with the idea of using magnets to attach the 3 hoses to the ROTJ gauntlets. Currently the hoses just slip onto the wooden dowels: 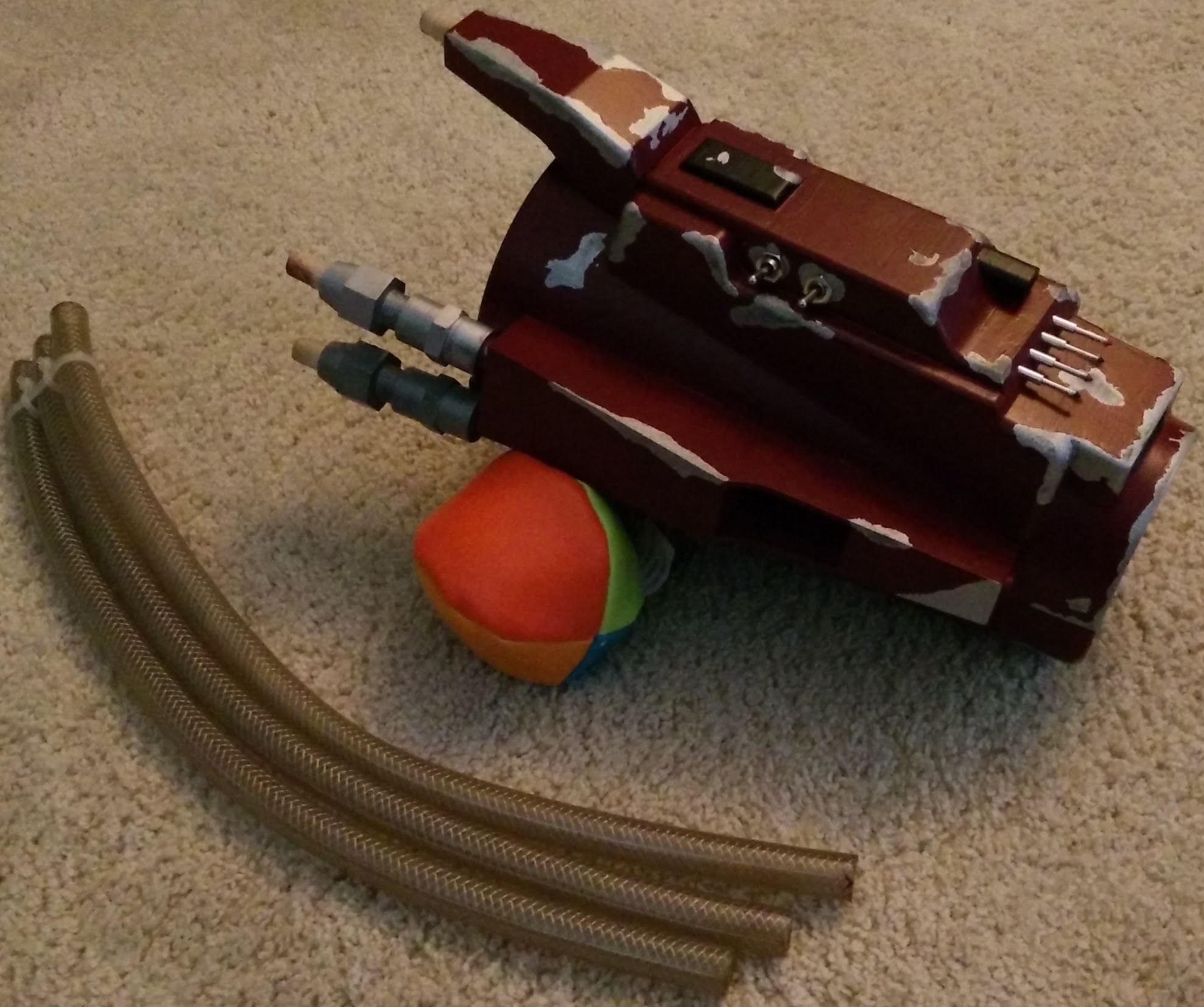 My problem is that bottom hose is just epoxied on, and I'd like something with a little more "give" in case of an accidental tug or whatnot.

Not sure if you guys have any other suggestions (I'm totally open to them!) but I can get some rare earth magnets pretty cheap locally:

I'm using 3/8" dowels and the ID of my hoses is ~5/16". If the magnet idea is viable, I'd like to 3D print a hose barb with an embedded magnet, which is still doable but I'm currently out of filament. I'm also in a little bit of a time crunch for a con at the end of this month.

I've been eyeing these magnets, but am not sure if they'll be strong enough for what I want (don't want them too strong either):

I figure I'll need 6 of whatever magnet I end up going with, but would like to keep them both the same diameter. I could mix and match to get whatever total lbs force, but I figure 2.8 to 3.4lbs (1.4 x 2 or 1.7 x 2) for each hose should be plenty. I think HDD magnets are around 10lbs each, and 2 of those together are way too strong.

Anyway, sorry for the rant but if anyone can chime in and give me some advice I'd appreciate it!

Alright everyone, in the interest of logging info for future builders, here's what I'm currently working on:

The grade / pull isn't listed on that page, but since they say "compare to Master Magnetics 7045" I'm going to assume they're grade 35 with a 2.61 lb. pull (assuming the thinner Harbor Freight magnets are that strong).

I just glued the ends of the hoses onto the connectors. Use a keyring through all three tubes along with a carabiner to attach it to the inner part of your flightsuit sleeve (sew a loop).

DeathProof said:
I just glued the ends of the hoses onto the connectors. Use a keyring through all three tubes along with a carabiner to attach it to the inner part of your flightsuit sleeve (sew a loop).
Click to expand...

Thanks for the reply! Yeah, I initially had the hoses just "slip on" to the dowels but wanted something with a break point since the tube on the bottom of the whipcord is only held in with epoxy.

I will likely do something similar to attach the tubes to my vest. Undecided if I want to sew a button hole (would have to bring it somewhere since I don't have a sewing machine) or just hole punch a tarp grommet under the sleeve of the flightsuit.

Just as an update for future people who might find this thread, I "finished" my Fett costume in time for a con this weekend, but ended up not attaching the hoses.

The magnets made a solid connection, but once the hoses moved enough the connection would fully break. Could be a question of the hoses being a little too rigid as well.

Anyway, due to that, time, and general "quality of life" / mobility I decided to simply wear the costume without the hoses. I justified it by saying the "Robot Chicken" depiction of Boba Fett didn't have any hoses, so it worked out.

I've been looking online at "ball and socket" magnet joints, which seem to be used a lot in 3D printer modifications. It won't look accurate, but allowing the magnetic connection to pivot might make this a viable idea. For now, however, I'll likely leave it alone and work on other aspects of improving my Fett costume.