Hey all, I just finished my "Holiday Special" jet pack. Let me know what you all think! 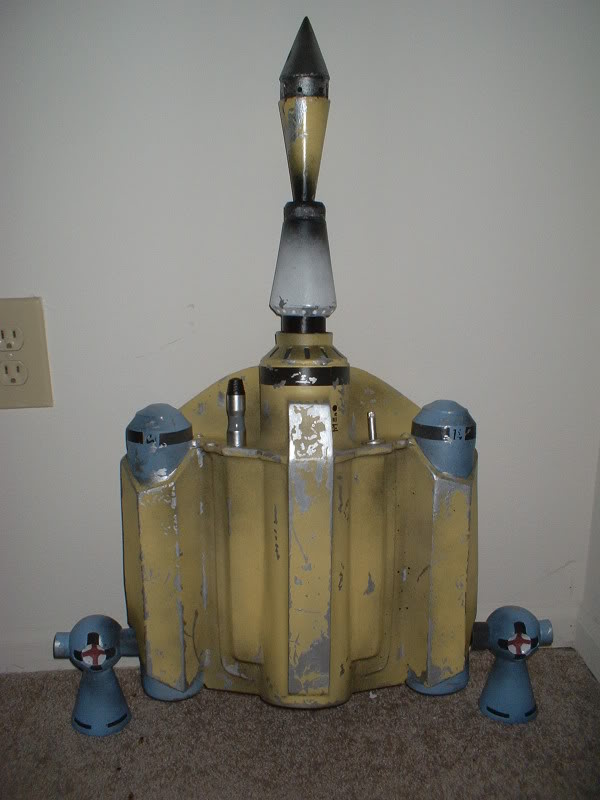 Jimmy BufFETT said:
1) How long that take to finish?
2) What source(s) did you use as reference(s)?
Click to expand...

1) In total, not counting all the downtime the jet pack spent on my table untouched, I'd say it took about 6 good days of work.

2) My sources are quite varied. The weathering on the body of the jet pack was highly inspired by a member here, in fact. Darth Miller's ROTJ jet pack was my main source of the paint chip design and whatnot. His pack is just amazing, and I wanted to do something equally as amazing. However, since his pack is still in progress, I had to come up with my own chip marks in places he didn't get to yet (mainly the sides.) The rocket's weathering was based off of several ROTJ packs, and the paint chips on it were based off of the prepro2 rocket. However, since this rocket lacks fins, I had to change some things up and omit certain details. So in short, not one single pack was my source of reference.

Also worthy of note: The paint design was, of course, inspired by and meant to be the Holiday Special version. But since this is meant to be a realistic approach to that version, I decided to add little bits of detail to it (such as the black bands and the prepro style beacon).
Last edited by a moderator: Jul 24, 2017

I can not wait to see your complete Holiday Fett!
Last edited by a moderator: Jul 24, 2017
G

Yeah! What he said! That Rocks!

That rocks man. Excellent interpretation!!
I love the "real world" cartoon approach you're taking.
Last edited by a moderator: Jul 24, 2017

That is cool, I finally finished the Holiday special. It took me about 6 months to finially get through the whole thing 3-5 minutes at a time. I was able to watch the entire boba fett animation sequince though as it was really pretty cool.
Last edited by a moderator: Jul 24, 2017

VERY nice. When I read the thread topic, I was expecting something brighter, cheerier....and cheesier. You made it look fantastic. You will have a sweet suit if you finish the rest like that pack you did!!!!
Last edited by a moderator: Jul 24, 2017

Don't ,know how I missed this....FANTASTIC!!! The finished product should be nothing short of stellar!

Most impressive, friend! That turned out fantastic, friend!
Last edited by a moderator: Jul 24, 2017
T

That is one kick :moon jet pack. Its colors are awesome and so is your detail on the pack itself. Very nice bro for a job well done!!!!

Very cool to see it in that paint scheme