Ive asked already for a little help and here is the reason why I asked.
I decided to show you some pics of my progress of a Boba build that startet with a very low budget.
This is just a base build to get some skills and experience with this highly complicated costume and will be upgraded when I'm able to do so.

A few weeks in the past I was able to get my hands on a damaged Rubies costume (yeah I know that it was going to be rubish because I was already monitoring the forum and did some resarch). This was in my opinion to get a decent base on a Mandalorian Set because I have some skills and time to improve it.

Well here are some pics of my 2 week progress so far. The aim will be a descent variant of the Boba Fett SE Edition. Yeah I'm aware of the fact that the Damage and some smaller parts like the color of the Markings aren't 100% correct ===>YET<=== and other major Parts aren't accurate ===>yet<==== give me some time please especially to save some money because this is the real limitation I'm fighting now.

Well as said...the base is the Supreme Version from Rubies and this is real rubish ....even worse than expected ...but well...time was a critical factor. The aim was to get a descent version (looking not correct) ready for the 14th of dec. 2017. And by this time it meant i had approx 10 days left to improve it with nearly no money left... 100$ left but most of it will be spend for colors / primer and sealing...

The out of the box version is unbeliebvable crappy.... and there are really people out there who aren't ashamed wearing the stock version??? nearly finished ... maybe a bit to much "used"-look THis is the stockversion...even the visor is clear... who is selling such stuff? Just: WTF Stockversion...wraped some parts with a hot-air-pistol´to fit better my chest: Thinking about how I may rescue it without starting from the scratch (only 4 days left)... drilled some holes for the leds and buttons... 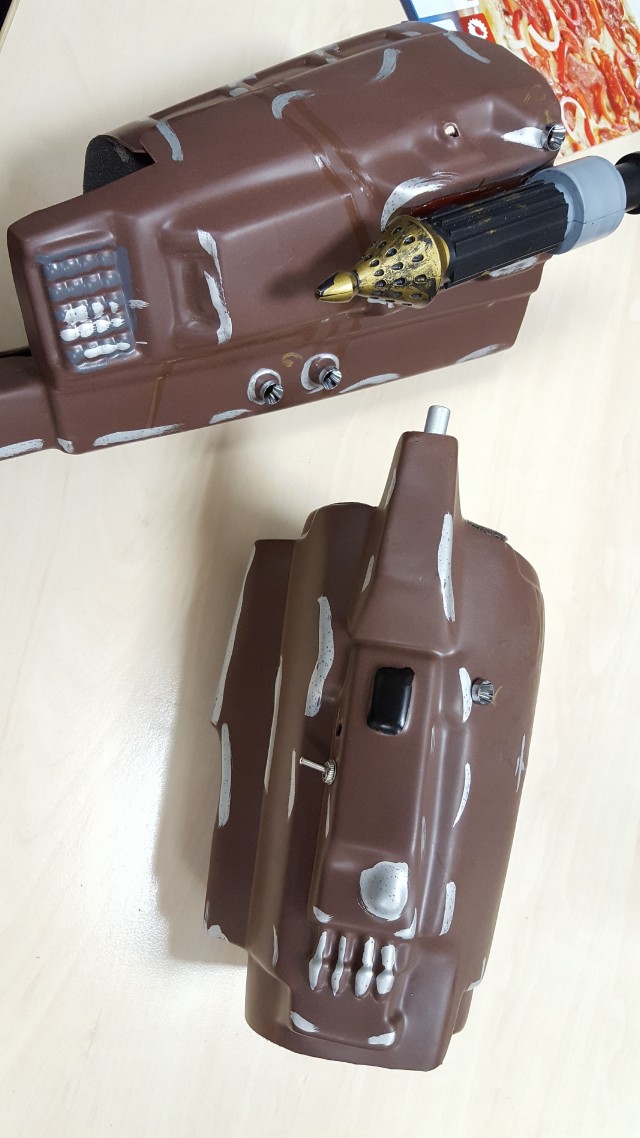 Added more possibilities to attach hoses and also the hoses...:
(I know... the missle one is too short (yet) because I connected it to the wrong part of the costume :/) out of the box (and again some parts are damaged ...) Oh well, i really tried to get my hands directly on better belts in time because those from the box are the most crapy costume item I ever had im my hands. Really!
They aren't even worth to put much effort in improfing the.... but, well the time won against me :/

I know they are still ugly but i relly just put 1 hour in improving them a tad so they will not completly ruin the rest of the costume. They will be replaced asap with some screen akkurate stuff. After 1h of improving....at least its not "totally crap" to be ashamed of anymore... just only "crap"...you should be ashamed for wearing it... 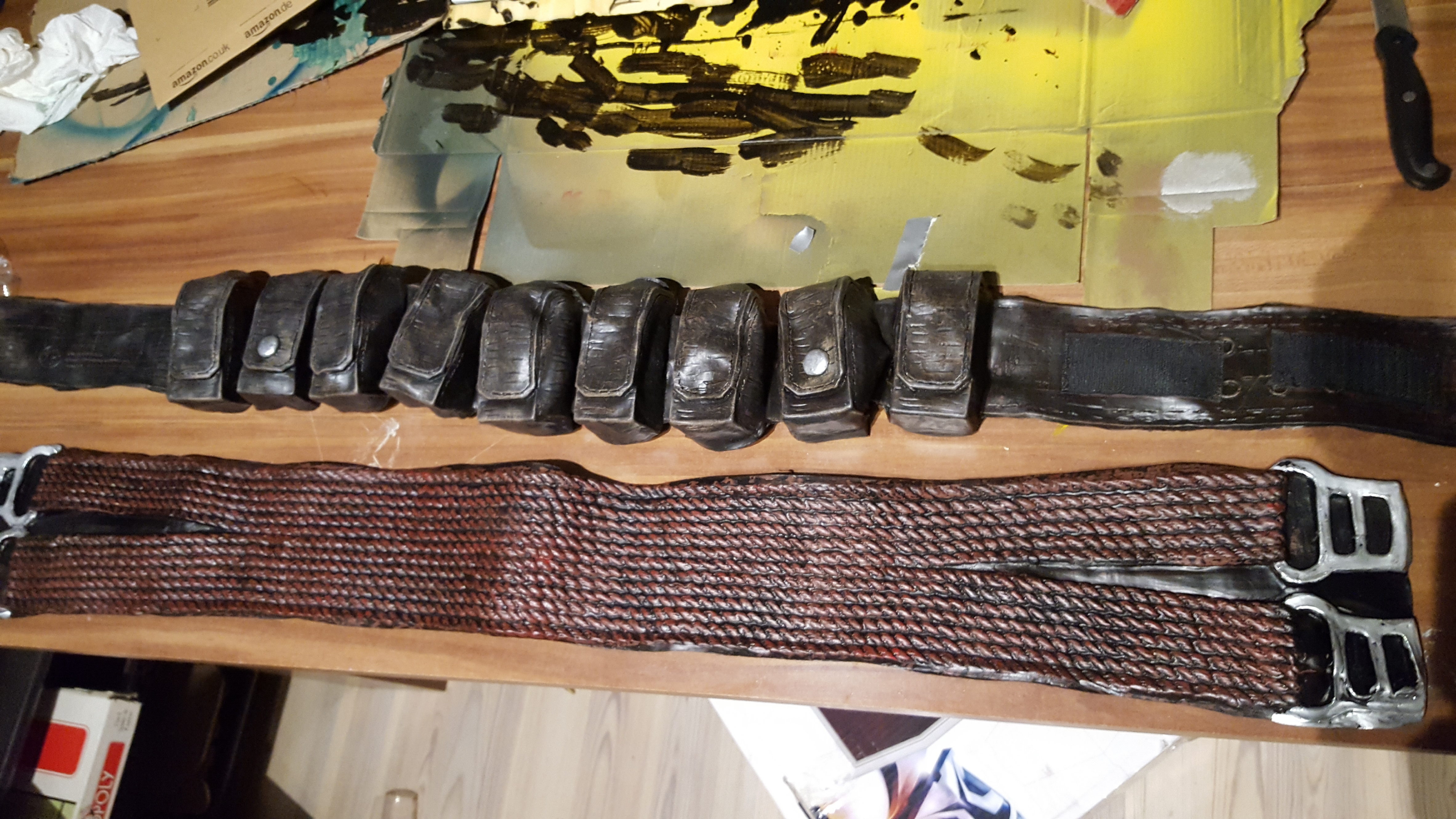 Hopefully this encourages more people with a real small budget to start fulfilling their dreams!

Has anyone a descent ammo belt and wrist band for sale? Because this parts are really ugly out of the box and i fear i will not be able to fix it with my skills :/

Nice salvage on the Rubies.

Not a bad job for what you had to work with. I hope you didn’t spend too much money on it. I personally would have used the money for a nice helmet and started with that. You can’t get yourself in too much of a rush. You have to take your time to come out with a quality kit. It’s a good start to practice and improve your skills. Good luck.

Hi! Darth-Kerche-1975 from the German Garrison forum here!
Nice work like I said before...and good to have you here were all the knowledge is!

thank you for the compliments @ all

I guess... I will post some pics of me wearing the complete suit within 2 days...

Well not screenaccurate and maybe not the best....but i guess also not the worst costume. Here are a few shots from the first time wearing the full suit....and i have still to fix and change a few things. 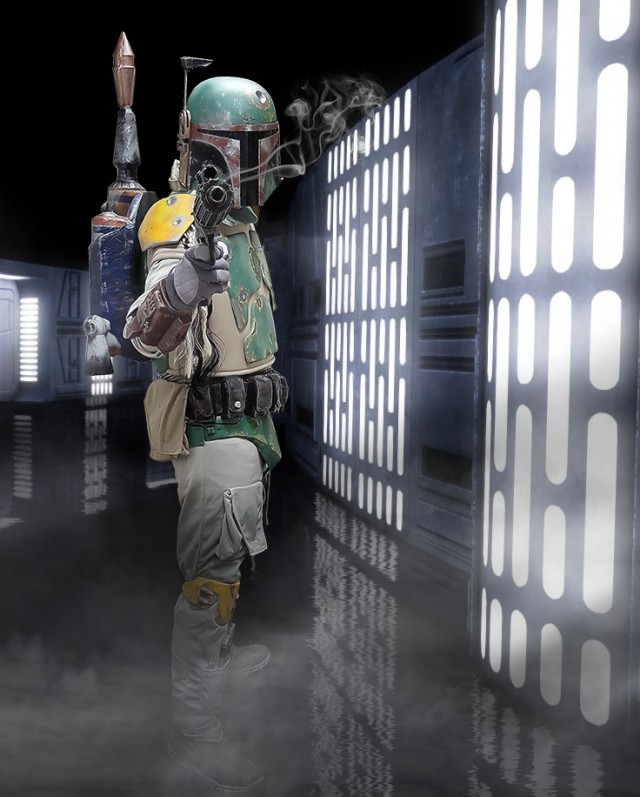 At least we had a lot of fun at the local cinema. I guess I was the better Santa Clause for many children (and a few adults) ;p

...until they confiscated my mask and weapon because of local restrictions against potential terrorists....lol

Weapon looked too "realistic" and they coulnd't see my face...no kidding

It looks much better painted! Too bad about the confiscations but fun should always the primary objective with costuming and it's great to see people just doing it for the fun regardless of screen-accuracy and high budgets.

TDH PREMIUM MEMBER
Looks good! That Target helmet can be a good base to start off with for the price!
H

I did something similar, but not as detailed. I had a Rubies costume and touched up some paint, added a few items, sewed things a bit tighter. It came out good for Halloween, but would not be good enough for Cosplay. Mine did not come out as good as Arminace's. Overall very impressive job!!

Definitely off to a great start. I would suggest trying you hand at adding some layered "damage" paint to give your plates more dimension, specifically the gauntlets. A tricky salvage for sure. I would also suggest getting some cheap dart tips and paint them silver to replace the goofy molded ones on the gauntlet. Again, this would give your gauntlets a lot more dimension and more realism but also remaining cost effective. A little sanding of the current dart mold 'bumps' and then drill some holes for the dart tips and there you have it! I made my gauntlet darts the same way. Cheap and easy with the added bonus of looking great.