Hey guys! Been working on my jetpack quite a bit lately and I'm really happy with the progress I've made so I wanted to share. I also wanted to show how I did some things and information I learned during this process, maybe it'll help someone else out there.
So here's where I'm at: 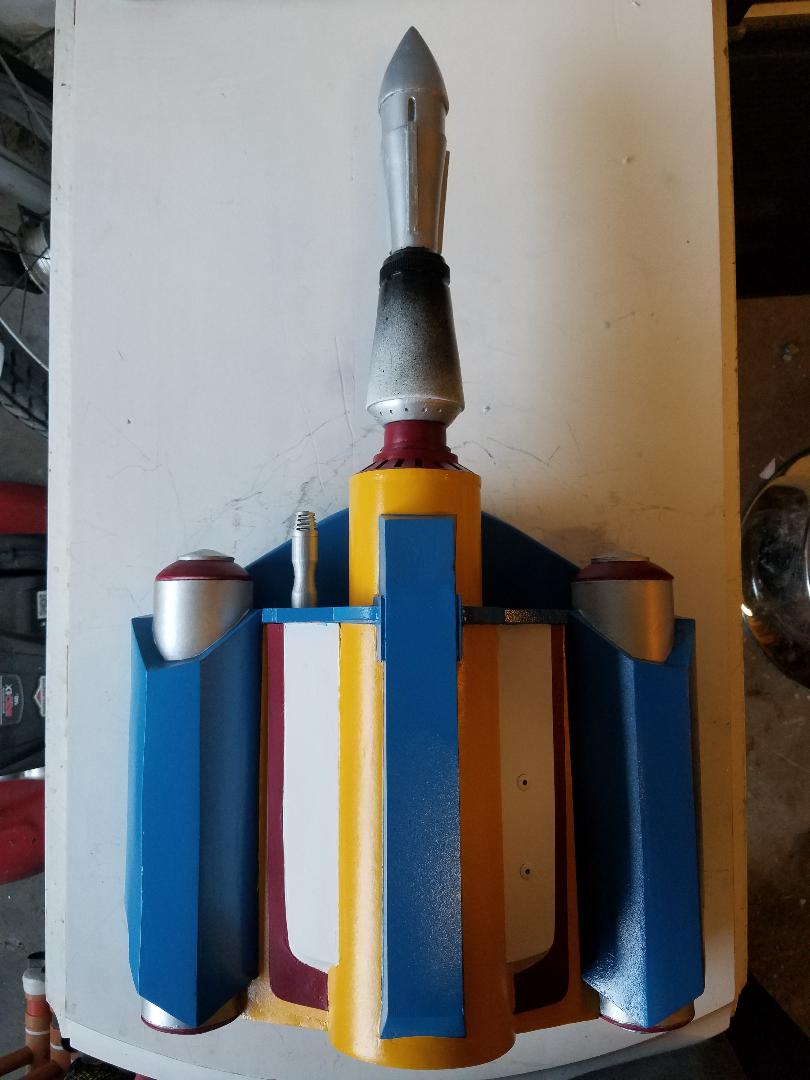 I'm gonna try to detail the process as much as possible, and provide pictures (some of which I have to find), so it may take a while. Hope you all enjoy the ride!

THE BEGINNING
Materials and Paint:
I feel this is a section often overlooked, but I think it's important. First, you need a bunch of sintra. I think I ended up using around a whole sheet in the end, as in the 24" by 48" sized ones. Not sure as I prefer the 24" x 24"s, plus there were mistakes and such. I use the 3mm or 1/8" sintra and get it from Amazon.
The side fuel tanks are cardboard shipping tubes, the center one is a piece of ABS pipe that doesn't go all the way through to save on weight. The outer shroud of the center tank is from a cylindrical gift box that happened to be the right size, it once contained a Gibson pilsner glass and coasters I got for X-mas.
The rocket is wood my neighbor helped me lathe into the correct shape.
I also used a TON of super glue and E-6000.
Paint is mostly Krylon: Burgundy, Marigold, Aluminum, White and Black; and Rustoleum Safety Blue.
WOF's Jetpack Templates

And that's about what I started with. I drew out the main body pieces I needed and went from there. The skeleton of the pack is the ABS pipe and the top layer, there also is a baffle in there. I then added the side tanks, which help keep it all together. Everything else is built around those pieces or layered upon it. Man, is that confusing? I need to find more pictures....hopefully next time I'll have some.

Ok, so here's the picture I found of the inside of the pack. Basically, the pipe is glued to the top and the baffle in the center, then the side tanks are glued in. Hopefully that all makes sense, I think the picture helps.

MAIN BODY
So, when I started this, I really didn't know what I was doing. I'd made the armor pieces and stuff, but not anything this complex. Needless to say, I didn't account for the thickness of the sintra, which Alan warns about in his templates, I cut everything to the template size. I figured if I had to cut things down to make it work, then I would. I really didn't encounter too many problems because of this either, but I will point them out.

First, for some reason the whole stairstep part on the top of my pack was short by 1/8". Not sure why it turned out that way, but it did. Also, don't bother cutting the hexagonal shaped parts on this template (on the sides) you wont need them. I kept that part on the baffle for support, but I had to cut 1/8" off every side and I eventually cut off all the corners too. You may not have to cut the corners, I'll talk about it when I get to that part.

I next added the panels that run between the tanks, I highly suggest waiting to glue these parts to the side tanks until the bottom is fully on. Then the center shroud was glued in. Next, came the hexagonal parts that go around the side tanks and form the sides of the pack. I formed them out of whole pieces of sintra that I heated and bent, but it's hard to get those angles right. I wish I would have just cut it, so I suggest doing that. I spent so much time filling and sanding to get those corners that I don't think it was worth it to do it that way. Here is also where I cut the corners of the baffle, the formed pieces wouldn't correctly seat due to the folded sintra,

Last was the bottom which is kind of floated on there, it's first glued to the yellow panels on the front, and then to the sides. I added support for the side tanks on top (see above pic) and would later do it for the bottom as well.

This pic was taken a little further on, but you can still get an idea of what it looked like. By this point, I also would have been adding the extra layers to the top piece to give it it's thickness like shown here. The burgundy and white pieces I put an angle on the edge of the side and top to put them together, I found that to be the easiest way. Then they just glue on top, along with the blue part in the center.
Last edited: May 9, 2020

Hey thanks man, I truly appreciate it!

TANK CAPS AND VENT CAP
The tank caps I didn't make the way they were designed in the templates. Instead, I cut out varying sizes of circles depending on how it needed to look, and laminated them with super glue. I then dremeled and sanded them until they were the right shape. I also glued them on top of the caps that came with the shipping tubes so they're sealed up real nice. The red pieces that make the top of the vent cap and the silver piece above that were also made in this fashion. The divots there I simply drilled by hand with a 1/8" bit.

The vent cap was made how its designed, I had to glue each rib in individually and wait for it to dry before continuing. It took a while, but I like the look it achieves. I then drilled a hole through the whole piece so I could separate the rocket assembly for storage etc.

ROCKET ASSEMBLY
My rocket was borne out of a couple of pieces of 2x4 glued together and lathed into the proper shape. It was rough at first, but with a dremel, sandpaper, and some carving knives, I was able to pull it together.

I drilled a hole in the bottom and glued in a dowel which just slides into the hole I made on top. The dowel is kinda long, but I didn't want to risk it just popping out if it was too short.

The keyholes for the fins I carved out with a U-shaped knife that came in my carving kit and the fins are pieces of sintra.

The ribs for the collar came from the lid of a plastic Snapple bottle. I thought they were a good likeness and it worked out pretty good I think. Of all the tools I tried to cut the caps, razors turned out to be the best, even though I cut myself a few times getting the pieces I needed. Totally worth it.
It's all a little rough still so it needs some work, and I'm not sure how to get that silvery red color. I think I'm going to try just mixing some silver and red and see how that comes out, if anyone has any suggestions though, that would be awesome.

HARNESS
I will start by saying that my harness is custom built to me. I made it to fit me and my jetpack specifically, and while it at least looks the part, it isn't accurate at all. I took a lot of liberties with the harness since really you're not supposed to see it. I'm also 5'6" so things tend to need to be a little smaller to fit me correctly. The frame is made of 1/2" aluminum piping, 1/2" steel bar stock, and aluminum sheet metal; everything is screwed together via holes I drilled. I don't have a rivet gun, so this was the easiest way I could think of to do this, plus screws are cheap.
I struggled with how I was going to get that bend in the pipe, I didn't want to kink it and I really didn't want to have to get another piece, so I basically had one shot. Pipe benders won't work, the radius they make is too big, so I decided to try a tube bender. They're typically meant for copper tubing and diameters smaller than 1/2". It worked a little before I broke it, but I was able to use the curved part of the tool with my vise to get the rest of the bend I needed. I also packed the pipe, but I didn't have sand and used birdseed instead, it worked really well.

I cut the sheet metal parts out by first scoring it with a utility knife and then bending it back and forth until it breaks, you get a nice clean cut that way. I then curled them around the frame and bolted them on.

I bought seatbelt strap online along with slide adjusters so I can shorten or lengthen the straps as needed. I also bought a diving buckle that is at least similar to the U.S. Divers one.
I connected the white straps with a piece of 1/8" steel rod bent around the seatbelt straps, so they can move up and down if I need them to. This way I didn't have to figure out exactly where they're supposed to be to sew them on.
I originally had used the 1/8" steel rod as the rectagular rings on the bottom of the harness, but have since switched to 3/16" aluminum rod for added strength.

Your jetpack looks great! I'm extremely impressed with the harness. I'm considering doing the same for my build, to save costs mostly. I'm thinking of using copper tubing. Did you go with aluminum because copper isn't strong enough? I appreciate any insight you, or someone else, may have in this area.

MrFusion1138 said:
Your jetpack looks great! I'm extremely impressed with the harness. I'm considering doing the same for my build, to save costs mostly. I'm thinking of using copper tubing. Did you go with aluminum because copper isn't strong enough? I appreciate any insight you, or someone else, may have in this area.

Hey man, thanks for the compliment. Haven't been on in a while and just saw your comment, but I honestly didn't think to use copper, I would think it would be too flimsy, plus the original diving harness would have been made of aluminum anyways. I like it cause it came out pretty strong and light.