Ok some of you may have known that I have been working on a mostly PVC blaster for quite some time. Here is what I did:
I picked up some PVC pipe from Lowes (one 10' section) and I grabbed some scrap 1x6 pvc trimboard from work.

I resawed the trimboard to about 5/8" thick to use for the frame of the gun. I took some self-made templates as well as Wizardofflight's and made some tracings, cut and cleaned them up. I then went and picked up some PVC closet rod from Home Depot and sanded the crap out of it and slid it into the tube that I had cut. I put a notch in the end that would fit the top of the frame and used two screws to hold the frame to the barrell.

I then took some left over sintra and cut it for the receiver shroud (you know the piece the seperates this gun from any other revolver). I heated and bent it, and then used plummers PVC cleaner and glue to adhere it.

I then grabbed some masking tape and taped off the open should area and commenced to fill it with bondo. This made the entire assembly very rigid, like one solid piece. While the bondo was setting up and reaching the gel stage I started carving and shaping. Below is what I have so far.
Most details are still undone, this is just a very rough begining. 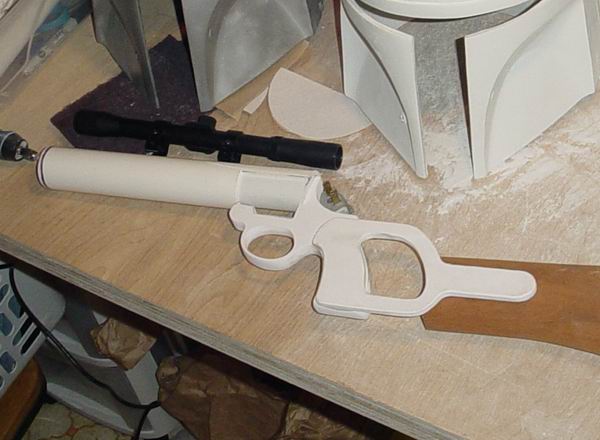 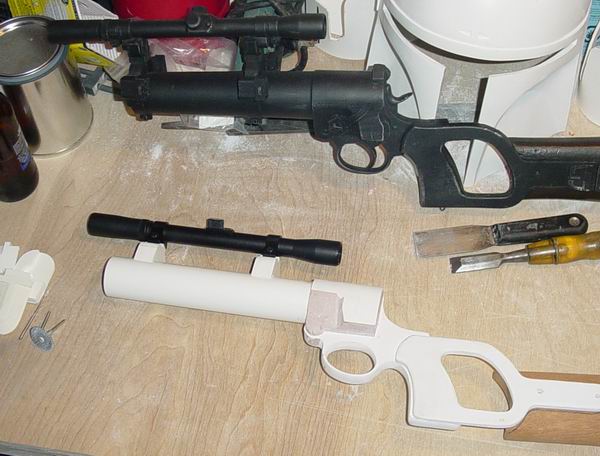 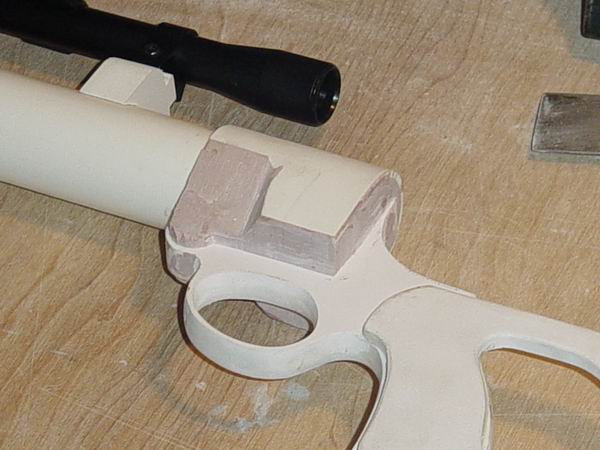 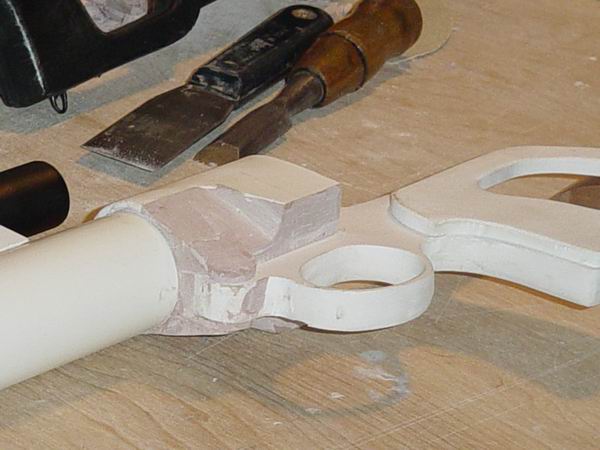 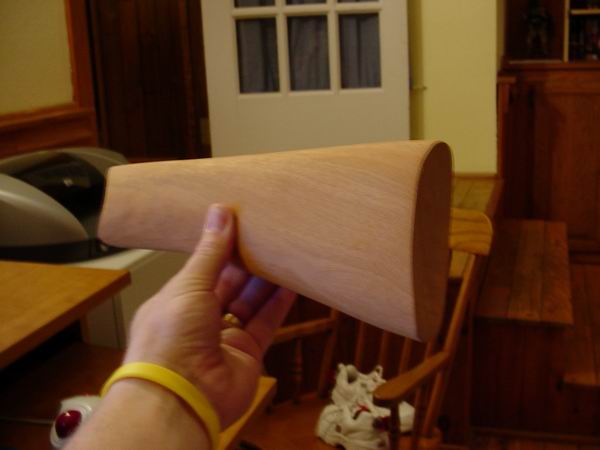 Wow that ROCKS man! Where are wizardofflight's templates? That would be interesting to look at.

Keep up the brillant work Darren!

Looking great so far! It's amazing what's become possible compared to when I first came here, some of the scratchbuilt stuff I've seen lately is just unreal!

You have more pics yet, D?

Who's blaster is that in the background?

Is that your's and you just decided to build one from scratch?

Thanks for the compliments guys, I really appreciate it. I should have some updates this weekend. I routed out the stock for my bracket and I applied some spot putty in the receiver area. I will touch up the barrel tonight, and finish the hingepoint...spray tomorrow and post pics tomorrow night.

The blaster in the background is one of the Sci-Fire blasters, its a real beauty, and now belongs to a friend.

That is looking great!! Love the stock, what kind of wood did you use?

The Prymer has even exceeded the "Sniffers" expecatations!

I'm also wondering how you went about the stock construction and what kind of wood you used. Looks awesome altogether.

I'll have some more update pics tonight, no primer yet, but a little more has been done.

The Stock is made form solid 8/4 mahogany. Hand shaped and sanded. I cut it using WOF templates (Which I can confrim are spot-on!) I am quite happy with the over all look. I still have to clean up the shoulder area of the stalk, but you'll see what I mean later tonight when I post pics.

Here is my follow-up:
-The main gun frame has been cleaned up with spot putty. I am adding the rear nibs on the back of the receiver tonight, and test fitting the hammer and triggers. Once I get that bondo out I'll also clean up the reveiver area near it's hing point, then I will prime everything.

-I spent about 30 minutes routing and chiseling out the area for the stock bracket. It came out better than I thought it would. I am going to hold off cleaning it up until I get my final bracket (aluminum).

-I also took this time to cut and shape my handle. The overall countour isn't exact, but I think it'll work for now. I am going to get some new blades and see if I can take some time to give it the "grip" knurling.

(P.S. anyone with extra gun greeblies please Pm me, I'll need the molex connecters, the stock greeblies, and the newly identified "hubs" for under the V-8 connecting rods.-THX) 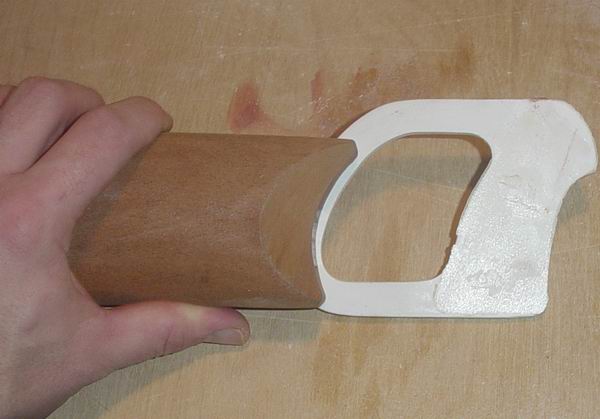 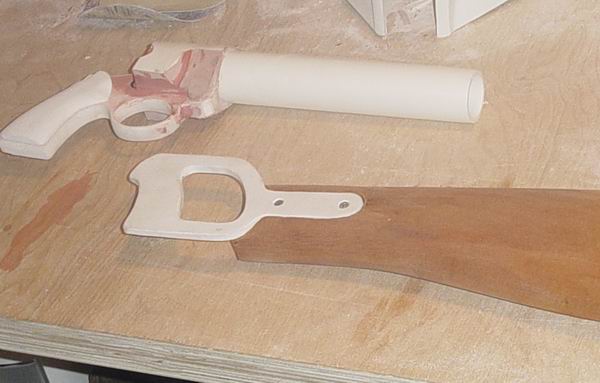 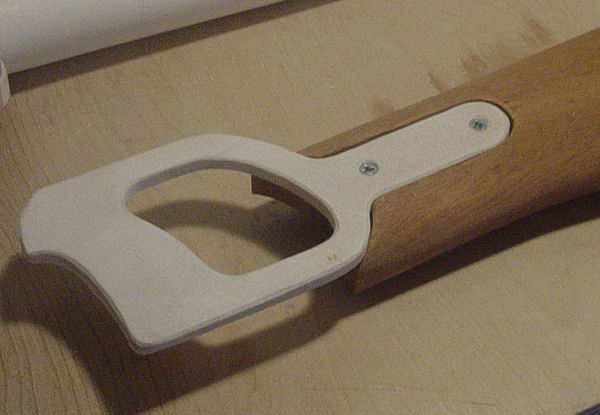 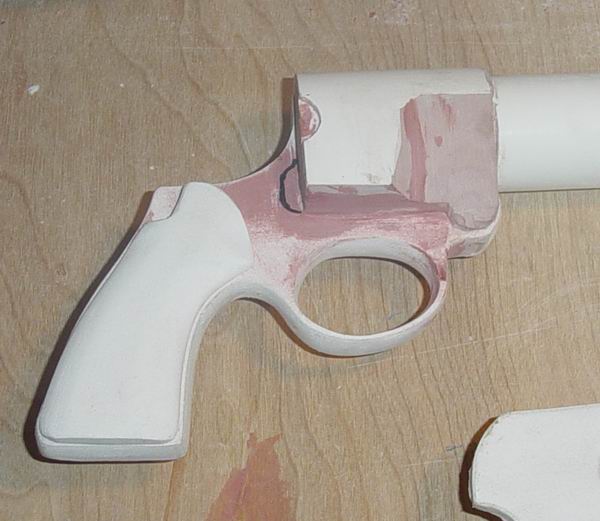 Your work has always been fantastic bro. Keep it up!

Here are the current pics of my ever-long work in progress, sorry for the lack of forward momentum.

I have most of the shaping of the main gun finished. All that remains is to clean up the spot putty, mount the hammer, the trigger, give another good coat of PRYMER, then I am ready for paint... 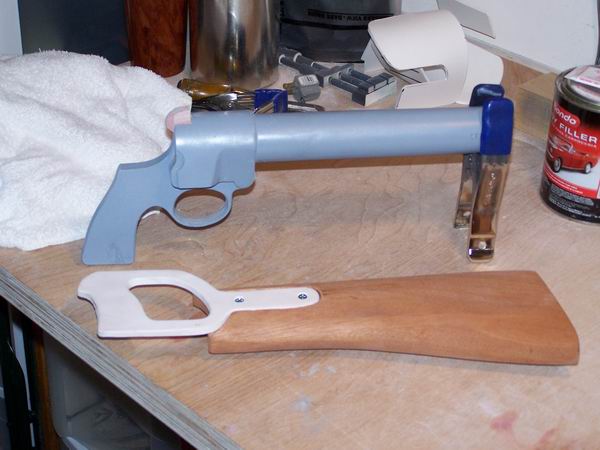 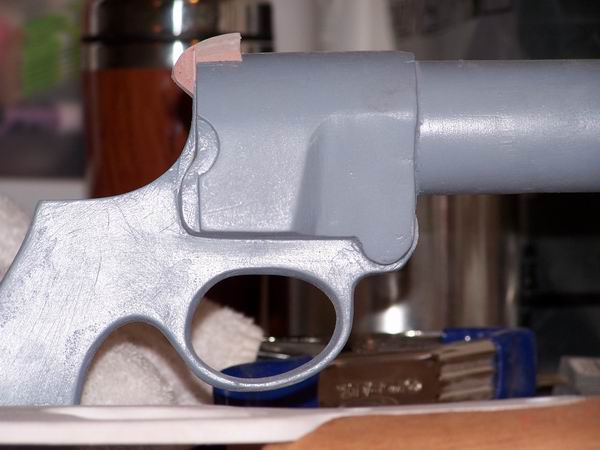 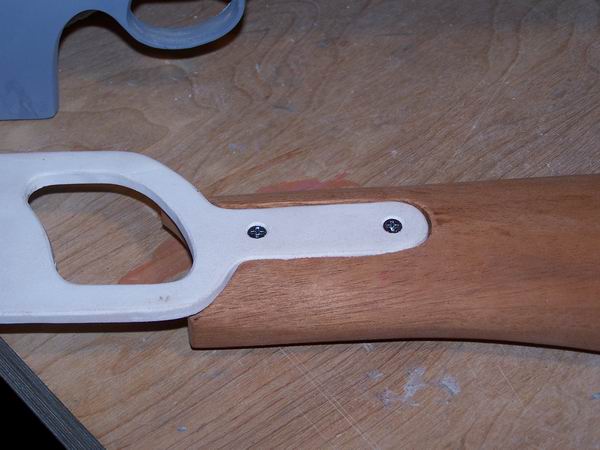 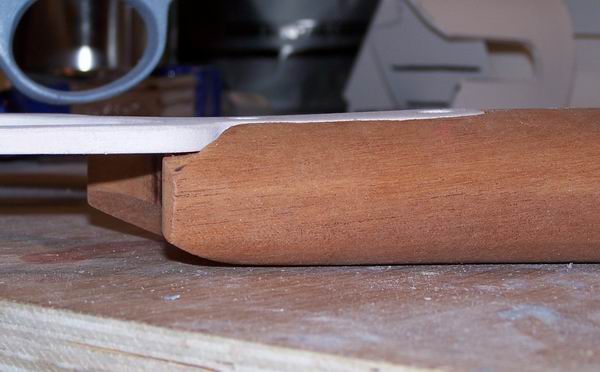 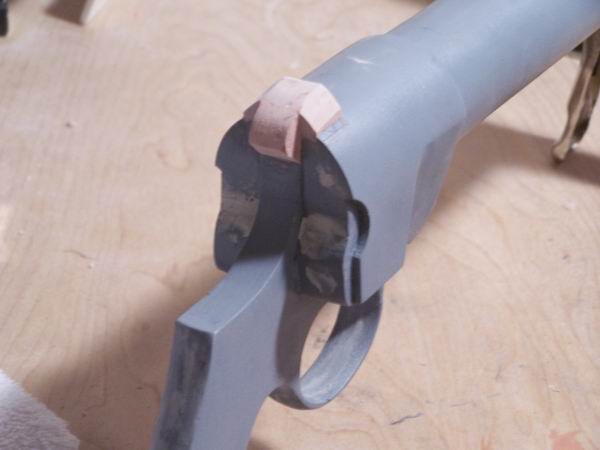