Packing your ENTIRE Fett into one bin!

So I have been traveling and trooping with my getup for about a year and a half now. One of the things I found to be MIND BOGGLINGLY difficult was how to effectively pack the entire costume into one bin, securely, and without pieces running the risk of being damaged.

I have seen some people do a great job in two bins, or in one with the helmet in a separate bag. Unfortunately for me, it is hard for me to transport that many cases.
I figured I would contribute to TDH by showing how I pack my stuff. I know that some peoples things may be configured differently, but overall I think this is an effective and secure method.

First off I got the Husky 37" Tool Box from Home Depot, (DeWalt makes one as well ) on average they are about 60-80$.. A great alternative if you can't afford a Pelican set up, in my opinion.

I then mounted some velcro traveling straps to the bin with some bolts by drilling through the back and lid ( I also got these straps at Home Depot in the same isle as door knobs and hinges) But I would imagine that any strapping system would work. I measured out where the PULCE40 and the EE3 would be mounted, so they did not take up so much space in the bin itself (NOTE* The EE3 did not end up fitting on the lid like I had hope because the removable tray ) So instead I mounted it to the back side, higher than the helmet and right below where the trays lowest point.

With the jetpack completely disassembled, it actually fits REALLY perfect at the bottom. My current pack is Darth Vorhees (Lou's) and it is honestly a great pack in my opinion.

I also put my helmet against the back corner (The photo has it uncovered, but generally speaking it is in a motorcycle helmet bag, or in a terry cloth bag.) It is important that your RF is lowered or even completely disassembled.

I then neatly stack the flak vest (with armor attached) jumpsuit, jetpack harness, back plate, on top of the jet pack, with the cloth down it helps protect the pack but you could also cover the pack in some foam, a towel, bubble wrap. Or anything if you are going on a long or rough trip.

I do put ALL of my fabric pieces in a separate bag (gloves, neck seal, cape, belts, etc etc. I also try and put my knee guards in that bag)

from this point on you can pretty much begin to try and fit everything neatly in. seeing how your setup works.

I also use foam inserts for the tray, where I put my rocket, thrusters, shoulder bells, and the metal studs, all neatly packed and secured. (I LOST MY STUDS SO MANY TIMES! Usually from just tossing them in the bin, as I am so excited to get out of the costume after a long troop. ) So this way makes them easy to access.

The last part is the gauntlets, I secure those in break away foam inserts that i set on the far side by the helmet, with the bin closed they are held into place by the tray.

Anyways, I know its a minor thing but I remember looking a few times on here and not seeing anything about how to pack it. So I figured I'd write one, along with a few pictures of how I have learned to pack mine. Everything fits in one bin, and nothing is really in danger of bouncing around and getting damaged.

I'm definitely open if anyone has ever done something different or better to get everything into just ONE bin. Like I said I know some have used pelicans, several bins, hunting cases etc. But I like to be fast and agile when transporting and am not that big a fan of worrying about carrying so many things.

Let me know your thoughts, 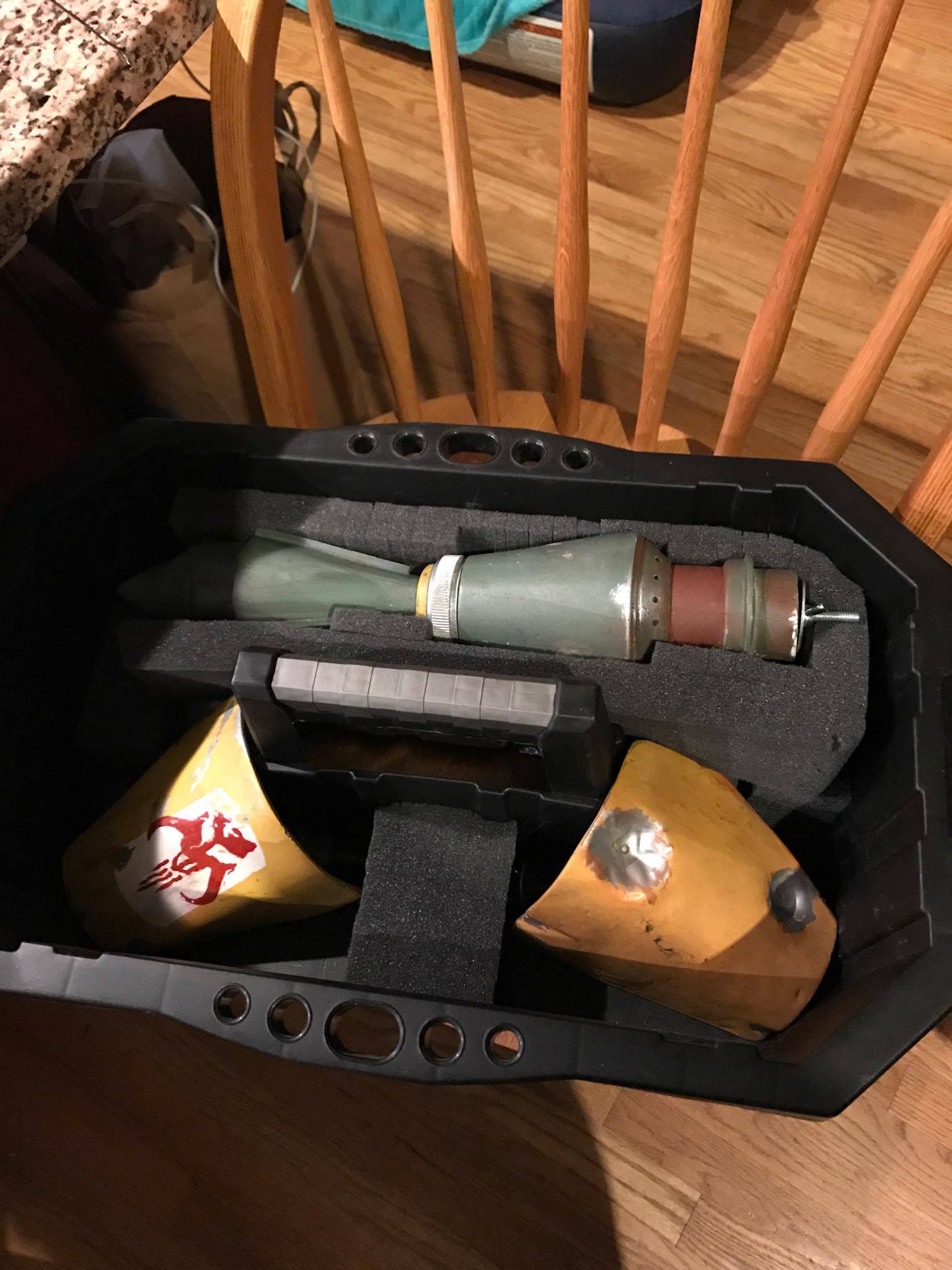 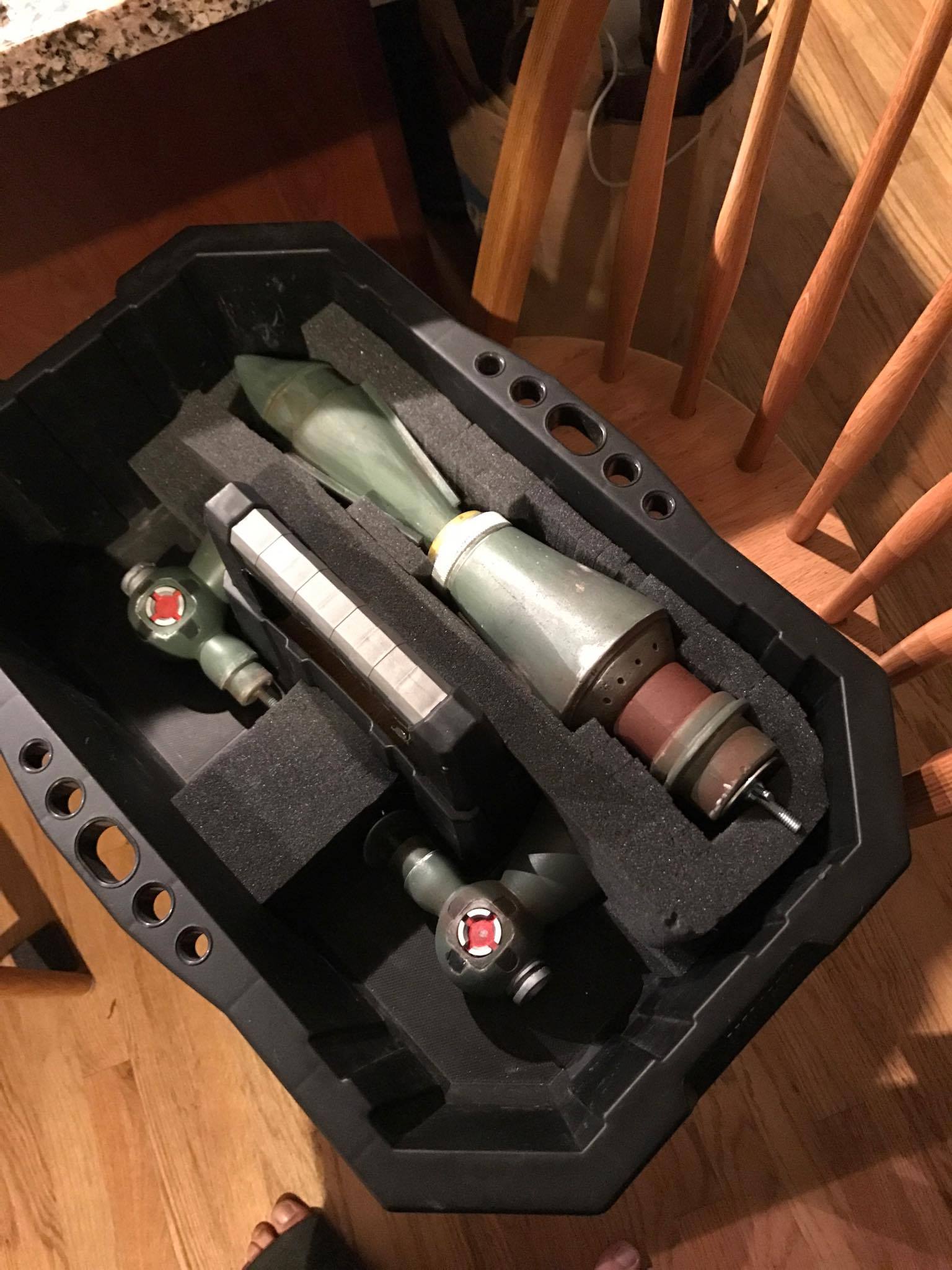 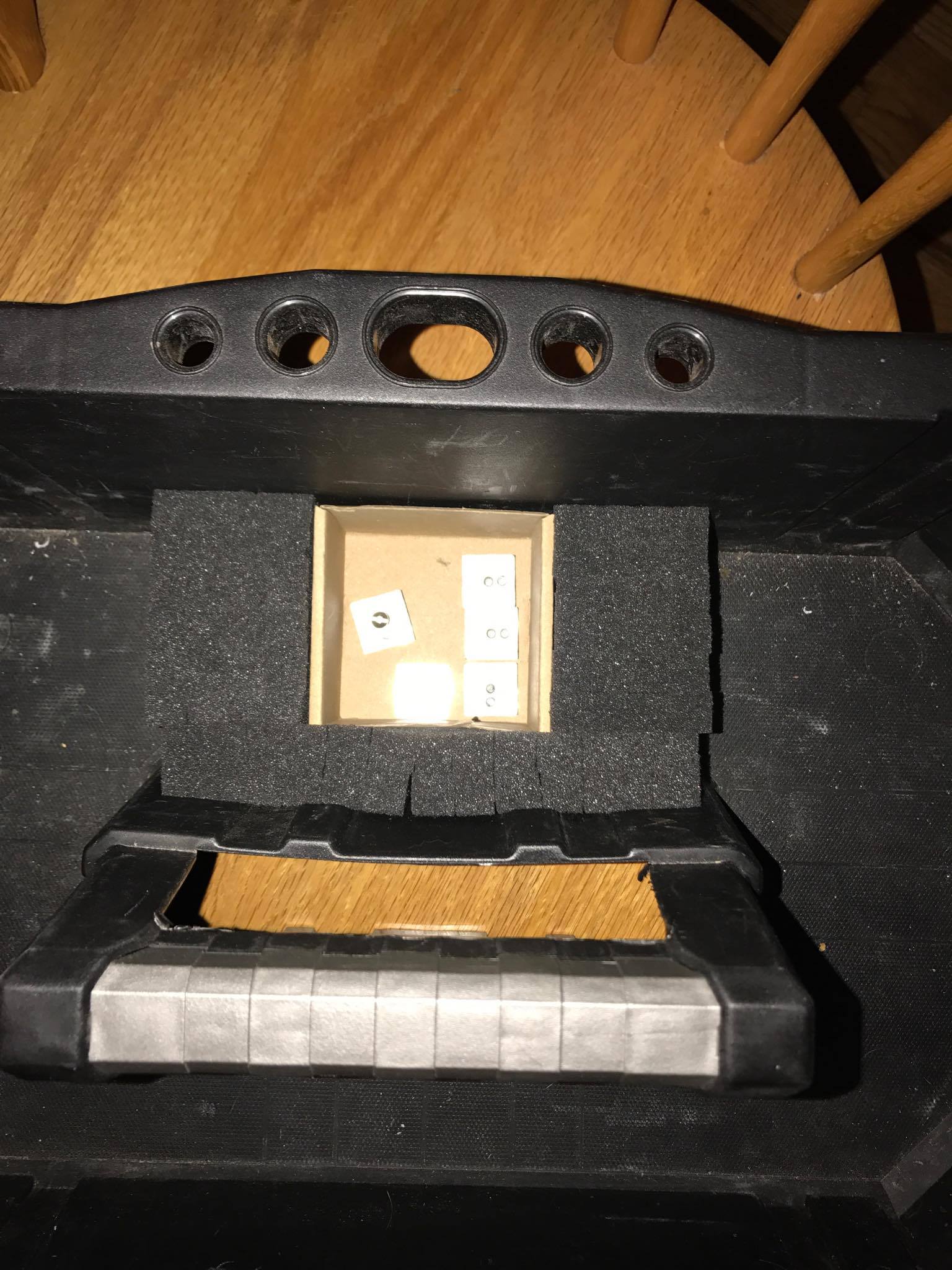 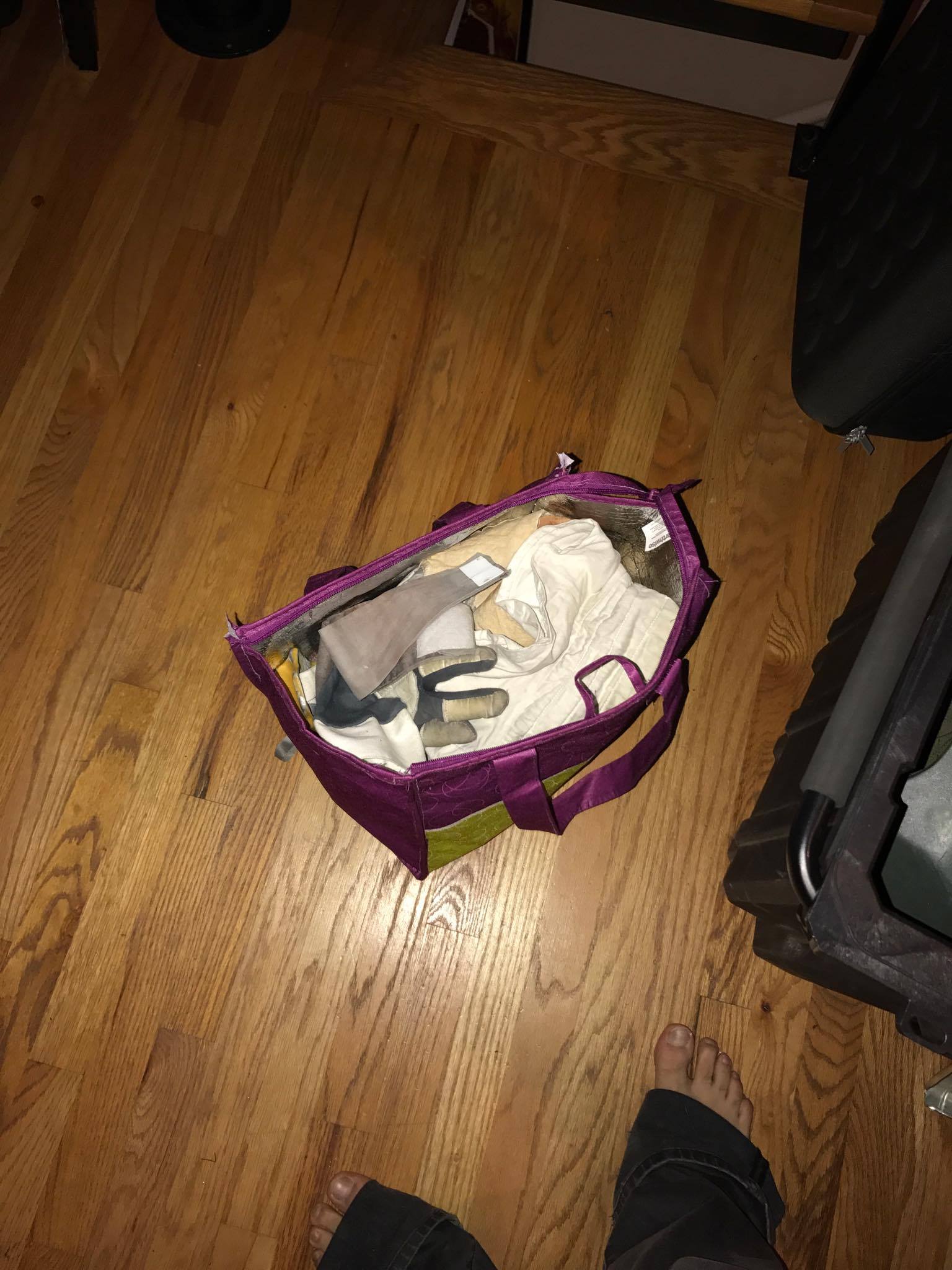 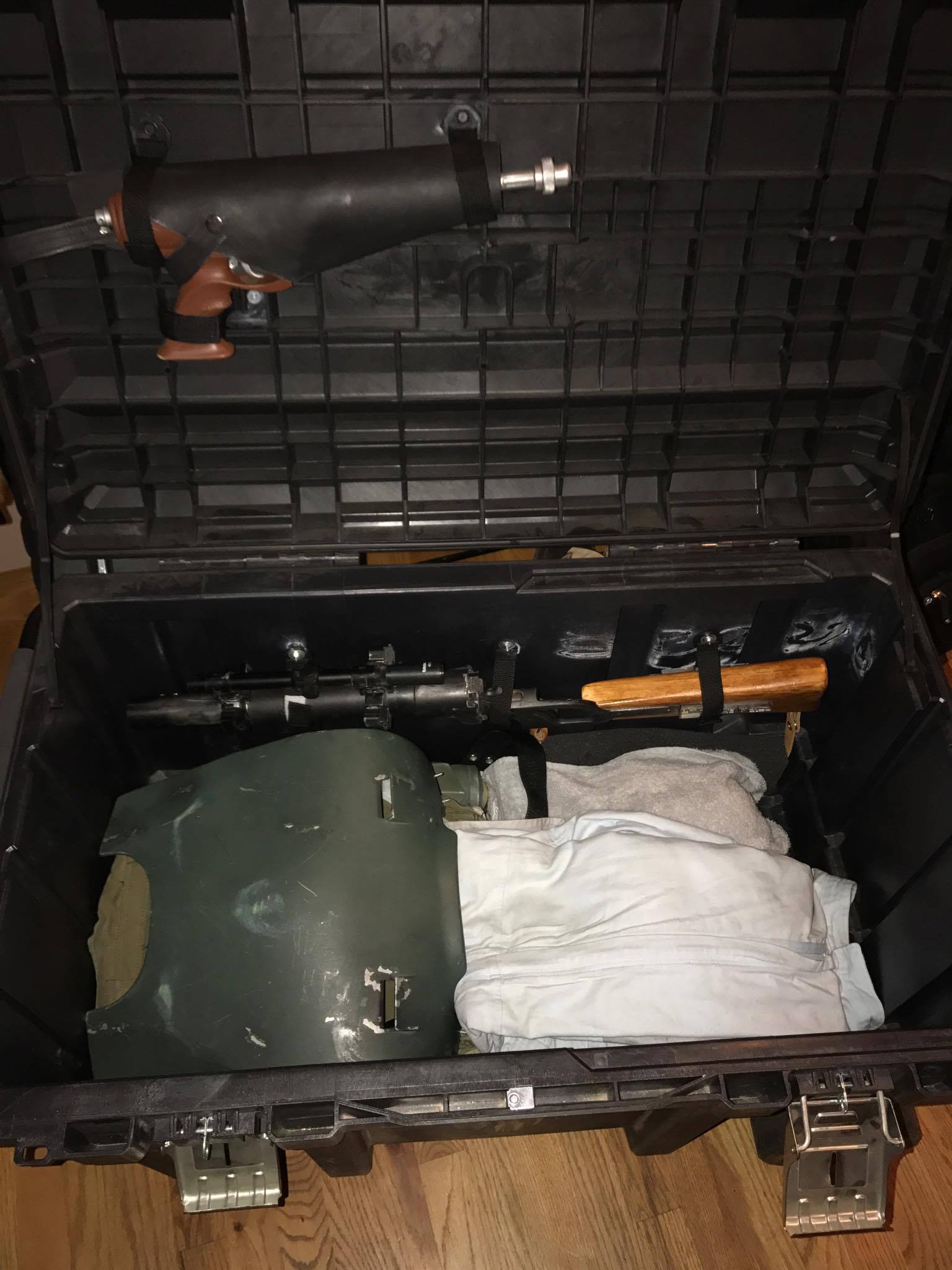 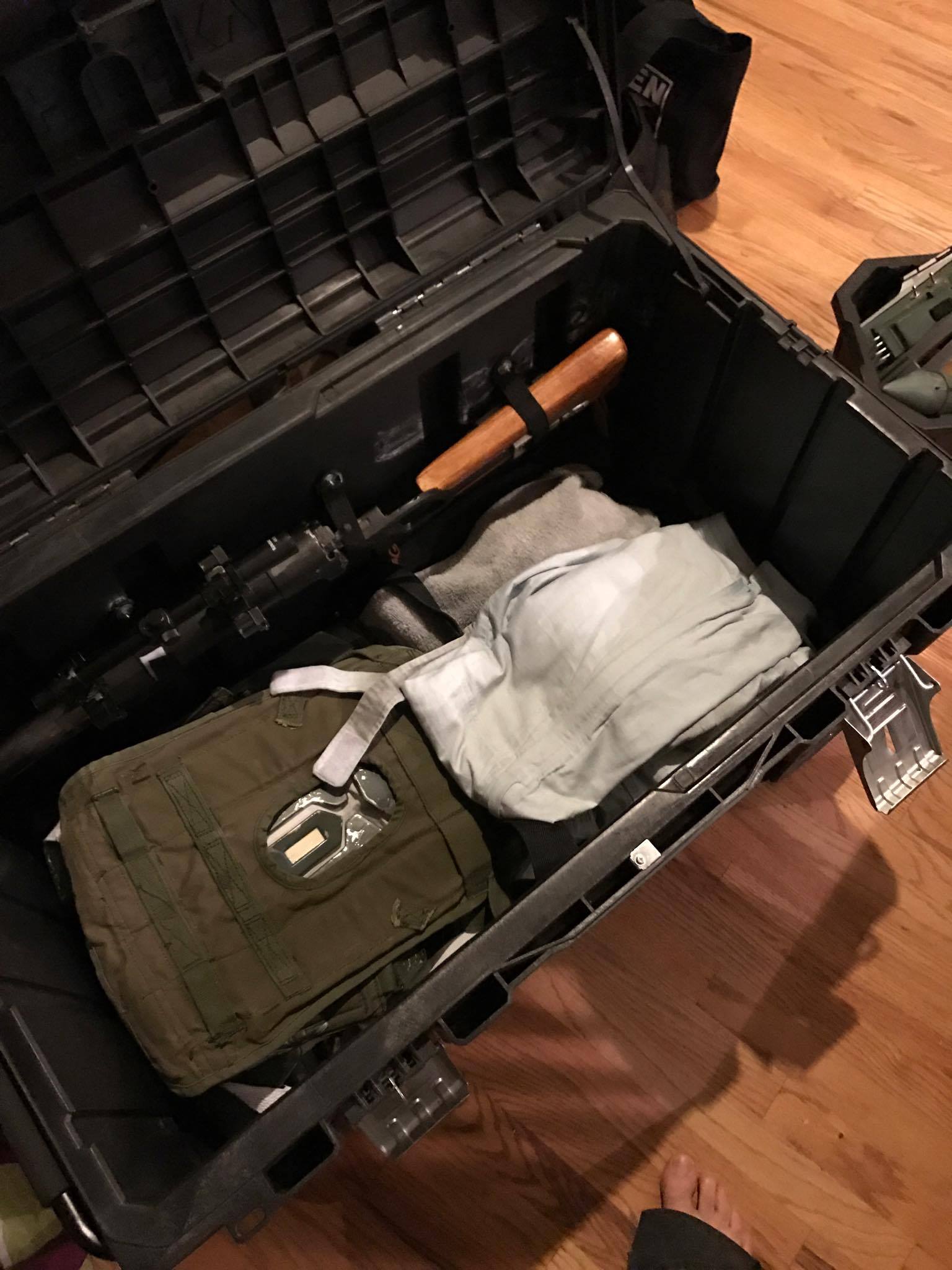 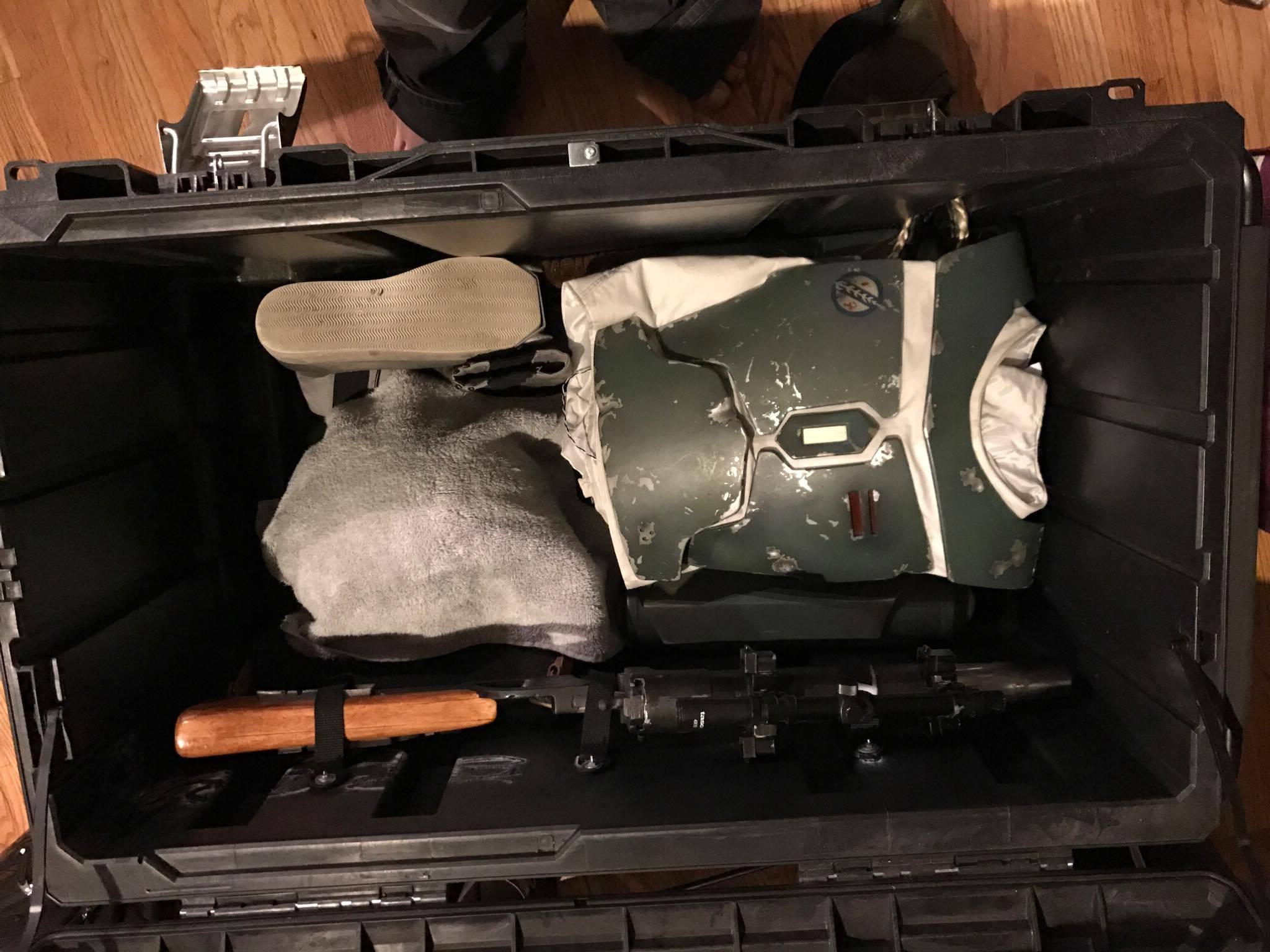 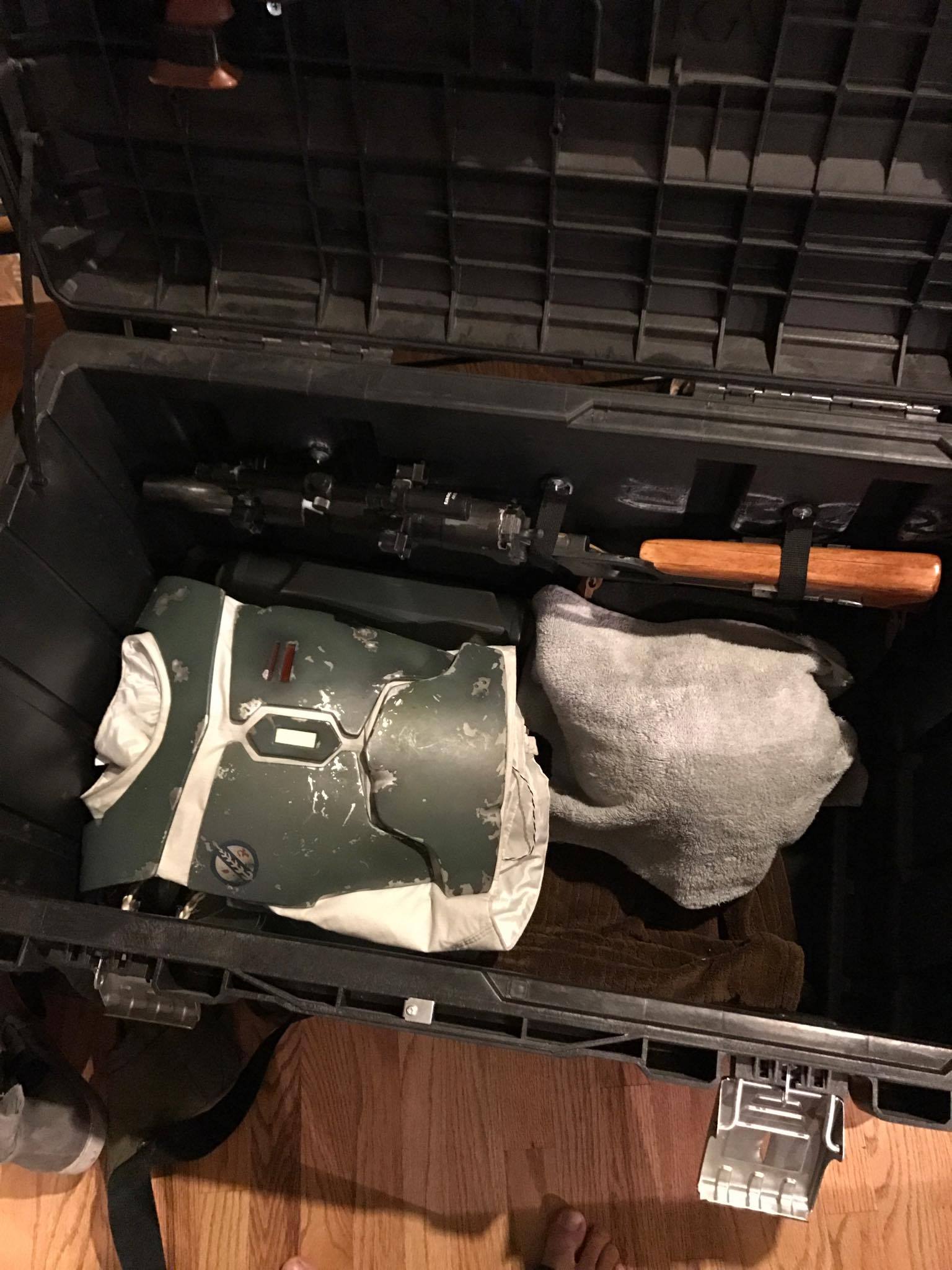 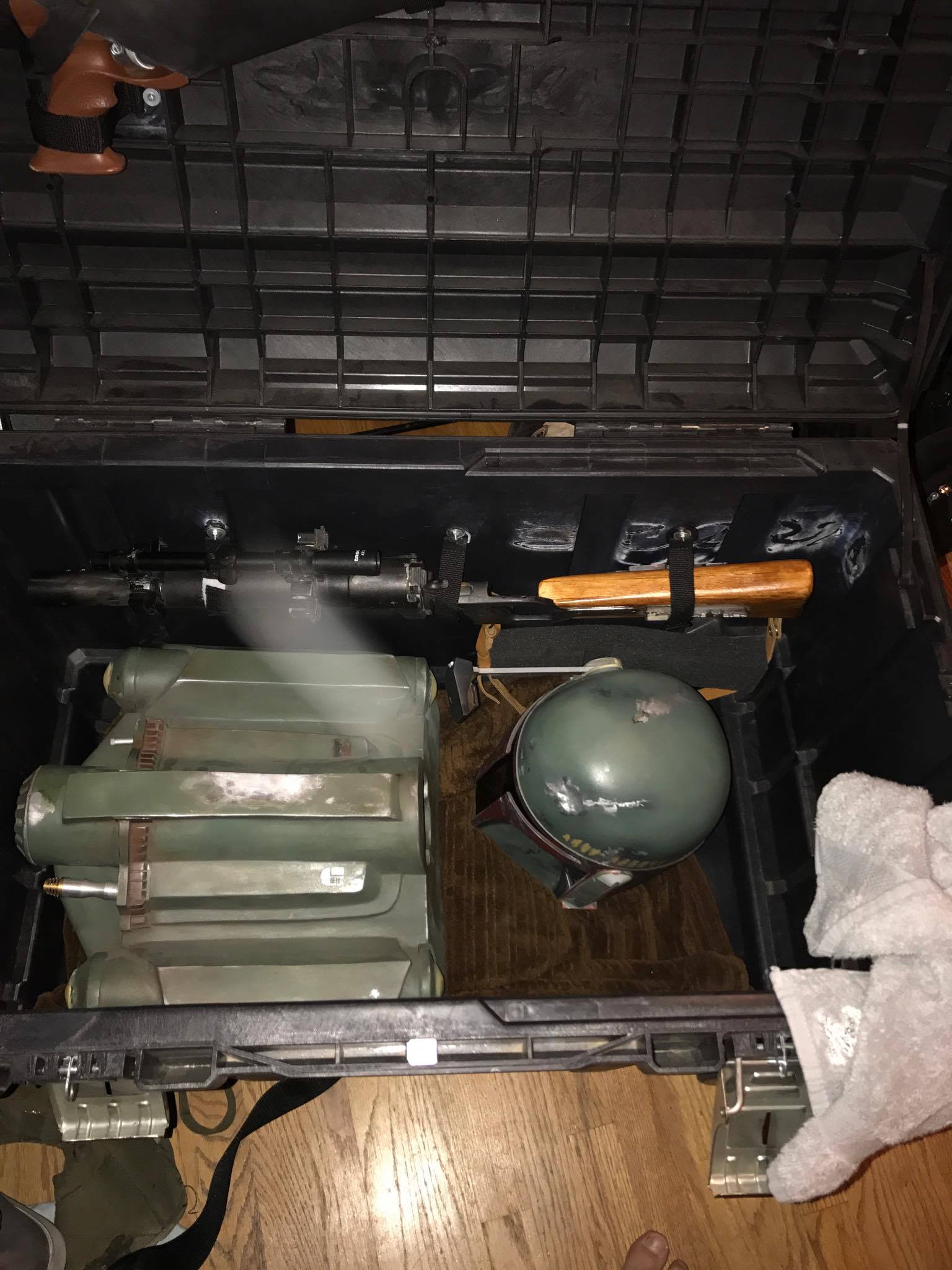 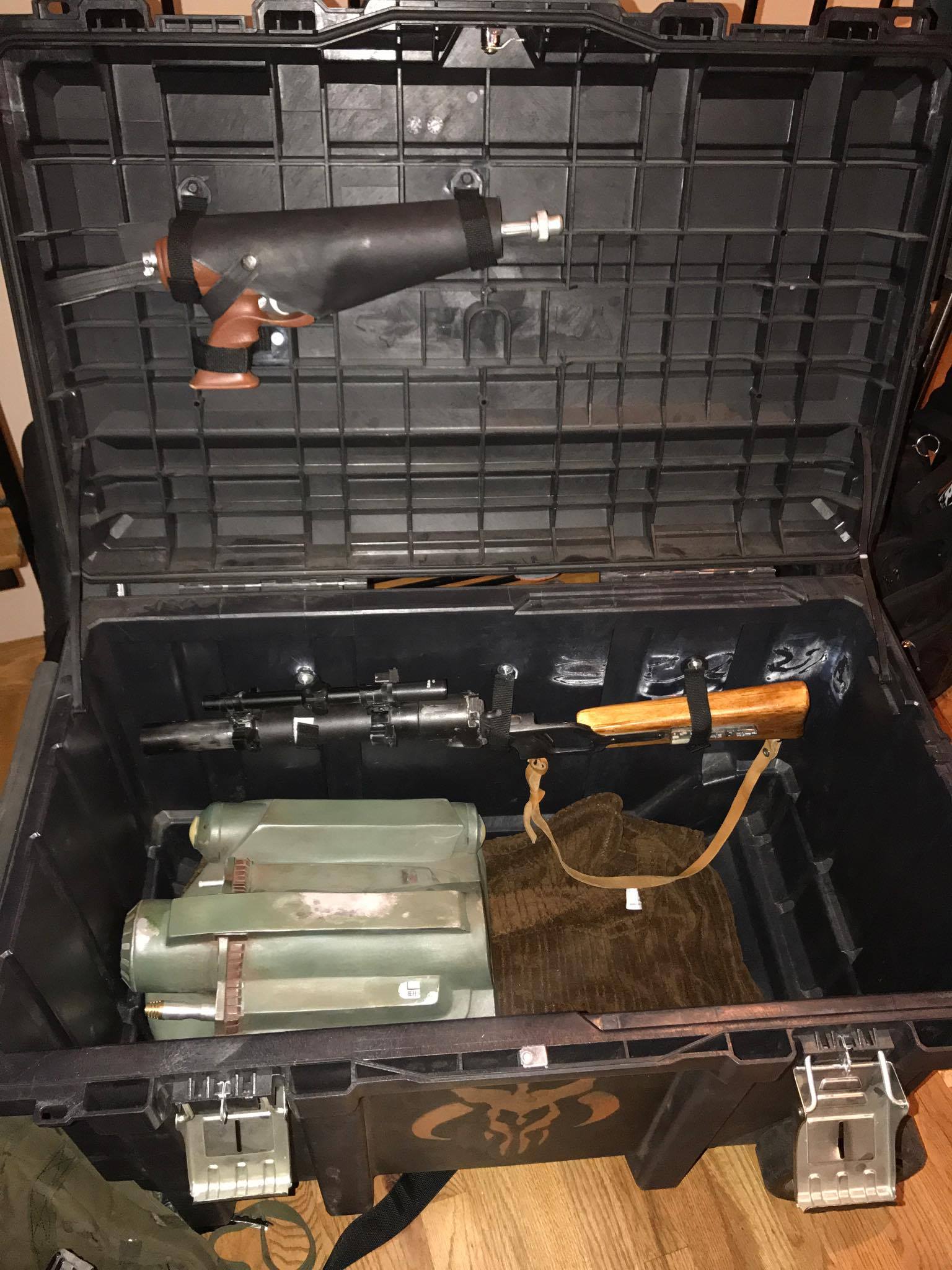 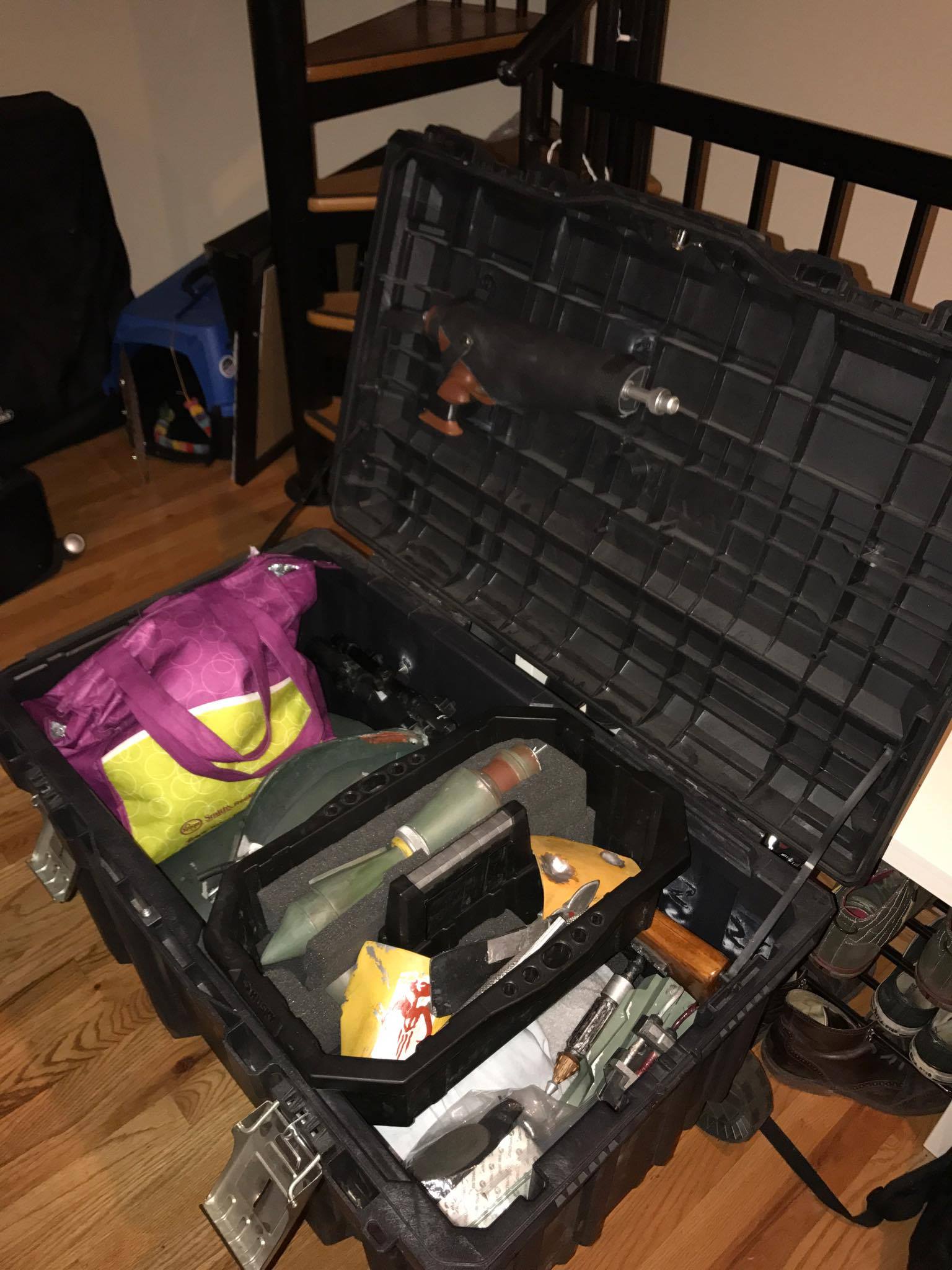 Nice job man. I put a video together on putting the costume into a simple Plano sportsman trunk from Walmart that most TKs use. Everything fits minus the helmet, which goes in a padded helmet bag.

Very similar to my set up for my ROTJ Fett done with foam padding in that same case, except I must stand up the jet pack or fluid leaks from the smoke generator, but I still have a bit of space in the floating tray for spare batteries and zap-a-gap. I think fitting everything into one container is better for me, less chance to lose items! However that case is almost a trailer on its own, barely fitting in our Outback...

Great post. I use the same bin and got all my stuff into it a couple weeks ago and was kinda shocked it fit. I was trying to figure out how to get all my stuff to Celebration at the time.

Sweet man, thanks for the help, I am currently looking at trying to find something to stuff it all in.