I think he just called you beefy!
J

i mean beefy in the nicest way possible........in that "don't mess with me, i'm fully capable of tearing you limb from limb" kind of way.
J 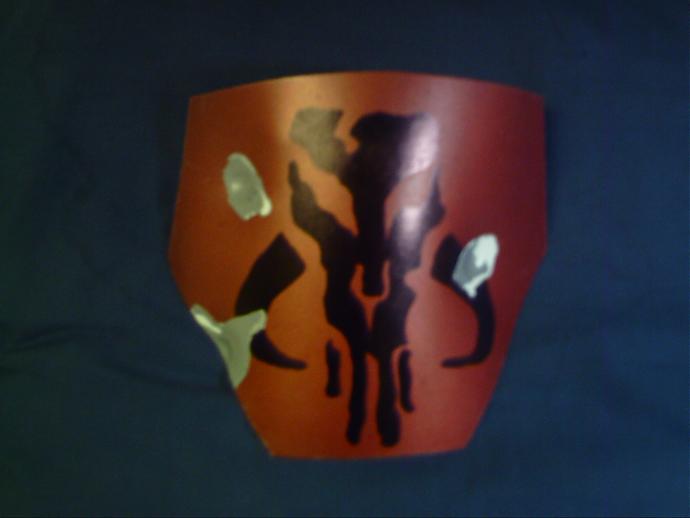 I'm not offended by bieng called beefy. I'll be the first one to say I'm a BIG boy. I'm in the process of building new XL set of armor right now cause the set I bought was way too small. It would be great for someone smaller.
J

i decided to go for a slight personal touch to my gauntlets. I am Canadian, and i'm fairly proud to be so, but i'm also in love with the Mando culture. so i thought i'd blend the two a little. i figured i'd mark one culture with the other. 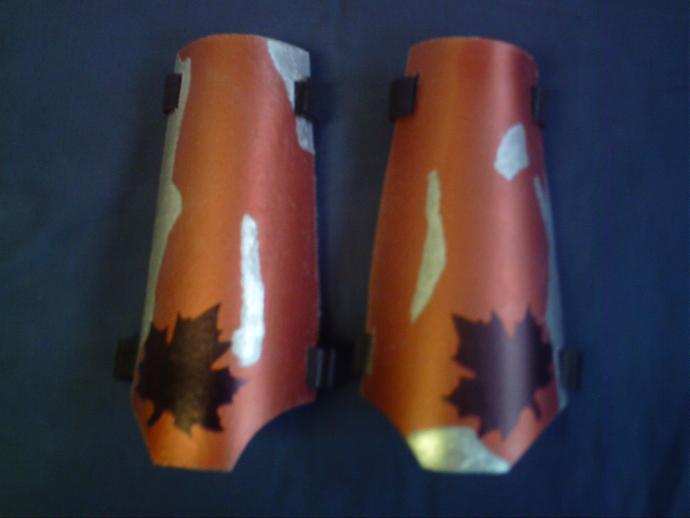 Well, since I plan on using my armour for paintball, I also plan on making my paintball marker look like a prop. Being a big fan of not only Mandalorians, but the Republic Commando's aswell, I'm going to mod my gun to look somewhat like the DC-17. Wizzard Of Flight responded to another post I had started inquiring about specs and pics of the Deece. He has some great autocad pictorials of the gun, so I've spent my evening scalling these pics to my current paintball marker. So far so good. I'm not going to be doing every little detail right of the bat. Just the basics for now to make it seem more like a weapon from the Star Wars realm. I'll probably be spending a good chunk of my day tomorrow building the first parts of cardboard, seeing how it will actually line up, and using those as my templates. I'm hoping to make the peices out of PVC, which is what I'm planning on making my helmet out of aswell (one of these days). Speaking of which; anyone out there from the southern Ontario area that knows where a guy can get PVC in sheet form???

Not to go OT. But do you mind me asking what kind of marker you shoot?
J

right now i've got a Zap AMP Reactor, but i'm hoping to move up to a
BT-4. I'm not sure yet how I'd want to dress out the BT-4, but it's a ways off for me anyhow. I love the way that the Reactor functions, i just don't like having the top mount hopper. I want something with a cyclone feed so I could mount a scope on the top and sight down the barrel. however, next on my list is the Tiberious 8 pistol.

Yeah the BT-4, Tippmann's, etc. are realy cool senario guns, when I play senario I use a Spyder MR-2, and an Ariakon Overlord pistol. I didn't want to be striktly military, and both sorta remind me of more Sci-Fi esq. gun. Sence I like Sci-Fi I was sorta drwn to both, lol.

But The Tac-8 has to be one of the coolest paintball markers in a long time senario wise, but the price is sorta a turn off. I sometimes wish I would of held out and bought one as apose to my Overlord though.

I play mostly Speedball though, so I didn't want to spend "alot" of money making a Tippmann marker look like a gun, because I also play airsoft. Do you play stricktly senario/woods, or have/do you also play speedball?
J

I haven't played much speedball.....which is somewhat of a shame seeing as the Reactor is pretty much made for speedball. mostly we play a lot off scenario in the woods. i'm looking at puting a longer, rifled barrel on my marker to give me a little more distance and accuracy for woodsball.
J

okay, here's what i got working on today. It certainly won't be an exact replica of the Dc-17, but it will at least look Star Wars enough to go with my armour for paintball. I've come up with a piece for a shoulder stock, nothing fancy, but it flows with the lines of the gun.......or at least, what the gun will be. I think i've even figured a way to attatch the stock once i get the rest of the cladding done for the gun. I'll keep posting as I keep working on it. 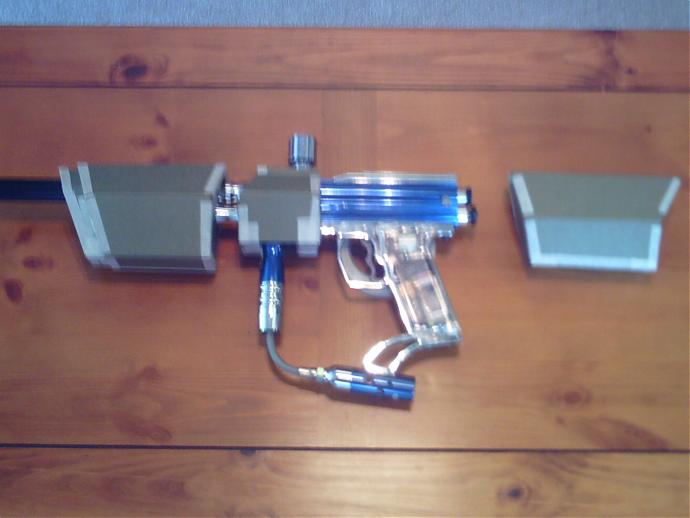 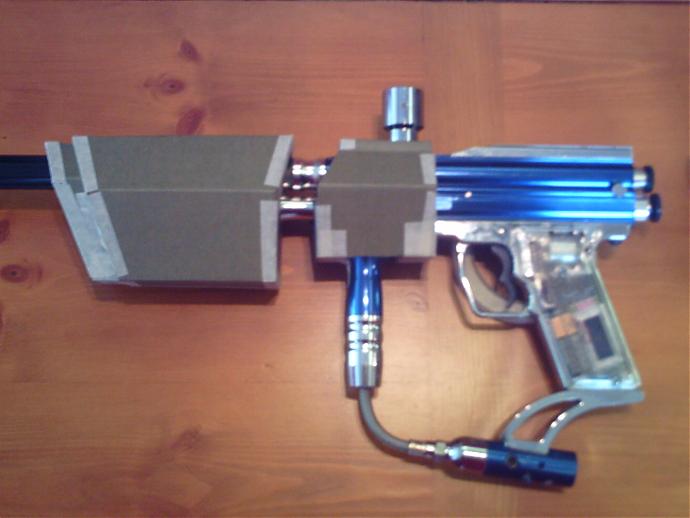 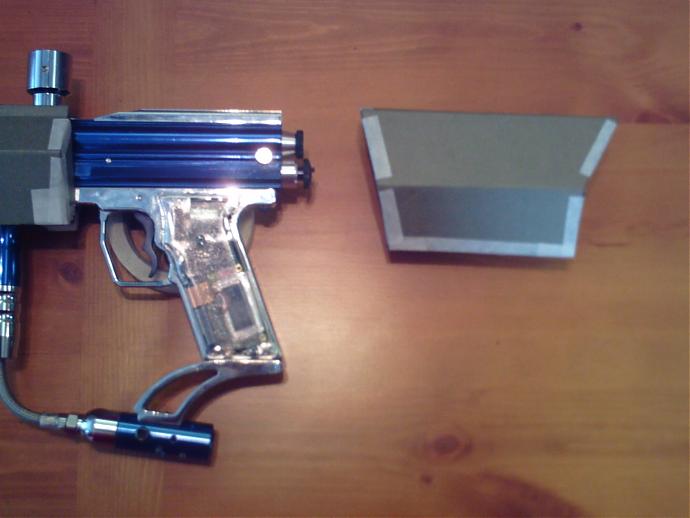 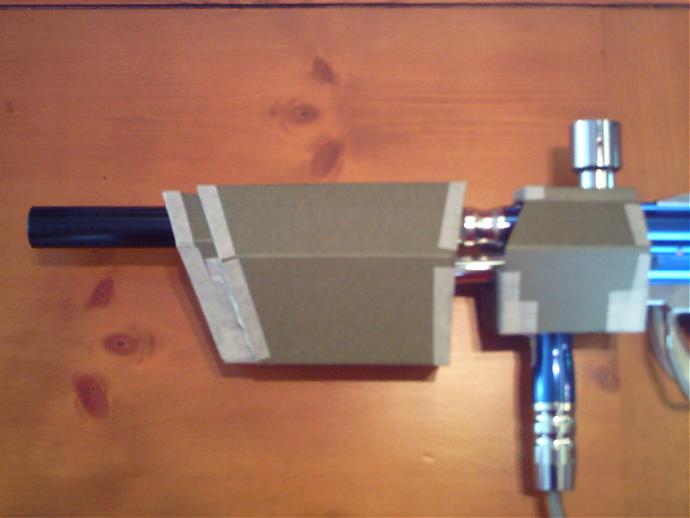 Makes me want to buy a paintball gun to mod

I look foreward to seeing how your mods go!:cheers

Yeah, I use a SP Ion for speedball, I prefer it as apose to woods play, but I'll just about do anything.
J

well, the mods on the gun are on hold for a little while. i've just been working to much lately to really put the time into the detail i'd like to do. in the mean time, however, I've continued on with some of the armour after a quick trip to wal-mart for another trash can. I also started on some fem-mando armour for my sister. I'll probably post more about that somewhere else as that one comes along. in the mean time, here's what i worked on today. 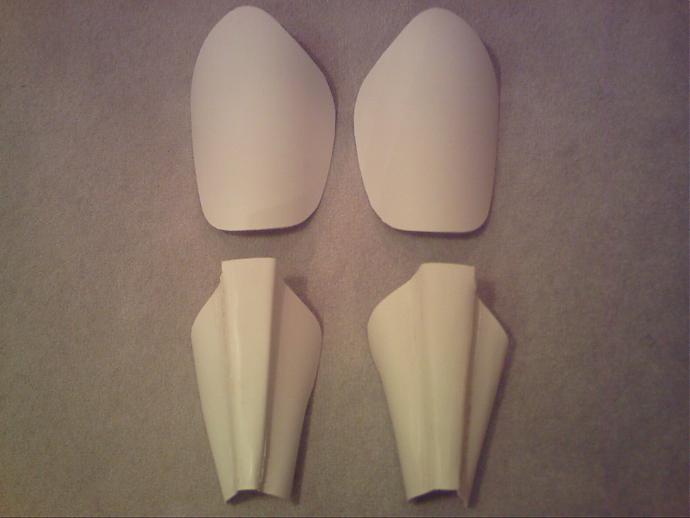 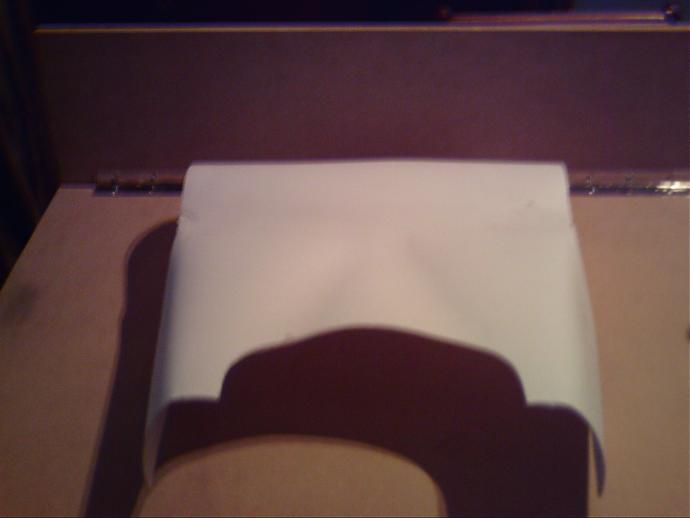 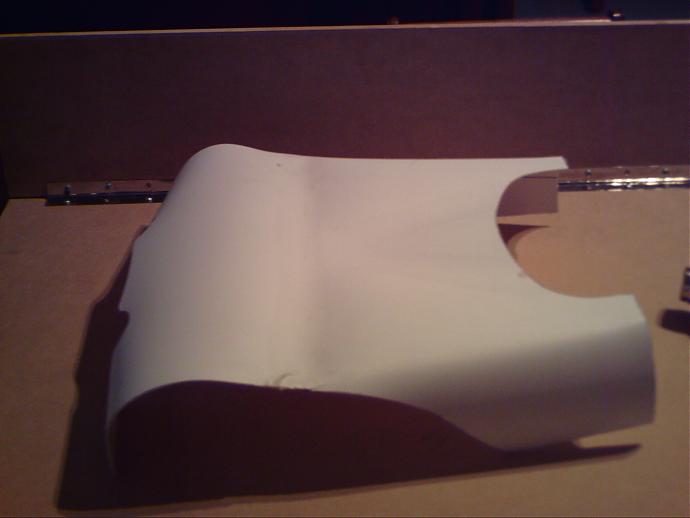 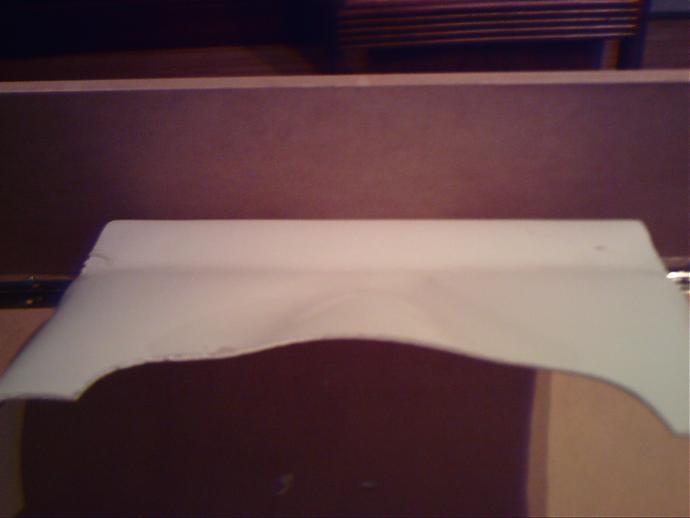 Looks good. I don't remember if you said before or not, but... What are you using to shape the plastic?
N

t_bone, all i use to do any shaping is a heat gun and some gloves. I'll use the occasional bit of lumber or sometimes my two foot level for some straight edges for hard bends, but other than that, i just heat it till it's almost melty, and hold it in the shape i want until it cools.

well, i tried out the armour in paintball today. I was curious to see how my second paint job was going to hold up, and it did really well. there wasn't any paint chipped off of it at all. the only problem i did have was the medalion on the chest armour that i welded out of two peices with a soldering iron broke apart. I'll have to figure out another solution for that, or just make sure the weld is much stronger for next time. other than that, everything held up well. 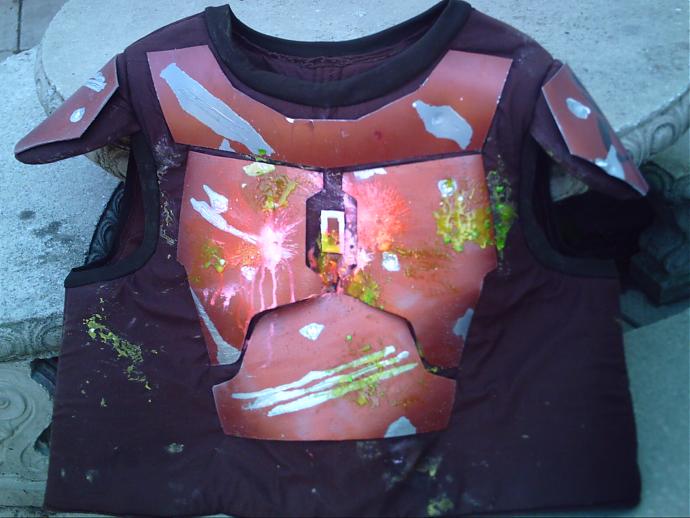 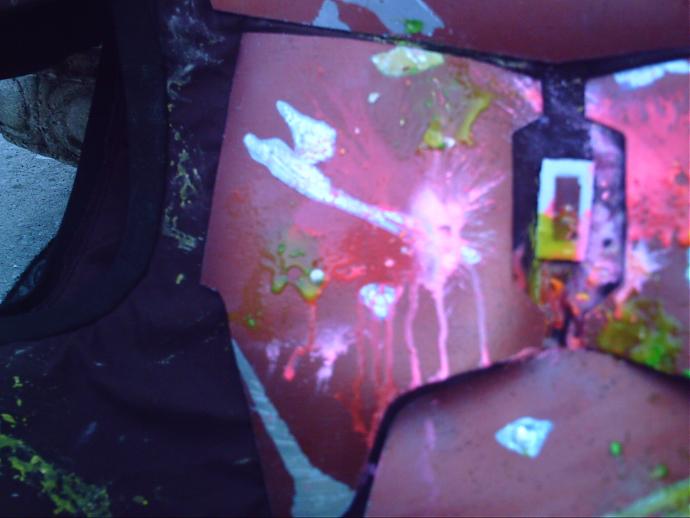 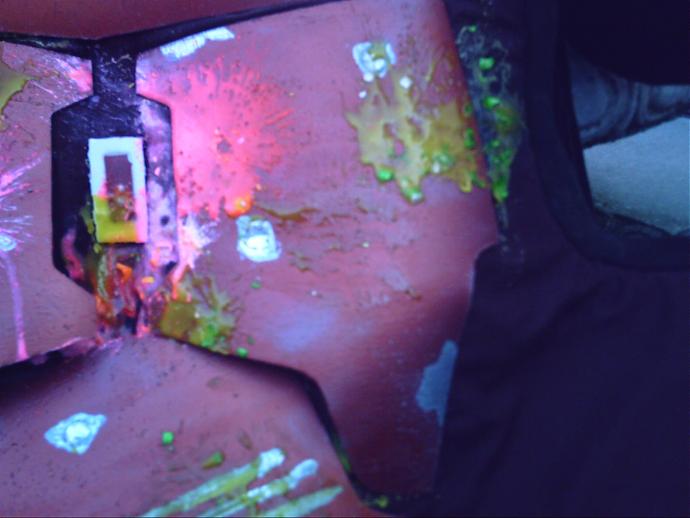 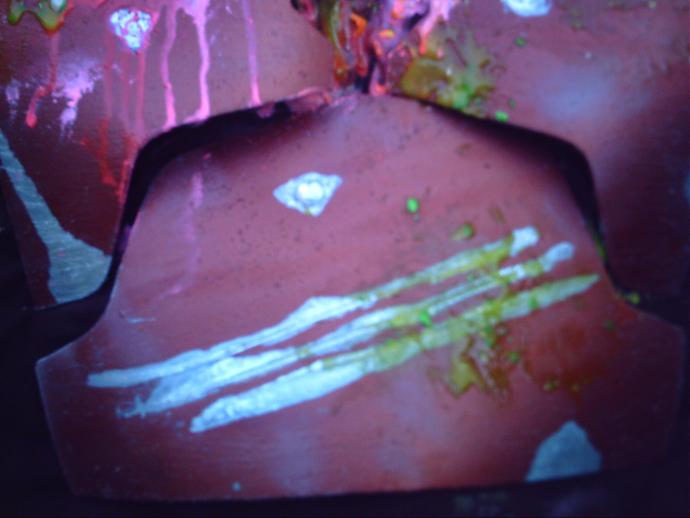 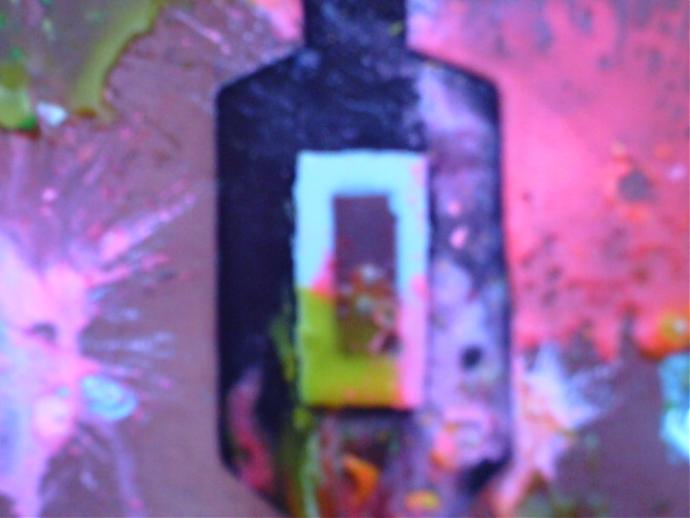 A Simple Man Trying to Find His Way in the Galaxy Build- Pic heavy!
2 3