Hey all! Kind of new here, though more of a lurker. Now I'm coming out and showing what I got. Well kind of, most of my ideas are still in my head.

I'm working on a 3D model of my armor so I can get a better idea of what it'll look like once I'm finished. I'm calling this UNIT-01 becasue I plan on modifying it heavily in the years to come once I acctualy build it. for now, it's just the simple Fett set up with custom paint/accessories.

Well anyways, here a pic with notes. I used a SWG armor pic, but I'm not exactly going that way. I'm not even sure of the color scheme I'll use. Maybe camo, or gillie suit? 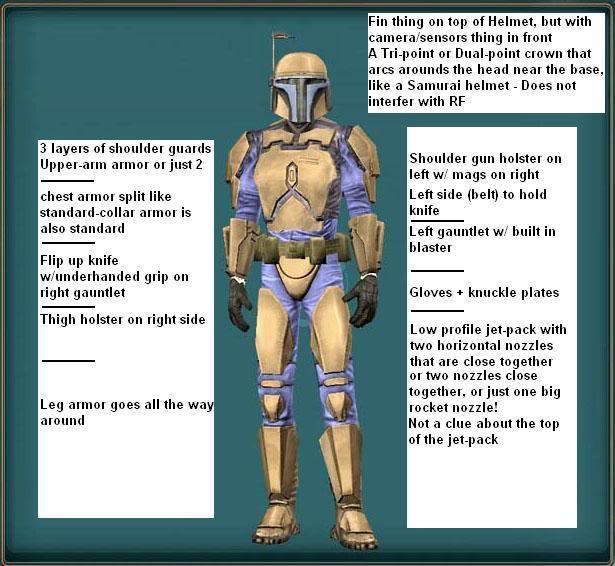 The design of the armor follows the character in my fan fic, which I'm hoping to turn into a fan film. He was accepted as a Mandalorain durign the Clone Wars by a Mando training sergeant (one of the Cuy'val Dar, not a clone). The crown is a rememberance of an earlier (unknown) war he had participated in. I just added the fin because of the fact that he served on board a Acclamator-class assault ship, and basicly became like family with the most of the clones aboard.

I'll post the story up later, and the 3D images this weekend once it acctually resembles armor. Any C&C would be welcome, thanks!
Last edited by a moderator: Dec 11, 2006

yeah dont do the SWG style armor its just plain unpractical
and uh the camo mando sounds good,i had that idea once too

Community Staff
I have a custom design with camo though one good thing to keep in mind when doing camo is possibly have your armor be a solid color and your fatigues be camo or vice versa so to have the design stand out and create a small contrast. If you go the route of a ghillie suit I would suggest making it a shawl or cloak so as not to interfere with your armor.

I always wondered, why do people think the SWG mando design is impractical? It slightly enhances mobility yet not technically sacrificing protection.

Other than the knees i can't see why someone couldnt do an swg mando suit.

Actually, now that I think of it, why not make a Mandalorian Gundam? Easily doable. Just need a huge gatling gun and beam cannon in the middle8)

Of course I might just drop the crown. Well, at least for now.

Small update. No armor yet, but that'll come soon enough. right now I'm just making the body to put the armor on. Here are two pics of what's goin' on so far. For relative size comparison I put in a low-poly tutorial helmet for a chopper pilot.
Oh, and all the sections you see won't be on the final product. Infact, they'll be covered up. The renderer is just rending all the triangles that make up the mesh. And what you see on one side, is exactly the same on the other. If your curious, I'm using 3DS max 8 to do model this out. 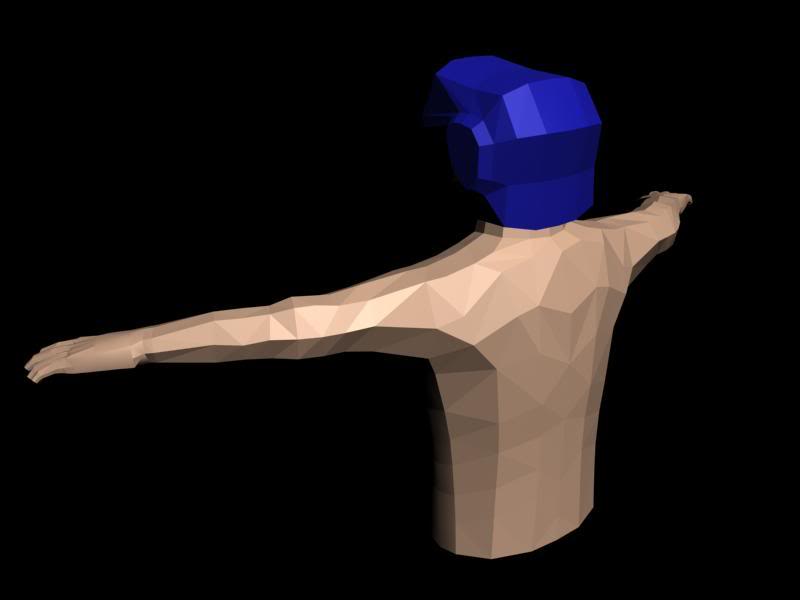 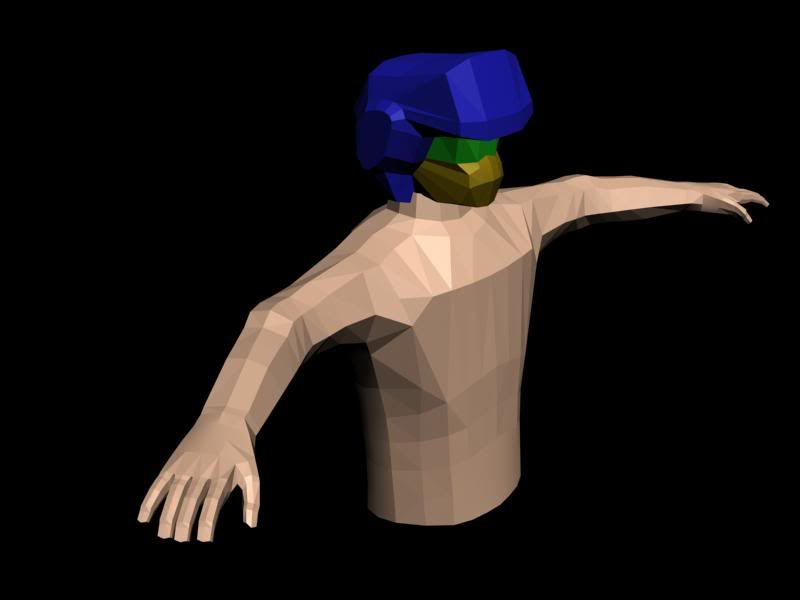 When all is set and done, I plan on offering 3D templates for ya'll. If you have a design, and want to see what it look likes in 3D before you tempt the paint brush, let me tempt the keyaboard and help ya see your final product! Will be some time in the making, but I hope it helps out when we're are designing armor :cheers Though as for dimensions of custom pieces, I can probably work something out with another program I have.

Anyways, any and all C&C would be appreciated. Especially since I'm still learning the program.

what program (forgive if you say some where eles) are you useing? i think its intresting what your doin here. my friend who goes to an art school did a 3D rendition of my armor/mando.
G

3D Studio Max 8 is the program

Thanks gamer! Just pulling, pushing, adding, deleting verts and such. Kinda similar to Rhino 3D, which I've been working in for about 3-4 years now. Not all that similar, but enoguh to know what a line is.:wacko

Hey tandish, can you post a couple pics of the 3D model? Would love to see it.

given this is my friend who is in art school for game art...... and he had about a week.

HOLY CRAP! That's a nice model your friend made. Textured and everything, wow. Thanks for the reference. The hands sure do look a whole lot better than mine. How long as he been in 3D modeling?

I made a 3D model of the Fett helmet that I made. I could e-mail it to you in .3ds format if you'd like
T

Sure thanks! What kind of modeling did you use to make? I was thinking using plane modeling on it like i did the body, but did you use something different?

I haven't been able to touch my model because I've been painting my house to get ready to sell all weekend. I should have an update on the waist/legs/feet later this week, and next week I'll work on the helmet. I'm leaving the gauntlets for last since those and the jet pack should be the most intricate.
G

I don't even remember how I built it. I may have just made a box with a ton of polys and chipped away at it. I modeled it like a year ago. E-mail me at GCNgamer128@aol.com if you want it
T

I've been tihnking of the main weapon, or atl east one of the main weapons, and I came across this mauser airsoft rifle that's modeled after C96 Broomhandle Mauser pistol. I've seen a low price of $100, and from what I understnad, the reviews are kinda good as an airsoft.
I've seen cheaper, but I'm using this link because they have bigger picture than everyone else:

I was thinking that if I could get this (if I can get mulla without a job:rolleyes) I can customize it to resemble the DL-44, but as a DL-44 "LS" (Long Shot) or "RO" (Rifle Option). Personally, I like the Ls designation. anyways, so what do you think? A scope, a couple greebles... It could look star warsy.

EDIT: Of course that's really expensive and I don't have that kind of mulla. But it's a nice thought. Now that I think about it, I'd prefer a Famas airsoft since it's cheap, ya don't have to modify it all to look sci-fi/modern, and I don't think it's all that well known, like the FN P-90 before Stargate SG-1 started using it.
Last edited by a moderator: Nov 7, 2006
F

the broomhandle mauser is a good idea if you dont mind having the same gun as han solo... cut the barrel shorter and add a flare to it... paint it black... add weathering
T

Not really an update, but these are accessories I'm shooting for. Perhaps not these stores, but at least they have the pictures:

Main blaster; A CYMA spring loaded airsoft Glock 26 with muzzle and and clip attachments - this would go in the thigh holster http://www.hobbytron.com/AirsoftPistolGunSpringMCAPP698.html

Back up blaster; An electric airosft pistol, replicating the look and size of a Vektor CP1; would go in the shoulder holster - although hobbytron says it's James Bond's gun, IT'S NOT! He uses a Walther PPK, and later the Walther P99 http://www.hobbytron.com/ElectricJamesBondAirsoftGunBC2030B.html

What do you guys think?

And just for reference, these are James Bond's guns:
Walther PPK - Used this for most of the movies
Walther P99 - Pierce Brosnan used this in all of his James Bond movies