intwenothor said:
I don't think I'll be buying one (not that I'd need to ). I don't understand why he chose to obliterate the fine details fom his EE3 such as the company name and model and serial number especially when he hasn't on the snub custom thingy based on the mk 3. I appreciate that the serial numbers will never match but the ROTJ prop clearly shows these markings and seems strange to miss them out and a waste of effort alter the mold to hide them. Also why not just do a straight up ESB instead of the custom thing; I'm sure there is a bigger market. If I were in the market for a resin blaster I'd definitely wait the extra time and save a bit more for the sidewinder kits presently available (or stormrider if he's doing them again). In my opinion those SW kits are he best out there.

I like the revolver. I toyed with buying one of these a while back as it looked like an interesting piece but didn't really have the spare cash. Yours looks in great nick though. I agree about the bayonet as being a bit of a stretch and question the stock/carbine attachment too but it certainly looks good.
Click to expand...

I'm thinking he might have used one of the scrubbed FBI versions for the base, and that may account for the missing marks.
A

I see it as a good starting point. After what I've spent on the other components, this is a good placeholder until I have the resources for a more accurate, high-end rifle.

It's possible. He certainly doesn't big up these genuine details of his EE3 like he does his molds of his mk 3 which show resin version and original side by side. The price looks appealing but I'm unconvinced. I appreciate I don't own one of these but the pics are pretty detailed. I don't own a SW either but to me that would be the better option.

Thanks man, information like this is gold dust to me although of no immediate application to our purposes; I am afraid that I am a really quite a dull person as I am quite happy to spend weeks researching this stuff. The trouble is that I get so easily distracted. A while back research into MPP flash units caused me to take up large format photography (rewarding but time consuming) and more recent research into Sweep arms and Stylus brushes has caused me to find myself restoring this: 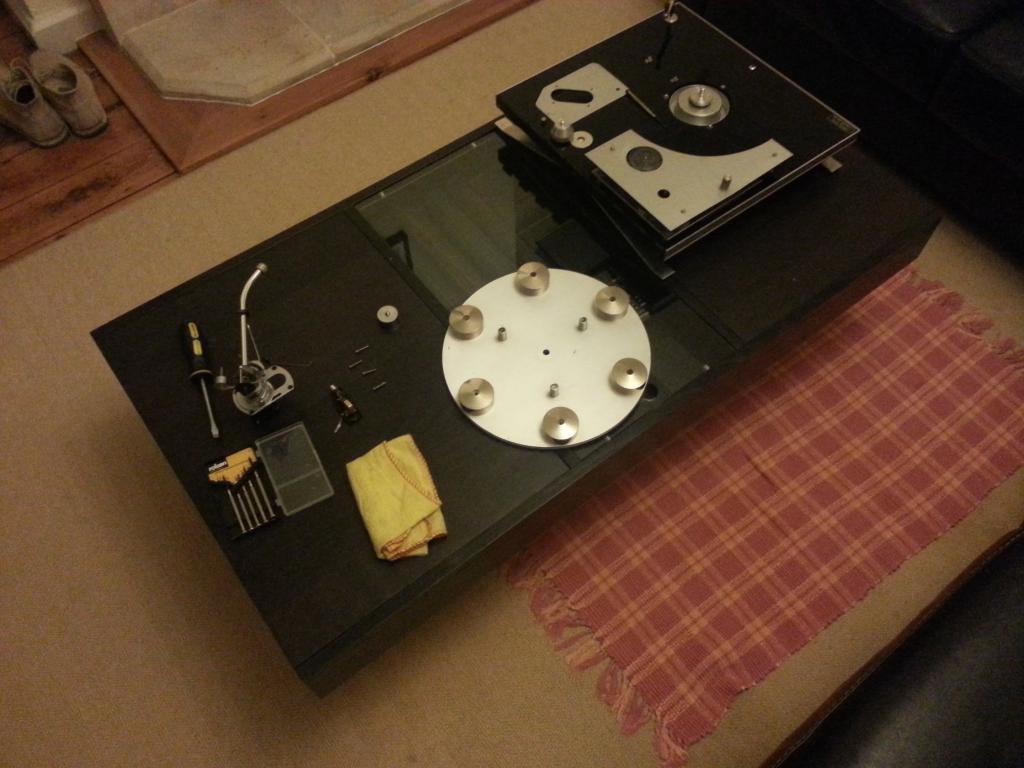 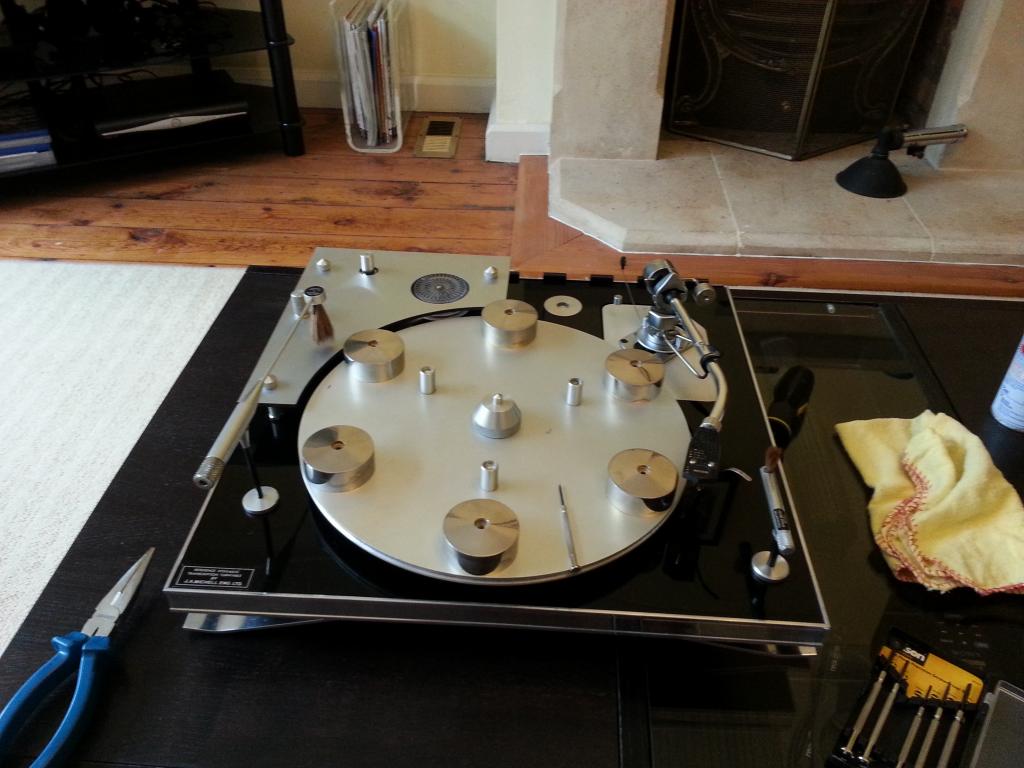 It was in a hell of a state having been neglected and abused for over two decades; to get this far took three weeks of cleanup every evening for about two or three hours a night - dirt, grime, covered in the hydraulic fluid which had solidified and also something corrosive that burnt my skin. Loads of work still to be done. I'll post in the Sarlacc pit when she's done! This is all time that I am not working on my Boba!!!!!!!! Will he ever be finished?
A

Decided to buy on of his blasters too. The quality looks good and the guy seems solid answered questions real fast.

I was reviewing the information here this morning and realised that some of it seems less than straightforward with regard to the cost/price of these units. Even though I was born after decimilisation in the UK it was not that long after and everyone, including my parents, still thought in 'old money' so the prices I quoted make sense to me even though I never actually used them! I have realised that to most, especially non UK, they are probably utter nonsense so to help explain the price a little better we need to have a quick review of pre decimilised British currency. I'll use the 30th March 1915 price of '65/-' for the calculations as it makes the arithmetic a lot easier...

So, a pre decimal British Pound sterling contained 240d (240 pence) and this was because originally 240 silver pennies weighed (you guessed it) 1lb of sterling silver (this measurement is from the time of Henry 2nd in the 12th Centruy). A 'shilling' was equal to 12d and thus there were twenty shillings in a pound. So '65/-' is the same as three pounds and five shillings / three and 1/4 pounds or £3.25.

If this seems like it might be cheap then do bear in mind that Inflation calculators are crude and don't truly account for the relative differences in the economics of now and 100 years ago, that these flare guns were cheaply produced items as demonstrated by the fact that many different models share identical parts. They were also made in a time of war and goverment purchasing power in a time of war is different to that of a private individual. Even accepting these things the first order of 50 would still have come to around £15K in todays money.

In any event I hope this is a more understandable price than '65/-' which probably meant nothing to many.

Fascinating. Thanks for the history lesson, Andy!
B

Thanks Andy for the detailed background!

This is a really interesting thread, has any one had any more experience with a real webley since? Any new owners? Id like to pursue one but feel a little bad about essentially destroying a piece of history. Love to have the weight of a real gun though.

I plan on destroying mine in the next few days! Been working on some mods for some parts this very day.

Andy, I don't know what I like more, the things I learn from you or the glazed over look when I try to share what I learned with my girlfriend....... Lol.

intwenothor said:
I plan on destroying mine in the next few days! Been working on some mods for some parts this very day.
Click to expand...

Are you mental?! Seriously, don't share this with your girlfriend. This is not the sort of thing women care for. I'm a really, really boring man. Next time she gives you the glazed look you could remind her to be thankful she's got you and not me; my poor Liz!

Today's treat for the long suffering Mrs I; a discourse on the merits of accurate helmet visor clips. Lucky lady.

There are several quality EE3 makers here; Stormrider, MLS, and Sidewinder. Personally I dig the Sidewinder kit but they're all good so if you want one then those three guys can help you out.

Yeah those sidewinder kits are nuts i hope he becomes available for one. But i havent even messaged him yet. Thanks for the help !

I've gone to him for several projects albeit never one of his complete kits. I wouldn't expect the wait to be outrageous. I've only really gone to him for non standard items that he doesn't usually make and he turns those around pretty quick (like a fortnight to three weeks). I'd think the wait on a kit would also be weeks rather than months but I'm only speculating. A fully built kit is presumably longer. He'll tell you if you message him. I have no idea on the prices for him or any of the vendors.

Thanks dude i think ill hit him up soon

were the pointed nut things used on the interrogator droid?

From the turntable?
J

I realise this thread is quite old, however it is the most relevant one I could find relating to my question.

I have recently come into possesion of this Webley flare gun, and I have absolutely no experience with firearms at at all. It seems to be in pretty bad condition, Im just wondering is there any sort of resale value, or would it be best kept as a memento. I've tried to include the serial number on it in case that has any bearing on price etc.

Hopefully this thread isn't buried after such a long time!

Many thanks in advance,

Yesterday at 4:58 AM
spicy fett

Yesterday at 4:58 AM
spicy fett