That's one hell of a first paint job.Awsome work.
G

Simply great work happening here. You should be very proud!

Thanks for kind words brothers. Need to do some weathering and looking for some tips. Might have a daylight opportunity tomorrow. Grateful for help.

Got a colour for the lower cheeks (23 or 28 - can't remember).
What do people use for the dent and scorch? I don't just want to wade in with black.
Any tips for the lighter green weathering around the stripes?
Any weathering tips for the back panels? They look pretty grubby in the efx video.

Thanks for your help precious.

Paint job looks great. Try grey 32 to add weathering/ shading on the back panels and lower cheeks also for the dent scorch mark. The lighter green below the kill stripes I use white thinned down and applied topically with a brush as the ref pics...
R

No update for a long time but managed to get a few shots of some weathering in the daylight. There is still more to do but largely of topical nature and I'm starting to feel that this is nearly there now.

I went pretty light with the cheek and back panel weathering using a few passes of grey 27 as I feel it achieves a better look with it being lighter than heavier but that's just my preference although in these pics they appear somewhat lighter than they are. The dome scorch I used the same grey 27 for a couple of light runs in the general area and then used a few passes of a darker colour (might have been grey 79 - I forget) to bring in some of the daker areas rather than lay on more of the same colour. I used the same darker colour for the spot over the rangefinder ear. The areas around the stripes was done with the main green (78 I think) that was toned down with a bit of matt white (34).

I probably gave the most thought to the two white smudges. For some strange reason I found doing them the most fun. I simply put some paint of my little finger and smudged it on there (so, finger painting basically) and then touched the smudges up a bit with a fine brush; I felt they had probably appeared by just such careless means in the first place.

Then I gave it a gentle buff with the wool and popped it in the sink with some fairy and gave him a wash.

Visor placement is temporary for these shots but it just looks naked without one there. 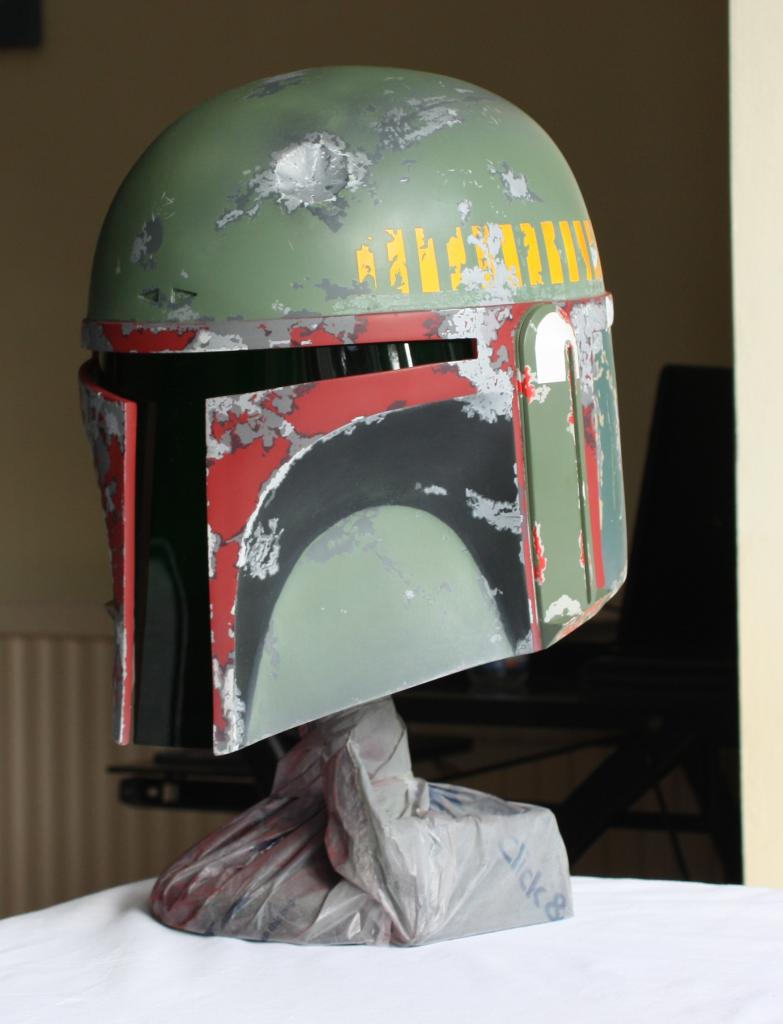 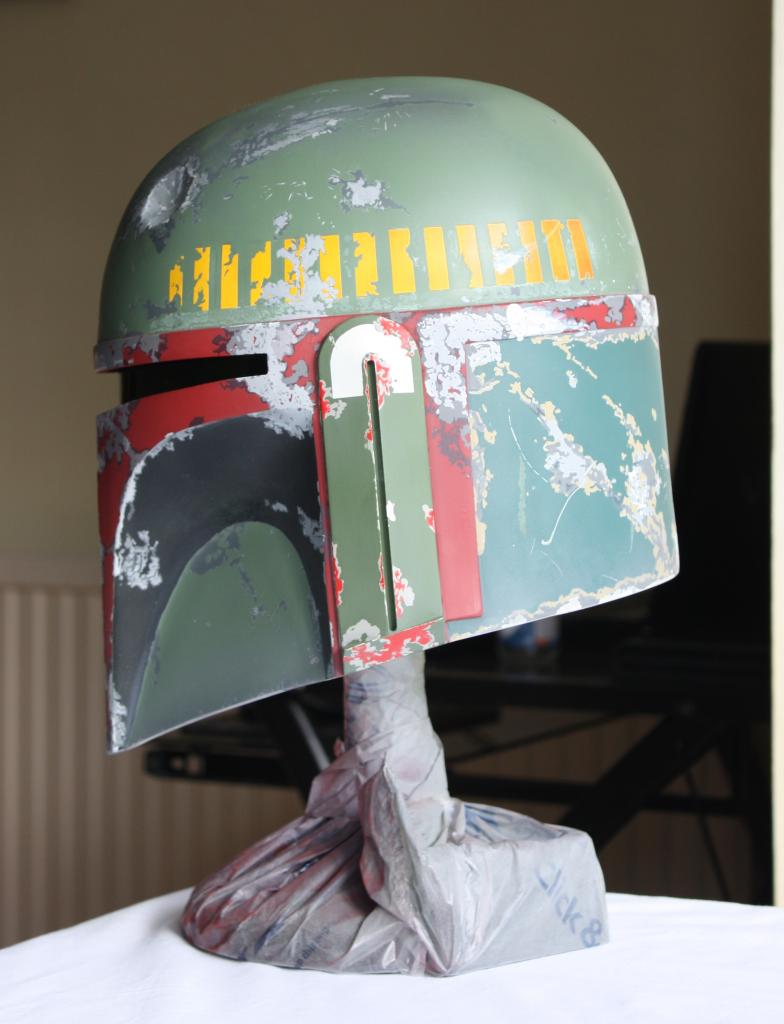 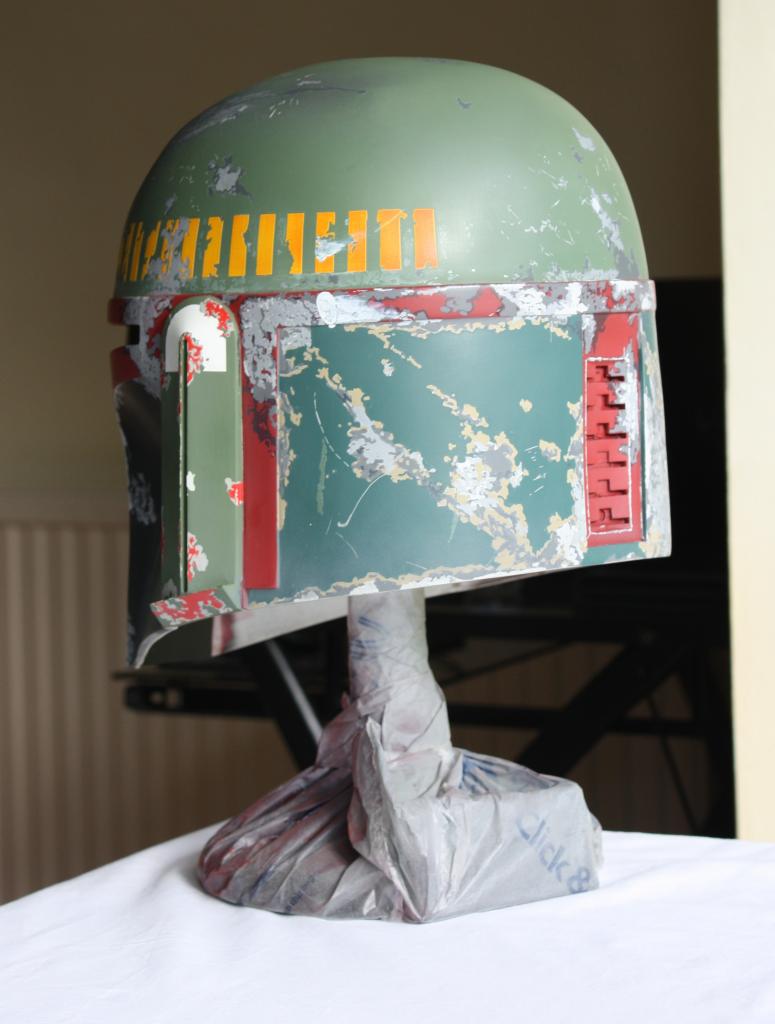 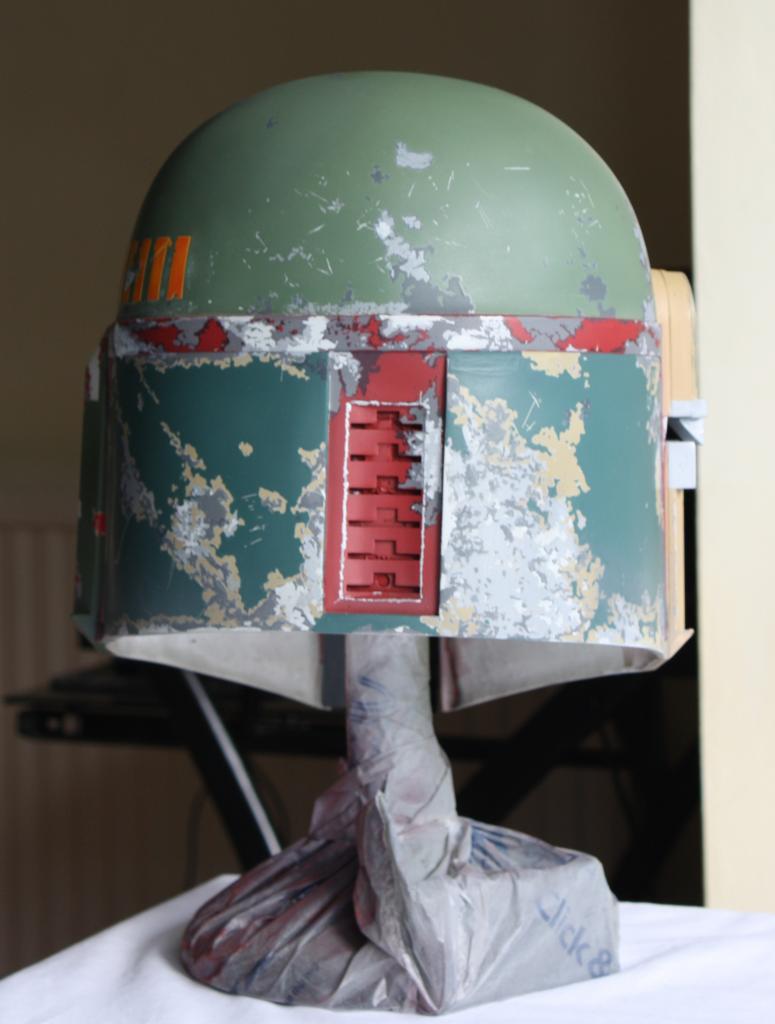 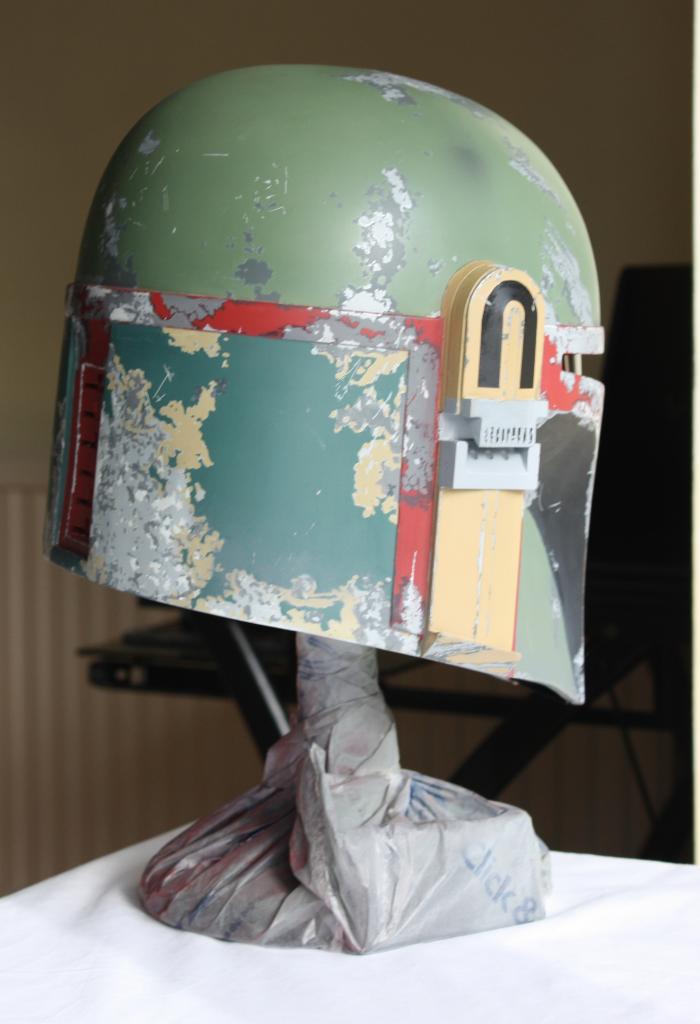 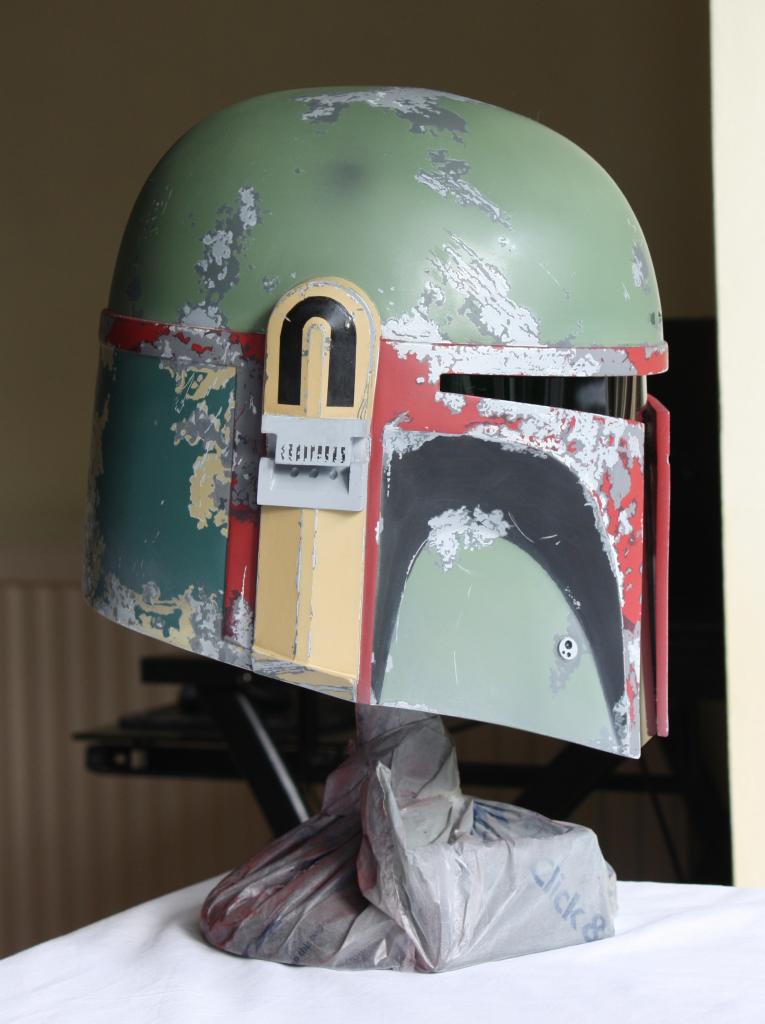 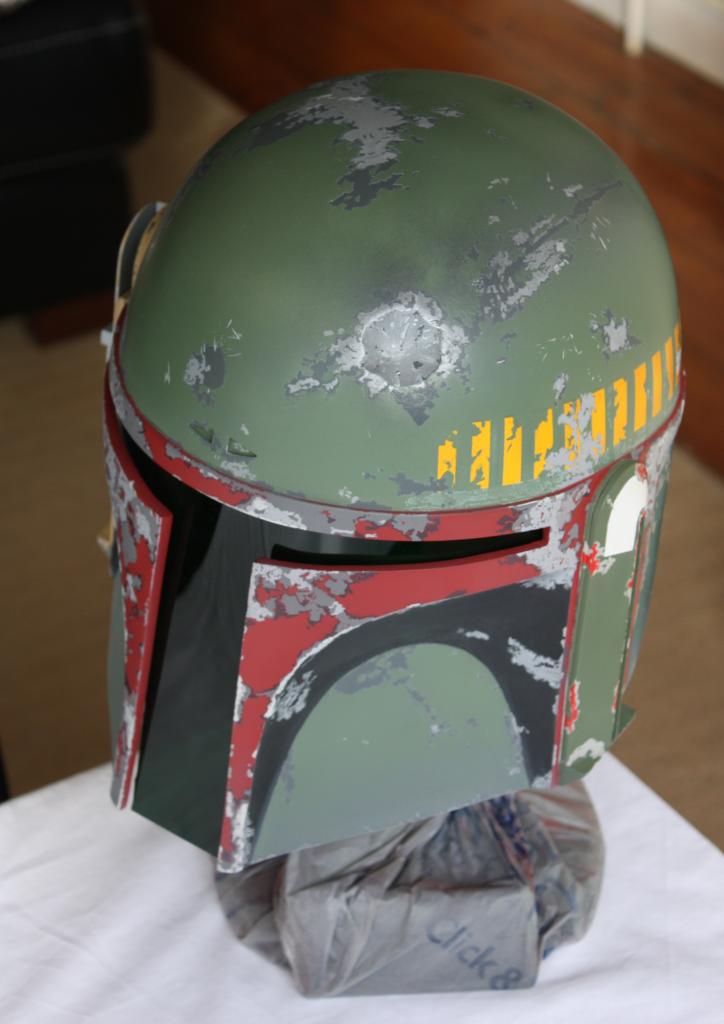 Preferred Vendor
Nice work dude, are you sure it's your first time? Lol

Thanks men, plenty still to do but thanks for the kind words. Might go back in for some of the smudges on the right cheek and lots of other areas to go into. Put the visor in to tie it together. Need to start on the RF.

Helmet looks great. I hope my first paint job looks as good as yours.

it never really progressed further than in the last photos. I think I may have added some tiny bits and pieces but nothing worth posting new pictures. This was the second Boba helmet I owned after my production MR Boba SE helmet. If I recall correctly, I obtained a couple of GMH helmets before I did further work on it thinking, at the time, that the GMH was a superior cast. Ultimately, that turned out not to be the case, as has been documented elsewhere, although I still view the GMH as an important cast because it was the first time such a lineage cast had been publicly offered, despite the limitations it has.

I kept this helmet because it was my first paint of a Boba helmet and because I am still of the view that the corrected MR is still one of the best, and most important, base casts that has ever been available; the MR proto casts moreso if testimony is correct. I have never seen one in person.

I did a fair job with this but it has that paint by numbers look that a lot of paintups, including some commissions, can suffer from; I tend to view it as a learning experience. This was my first time using an airbrush. I've since learned other techniques to improve my painting although I'll never be a Major or one of his peers.

Thanks for the kind words, which I appreciate, but how did you even find this thread?! Hahahaha. It belongs in 2013/14, which is the last time anything meaningful was put up.

It's worth adding that the excellent terminal fettler Humbrol list, with Jayvee ammendments, which has been added to, and improved, since this was done is a real piece of work!

Those guys, particularly TF, have been the gift that keeps on giving when it comes that range of colours - Thanks guys! There's a real dedication to the hobby that might be overlooked in the current climate. TF was leading the way in a non Floquil world. I often think that in real terms we haven't actually made many significant leaps in the last ten or fifteen years.

Yesterday at 2:28 AM
FamousFett