Non TDH EE3 Resin kit..
I have a TDH EE3 on back order but bought this one also...
Was kind of a mess... lots of sanding and it’s almost there. Not happy with the pistol grip color so I’ll do paint hunting.
Sling needs to be darkened a bit..
This one will be a backup. 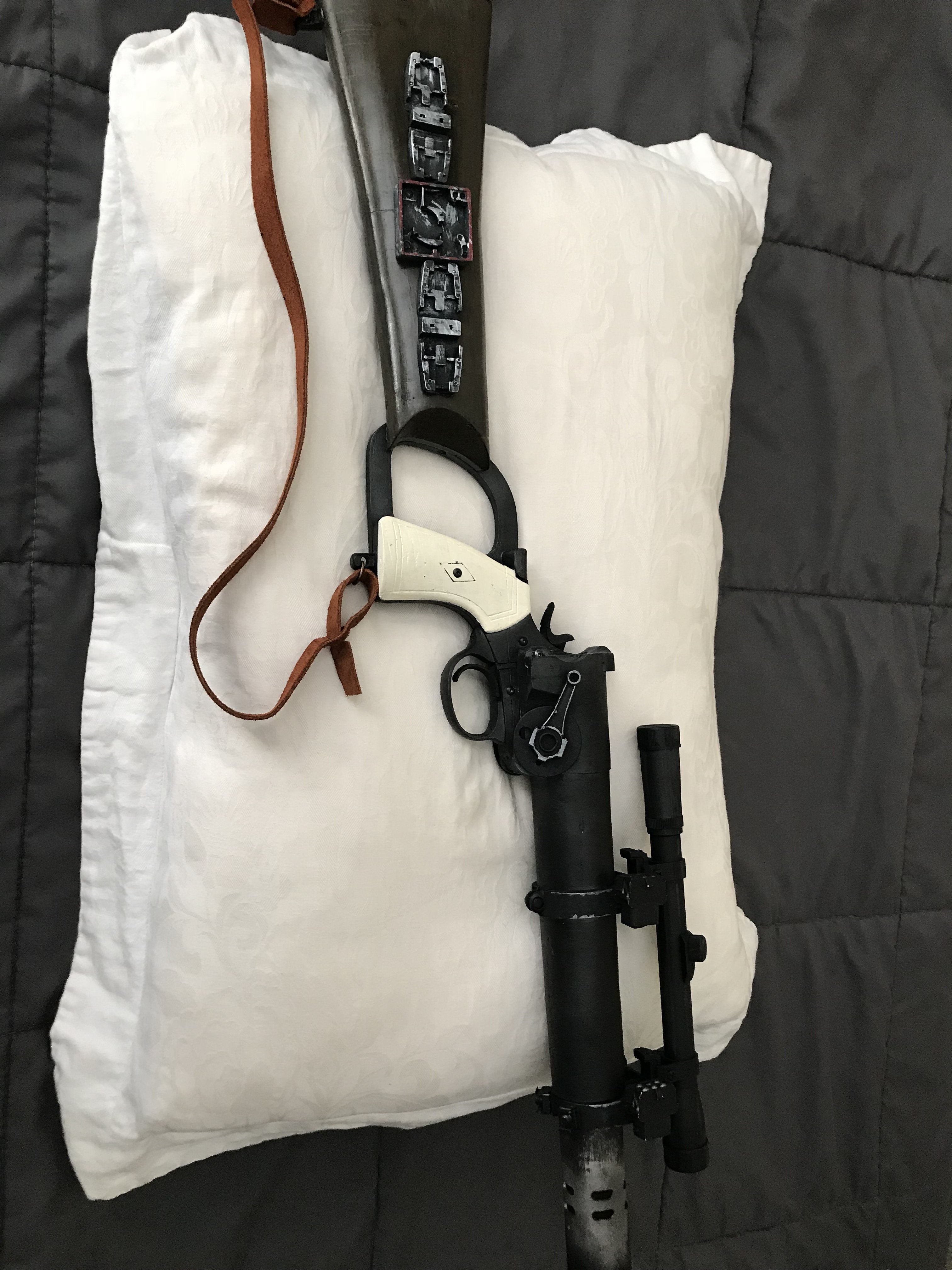 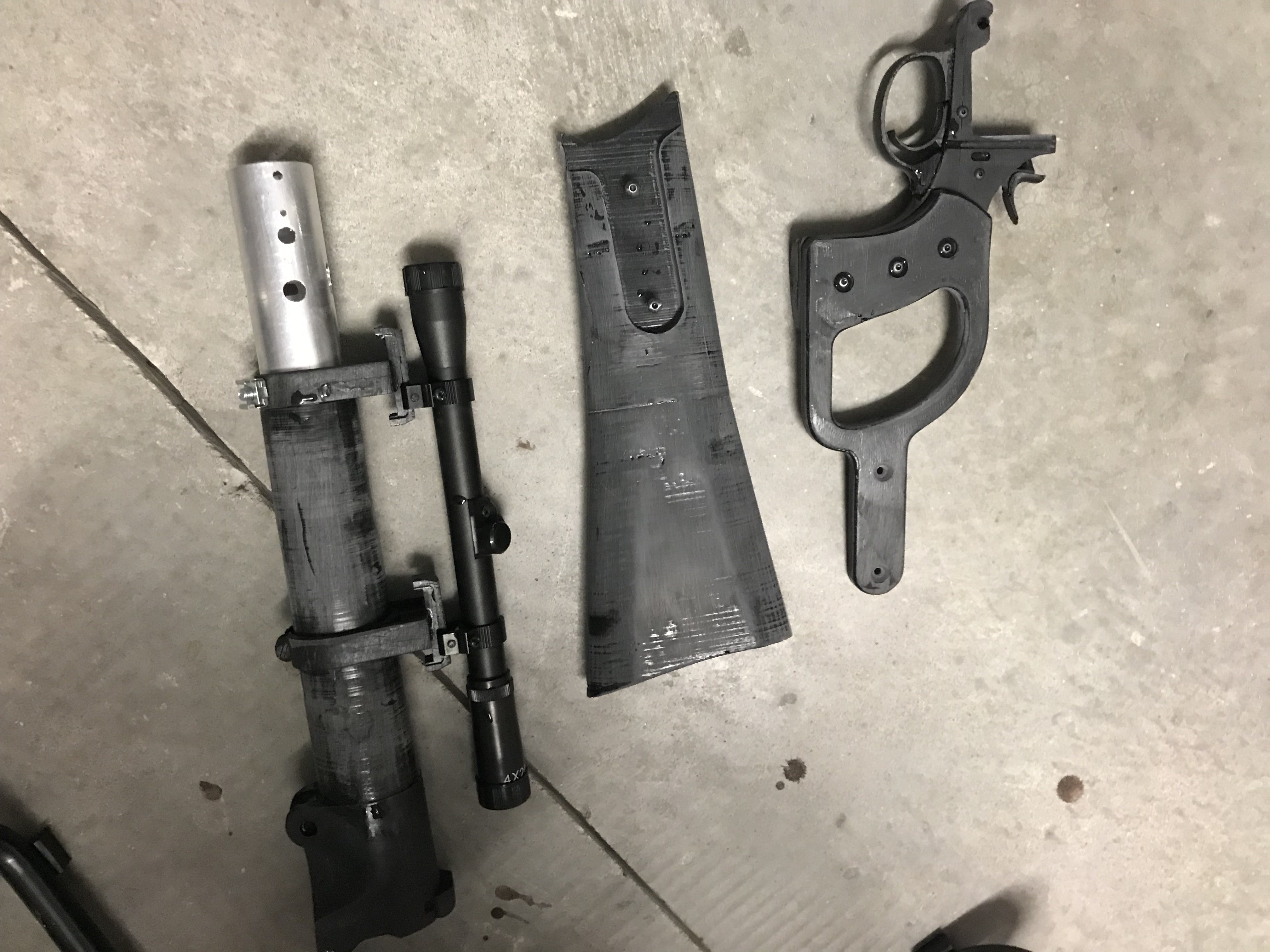 Wasted Fett Helmet , Jetpack, Gaunts, Hero Armor paid for but waiting for Lane Creative for full paint commission as he’s put me on his list.

So not much left for me to do but wait.. 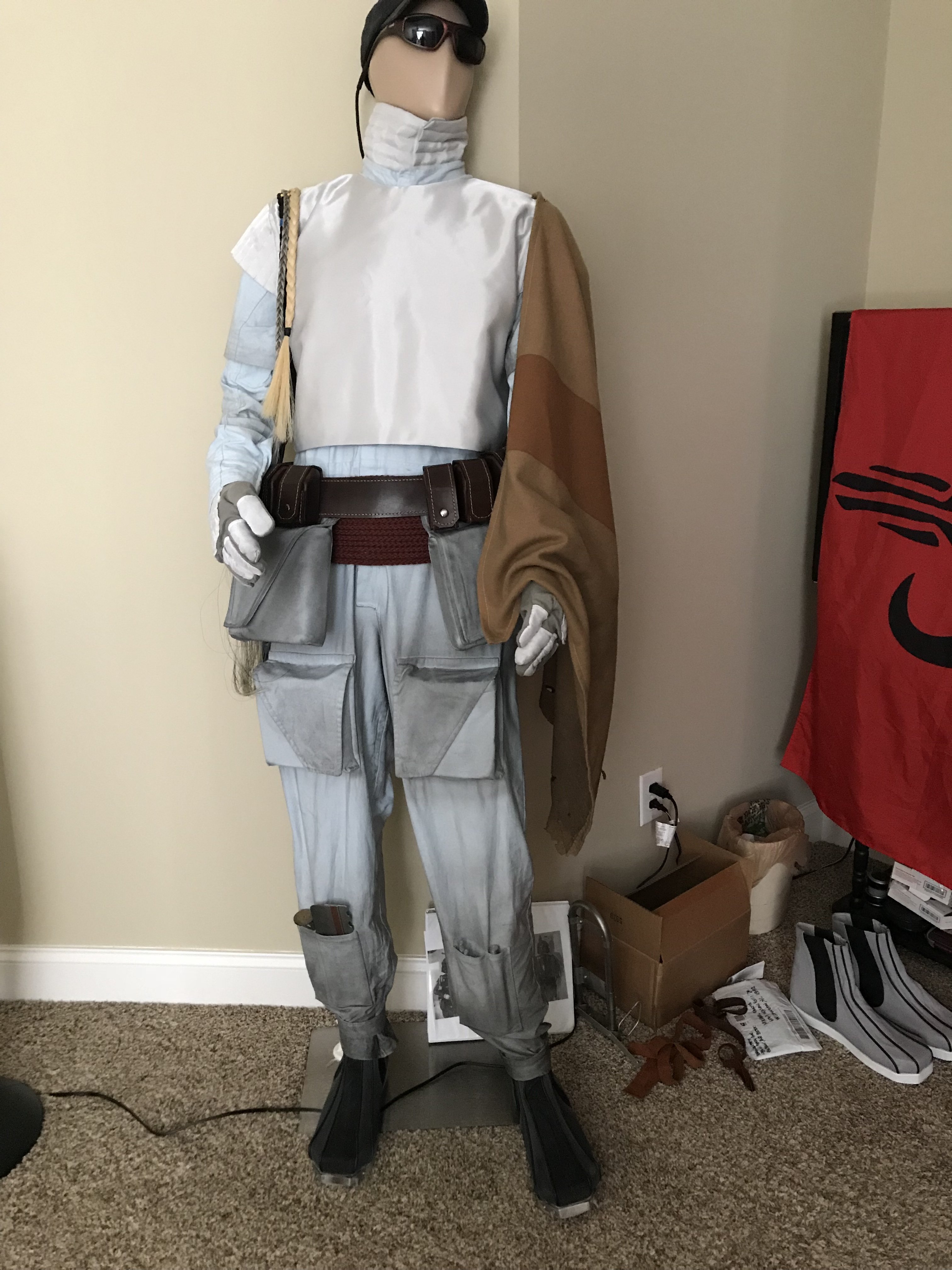 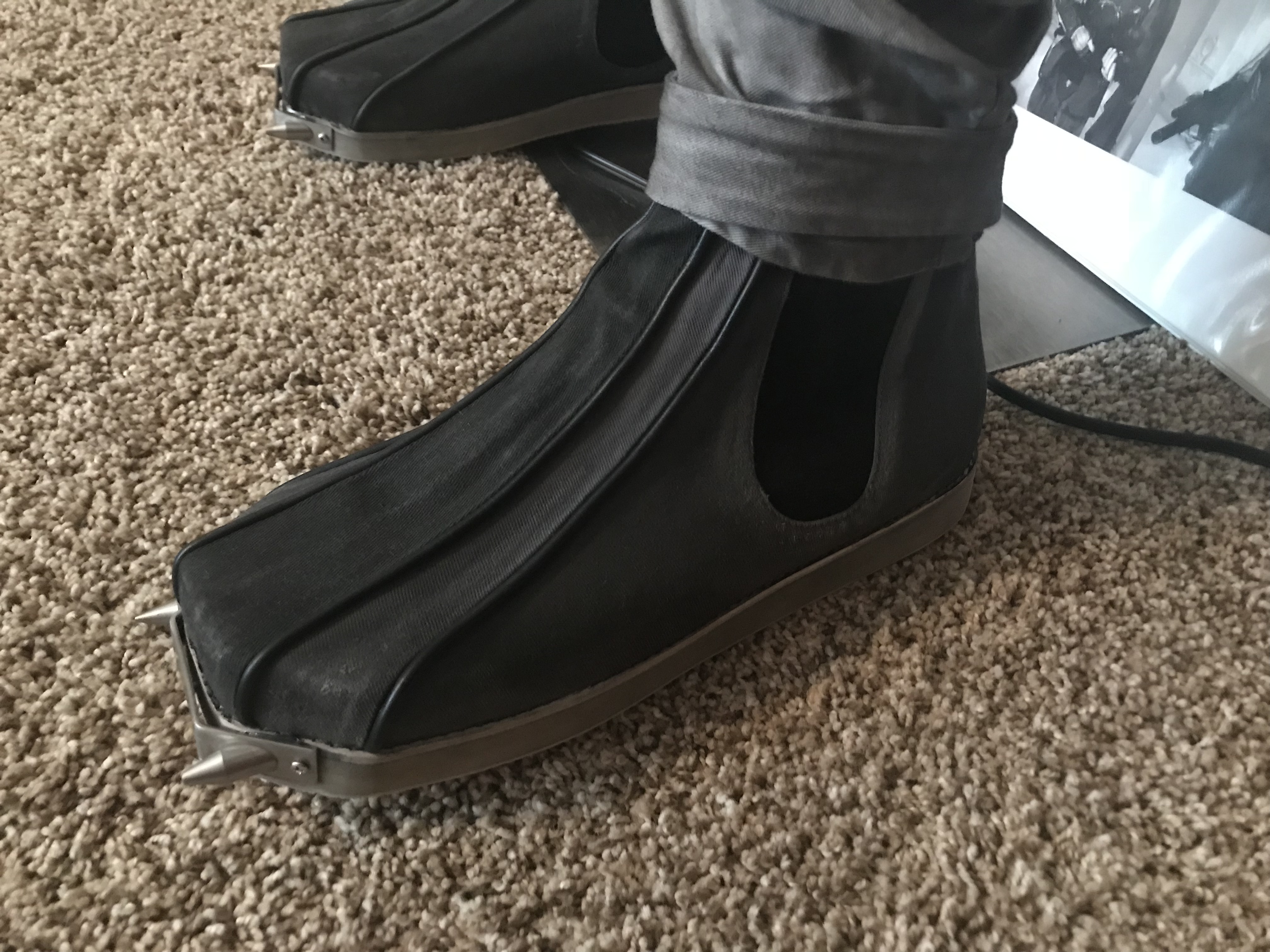 I have my ESB FPH2 Helmet from wastedfett. I am doing my own paint. I'm deep into the back panels now.

This is what I have so far
Gloves and cape from ManofWar
Paterson found parts for my shin tools. The print Squeegee and chemical mixer.
Helmet ear decals from the_real_super_jedi
Armor and jet pack decals from DeLucksDesigns

I have my ESB FPH2 Helmet from wastedfett. I am doing my own paint. I'm deep into the back panels now.

This is what I have so far
Gloves and cape from ManofWar
Paterson found parts for my shin tools. The print Squeegee and chemical mixer.
Helmet ear decals from the_real_super_jedi
Armor and jet pack decals from DeLucksDesigns
Click to expand...

Wish I had the patience and skills to do the hard parts...
Maybe one day I’ll try a second helmet and go from there...

CannonFodder347 said:
Non TDH EE3 Resin kit..
I have a TDH EE3 on back order but bought this one also...
Was kind of a mess... lots of sanding and it’s almost there. Not happy with the pistol grip color so I’ll do paint hunting.
Sling needs to be darkened a bit..
This one will be a backup.

I'll buy the back up one (3d ee3) if you decide to sell.
best of luck with your build!

JReevy said:
I'll buy the back up one (3d ee3) if you decide to sell.
best of luck with your build!
Click to expand...

Possibly down the road...
unknown when I’m getting TDH vendor EE3

Been awhile since I have posted anything.
Attached is my Sidewinder EE3 (top) with another Kit that I did myself.... the bottom one the grip color is obviously off.
The SideWinder EE3 is currently at a LightSaber guy who will add LEDs, sound card, speakers, etc.

Project was stalled with the most difficult aspect of the work... Wasted Fett Hard Parts- Helmet, JetPack, Gaunts, Armor... combined with Machine Craft FPH2 ears, jetpack parts, and gauntlet parts have been at Lane Creative in line for assembly/paint.
Possible ETA on that may be June/July.

Having serious issues with my Paint/ Assembly Commission...
Short version is he has my gear for over a year.... full kit of Wasted Fett (FPH2, Hero sized armor, gaunts, jetpack) and MachineCraft FPH2 ears and a ton of other Machine Craft parts.
First deposit was January 2019 for the helmet work....
Have yet to receive any of my stuff....

He has missed two deadlines he agreed 2 ...... July 2019 and this Halloween that I needed a few weeks in advance to prep for

Long story but it is getting ugly...
Might eventually call this guy out if I do not get my stuff done or at least back to me.
Cross my fingers and I hope it is resolved peacefully.

My ESB Fett as of last weekend.
Received the armor that is shown... (very happy with the quality) opted to use the jewelry pin/clutch pin method that is on TDH. Very easy versus what the other options were... at least for me as I am not very good at this type of work.

As far as my commission the rest is still up in the air...
Negotiated to hopefully get my Wasted FPH2 with Machine Craft Aluminum Ears by the end of November ... getting close so I will update how that goes.

I have asked for my Jetpack and my Gauntlets back with all the Machine Craft parts that go with that gear... there has been a delay with that being shipped back to me. The current Commissioner will not ship it to my new commission that agreed to take on the job.
So it will be shipped back to my house hopefully.... then I will ship it to the next guy.
That new commission guy stated that it would be 2-3 months.

If any newbies research before doing this project by reading these I urge caution- do not put all of your purchased gear to just one commissioner. I have approximately 1300-1400 $ of Wasted Fett ESB Boba Fett plus probably easy over a 1,000 $ in Machine Craft parts left at one guy's house for well over a year. Not the best decision I made... I should have sent them out a few items at a time to determine the quality along with communication and reliablity....

I am hesitant at this time to discuss the people I have been dealing with.... its a tough call at this point.

Still waiting for my Wasted Fett jetpack, Gaunts, and Machine Craft parts to be shipped ... requested them to be sent to me as soon as possible (this week)... the quicker I get my stuff back the faster I get in line with the next commission.
I got some update photos on my Wasted FPH2 and Machine Craft ears from the current commission.. The deadline for that was agreed upon to be the end of November- wish me luck!

Starting to get worried when you cannot get the bought and paid for hard parts and Machine Craft shipped back to my house ....

Really aggravating when you cannot seem to get your bought and paid for Wasted Fett items and Machine Craft items back from a commissioner ...
Jetpack and Gauntlets .. and aluminum..

Not counting the pending third deadline on the helmet that is a bought and paid for Wasted Fett FPH2 2 and the Machine Craft Aluminum Ears ..

Received the helmet yesterday.. see attached photos. I am no expert by far ... helmet overall looked great but the Machine Craft FPH2 ears and stalk just kinda initially caught my eyes as "new" looking...
I sent the images to another more senior TDH member who showed comparison photos demonstrating there are some issues.

Below will be a basic timeline of events leading up to my Wasted Fett/ Lane Creative commission.. all supported by message feed that I videoed/photographed... but it is extensive and would be a lot for this page.
**some might be approximated as it is a lot of messages to review***

February -March of 2018 -1st Message to Lane Creative after he was recommended by Wasted Fett. Basically introduction and that I want a full commission of helmet, jetpack, gauntlets, the armor of ESB Fett- also asked Wasted Fett to be put on the list for those items.

April 2018 paid Wasted Fett $1400 for the full kit.. at that time Alex is living with him so the items are supposedly just there with him. All ietms were supposedly in stock except the jetpack that he would be pulling the next week.

August 2018... I was not notified but Alex moved out of Wasted Fetts and is now back in Michigan. Alex has non of my paid for items.

(during this period or before when I am communicating with Wasted he basically blames someone else for the fact my bought and paid for items are no longer available to me at that time... states I can get a refund if I am not happy... but that basically puts me back at the beginning or now going to someone else- which I should have !!)

10/01/2018 Jetpack shipped... still no gauntlets- also this month I start shipping direct from Machine Craft an extensive list of parts for jetpack, gaunts, and the FPH2 aluminum ears when they get in stock)

October 2018- Alex stated he will be prepping my helmet soon

August 20th- says everything else ready to ship except shoulder knees and jetpack (which he now tells me was damaged?)

October 17th- deadline is going to be missed
very bad communication in the next few days
will no longer provide a deadline
I asked we communicate via telephone to resolve my concerns and he states he will not call me even though I offer for him to call me on a blocked number
Basically gets to the point to where he no longer wants to do the project and offers it up to ONLY Wasted Fett approved commissioners
He will not ship it to anyone of my choosing.
So we agree to have him ship back the Machine Craft parts, gauntlets, jetpack unfinished to me- so I can then pay this extra money to ship to someone Wasted Fett does not approve of....
We agree to have him finish the helmet as he seems to be fairly close and we agree on the end of November deadline.

I get the armor- it does meet my expectations

Nov. 15th I ask he ship back my jetpack gaunts machine craft ASAP so I can move along to the next commission

Nov. 26th he is out of town and hasn't shipped my stuff back

Nov. 27th says my helmet is done but doesn't give updated pics... just tells me to see via his social media

Dec 2nd I get the helmet and box with jetpack and Machine Craft... no gauntlets

The helmet is unfinished as he didn't weather the ears and stalk and goofed on some of the details like the decals...

Dec 3rd he advises he is sending a new gaunt kit from Vegas..

He admits to missing those details on the ears/ stalk and says I can send them back.

My hopes/purpose in posting this information is for the noobs like I was in late 2017 in early 2018 when I first started researching.
It is a warning to what you potentially are getting yourself into....

New to THIS Forum/Boba Fett Build

New to THIS Forum/Boba Fett Build