Are the colors of the CA boots accurate? I always thought there was a burgandy-ish color where they have black.

They sometimes appear burgundy when you are watching an old VHS tape of SW that has been sitting on a window sill for a while.
But all the stormtroopers look a tanish color too.

So...black or burgandy - which is accurate?

I've been doing some photo research to start my own boba and have found CAboots are about the most color accurate-they just need weathered a bit to match just right. Lookin in SW:Visual dictionary for a good reference photo-I also use some of the figures and look for which color scheme gets used most often.
Hope this helps!
S

Thanks. Interesting...all this time I thought it was a dark burgandy color. I think that's what it is on my standup.

The standard CA boot color is not completely accurate. The big problem is that they chose a black fabric for the middle stripe. On the real boots, the middle stripe was painted either black or a very dark blue on an all white base boot. The "burgandy" effect you are seeing is the dye rubbing off or fading from the fabric.

With the colors they chose, you might as well be starting with an all white boot, because the base color of the fabrics is not accurate to any version of the real boots.

To Tylerdurden you listen. I thought that the Albino Fett boots were reused after Tylerdurden told me that the boots had been painted. It makes sense

It looks like they got the original Fett boots from some used boot/shoe store or something that where already worn in really good.

CA boots just dont have that 'broke in' look to them.

Hasn't someone weathered these already? And how is the toe? it looks rounded as opposed to the more sqaure look.
Can someone who has these weathered up post some pics?
J

I just got a pair of CA Boots yesterday and I gotta say...I don't think they're all that great.

I don't care for the colour or the material. The black is all wrong and the grey material is shiny -- if this is canvas as the website states, it's not what I think of when I think canvas.

Maybe some weathering might help bring them to life, but I don't really feel like putting any work into a pair of boots that still won't be as close as I'd like when I'm done.

Aside from colour, the black stripe in the middle doesn't seem wide enough (especially near the toe), and the toe just needs to be a little more square. There's also that slight arch in the sole that bugs me.

That's just my opinion. If you have a pair and you like them, then great. But I wasn't a fan of CA Boots' stormtrooper boot or their scout trooper boot. And now I can add these to the list. They may be great boots for some, but not for what I eventually hope to accomplish with my Fett.

I'm just praying to God JW does a third run, or that someone sells a pair of his or some MC boots here in my size eventually as, from the pictures I have seen, either one is a MUCH better looking boot in my opinion.

I think their stormtrooper boots are great. The Boba boots aren't accurate out of the box but for the price and with a little weathering, I think its a great deal. Here's what TK-409 did with his: 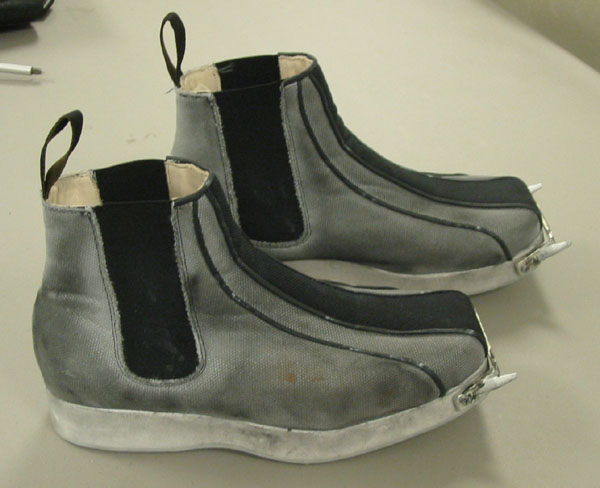 
Foxbatkllr wrote:
The Boba boots aren't accurate out of the box but for the price and with a little weathering, I think its a great deal.
Click to expand...

I'll concede that they look much improved weathered and with toe spikes. Heck, they're also pretty darned comfy. Still, for my money, I'd rather spend $150 on "close" than $100 on "close enough".

But hey! That's just me and my opinion; how other people shoe themselves is their business.

Boots Questions about making your own boots?

Boots Questions about making your own boots?