I'm just curious as to whether or not these are measuring marks undertaken by Don Post when they had it in their possession :rolleyes

Blue pen marks? I think its just blue underspray for battle effect, done that way on purpose. Now I dont know if don post had this helment but it is for certain they didnt copy any of the measurments for there helmet, so I would say they never had any movie helmet, maybe I'm wrong and they had a stunt helmet butif that is the case I dont know why the DP's are so inaccurate.

hmm.. have you also seen the "boba fett" letters on the rotj cape?? looked a little...strange.. maybe done just for exhibition...as for the pen marks, I don't think theyre battle damage... but the weathering on the magic of myth helmet is more then the one in the esb film.. maybe just from handling or somehting?? maybe someone put it together who had dirty hands

all pics are Brak's buddy's. 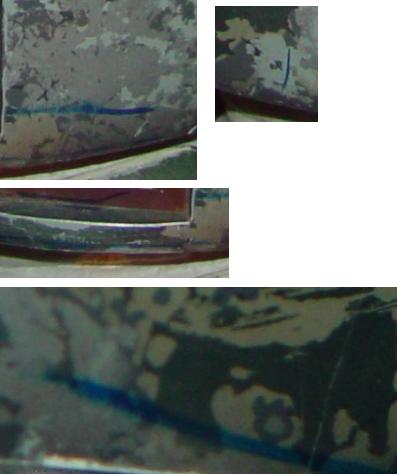 That was not on the helmet during filming. I do believe that is some sort of marker and not intentional weathering.

Anil, I'm not sure that Don Post ever had the Empire helmet at their studio. The photo with the ESB helmet on the Don Post prototype mannequin was at the archives if I am not mistaken.

Oh, and Don Post did have access to a real helmet (not the Empire helmet), including several detailed shots and measurements. That is why the Deluxe has several ILM helmet characteristics, including the dent.

ok.. so if its a marker... how on earth did it get there? did someone at ILM toke the helmet home where his 2 year old decided to show some ESB artistique liberties or somethin?

I mean its just random marker stripes, not even straight lines or anything...

TDH PREMIUM MEMBER
might of just bumped into some thing when puting it together or taking it apart. Or maybe it rubed on the JP, kind of look like the same blue. Then again im prob wrong.
G

The reason I came to that conclusion is that it actually does look like if you were to do a official replica with conditions, then it looks like a cropping of the actual size, why on Earth they would do that on the actual item is beyond me, it just felt the most logical explanation. Maybe I have had to much cherry coke

i dunno about you.. but to me it looks like someone was giving instructions to someone for cutting another helmet.. and was like "ok shorten it here *marks with blue* and here *agan* and blah blah make it fit.. blah" type of thing.. real quick marks on where/how to reshape another bucket.. just my 3 cents though. *edit* Oo I know what it is! Lil boba clone was playin with blue crayons again!

Or maybe someone thought it would be funny to place little, almost unnoticable marks on the helmet because they knew people like us would spend many hours trying to figure out how they got there and what they are for.

biomechaniod56, that is it!! :cheers

whew.. well.. now we have to wait untill someone decides to make a few pen stripes somewhere else so we have soemthing to do again... I'd vote for a red marker this time... on the gauntlets...

What is the best Boba Fett helmet maker?

How to cover the neck?

What is the best Boba Fett helmet maker?

How to cover the neck?