Gator, JFJ and everyone else that has had input, you guys are amazing. I cant wait to get my jp to start this.
Great work guys.

Thanks everyone for your support.

Oh yea. Before anyone asks, the entire pack, including the solenoid valve, piping, battery, wiring, CO2 bottle, and the Bobamaker resin rocket & thrusters all weighs in at just under 11 lbs.

I wore the pack for 3 hours on Saturday, and could hardly tell it was there.

Gator Fett said:
Thanks everyone for your support.

Oh yea. Before anyone asks, the entire pack, including the solenoid valve, piping, battery, wiring, CO2 bottle, and the Bobamaker resin rocket & thrusters all weighs in at just under 11 lbs.

I wore the pack for 3 hours on Saturday, and could hardly tell it was there.

The item on autoloc.com appears to need a heat source like a fog machine (if you read the instructions it hooks to the exhaust manifold) so it might not be a good idea for a jet pack. It sure would be cool on a car though!

WOW!
Looking forward to how to get this set up.

Here is a shot of my :moon and my :jet pack in action. The sun washes the smoke out little, but this is the best picture I could get. 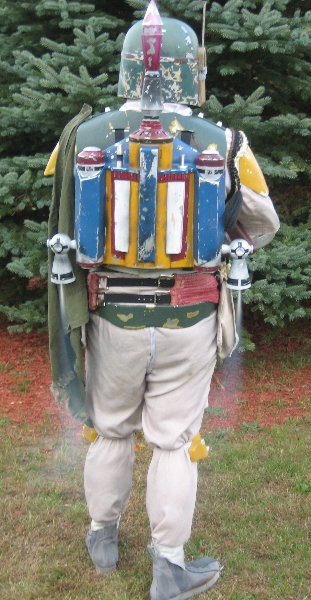 Man your Fett is tricked out!!!! RF servo, lights, and now JP action!!

looks cool, but is there a way to make it look more spread out, right now it looks like it is coming out of a small tube instead of a funnelled thruster

Zeever Fett said:
looks cool, but is there a way to make it look more spread out, right now it looks like it is coming out of a small tube instead of a funnelled thruster
Click to expand...

I have tried a couple of different things to get the smoke to look more spread out, but I could not get it to look any better than in the picture above. :facepalm The problems could lie with the gas (CO2) that I am using, or perhaps with my piping arrangement. :confused

I am open to any suggestions that people may have, but I am clean out of ideas. If anyone wants to discuss the physical properties of subcooled liquids, or the equation of state for ideal gases (remember pV=mRT?), take it somewhere else, my brain is fried.

but that jet pack must be SUPER HEAVY. You couldnt hold it much time

I see this thread is about dead from the length of time from the last post, but I was wondering how everyone who was trying any of these methods turned out with their packs. I was also wondering if anyone had thought of this. I work in the healthcare equipment supply industry and we sell medication nebulizers (little air compressor that aerosolizes liquid medications). Compressed air goes through a tube to a medication cup where you place a small amount of medication/liquid which the air blows against a cone shaped baffle breaking it up into a fine fog like mist which is then inhaled through a mouth piece. Now a battery powered version is also available for travel (great for asthmatics), which has a mini air compressor (hand held units). Most have simple internal mechanics as I've repaired and cleaned many, and can probably be modified for jet pack usage (alot of included and extra different sized and shaped tubes/tubing is included with nebulizers and can be purchased at medical equipment supply stores/healthcares). One more version that is the main one I'm getting to is also available. An ultrasonic version. It uses noiseless ultrasonic waves to aerosolize the medication for a denser mist. No compressor is used so it makes no noise and has smaller internal components. One draw back is in it's setup, the ultrasonic waves emit through a small amount of water to a small plastic cone shaped cup which is partially sumerged in the water. The waves pass through the water, through the bottom of the cup blasting the liquid medicine in the cup and aerosolizing it into a much finer, denser mist than those aerosolized with compressed air. A larger liquid supply would be needed for extended usage as most treatments only last about 10-15 minutes depending on the type of machine used, but only using about 6mL's of liquid. I have seen this ultrasonic type fogging method used elseware also. I was in The Tinderbox (Cigar store) one day about a year ago and they and they had on display in the window a decorative humidifier for sale for the home, office or even in a walk in humidor (which they had a undecorative version in the acutal walk in humidor misting away). The decorative one looked like a small fountain with a little fake bonsi tree on a small volcanic islandlike stone in the center with the mist/fog emmiting from the top and flowing down the sides similar to dry ice. larger water supply and MUCH larger product discharge. Since then I have seen similar indoor/mood type fountains in local mall stores, Lowes and a similar home/garden supply stores. Most are pretty simple and compact in parts and tubing is easly accesable through local healthcare/medical equipment supply stores, even pharmacys, and the big thing, it only discharges H2O (or what ever liquid people fill it with so there's no telling what it could be discharging late at night at company parties, lol). You could have the fogger tubbing run from the pack to an elbow joint down to the thruster cone then what ever appropriate LED's (yellow, white, red, or even blue) placed around the end of the tube where the fog/mist exits and it should produce a more "At Launch Ready" state, "Ready for Final Launch Sequence", look. Thicker, slower mist with flame trigger/pilot light (lol) lighting it up providing a wider bigger more relaxed eye show. I have yet to try this as life has gotten a little busy with the birth of my second child and my rc hobby has consumed most of my small amount of free time left but hopefully sometime before Halloween '08 I will have delved into this. Until then maybe some else can run with this or it has at least sparked some similar ideas. Or maybe it's just 3am and time to change another diaper and I'm half passing in and out of consciousness and this lamebrain idea for some reason sounds great at the moment. Or maybe I'm really asleep at the moment and just dreaming this, and it's really some contraption for an rc truck, lol, who knows, things seem a little blurry these past few weeks, lol. By the way, looks cool Gator Fett, how did you're idea ever finish out??
Last edited by a moderator: Mar 25, 2008
A

Way to beat a Dead Horse... btw re-opening a thread like this, especially this old is considered a really big taboo here...

...punctuate and use the enter key to break up what ever that rabble of words was... I didnt even bother reading it...

Sorry to sound harsh but it can give a person a really bad headache trying to figure out that....

all the threads I post in are old..look at when I joined
am surprised there is not any more updates on this

I played around with the Upside down canned air concept for a while but there were problems. First, it comes out very cold and I was concerned about the impact in the tubing. More importantly, the effect was not that impressive as the air was only visible for about 2 feet and then vanished immediately. And so my search continues.
Last edited by a moderator: Jul 24, 2017
You must log in or register to reply here.
Share:
Facebook Twitter Reddit Pinterest Tumblr WhatsApp Email Link