I have just finished this and thought i'd share the pictures i took along.
This build is based upon the two found parts identified, namely: PATERSON Print Squeegee and PATERSON Chemical Mixer. The JA Mitchell parts are replica aluminium rods from Mojo-Fett.
I haven't done the forth shin tool as it is optional and as it hasn't been sourced yet, i didn't want to bother doing something inaccurate.

1) The found parts used for the original props PATERSON Print Squeegee, et PATERSON Chemical Mixer. They aren't difficult to find on the web, hence i didn't see any reasons not to use them. 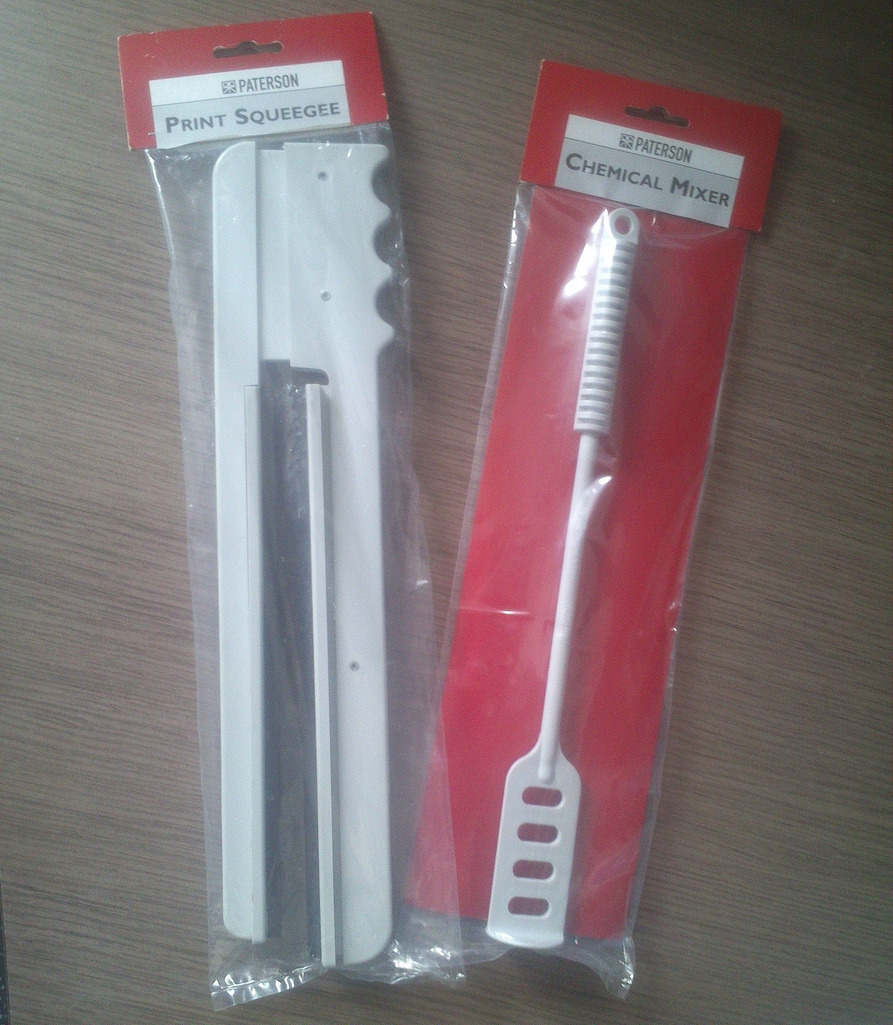 2) First shin tool:
a. Using your flightsuit and reference pics available, determine at what level you need to cut the Chemical Mixer. The third oval starting from the top should be barely visible. Once satisfied, place a mark.
b. Cut the Chemical Mixer at the mark.
c. Once fitted in its pocket.

3) Paint the Chemical Mixer entirely in metallic (no picture...).
a. Airbrush the base color, mix 1:1 of Humbrol n°93+n°154
b. c. d. Apply a wash of brown, i used acrylic for this. Then with some sandpaper (around 400 grit) and some wirewool (0000) sand away the top layer of paint up to the metallic coat underneath focusing on the ridges. 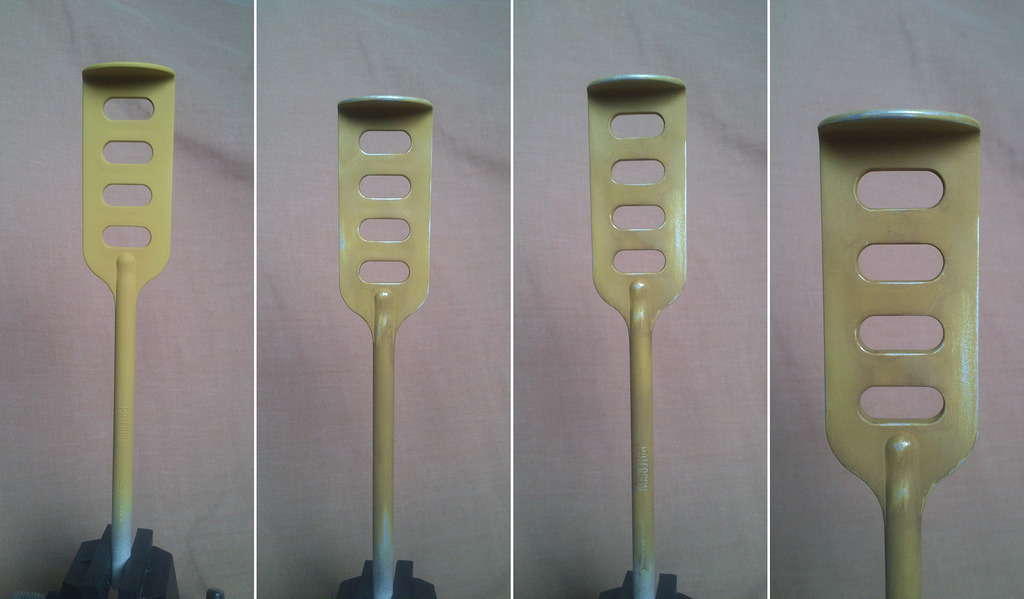 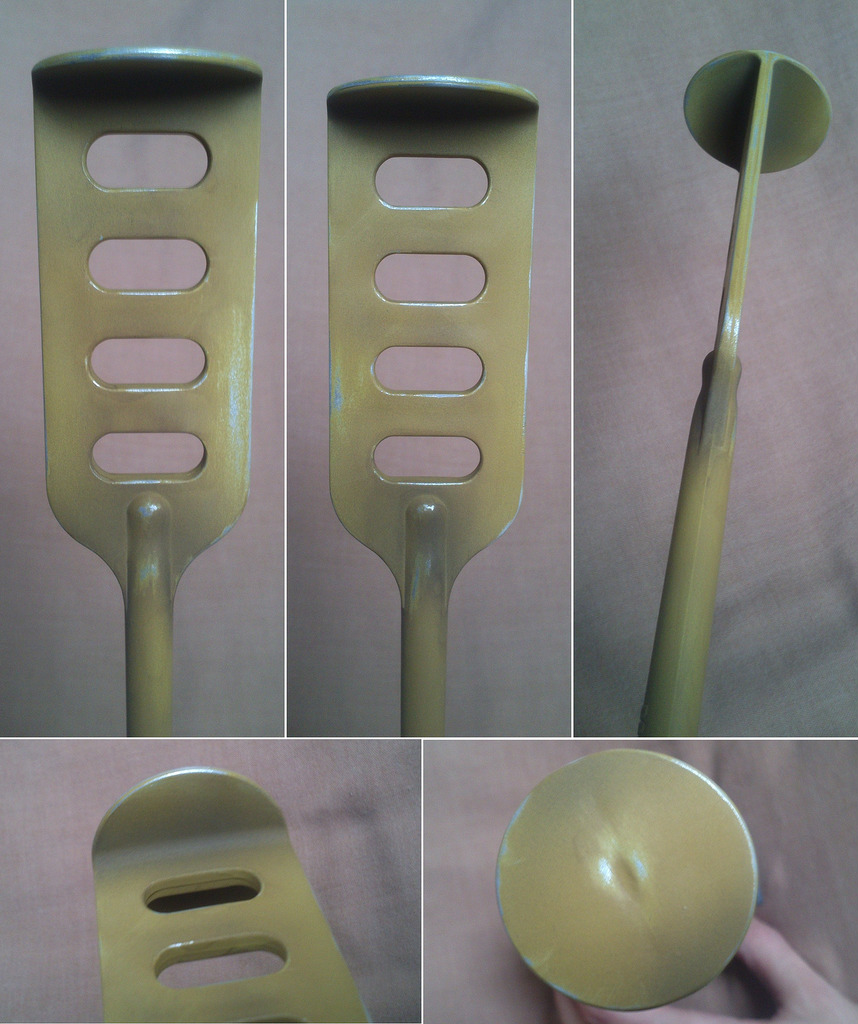 5) Second shin tool:
a. Using your flightsuit and reference pics available, determine at what level you need to cut the Print Squeegee. Only the three teeth from the top must be visible. Once satisfied, place a mark.
b. Remove the two trims from the Squeegee's arms.
c. Remove the pin from the largest Squeegee's arm. 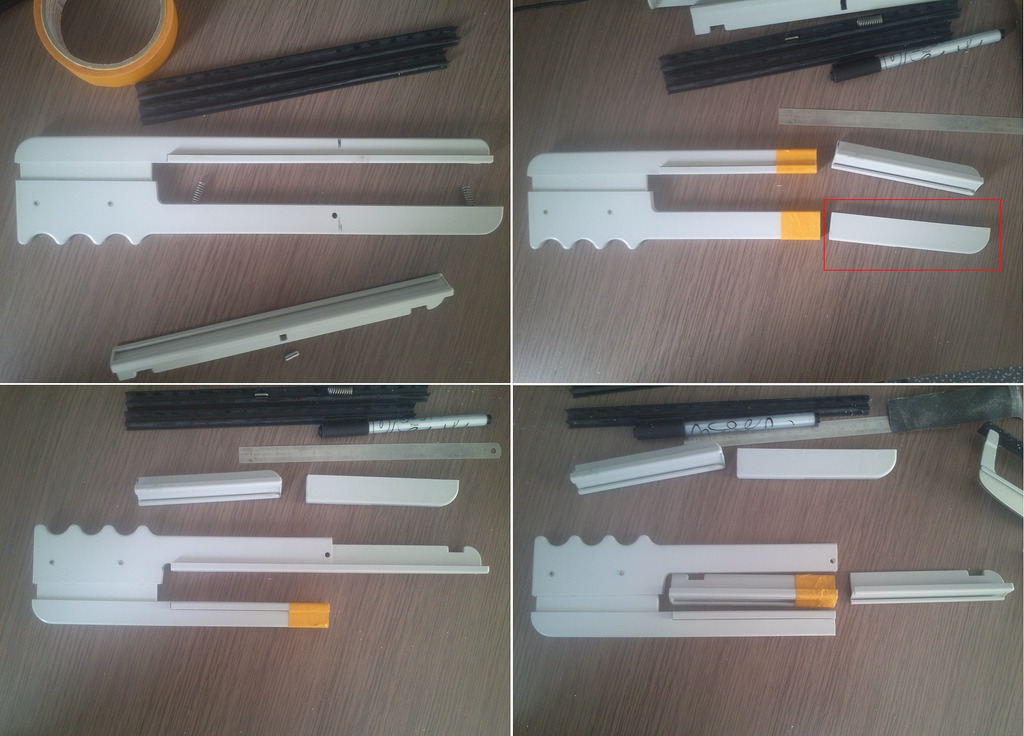 7)
a. The Squeegee's forth tooth needs to be grinded down for accuracy but also for the Squeegee to be able to fit inside its pocket.
b. Inside, there's one of the two springs present in the handle, remove it.
c. d. The forth tooth grinded down. 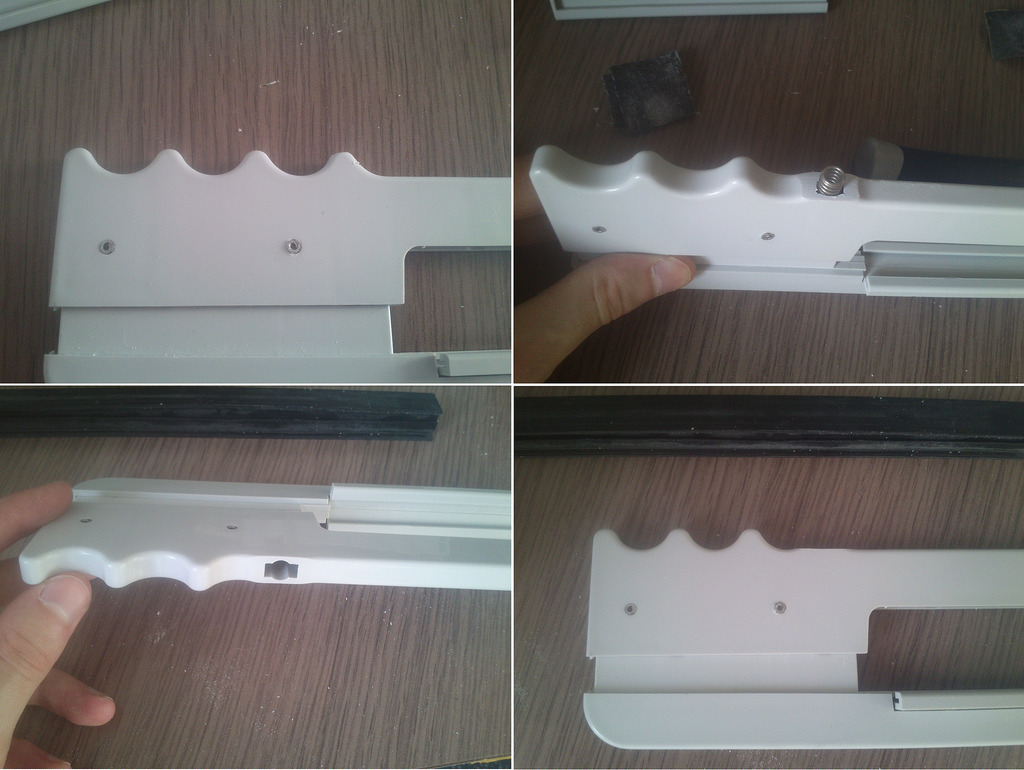 8)
a. Put back the two trims in place in the Squeegee's arms and then cut them to length.
b. c. Glue the inner arm inside the outer, then put back in place the pin.
d. The Squeegee in its pocket. 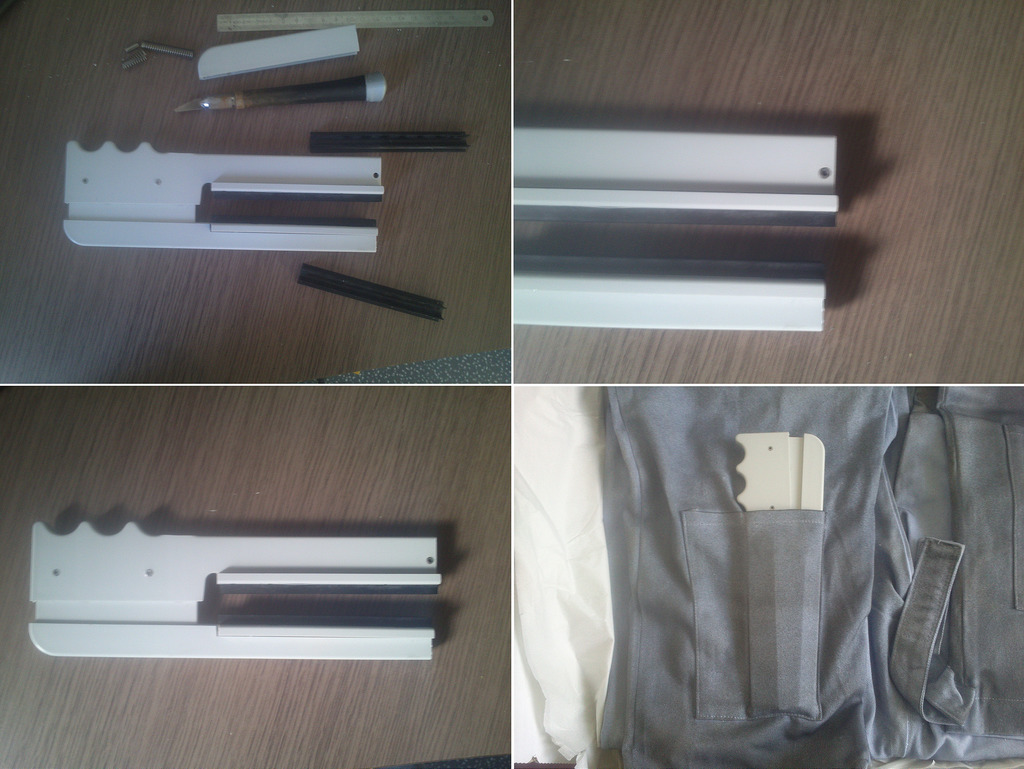 10)
a. b. c. d. Use Maskol to mask the damage and tape to mask the sides. Then, with the airbrush, weather the Squeegee with successively a layer of Grey n°106 (almost an uniform coat) , then Black n°33. I didn't mask the orange strip during this step so i could grim it at the same time. I the grimming is too heavy, you can buff back the orange with wirewool 0000. 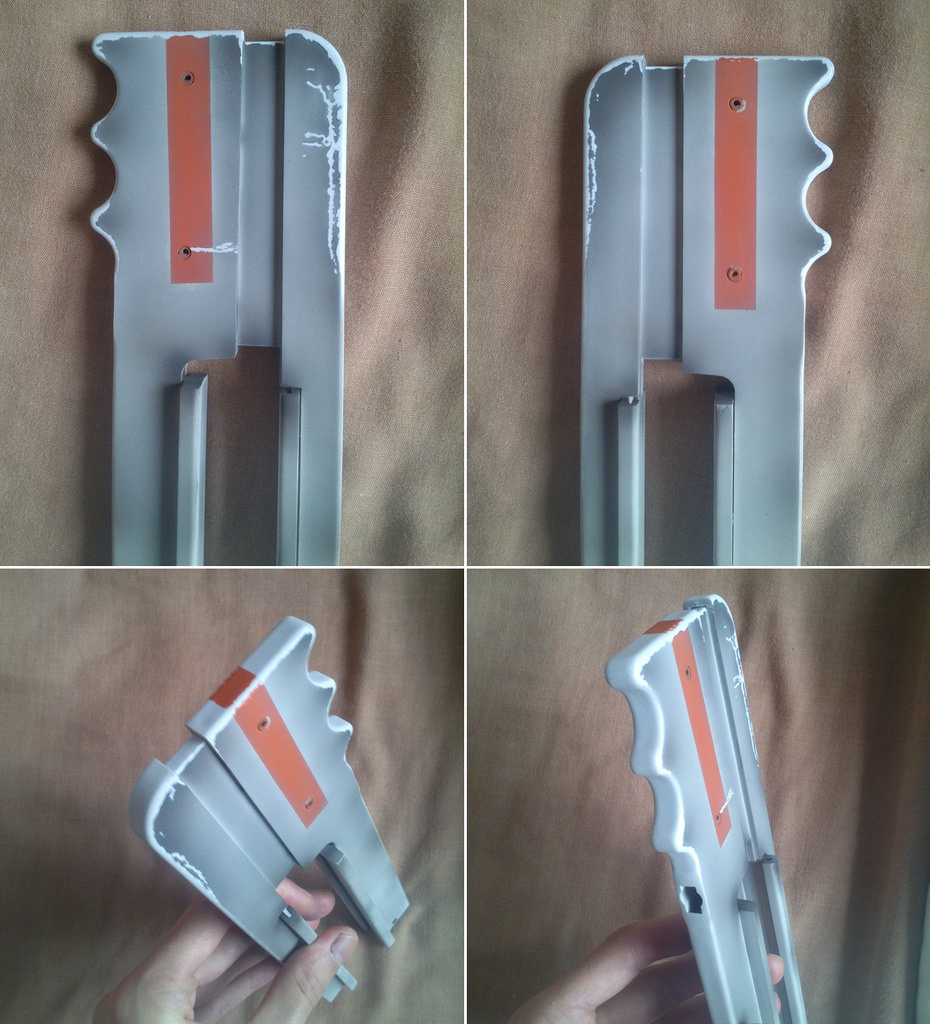 11)
a. Make a cardboard for the black pieces of tape.
b. Report the cardboard on black tape and cut it out with a x-acto.
c. d. The pieces of tape once set in position. At this time, i have also added few slight scratches on the Squeegee with sandpaper. 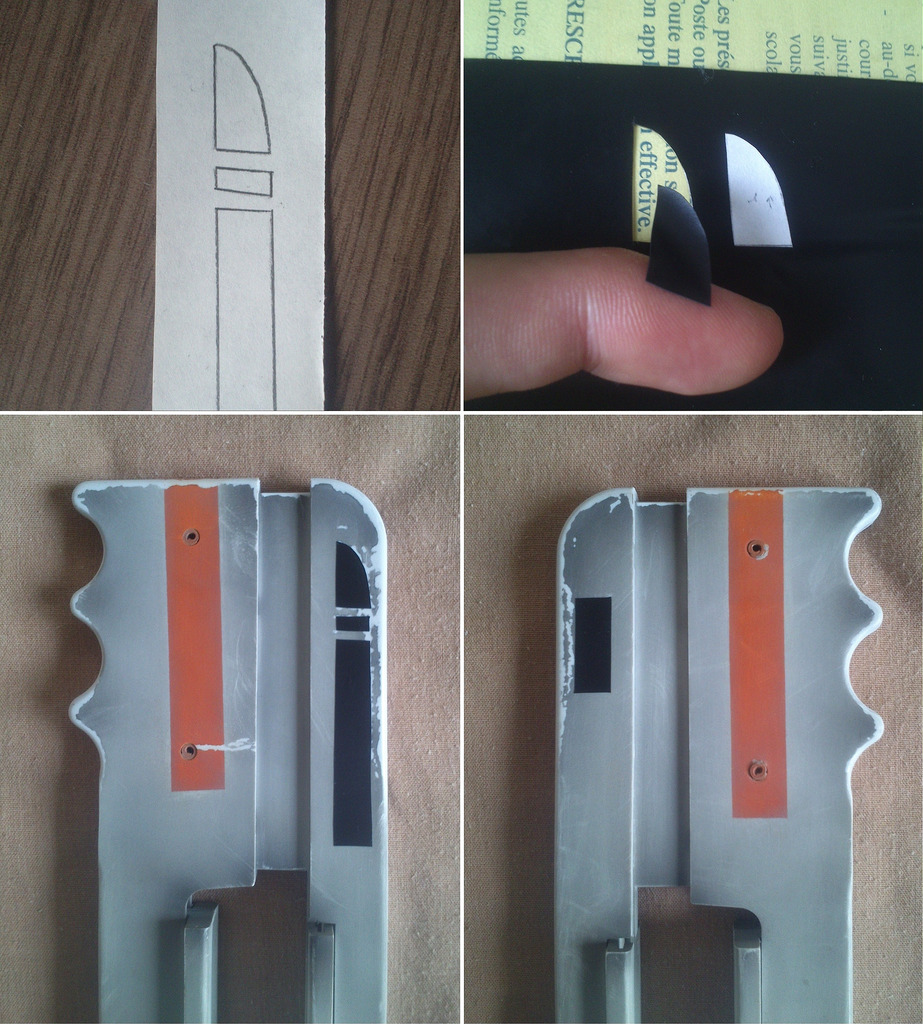 12) Third shin tool:
a. Align then shift the aluminium rods and pass a M5 screw through them.
b. I have kept the excess from the screw purposely as its lenght was helping me to position the rods .
c. Cut a piece of ABS at the following dimensions: Width = 60mm (just make sure it fits inside your flightsuit's pocket), Height = 86mm, Thickness = 5mm. As it happens, mine is a patchwork of four different scraps of ABS... Don't forget to round off the two bottom corners.
d. The third shin tool before painting. The grey part in which the ABS piece fits into being the Squeegee's part i previously framed in red. 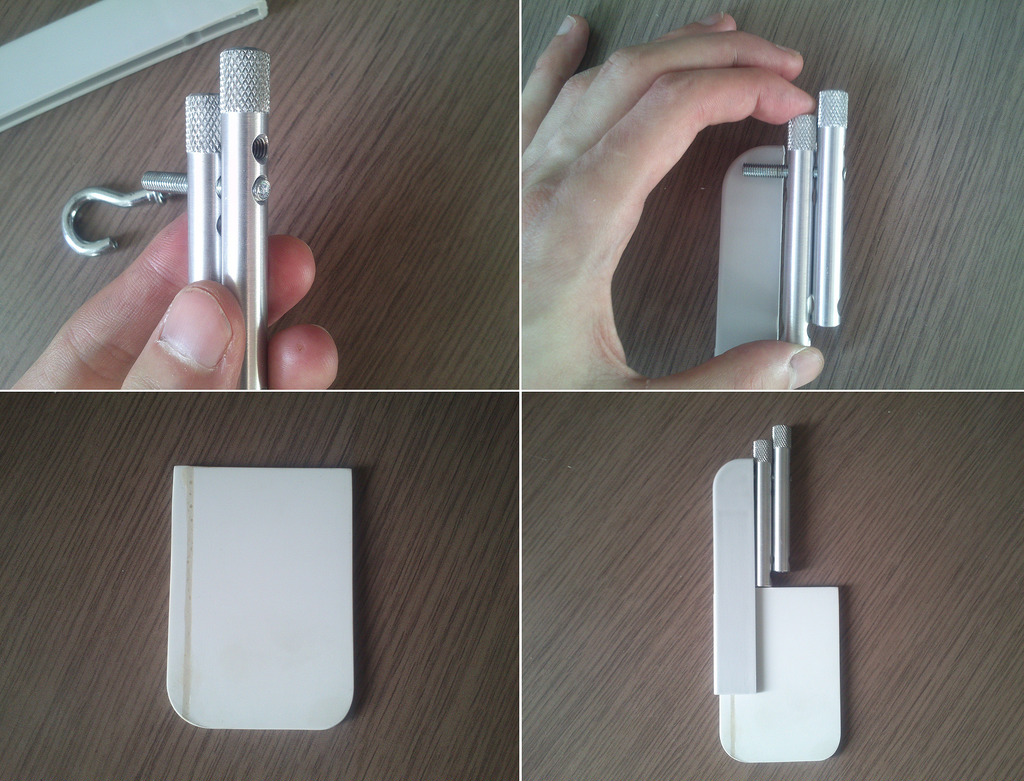 13)
a. Paint in black the ABS piece.
b. Use some sliver paint to weather it (when i think about it, i should have painted it metallic, then in black and weather it with sandpaper).

15)
a. b. Wheather the aluminium rods with back n°33, and then acrylic Burnt Umber. 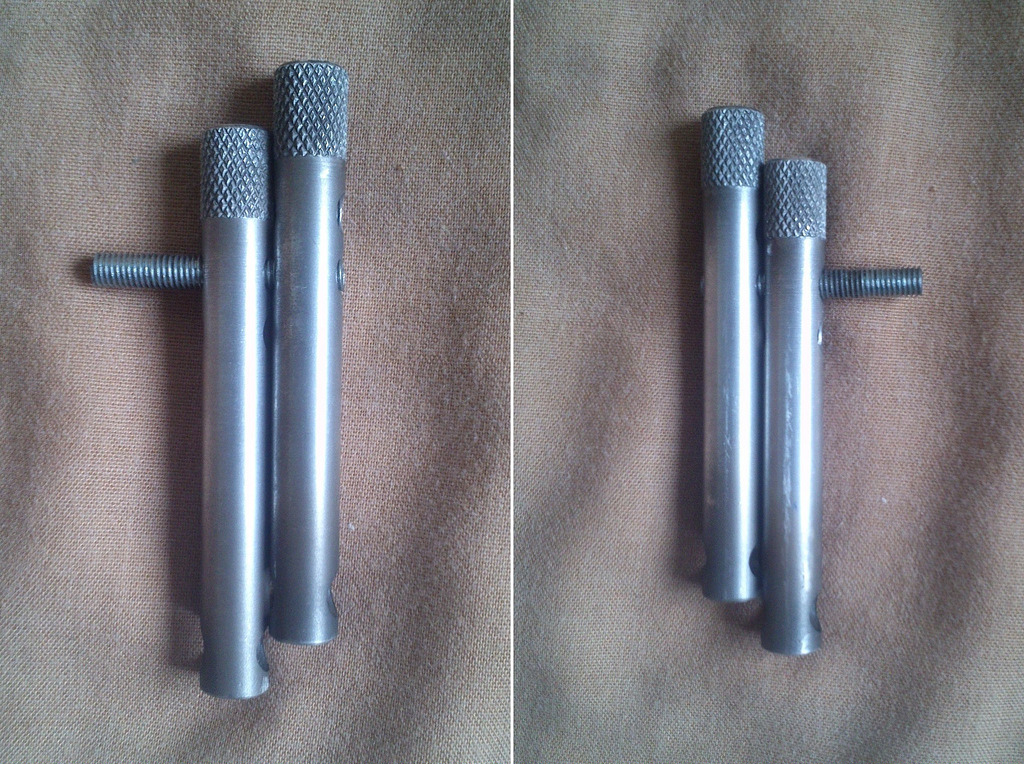 16)
a. b. c. Slight additionnal weathering with sandpaper. 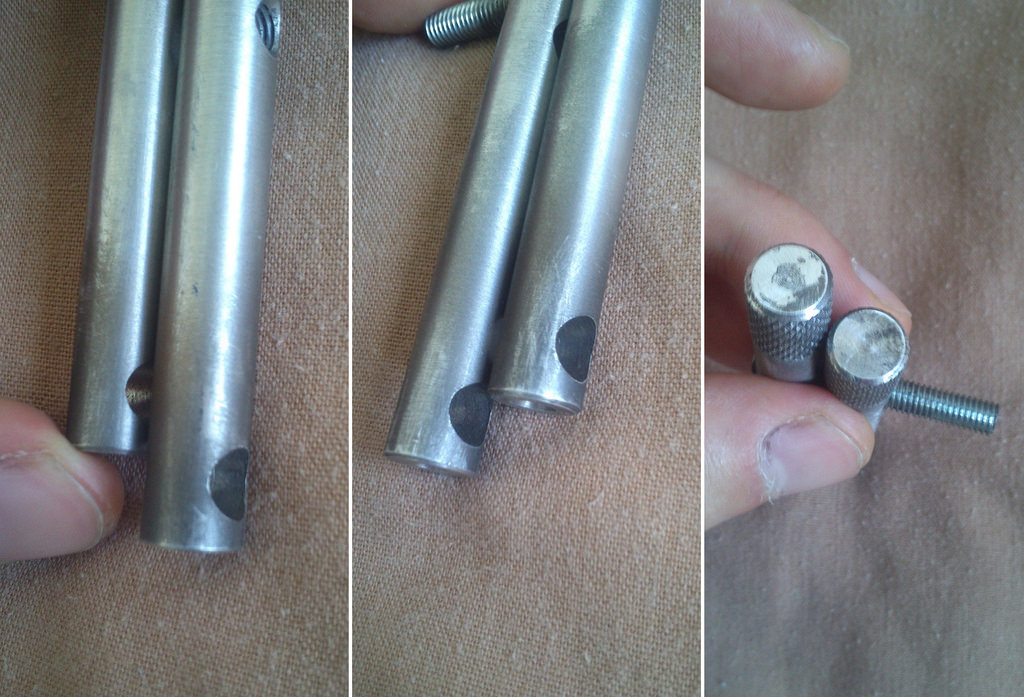 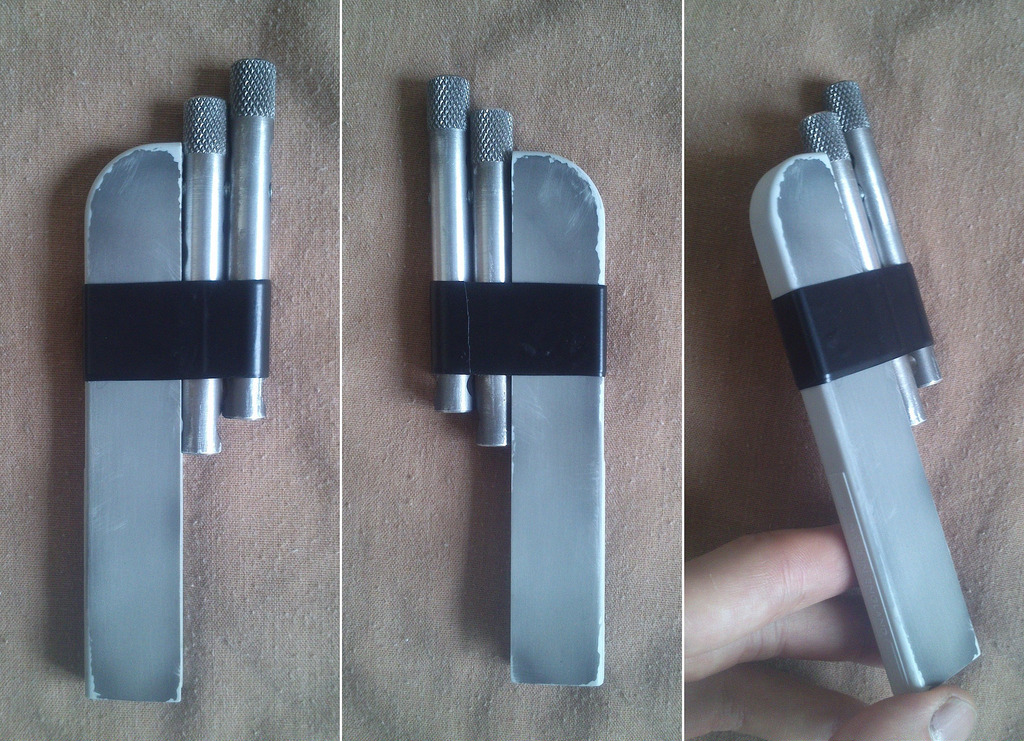 18)
a. b. c. Additionnal weathering with rust colored pigments. 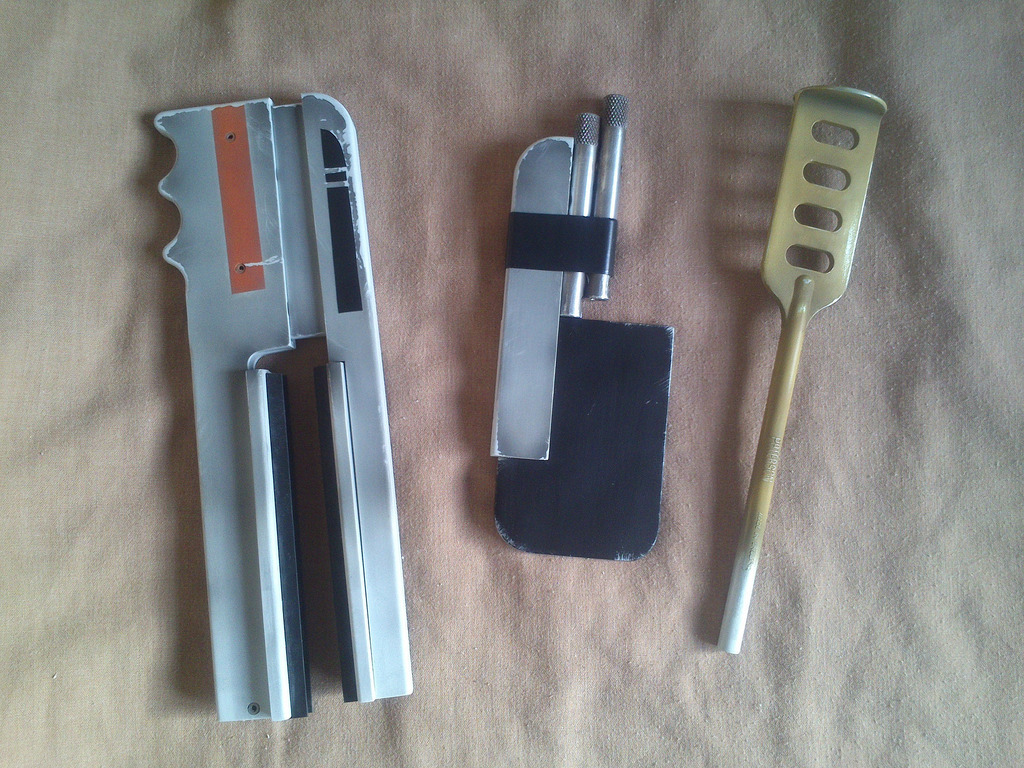 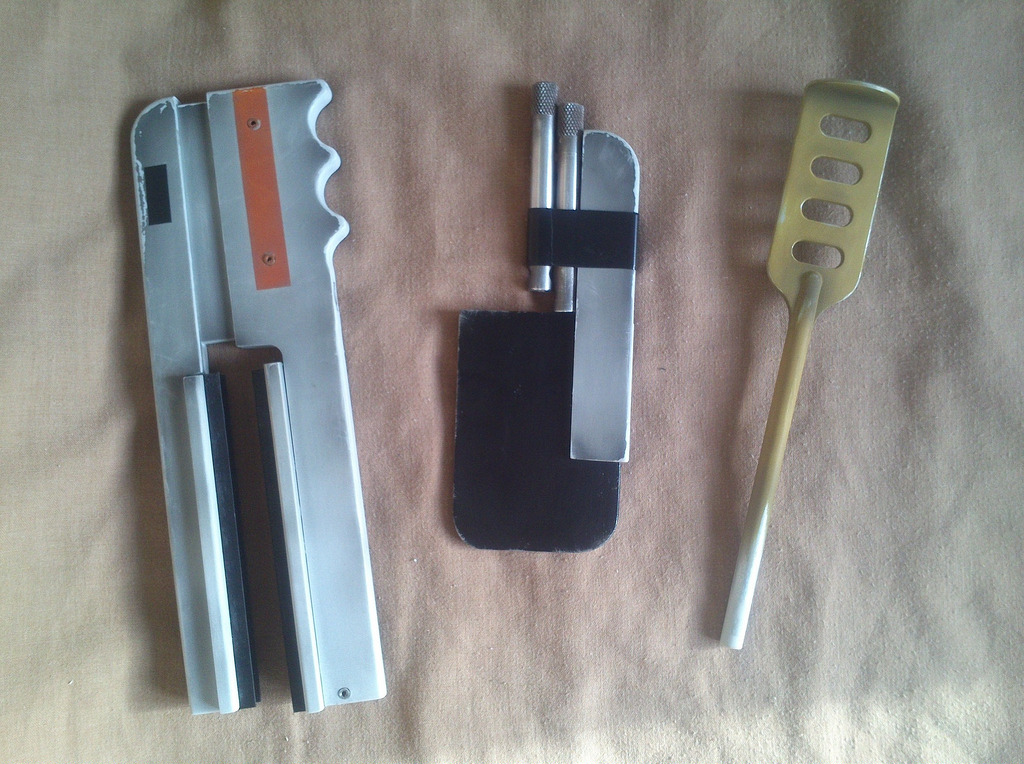 Thanks for the thread, I'm about to start my shin tools so this really helps

Preferred Vendor
Those look great! Nice job! PS: the rubber strips arent supposed to be put back in the squeege..technically...but they are hidden and it looks kinda cool ..just thought id mention that Again, nice job, the weathering is super!

Great job! They look awesome, I may need to re-do mine after this post!

Thank you all! This was fun to do, even though it took longer me than expected.


Darth Voorhees said:
PS: the rubber strips arent supposed to be put back in the squeege..technically...but they are hidden and it looks kinda cool ..just thought id mention that Again, nice job, the weathering is super!
Click to expand...

Didn't know that. I saw that Rafalfett left them on his diagrams so i thought i'd put them back on. Anyway, as you say they're hidden and very easy to remove if needed .
Last edited by a moderator: Apr 8, 2015

The5thHorseman said:
Didn't know that. I saw that Rafalfett left them on his diagrams so i thought i'd put them back on. Anyway, as you say they're hidden and very easy to remove if needed .
Click to expand...

There's no evidence regarding the rubber strips, so it's up to you if you leave it or remove it.

You did a great job with the shin tools! For the 4th shin tool you can use an aluminum/steel tube as a replacement (for ESB the measurements from the lower part), as this is the closest thing to the real one (whatever was used):

Thanks Raf. About the forth tool, i'll keep that in mind if ever i come across a steel tube.

Thank you all for the praises!

Definitely bookmarking this thread for when my Paterson tools come in! Thank you!

Perfect!...I'll be using this tutorial this weekend. Thanks

Damn.. this is a great tutorial on the shin tools, great step by step

Such a great thread ,amazing work !

Vest What to use for the non armor parts (clothing) for Boba Fett cosplay?