Last weekend I finally set out to make my own flightsuit after using an altered pair of Dickies for the last year and a half. The Dickies were fine for the beginning stages of my Jango suit, but the inaccuracy in color became more and more bothersome as my suit progressed and became more complete. As suggested by MiraX and others I used a Green Pepper Black Butte Jumpsuit pattern and altered as necessary to replicate the Jango flightsuit details.

The fabric is a medium weight 100% cottom brushed linen purchased within the labyrinth of the garmet district in downtown L.A. during my last trip to the FIDM exhibit in September.

The first pic was taken outside in the sun for a color comparison from left to right between my old Dickies navy coveralls, the fabric I bought, and a Red Kapp postal blue coveralls I still have in the box in the garage and can't return cause it's too late.

It took me the better part of two weekends to complete this project (including this 3 day weekend which my wife wasn't too thrilled about) and I still have to reinforce the leg armor areas with iron on patches on the inside of the suit, and sew the button holes for the armor elastic straps. I also need to add elastic strapping between the two sleeves for the gauntlet hose clips, and seal the exposed seams on the inside of the flightsuit to further prevent fraying.

I like the medium blue flightsuit color portrayed in the pictures in the Dressing the Galaxy book so I'm going to keep the color as it is for now.

Enjoy and know that if I had no tailoring skills or very minimal skills this project would be best left to the pro flightsuit makers like Bobamaker and Skygunbro. I have the utmost respect for their flightsuit making skills after venturing this project.

Oh, and the zipper running up the front is a parka zipper that unzips from both ends for those restroom emergencies (#1 only though) . 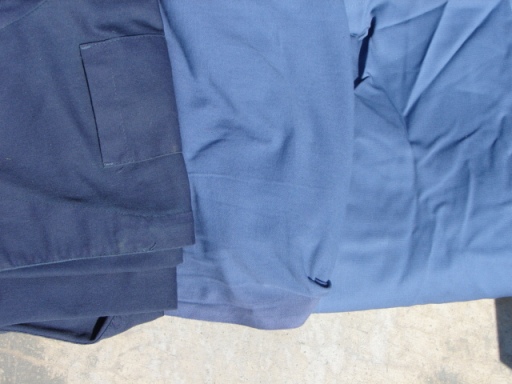 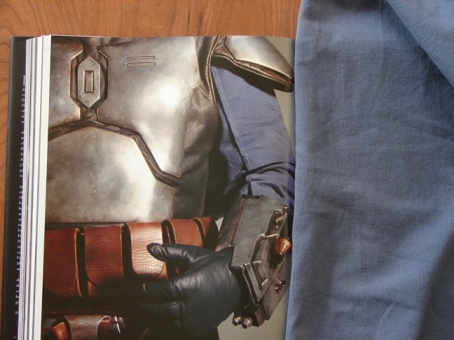 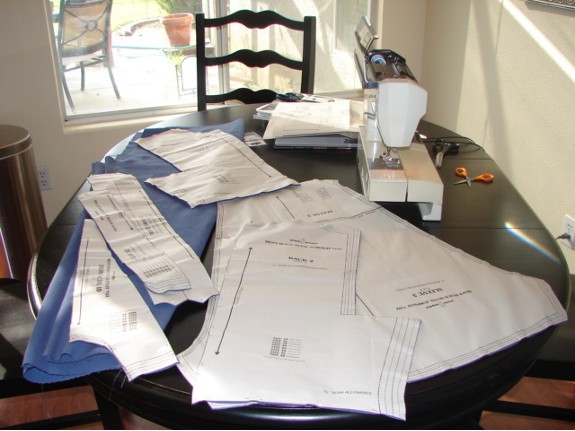 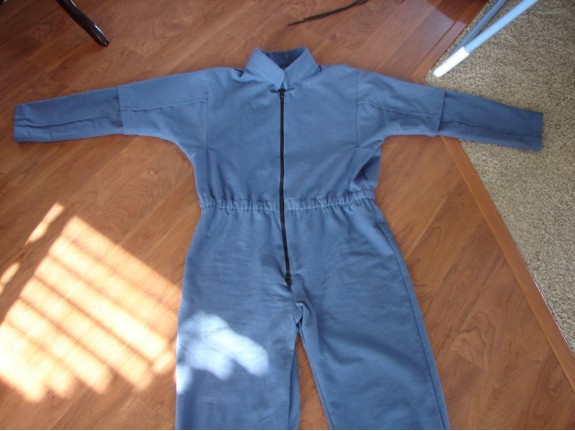 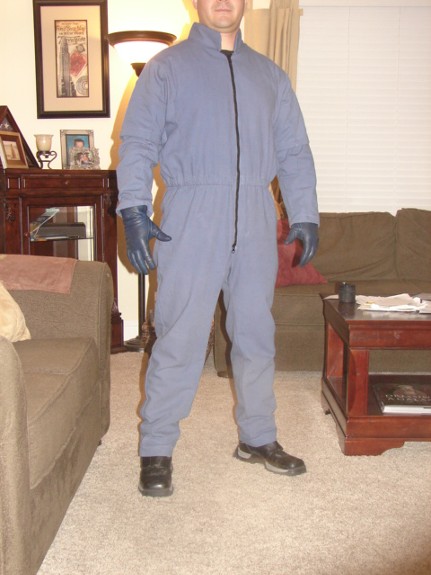 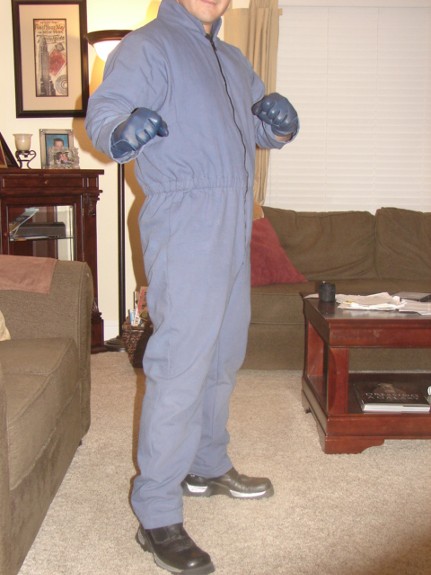 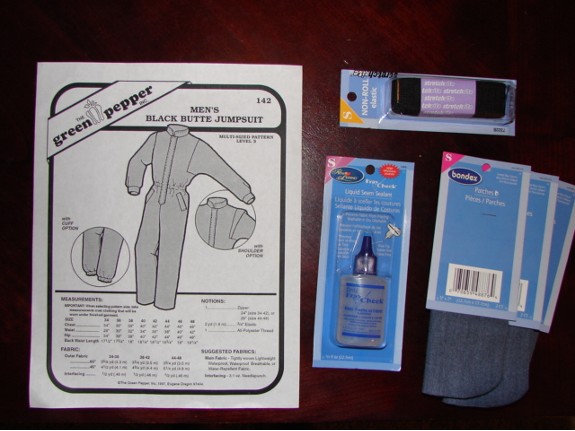 you look like the same build as jango so your suit should look real good when done.

Very nice! :cheers Now i know what i need to look for;-)
-Goldenrod

I need to take up some sewing classes.

Thanks guys I'm glad you like it. It was a worthwhile project now that it's over, but if I had to do it over again, I would think twice about just purchasing one from one of our pros here on TDH, especially considering the amount of my personnal time taken up by this project. But then again it's a totally custom fit and I have the bragging rights of making it.

Thanks Sean Solo for the "as alway" peep. I like to post my stuff because numerous posts from fellow TDHers have helped me and I hope to do the same for others.

Anytime Goldenrod, glad I can help. When you're ready to start cutting out patterns, let me know and I can detail the tweaks I made to the patterns to get details such as the pleated double sleeves. F.Y.I. I used approximately 4.5 yards of 60" wide fabric, and I even messed up on the outer sleeves and had to recut them.

And Fettster, yeah when I first joined about a year and a half ago, SEEKER informed me that Temuera was around 5'7" and I'm just an inch under that at a stocky 175 lbs., so I like the fact that I'm about the same height and body type.

No sewing classes SEEKER...all the thanks goes to good ol' mom who taught me how to sew when I was just a wee little lad. But with your creatively mad skills you could probably read the instruction manual that comes with the sewing maching and begin whipping these out in half the time it took me. You'd be surprised at how easy to understand and guided the pattern instructions are for all patterns.

Looks great Cruzer. The color looks spot on with the pics from the book.

I like how you got that seam down the arms just like in the photo on yours...it looks spot on!! Really good. You'll a genius with the sewing machine! That looks professonally done to me!

Thanks guys, and believe it or not Gonzo that freak'in pleat (freak'in because it was a pain in the neck to plan for) on the sleeves is repeated in the back of both sleeves as well. I didn't catch that detail until later when I was looking once again at the pics on that Jango on the Runway thread so see how much excess short sleeve the original flightsuit had with the hoses tucked underneath it. And WHALA, there it was on the back too. So while the front pleats are actually sewn into the shoulder hem, the back pleats were created after the fact by gathering up fabric and folding it over. Not screen accurate but they get the job done just as well, plus no one's going to be looking at the back of your sleeve when trooping. I wonder if the Boba flightsuit has the quadruple pleat detail?
Cruzer
G

thanks Cruzer! i will definitely take you up on that help once i find the right fabric.
BTW you've got a PM!
-Goldenrod

...dang bro!!!...I think I am going to have to suspend my Jango project...cant compete w/ya

That turned out great and the color looks very good too!

Thanks slavefive, but bro don't even go there cause you couldn't suspend that project if you tried. You've got the bug for a Jango suit now that your custom is dialed in and no medicine can cure that. Just don't go showing me up. Yeah right, I know your Jango is going to freakin rock. I'm the one who can't compete...unless of course you keep making those ridiculously thick armor pieces you keep posting pics of!

And thanks Mirax, actually I owe you because your pics on your website served as my the first inspiration to this project and it was your site that gave me the source for the best pattern out there. So thanks!

Whoever's going to FIDM this weekend, I can show you were I got this fabric in the Garment District about 6 or 7 blocks from the exhibit.

...dunno...appreciate the props but you have been showing some serious skillz for props...so from one soon to be Jango to another Jango :cheers cheers!!!

Actually I'm glad that you mentioned that...cause the truth is I know that your future chest armor casts are going to be crazy sick in a great way, so put me down for some for a custome mando suit if you ever start pumping it out on the Fett market.

As always bro your ingenuity is awe inspiring.

I can wait to see the updates in person this weekend! :cheers
Last edited by a moderator: Jul 25, 2017

Current State of Cruzer and his molds
2

Current State of Cruzer and his molds
2