I have decided to try my hand at painting a helmet so will use my spare fg (which I was not overly keen on) so it won't matter if I mess things up.

I've only ever painted pvc armour and did not do a very good job so my skills are basically zilch. I plan on using rub 'n buff which I think is straight forward enough but I want a slight Boba look to it as far as silver appearing underneath the blue goes. After doing some rubbing down I liked the effect it gave so will go the liquid mask route. Hope that makes sense.

The problem I'm having is getting rid of the pin stripes. Should I just keep sanding them or get a knife and pick it off?
After it's completed would laquer/clear coat be used on the rub 'n buff?

Thanks in advance guys. 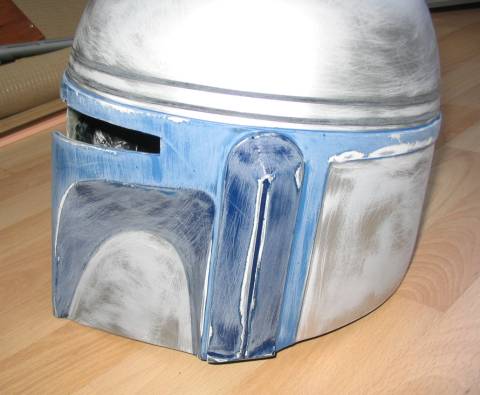 OK the pinstripes sorted but any report for the laquer on the r'n'b would be great.

What bucket are you doing this too?... old Rubies?

Fellow Swansean who done the Jango bucket before....

From what I can gather it was fashioned from an old Don Post Boba.
A JD bucket will be my pride and joy soon so it's about time I started to learn some of these painting techniques.

Humbrol on various kinds of paint

Is removing Maskol a must between layers?

Humbrol on various kinds of paint

Is removing Maskol a must between layers?