Well folks, I just arrived back to my hotel from the MR members party here in LA:cheers On display were many of the new helmets due to arrive at some point this year...including the Fett helmet. I had the good fortune to check out the Fett first hand, here are some observations...the helmet has a wonderful heaft to it and is well padded, however the light was poor so sadly I cannot comment on the overall color of the helmet. The RF does have working lights when positioned at three o'clock and turn off in the up right position. My number one concern was the size of the helmet...well that is until I put the bucket on. Yes folks, I had the balls to remove it from its stand and try it on my own mellon A little back story...several months back I was at a event with Jangos Kid who has a MSH2 and oddly I was not able to get the helmet on (all the way). I am happy to report that it was NO problem for me to get the MR helmet all the way on...AND IT FELT GREAT!! My nose was'nt smashed into the visior either. Beleive me when I say that if I can wear this helmet, any one can wear it. Just a side note...the same it true for the Trooper hemet

So, would that be saying if you're shorter and have a smaller head it'll be too big?

What kind of liner they put in it?
A

and do u know how much they r goin to sell it ?

That was one of my main doubts... if it would have the correct funtional leds or not... and based on what you say... it willl have them Now, I'm happy

Yeah the helmet is not a big bucket like it has been altered into and unsuspecting fans have been made to believe what is screen accurate in size. Sorry I have preached this before but be careful what you believe is the truth. I have never seen a factory helmet and to be honest all of the fighting I had to do with LFL to get some details on it was tough and with that in mind I doubt they even knew there was a chinstrap. Not sure how if they got the paintjob right I guess they didn't want me calling out corrections. I had to send the paint colors twice to the factory for some reason it was tough to color match.

I guess that I should mention that I am 6' and 170 lbs...with a slight build. There was no mirror on site for me to stand in front of so that I could check out the proportions as far as my body type to helmet. I did not have the MSH2 to compare them side by side, no worries about swimming inside the helmet. IMO, the MR helmet did not appear to me to be too big. No chin strap and the padding is the same as with the Clone helmets. That is about all I can report on as my memory is fadding...no photos:facepalm

Hey I just did some snooping around on the MR website, I found this shot of Boba fetts helmet (scaled down version) IMO I think it sucks noodles, hopefully the full size looks better.
:cheers
R

The scaled down one is not exactly my cup of tea and I have no idea where they drew the colors from.

isn't the .45 scale a copy of the Riddell minature helmet?
R

YEah they bought the license from Riddel
G

Master Replicas should start making kits, Most of their factory painted stuff is terrible.
R

I don't know their Falcon was pretty decent but a few were kind of bad.

Community Staff
The MR Fett helmet is size-wise very close to the Mystery Helmet and RS' PP2 plug. RS' resin ears fit the MR helmet perfectly. Of course it SHOULD be the same size since it is a realscan of one of the original helmets. A few areas have been reworked slightly and like RS, I have not seen one of the mass produced buckets, but overall it seems to be a VERY nice helmet and I think for costumers, it will be outstanding. The countouring of the bottom edge is a bit odd, but that may change a bit from helmet to helmet and from prototype to mass produced replica. Guess time will tell. I am just hoping they will still get the bucket out this year before they lose their license.

Same here mate... I really want this helmet so badly...!!! I hope they can release it really soon, cause I will get it on the spot !!! With this helmet, I will be able to "almost close" my boba project... , and I'm sure it will be the best helmet out there (talking about shape, size, curves, sharpness, etc etc ), and will be, from my point of view, the most accurate out there... (off course, not counting the RS casted off original helmet )...

I have been assured the bucket is definitely coming out folks so no worries...this is barring some whicked strange unforseen events.

Can I get pictures of the MR helmet anywhere?
J

Anyone have any info. on when this lid will be up for pre-sale to MR collector's society members?
Does anyone have recent info./ pictures on this helmet?

I had posted some info and pics of the helmet from CIV which I was told was a production peice not a prototype by the head dude from MR. I can't find the thread now but here are the pics and I will try to answer some questions about it.

First it is lined, it has a padded lining much like the MR clone helmets. It is very confortable to wear and has a removable pad in the dome so you can adjust how it fits you. The padding did not feel too hot or restriciting.

The helmet does have some heft to it, I was very supprised when I picked it up at how heavy it was. But it feels sturdy and nice.

It has an accurate green face shield.

The paint job looked decent considering how much detail was involved in that helmet. It is of course not nearly as good as one of Spidey's or Lee's but then you didn't really expect that did you?

Now on to the pics; 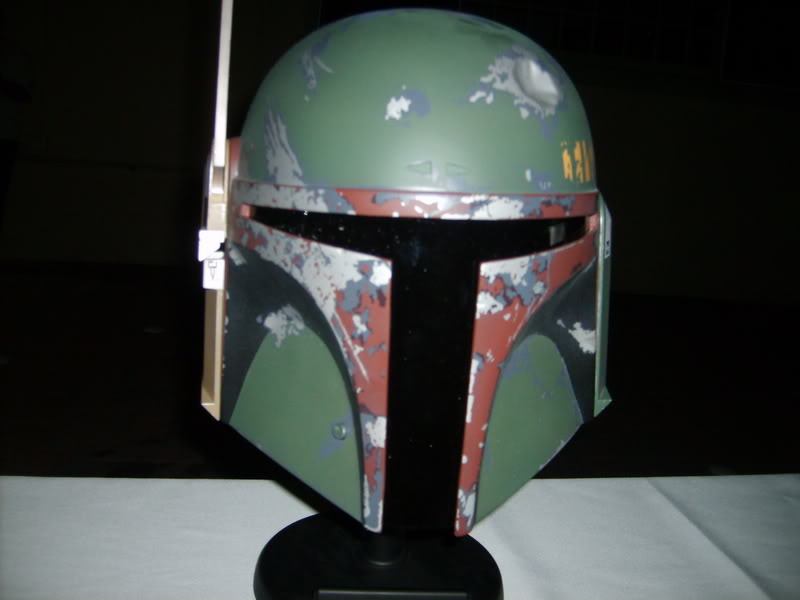 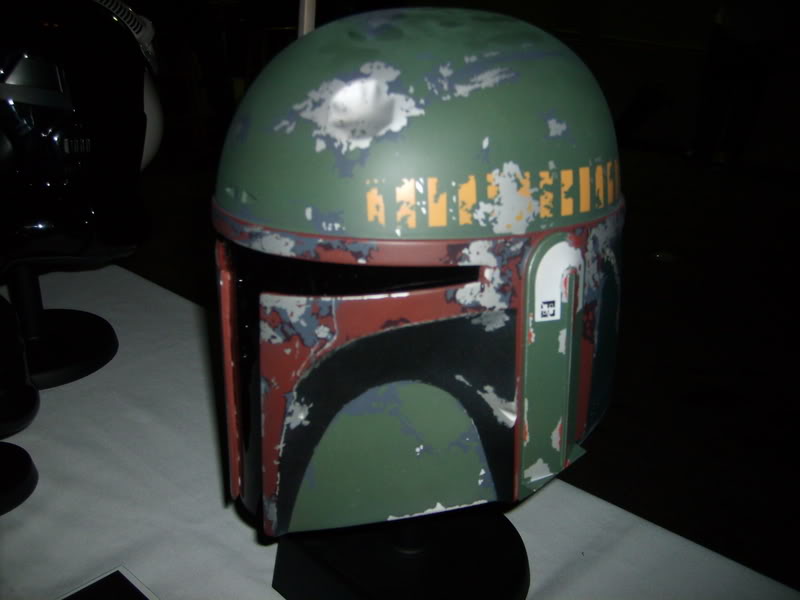 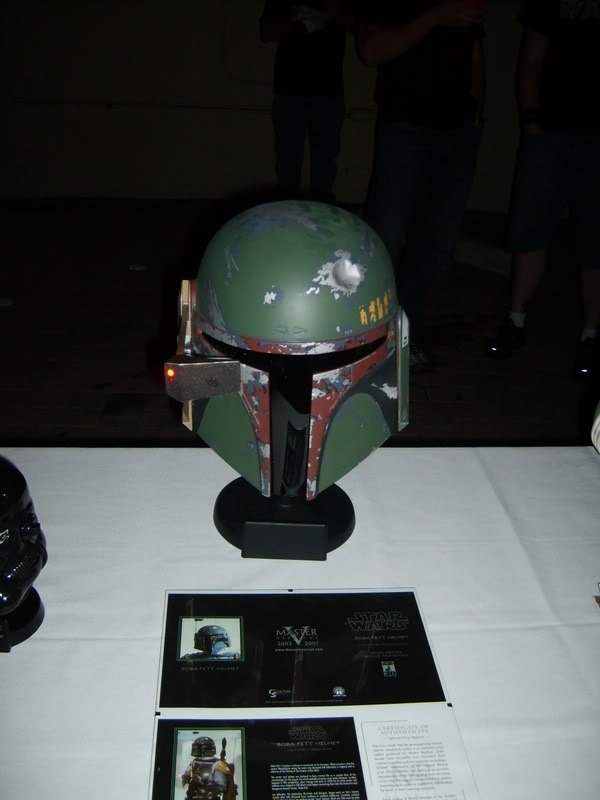 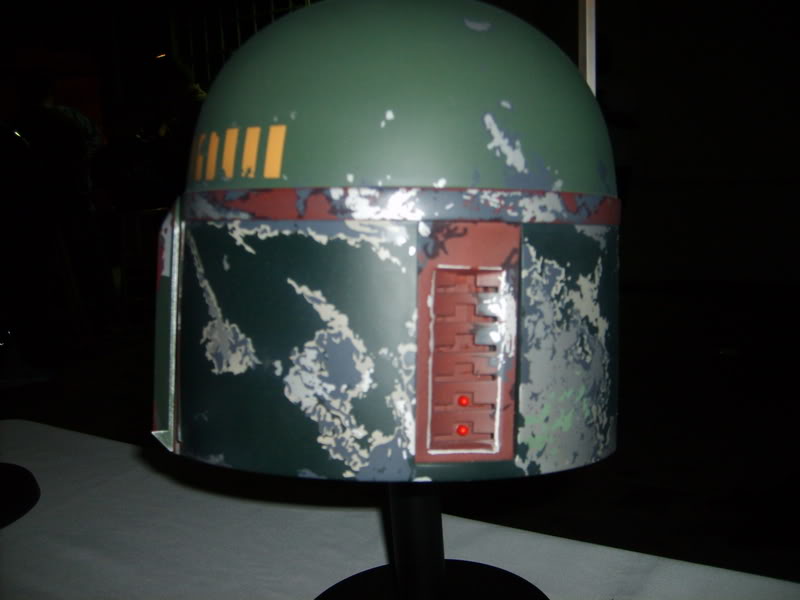 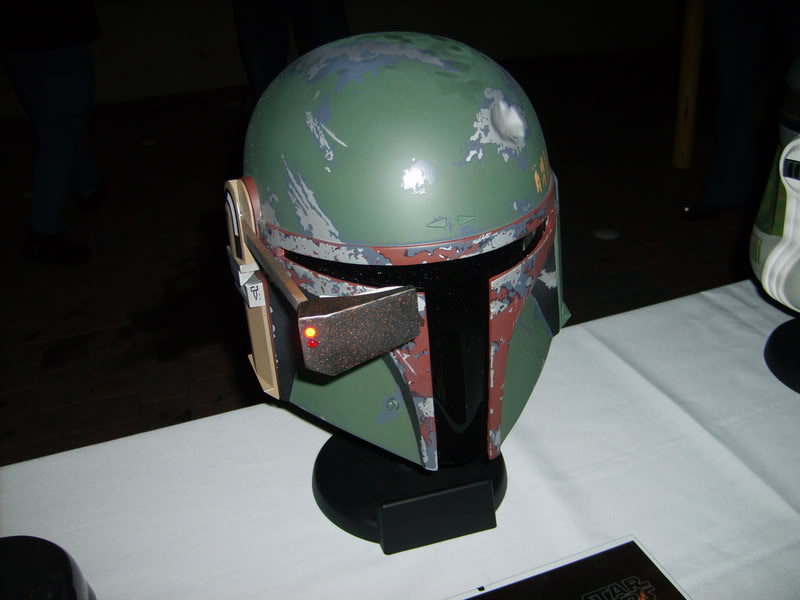 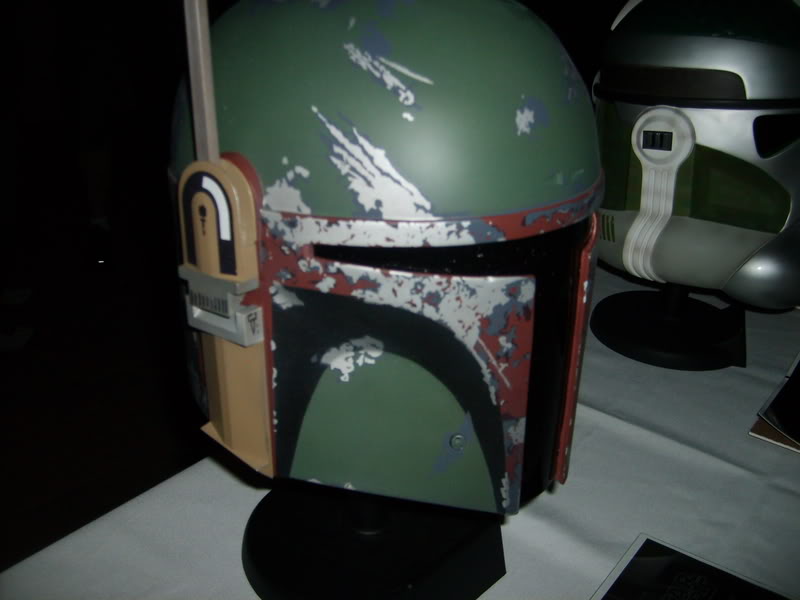 And of course a couple with your's truley wearing it! 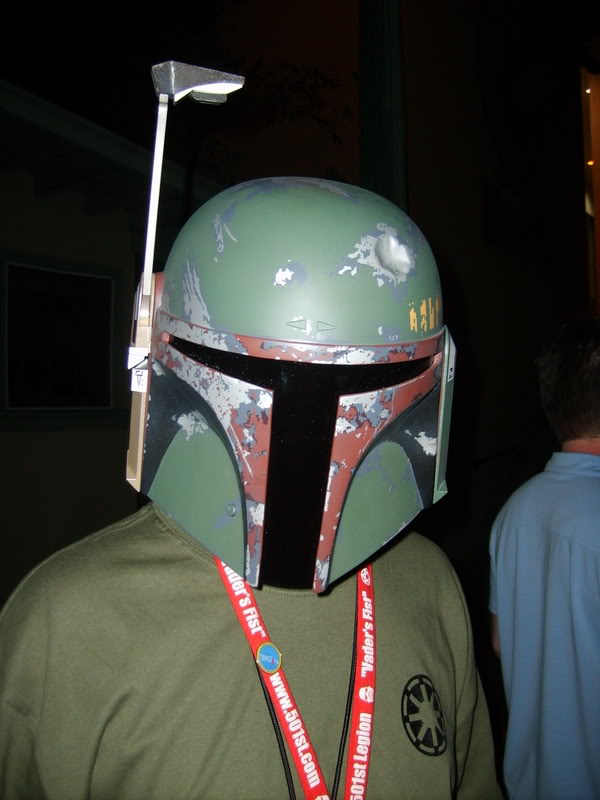 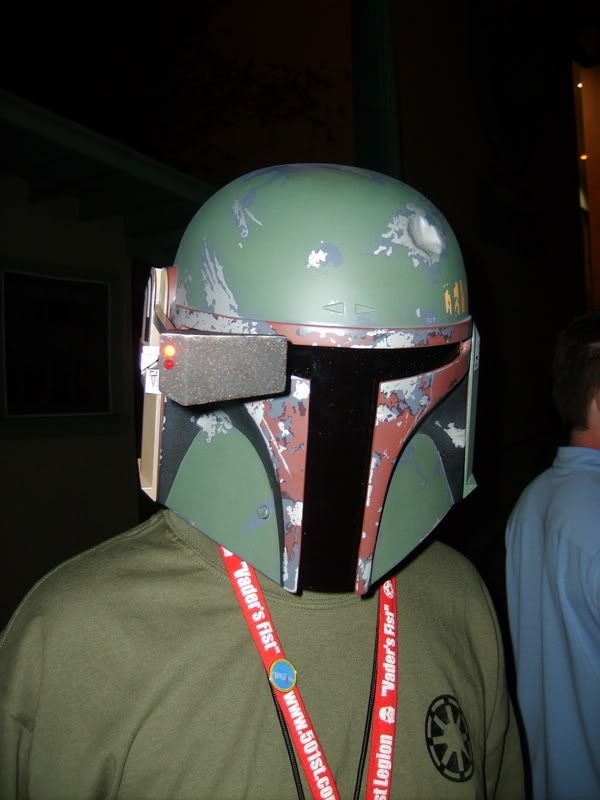 Oh ignore the dusty looking finger prints in it. It was kind of cold that night and there was dew forming on the lid and people were touching it.

I forgot to mention the guy also told me that the paint was going to get some more dirtying up prior to shipping.
R

Still burns me they insisted on putting that PP3 scratch on the Left outside cheek in the photo. Also notice the taper down the centerline of the faceplate that is a prime example of how these helmets can look different based on construction method..the ROTJ does this too.

A
Looking to buy/make my first helmet!

A
Looking to buy/make my first helmet!