Keep up the good work man.

Ok, so I'm almost done. Just this backplate issue. The UKG won't approve it with the gap I have. This is the full suit on, with some minor fitting things, note the gap on the shoulder. 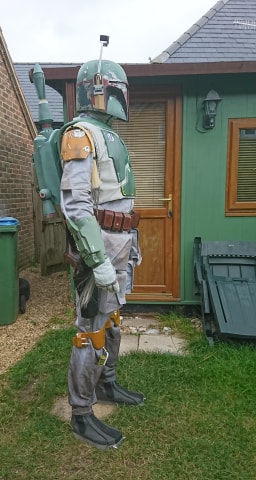 Here it is without the vest on: 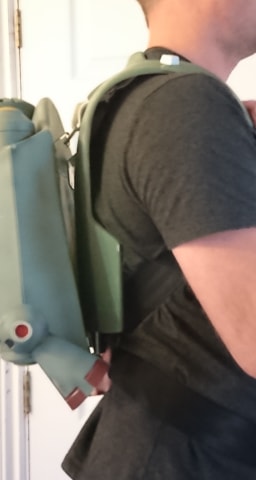 This is the issue here: this bit sticks out and pushes the backplate out. It's been suggested I move the backplate in, but it barely reaches the collar as it is. 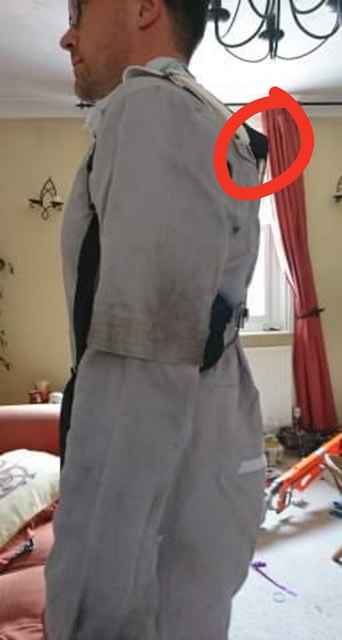 And the view from behind. 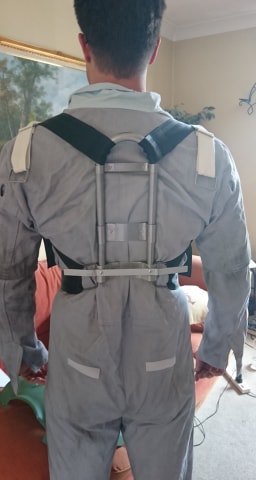 This is the backplate with NO frame underneath at all. Even then there's a gap. I've tried reshaping the backplate but only succeeded in ruining the paintwork and cracking the rim. 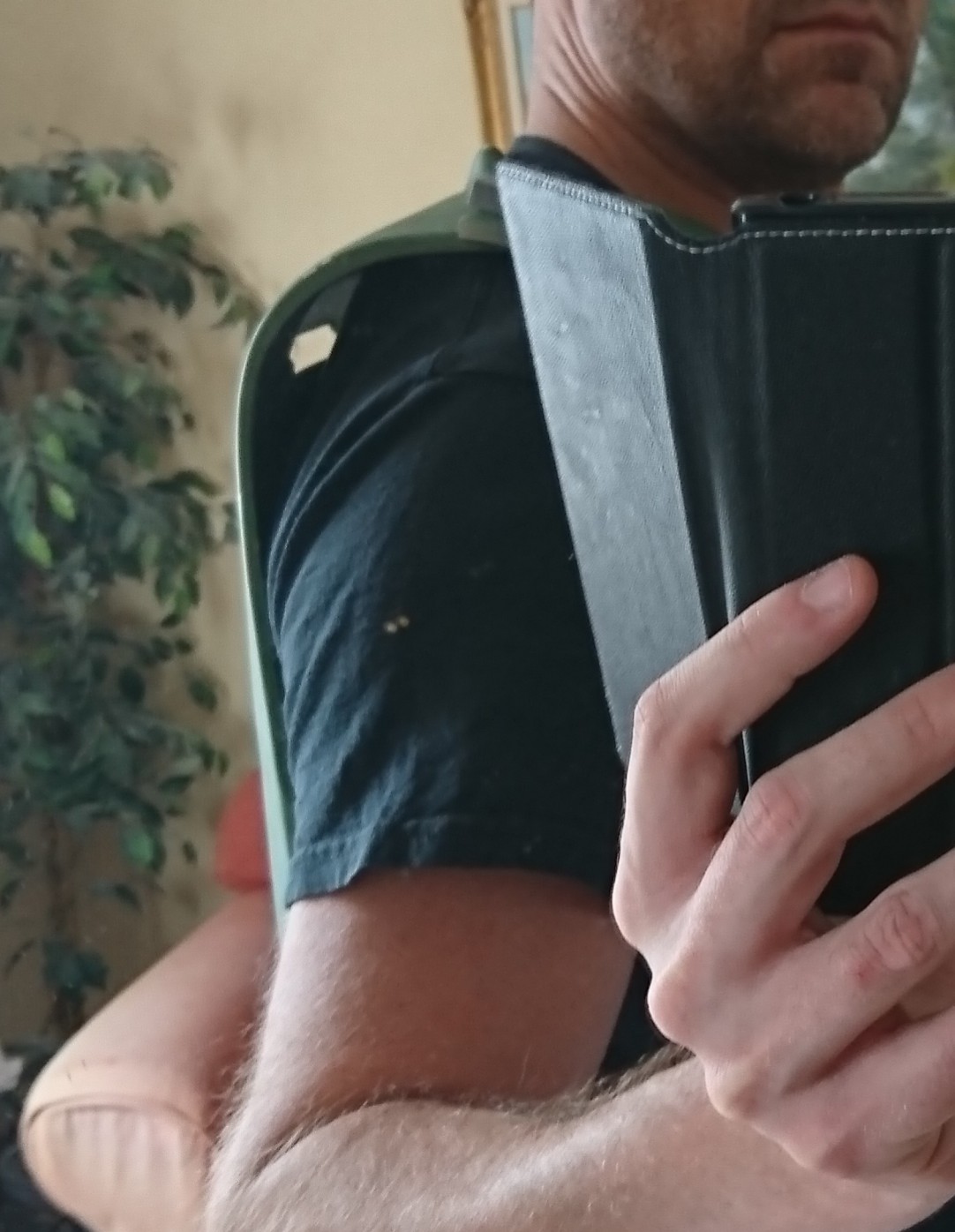 I'm a bit stuck quite frankly. It's been suggested that I bend the frame. I've thought about shortening it. I can't lower it any more than it is, there simply is no way I can make the backplate fit over the frame.

So, any suggestions? It's a BigDane frame, which is what people use. The armour is Bobamaker v3, which it has been suggested is too small. Do they not work well together? I've asked both and neither has any suggestions.

This is what it all looks like together, any other suggestions? 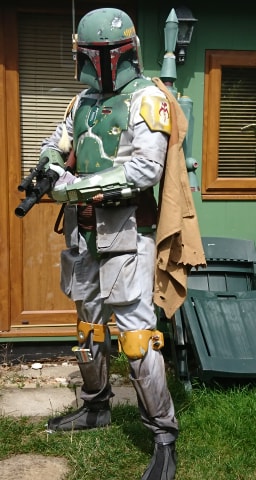 I think the whole thing's just completely borked... Got a massive tax bill to pay so the question is whether I just hang on to this and hope for better times or sell it and stop beating myself up over it. I got close but it's stopped being fun when everything's just been a huge issue.

I have BM armor and a big Dane harness , still not sure exactly what’s going on here. If you think the armor is too small it’s possible i suppose. I’m not sure of you stature type but I feel there is always a small gap in that section. The other option is Reposition your backplate where it meets your collar. Move the two pieces closer together. You might have to drill new holes for you collar studs but no harm no foul.

Another thing. Too many people rush through there boba build. This build take months even years to complete. I wouldn’t be in any hurry to complete it if you want a great outcome. You rush it , you wreak it is what I say .

What about putting some Velcro under that part of the backplate so instead of making a gap, it sticks to the vest? Your harness might be in the way of that though.

And do you have a pic with just the armor and vest on without the jetpack?

NikTrooper said:
Might have cracked it. Elliott, whom I've pestered more than he deserves, suggested some foam at the bottom. Worked pretty well. Also tightened the top straps. My poor daughter was drafted in to help.

In this shot it looks like your backplate is just sitting too high on you.

It's the black plate it seems. I wonder if it's possible to shorten the straps of the harness.

The pictures of you suited up look pretty good, tons of fetts have that gap right there. I never knew it was that big of a deal.

They can't be closer together. There's so little space it's pulling the collar back. The back can barely reach the front as it is.

Try putting a pad on the inside bottom of the frame at your waist in order to make the frame sit straight up as seen from the side.
The top of the frame won't stick out relative to the curve of your back. I show pictures on the second page of my sight-The Builders ESB build.
We had similar problems with the top of the frame and this helped us a lot.

I would bend the frame

If the frame, back armor, and jet pack are flat together and sitting vertical, which I think
would be optimal, then you may need to look for a different piece of back armor to better match your body type.

Try a different harness that is NOT movie prop accurate. a cloth type! Get approved then wear the accurate one after that.

That type of harness isn't required to get approved. because its hidden and NOT shown in the movie.
don't stress on a detail like this. I spent years wearing a different harness then only after my itch to be more accurate did I make one.

Sixxgunn13 said:
Try a different harness that is NOT movie prop accurate. a cloth type! Get approved then wear the accurate one after that.

That type of harness isn't required to get approved. because its hidden and NOT shown in the movie.
don't stress on a detail like this. I spent years wearing a different harness then only after my itch to be more accurate did I make one.
Click to expand...

True, try a MoW harness. Fabric ones tend to tug a bit more from what I hear but it's less work than having to buy more armour.

NikTrooper did you ever fix this issue?

Sort of. I got approved on the the proviso that I got it fixed at some point. I'm considering cutting it down by a couple of inches, which should sort it. But for now I'm approved, BH-44020.
You must log in or register to reply here.
Share:
Facebook Twitter Reddit Pinterest Tumblr WhatsApp Email Link