I finished my blaster today. Here's two small pictures, I'll post more if there is anyone interested.

When I started thinking about the sling, I didn't want to leave it off like on most of the replicas I see, but I didn't just want to just glue it to the back either. I wanted it to look like the real deal. What I did was I bought a leather dog leash, then cut two notches in the stock of the gun on the top and bottom and epoxied the leash in the notches. Then I epoxied a strip of ABS plastic on the back to cover the notches and leash. I added some bondo and some sanding before painting and it all looks like one piece now. viola.

Now thats its all done I am very happy with it, it's missing a couple greebles, but it gets the job done.

What do you think? If anyone else has done a sling gun, I'd love to see some pics.

So I lucked out. TDH vet AFettFullofDollars was gracious enough to sell me a PrePro Blaster kit he had in his possesion for basically a song. This was the only part of my PrePro costume I was really worried about getting, and I was elated to send him my money in exchange for this gem.

This is going to be my thread on buiding it.

Here it is. It's resin, its really rather nice. It's not 100% accurate to the original as its missing the trigger and some of the geebles on the original camera stabilizer. Its got the right shaped handle though (which is a problem I've seen with other kits and PrePro guns), and the details are nice and crisp. Its a little more cleaned up here then when I pulled it out of the box. Whoever had it before AFF$ was using some white filler
to fill the air bubbles. All and all it's very very nice, but needs some tlc.

Here's where you can see I drilled a small hole for the trigger. I found a rectangular button in my box of junk that was probably from some video game accesory, or old electronic toy or something. I sanded down the underside flat and sunk a piece of metal into it to allow it to be inserted into the gun.

Viola, its a little more accurate then it once was. Next up is another greeble that existed on the original, two little pill shaped pieces on the left side of the handgrip. Luckily I stumbled on another piece in my box of Junk that suits my needs. It was originally a backpack to a Stikfas Fireman action figure:

It needs alittle more shaping, there was a small square on each of the pill shaped pieces which I'm filling in with bondo, and then it needs to be mounted, but its the right size and it was there so I used it.

Here's a shot of the original for comparison:

Next up
is for the other side, there seems to be a lever of some sort and another pill shaped greeble on the stock, along with the sling itself...

I think I got a piece for the other pill, but nothing for the lever yet... But I'll find something.

Anyways thats it so far. Thanks for looking, and let me know what you think.

Here's the latest on my blaster. I went with the Black version of this gun, just to be different. Most Sling Gun's I've seen are blue. The gun in nearly finished, I just have to add some black tape around the barrel. I'm currently working on the stock now, adding a leather strap. Hopefully my plan will work out, I just need to wait 24 hours for the glue to cure to find out if I ruined my stock or not.. =) Then I have to buy some sintra.

BTW- the lighting on this shot is making the handle look spotty- its not. I used Duplicolor Semi-gloss black. 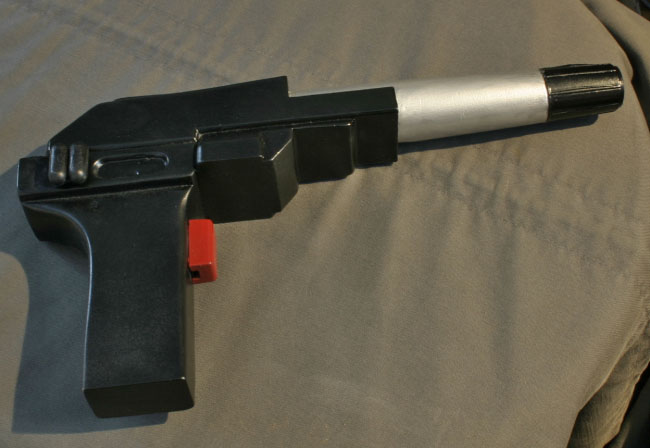 WOW, cool!
Thought about filling in the bottom of the trigger button?