After looking around a bit, I could not locate a thread of "Straight Shooters" Vs. "Bad Sellers." If there is one around here somewhere, please point me to it and delete this.

Anyway, I had a bad experience with an eBay seller and figured I might help inform potential bidders - man, do I wish I'd had such a resource available to me before I bought from this guy!

I also re-read the FAQ Guidelines before starting this thread and I don't believe I'm violating anything.

OK, so back in mid-March I bought a set of "Finished ESB Boba Fett Gauntlets" from eBay Seller Frank-N-Son-Part2. They didn't arrive until the second week of May. Granted, he's in the UK and I'm in Los Angeles, but that's still a LONG time.

What arrived was a crushed box, wrapped in a garbage bag with a name tag stuck to it. He said he was going to send the package with some sort of tracking info, but every time I asked him how I could track the package, he claimed his wife had posted the package and he didn't have the number with him. No surprise when the package arrived, it did not have any sort of tracking number on it.

The gauntlets themselves were not what was pictured in the auction. The paint job was a gloppy green mess with silver splotches. I thought I could just sand & repaint them, but then there was the problem of trying to get them to fit together. Nothing was aligned. For instance, I present to you the left gauntlet:

He suggested that I should squeeze the bottom portion hard and it would fit... all that accomplished was that the flamethrower parts popped off.

Finally, I tried to contact him after discussing the gauntlets with some other prop builders and they were of the opinion these were recast, hence the soft details. His reaction? No reply.

After a week of e-mails with no reply, I left him negative feedback to which he finally replied: with a nasty e-mail (claiming his wife read the e-mails I sent but did not know how to reply) and negative feedback for me. (That makes sense, right? He sends me crappy merchandise which means I deserve negative feedback?)

To wrap this up, I'd like to state that I have ordered new gauntlets from a reputable TDH member and hereby suggest you think twice before bidding on a Frank-N-Son-Part2 auction.

Meanwhile, how about a thread in the Cargo Hold where we can list people we've made deals with and give them the thumbs up? I've had some good experiences with darbycrash, OPPI, and Rimshot!

Good luck and be careful out there!

yikes...sorry to hear about that...I will make a note of it though.

Yikes .. those look like the gauntlets that I got for my birthday ( in kit form ) ... talk about ugly rubbish !!!! uke

I bought a kit from that guy some time ago now and I had the same problems, the clamshells just wouldn't fit together. It's pretty impossible to bend the shells to make them fit, as any sane person will know fibreglass doesn't exactly bend!

I have seen his auctions and have actually considered bidding on them before. Yet another instance where a TDH member has saved my wallet. Thanks for the head's up!

Thats the left gauntlet? Whas with the hose connectors?
S

Thats the left gauntlet? Whas with the hose connectors?
Click to expand...

Both gauntlets have hose connectors. I figured I would cut this one off & bondo it, but considering there's nothing much I can do with these anyway, that's become a moot point.

I always thought it would make sense for this gauntlet to have a hose, tho... for the flamethrower fluid or something. Ah well.

I started a Good Trader / Seller list in the Cargo Hold - feel free to add the board names of people you've had good experiences with!

Man that is the scary thing about ebay, ya just never know for sure what you are gonna get. I will say most people are pretty good but there are always those few out there.

God, i think i spoke to this bloke about some of his bf armour on ebay. Im so sorry you have had such a bad experience, cant beleve it + bad feedback!!!
Well now people will no not 2 deal with this guy!! I cant beleve how bad the gauntlet is tho. I would be ashamed if i had sold and sent someone that!! what a nasty guy!!
Hope you new gauntlets will be better!!

i brought my gauntlets from this ebayer and had to modify the hell out of them but they arent too bad(uncrosses fingers) my problem is living in the uk and i needed a set of gauntlets quick.i did buy some bf armour from him but the less said about that the better.
D

I bought some GREAT QUALITY gauntlets from manowars studios, they came out really nice. I recommed him.

I wish we had a list of bad buyers to avoid, so that we can cancel bids and get paid on our items in a timely manner. I would like to suggest ebay buyer Metalgreyfox, he refuesd to pay for my jet pack that he won in my auction that ended 10 days ago (My auctions clearly state payment is to be received within 5 days of auction's close). Oh, the things I wish I coulkd say without violating all of the rules on these boards ...

For Gauntlets I would check the Seller's feedback carefully,
on page 3 of his feedback he had two negatives on Fett stuff:
http://feedback.ebay.com/ws/eBayISAPI.dll?ViewFeedback&userid=frank-n-son-part2&items=25&page=3&frompage=-1&iid=-1&de=off

After seeing that, I would not have bid on his items.
S

please do yourselves a favor. Get a set from "ruffkintoy"
his are great. I've had 2 sets from him already, about to get a 3rd.
(I built/painted/sold the first 2 while waiting several months for my SFP jumpsuit) 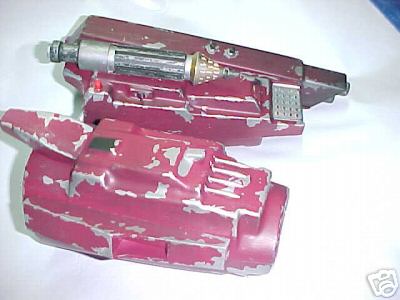 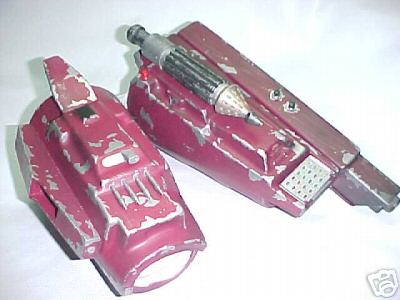 I have been watching these forums for awhile while building my suit. Nothing real fancy, but satisfies my needs. I also purchased a set of gauntlets from this frank and sons. I guess you get what you pay for. The kit was only around 80-90 USD. I am sure the higher end kits are more expensive. Yes, I too had to get creative to get them to fit and the details are far from sharp. They are not the best, but they are also inexpensive. You may not be happy with them in the long run, so if you are picky...spend the extra dough.
S

Ruffkintoy's gauntlets run alittle about $125 US
That's not much more, & the quality is top-notch.
E

mind you i brought my knee armour from him and on the plus it has metal darts which are a nice quality,shame about the knee armour.

Brutal! Especially when sellers have pictures that are not of the product they are selling and don't advise you. The feedback is always a bit tricky. If the other person hasn't left you feedback then you risk getting bad feedback thrown back at you for reasons not your fault. You know you can respond to your negative feedback so others can see that you didn't deserve it..
E

and dont get me started about his flak jackets!!!!
S

We seem to have touched off a nerve in ya, English-Boba!