I should be getting my Rubies Clone Trooper helmet soon, and I want to modify it to look like this. Any suggestions on adding that huge dent? When I tried to put another dent in my Rubies Fett helmet with a hammer, I ended up cracking it :facepalm Don't want that to happen again.

yeah I dont see a dent either but... If you wanna dent your rubies, grab a dremmel tool (or a normal drill doesnt matter much) and use that as a saw, so just keep drilling and move the drill in a circular form at the place you want your dent to be.

now you've got hole in ur helmet, now get a piece of... well I used aluminium, but I think even cardboard will do, and make a circle out of that material that is bigger then the hole in ur bucket.

now cut out 1/8 or something from the "aluminium"circle, so it looks like a pie with a piece missing, or a pacman... get teh idea?

then, fold the "aluminium" in a way where it gets like one of those japanese hats, liek Raiden's one...from mortal kombat? (I do hope I'm making some sence here)

glue that "hat" to the backside of the hole on ur bucket, now just fill it with bondo or kit and sand it later (if you work properly you dont even need to sand it, just make it a smooth surface with your fingers) tata... worked for me, I'll post pics later. (now for a Fett, this is NOT the most acc way to go but... if yar doing a custom thing... clone, storm, arc...whatever, should do) 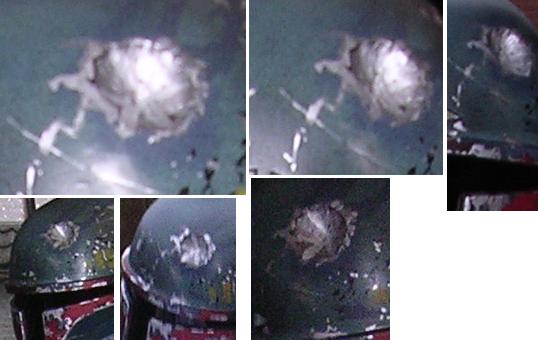 Raidens hat.. yea.. lol.. its called a "kasa" but yea we understand. nice idea, might add to "drill" your hole bigger, and make the hat bigger then the normal dent you want, that way you can carve the bondo into the right size you want, including the "rough" edges around the real dent. (its not a perfect circle!)

If it is a Rubies helmet, he should be able to get away with using a heat gun and some sculpting tools to create a dent by pushing it in once the helmet is soft in that area.

Im planning on getting a rubies as well, but how do I cut out the fin, and what do I replace it with? And what else is there to modify besides the visor?

:facepalm I wouldnt risk the heat gun.. wouldnt the risc be deforming more then just teh dent?and cuttin of the fin... uhw well... Im no expert on clones...

Sorry, I posted the wrong picture. Meant to post this one. I don't have a dremel, so right now heating seems to be the best option.

let us know how it works out

I should have my helmet by Friday. First step will be reshaping it, then add the dent, paint and weather, and add a new visor.

I still dont see a dent

Look right below his finger on his helmet.

does anyone know how to remove the visor from the aotc rubies helmet safely and/or completely?