Excellent stuff. I think I stumbled across this a couple of days ago on deviantart and I was wondering who this was lol

Wow Thomas, that´s indeed a fantastic costume! Awesome craftmanship you have put into this! Do you plan to make pulls of that mask?
S

I'm pretty sure he said at the beginning of the thread that the moulds were trashed whilst removing the cast parts?? I could be mistaken though?
Y

In honesty the costumes that have parts and details you cant see are a part of the old Star wars logic. Going the extra mile in trying to convince others your no longer in a costume, but you are that person.

An Amazing reproduction of Darth Bane. You have great gifts when it comes to props and I'm glad I share a Hobby with the likes of people who represent it as well as you.

Still working on this, and several other projects. I rather suspect/hope that shall be the case for a long, long tyme. Thank you to TDH for your support. I'd like to share some images of my Darth Bane costume as recreated by others;

Darth Bane, Custom one/sixth scale action figure
Created by Nick Gagnon of "The Underground Studio"
http://theundergroundstudio.net/darthbane.html
Based on my costume.


As to the inquiries about reproductions of these pieces being made available I'll comment that I hope to be able to. I am still working on the hard masters. For instance the form of the helmet is there, but closure mechanics need to be engineered. At some point I'd like to make a new mold and produce a shatter resistant version of the helmet. When I achieve this goal, I will have ability to offer reproductions.

Sigh. I have wanted to offer my costume work, but lack of studio space, start-up funds, and not wanting to jeopardize my standing with LFL with license violation has proven to be quite an obstacle.

I almost had a licensed deal with one of my other costumes, the Imperial Knight armour from SW Legacy. 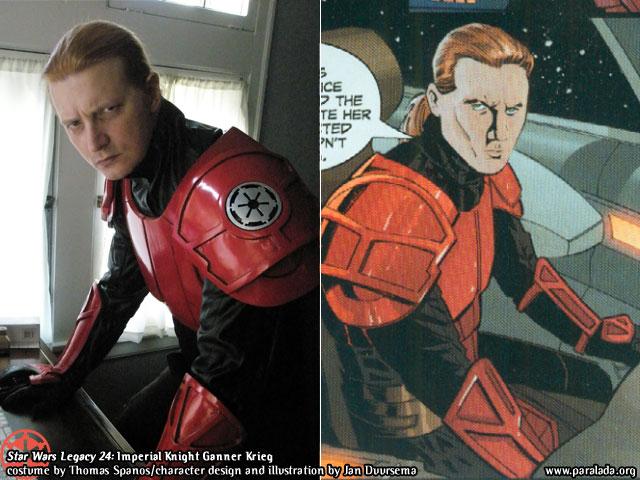 The company--let's call them Mr.--holds a license to do high end SW costuming. After much research and initial soft-goods development, Mr. contacted me with a fabulous offer, expressing interest in producing my Imperial Knight armour as their first EU product. However, before this project could occur, they need to get approval from LFL.

After the initial presentation, LFL was quick to point out that Mr.'s contract--while covering all characters from SW movies, video games, television series, animated movies--did not extend to comics. For this reason LFL canceled the project.

No matter. I have costumes to build and refine.

What I meant by full Orbalisk Armour 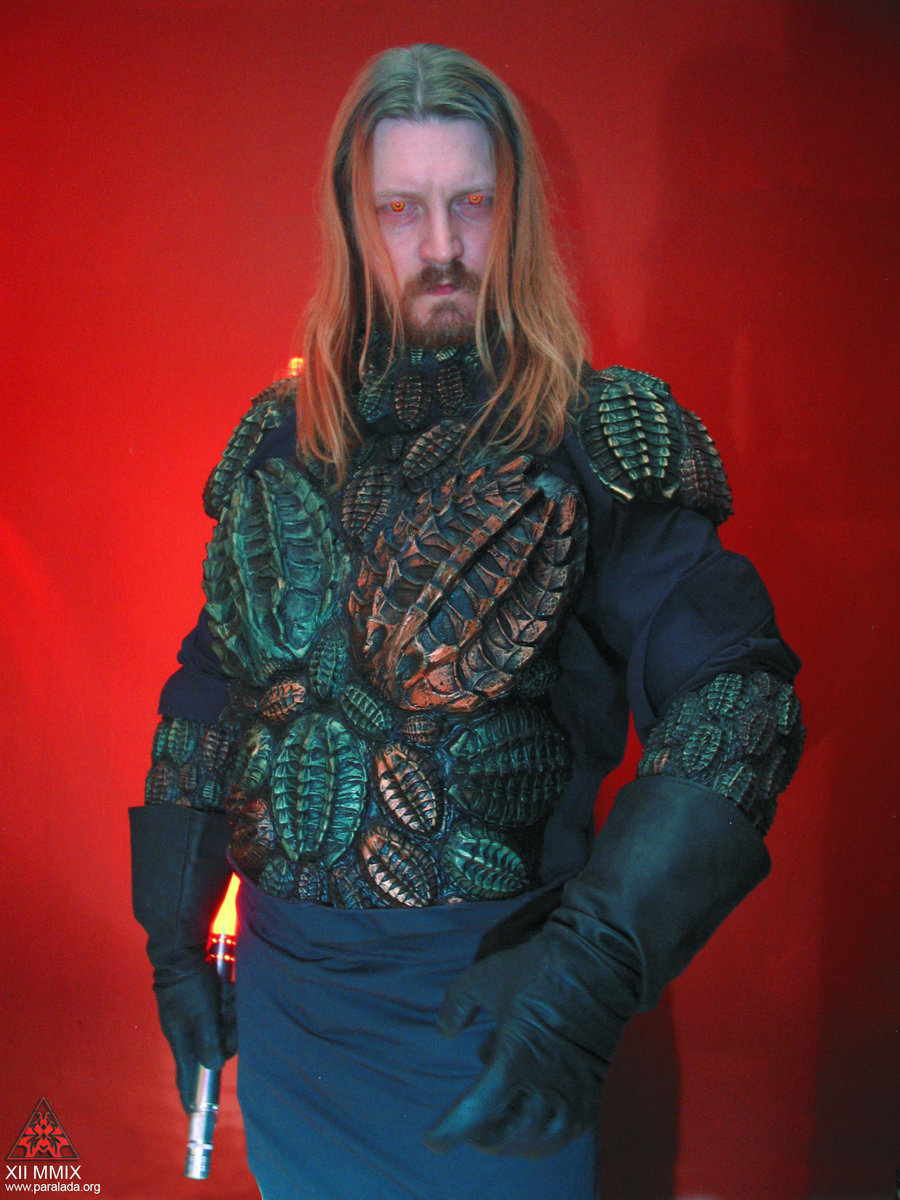 The continued progress of my Darth Bane and his Orbalisk Armour. (Seen here without helmet, cape, and hair cut.) This weekend I completed the shoulder bells and fitted closure straps to the back the gorget.

I am now set on articulating and fitting the whole upper body in Orbalisks.

Fantastic Thomas! I love what you're doing there. The eyes, contacts or Photoshop?

I won them in a contest two seasons ago. I cannot believe this was the first tyme I tired them on.

Nice, thanks for the info. Keep up this fantastic work.
A

Looking at the Hasbro action figure on my shelf right now... and all I can see is Thomas. Fantastic work!
A

This is a piece of art! Bane is one of my favorite characters from the EU which made seeing this post that much greater. Keep up the great work.

I look at the tyme that passes between updates and for a brief moment, I despair and wonder when I shall ever finish. Then I recall the projects I work on in between the updates on this project and realize I am on "schedule."

I do expect update activity to ramp up in preparation for Jedi Con, Düsseldorf.

Absolutely amazing, man!
Your costumes never cease to amaze me 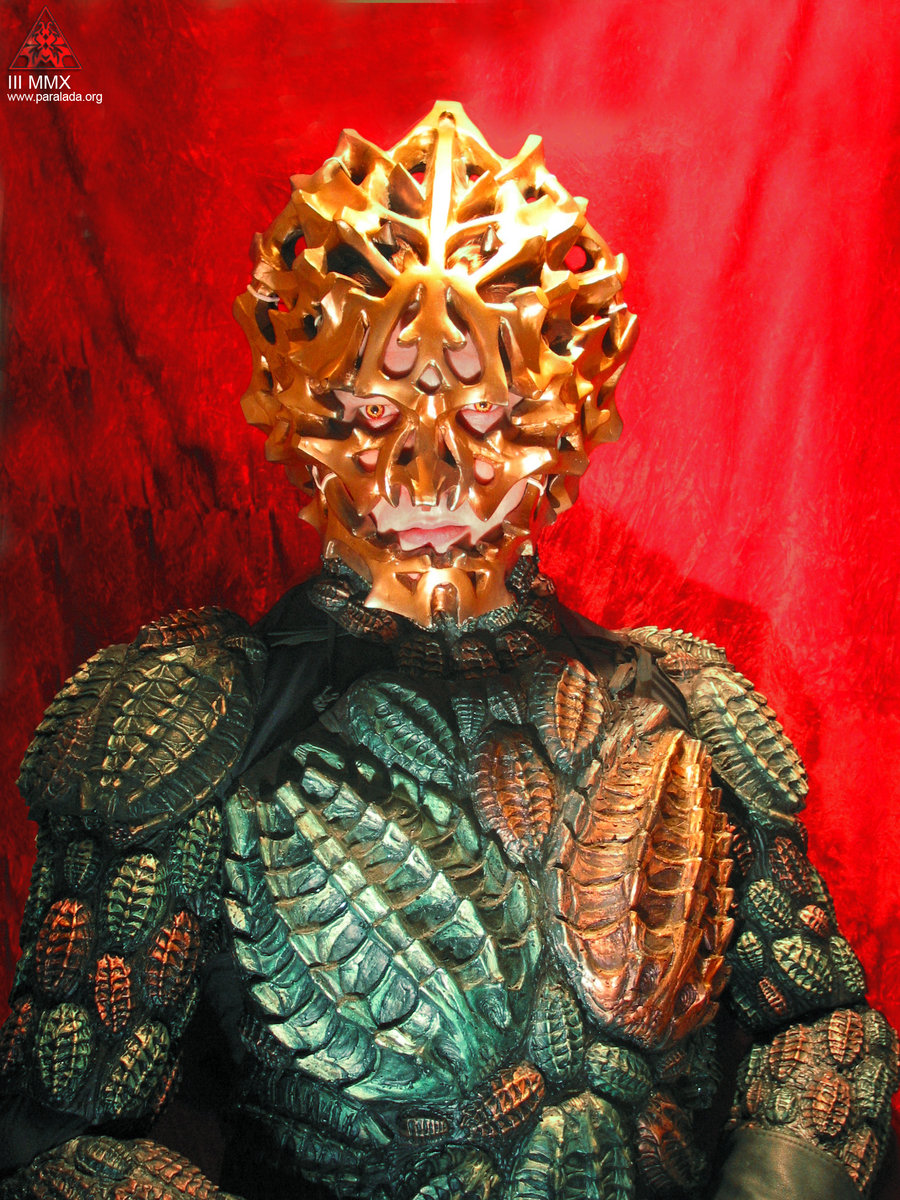 I have recently returned from my journey in Europe. The first stop was the Jedi-Con convention in Düsseldorf, Deutschland. I was determined to make this the debut of my Darth Bane armour.

The process, or at least my process, of preparing a costume for a majour debut involves buying and playing an unrelated video game through to completion two weeks before the event, going for thoughtful walks, the gym, posting on forums, shopping, thinking about eating, staring at my ceiling crying, stressing to the point that my back muscles spasm and I need a cane to walk, a visit to the doctor and pharmacist, staying up twenty-four hours cramming on completing the suit, stressing over packing, airport security, lack of sleep and an extended flight in a seat place not designed to accommodate my size, working in the hotel room to finish, and VIOLA! Done. It really is that easy.