Just a recap, I'm doing a Mando armor crossover of the Batman Beyond cartoon's bat suit. I'm kinda going for a SWAT techy look since it's supposed to be 40 years after the original Batman quit, and it's all high tech now.

Nice, can't wait to see how you crossover turns out my friend. Love your 3d work. I still do a bit here and there on my 3d stuff..... been a while tho..

But This is going to shape up to be a great crossover all the same....
T

A long time coming, AN UPDATE!

I ahve been working on and off this project, and with a month free (minus a commission and finding a job) I have time to finish the 3D and get it into reality. YAHOO! :cheers

First, here's my photobucket with the latest pics:
Bat-Mando Gallery
I still have the thigh plates, bucket, and gauntlets to do, then it's off to the Wickedbeard for the magic (minus the gauntlets)! I'm also going to be making the normal Batman Beyond Bat-suit as the jumpsuit, so I can have a couple days of cons being hot in the armor, then the last day or being cool in the spandex bat-suit. Of course, I'm going to have a muscle suit to show off.

Anyways, the latest changes to the suit are the collar has been seperated from the back plate, but will be connected by 3 straps to be secured. The back of the shins have been an on going dispute (LMAO). Hopefully, these will turn out ok. I've remodeled some pieces to make them look better. I've also added a butt plate for posterity, since I'm just using the normal Boba butt plate. I'm also going to end up using clone shoulder bells.

And the weapons: (pistol to come later)
This is the tranquilizer rifle from the episode "Slicer". A bunch of kids were sliced with animal DNA, and Batman used this to change them back to normal. Thought it would be good to use as a normal tranq rifle anyways, so here it is. It'll be a 3d model-to-prop item, probably with polyurathane. If people want one, I'll do a run later on.
I still have the grip and shoulder stock to do, but I have the main body, mag, and gun sight all finished. The magazine will be removable, and probably will have some "darts" modeled in later. The gun sight will be molded separately and attached by scews. I have insets modeled in, and I just need to cut the screw heads down. And no, I'm not molding screws
gunwip-01
gunwip-02
gunwip-03
gunwip-04
gunwip-05
Last edited by a moderator: Sep 10, 2007
T 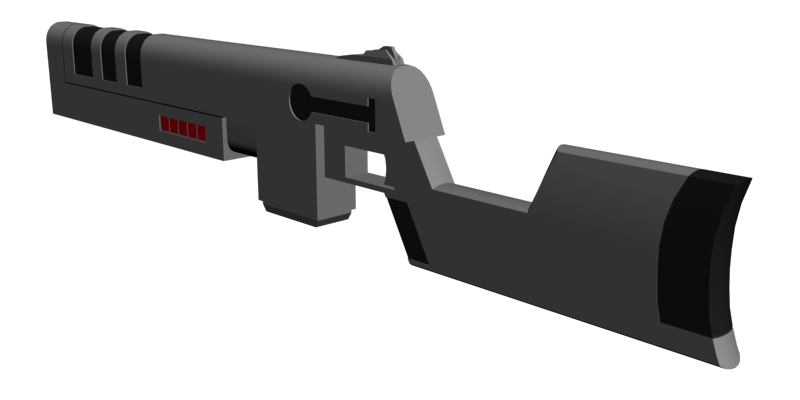 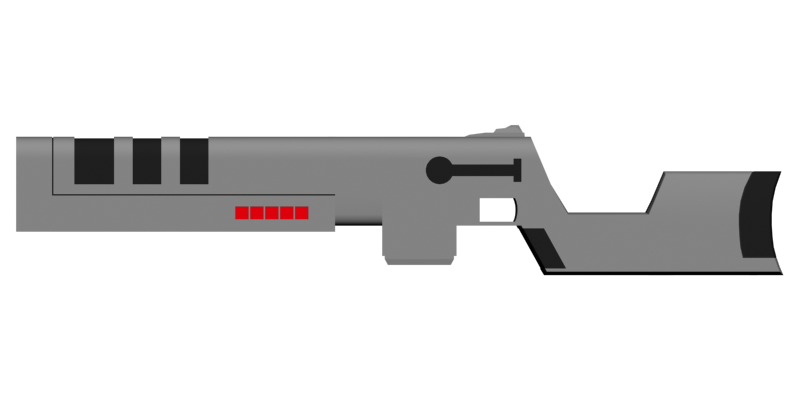 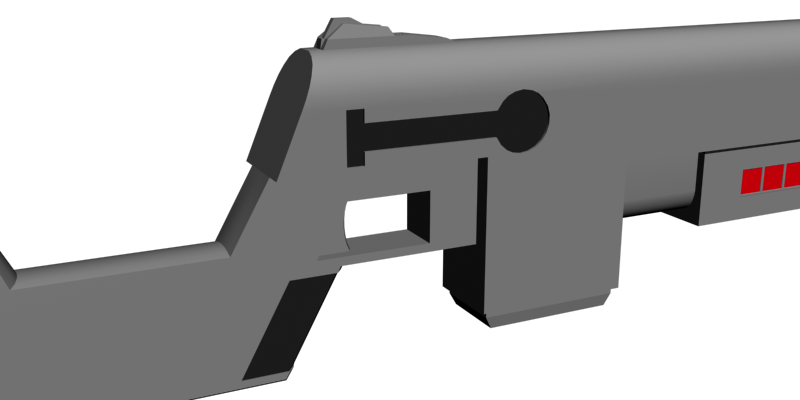 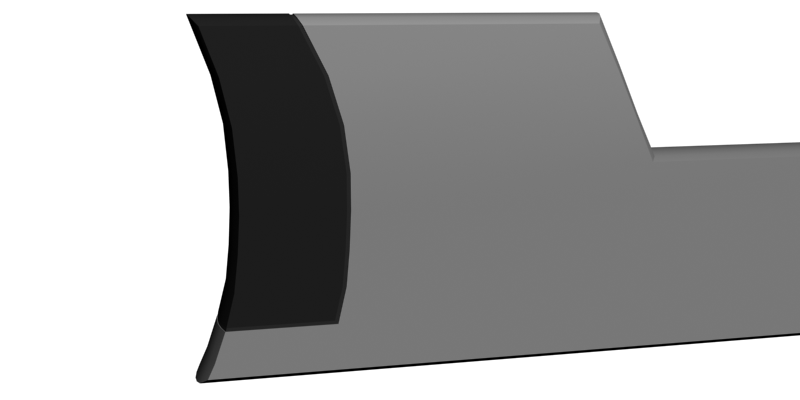 This looks really cool and I can't wait to see how it turns out. I especially like the gun, nice choice. Keep us posted.
T

Thanks I'm having alot of fun with it. More over, all I have to do now is the helmet, gauntlets, and the pistol. The pistol will be simple, the same with the gauntlets, but the helmet will take a bit of doing.

An update on the suit itself. I've mostly been refining the models themselves to make them look better. I've beefed up the arms so they don't look tiny compared to the rest of the body. I've also switched back to the old shins, and put in normal Jango thighs.

Here's a beauty shot of the bat-suit and the armor over it. 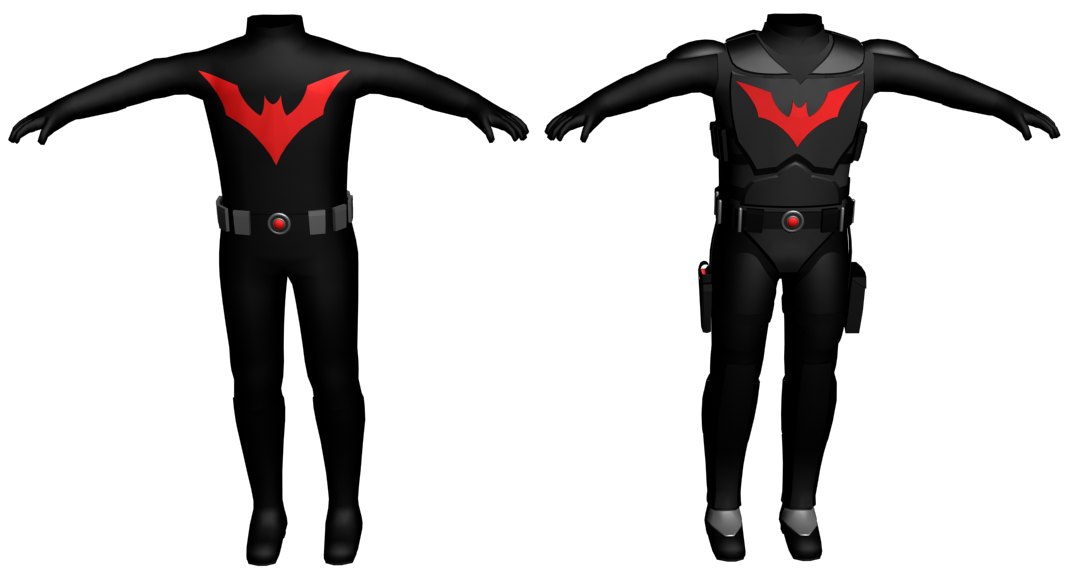 Front to show off the thighs. Notice the newly preportioned arms. 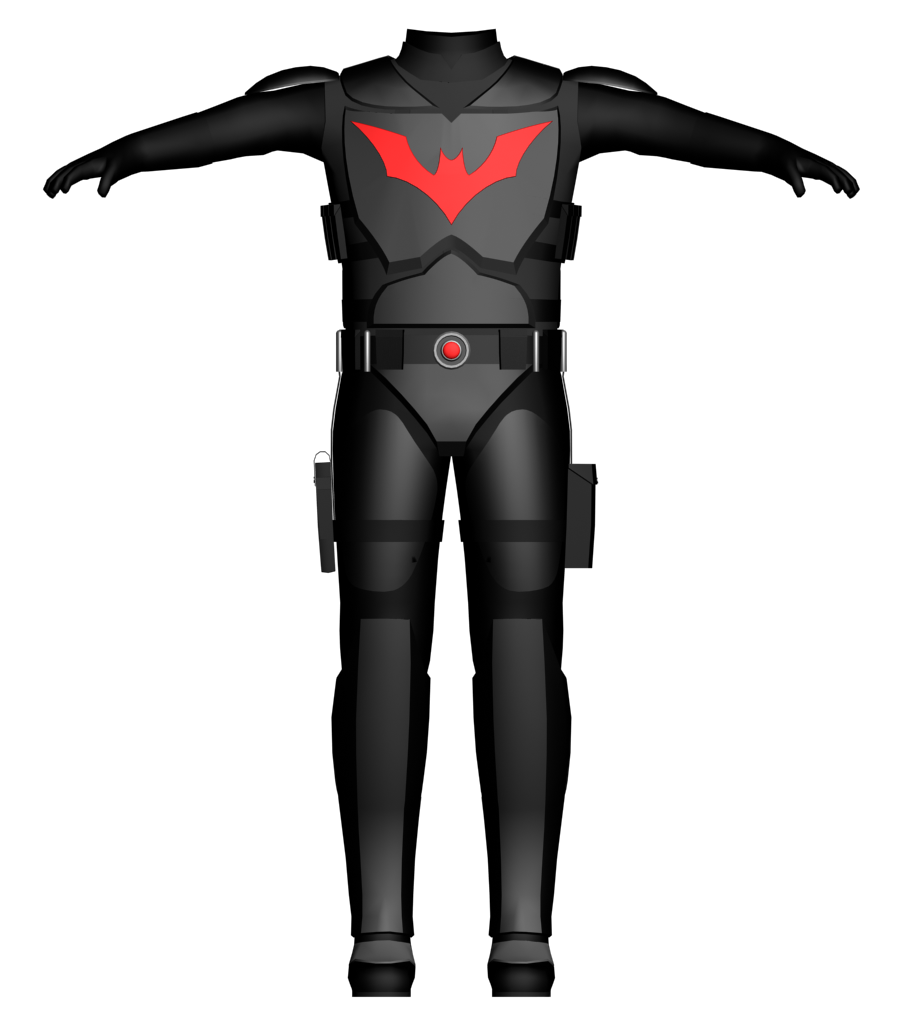 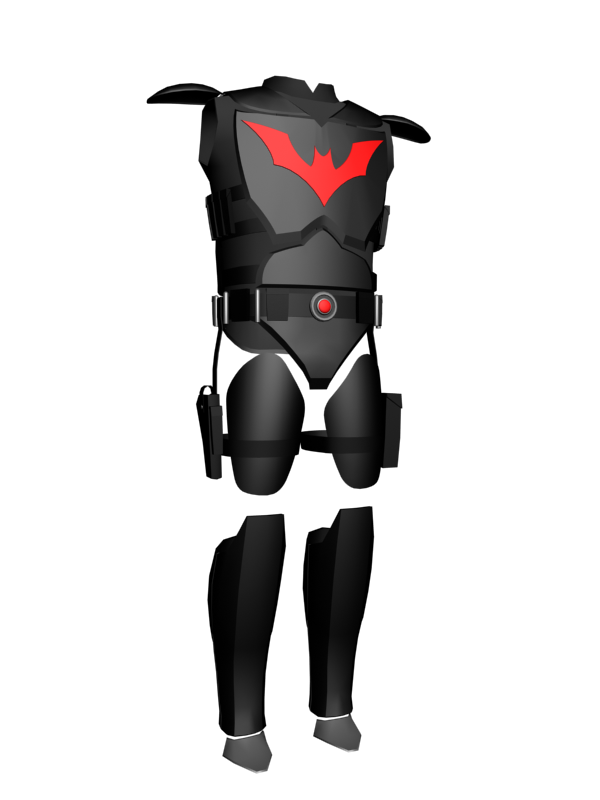 Here's what I got modeld out and planned, and will probably end up sewing most of them.
First, the bat-suit. A jumpsuit of course with the bat-symbol sewn on, or something. Still figuring this part out. The thought is, is that I can just take my armor off after a couple hot days at cons, and just switch over the gloves, belt accessories, and cowl (head gear) to be normal batman. i.e. two-costumes-in-one. 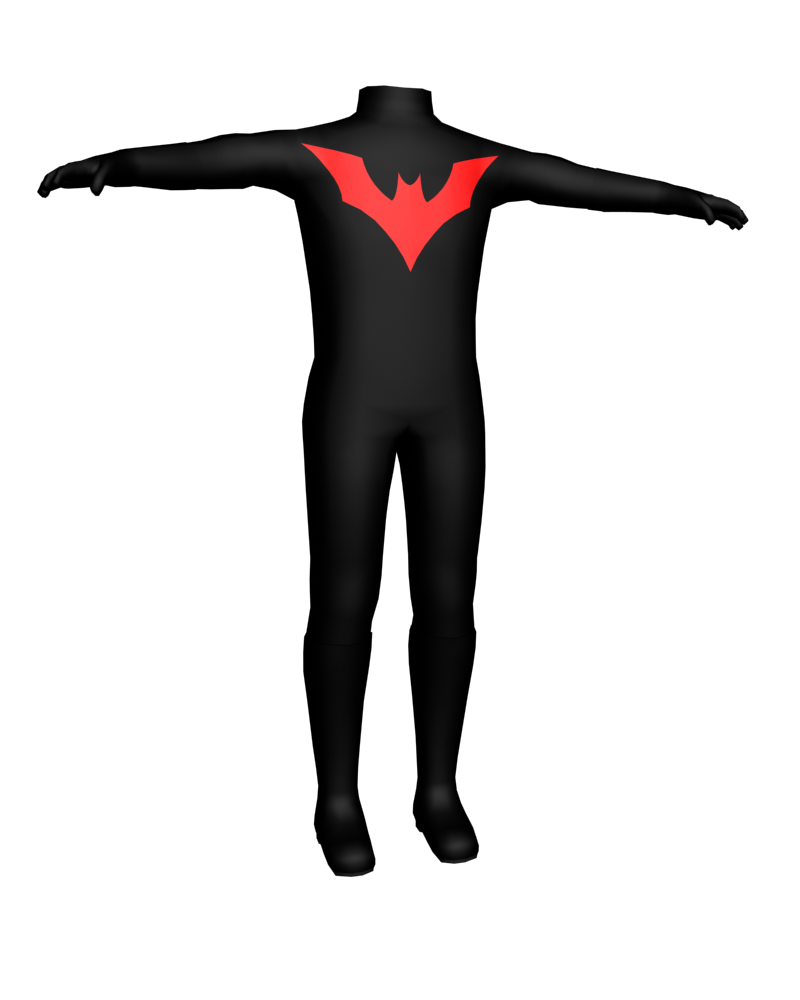 Next up is the vest. It will be a front zip up pattern when made. The collar you see is a dicky, the same thing as the stormtrooper neck seal, minus the ribs. The black above that is part of the jumpsuit. 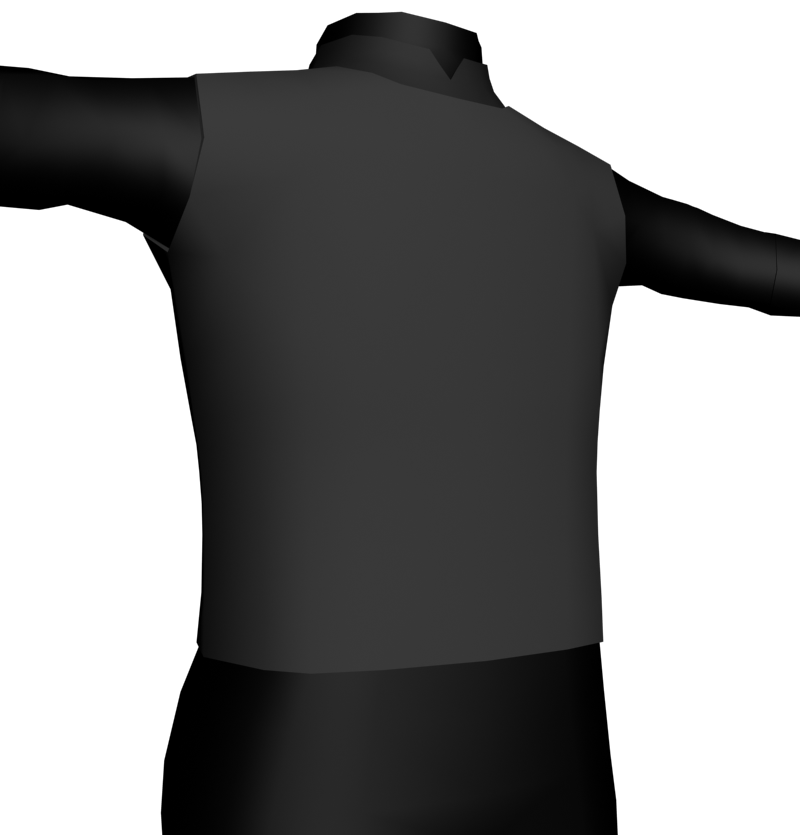 This is the belt and leg straps. The belt will be used with and without armor. The leg straps are stiched together, and the leg loop will be adjustable with one of those plastic buckles. 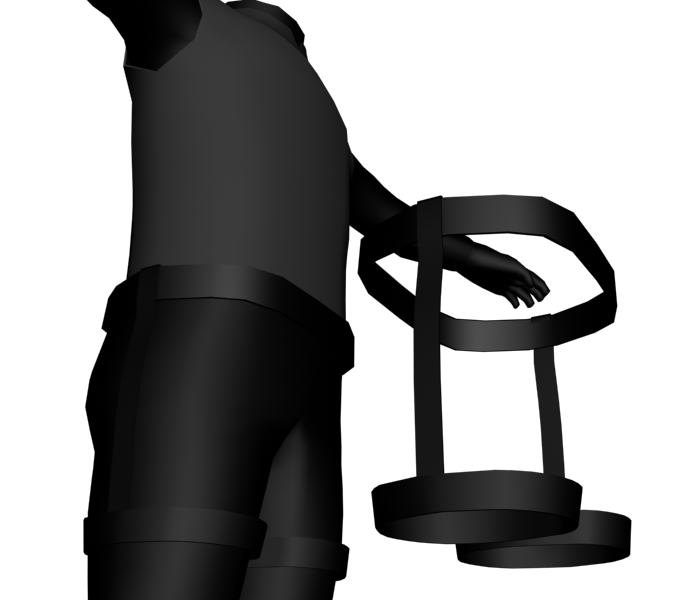 Next is the belt accessories. First up is the armor set. Black boxes, that may or may not be functional, and silver cylinders in homage to all the past bat-belts. I'll probably go with the Jedi "pen top" route when making those. The buckle is custom. Don't know how I'm going to get that done. any suggestions? 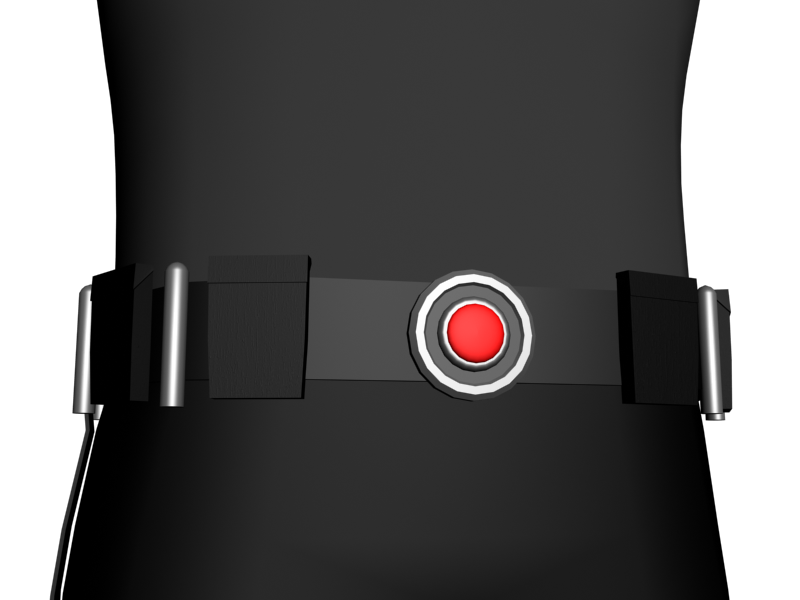 Next set of belt accessories will be for the bat-suit. The blet and buckle will remain, while the black boxes and cylinders will be replaced with silver boxes, like in the show. 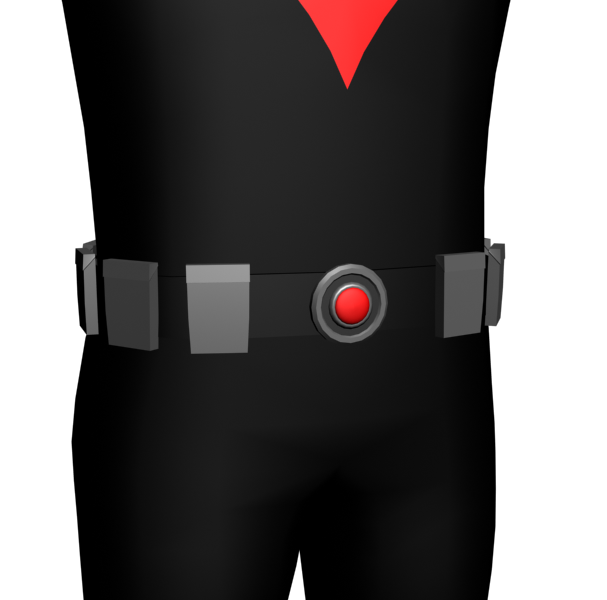 The holster and leg pouch. The holster will have an extra mag pouch attached to the front. The leg pouch will be good for carrying stuff at cons. 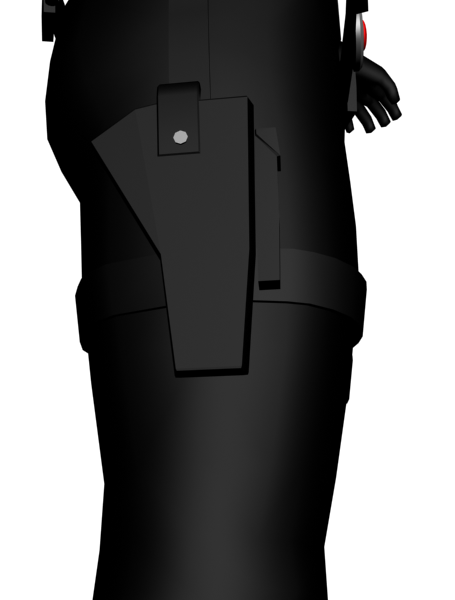 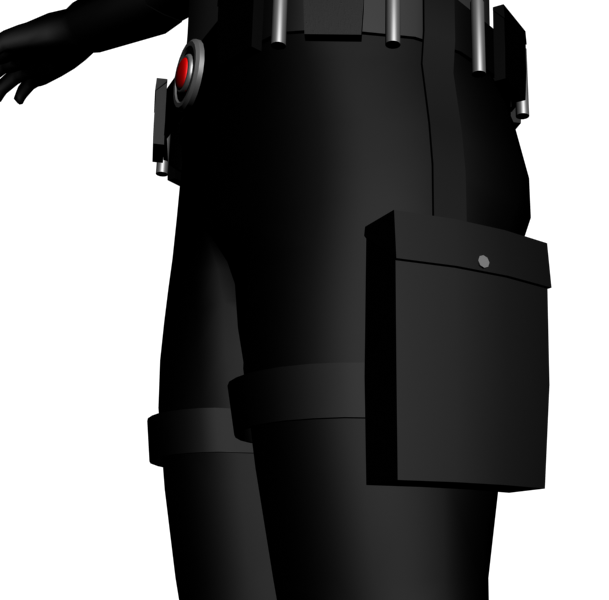 The straps you see here are what will connect the armor plates. I'll use velcro for friction to stop them from slipping (metal armor), and the straps will hold it steady. This only shows small stips, but almost all of them will be connected in one big harness. The ribs hold the breast plate, stomach, and lower back; there's a strap that leads ip and over the shoulder/collar that helps to hold the collar piece and upper chest piece on either side, plus an extra strap for just the collar armor to make it more secure, and strap leading off from the first strap for the shoulder bells (not shown); one small strap that's between the top point of the stomach plate and the bottom middle of the chest plate. 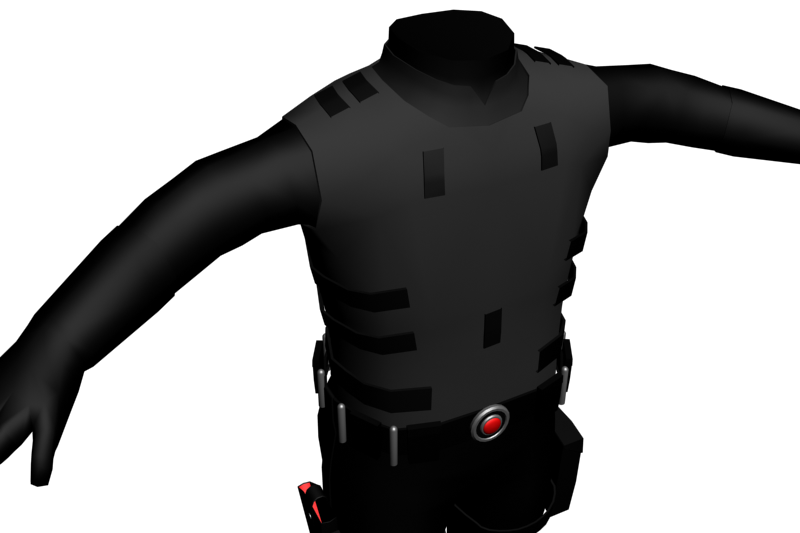 Lastly, 4 mag pouches, similar to the on on the sholder, will be attached to either side of the rib straps. Mando Rule: "Never enter a fight without a gun and lots of ammo." ;D 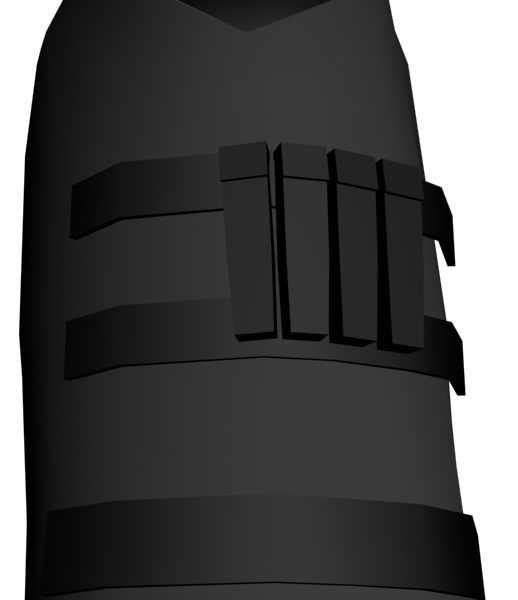 That's pretty much it. The gloves and boots I'm still looking for. I'll probably just use normal neoprene gloves, and riding boots, or something. I do want to make the normal batsuit at least a bit more realistic than the cartoon. for the classic fins (besides on the armor's gauntlets), I'm going to make some simple gauntlets with the two large fins like in the show. I'll also probably put some pieceson to show the top-side small batarang launcher, and bottom-side large batarang storage/ejection port.
So, what do you all think? I hope you understood everything. Please forgive any typos, as it's just past 2:30 am ;D
T

OK here now. Deciding to get bored with another project, here's my helmet idea. I wanted to keep up with the wraith/ghost appearence, so I opted for the scouttrooper looking helmet. I also found the same style used on the Predator helmet, the old and new cylon bots, and various other SW helmets. It seems to be a reaccuring theme in sci-fi. I do plan on protruding the "mouth" area like the Scout Trooper's, to see what it looks like. It's still a WIP, so don't be suprised at any pinching you see.
Some early shots: 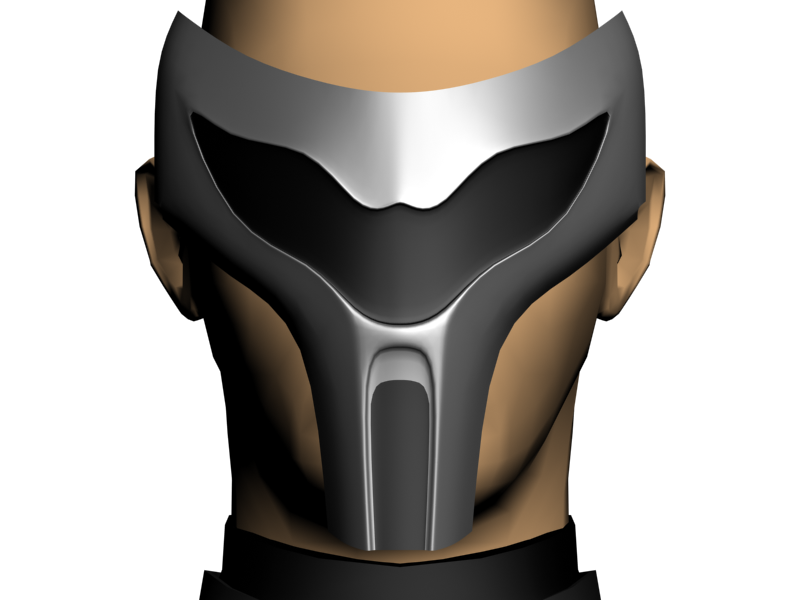 Twenty minutes later. I'm just playing around with the cheeks for now. I'm thinking of having them flow into the "mouth" instead of having a sharp/rounded edge like this: 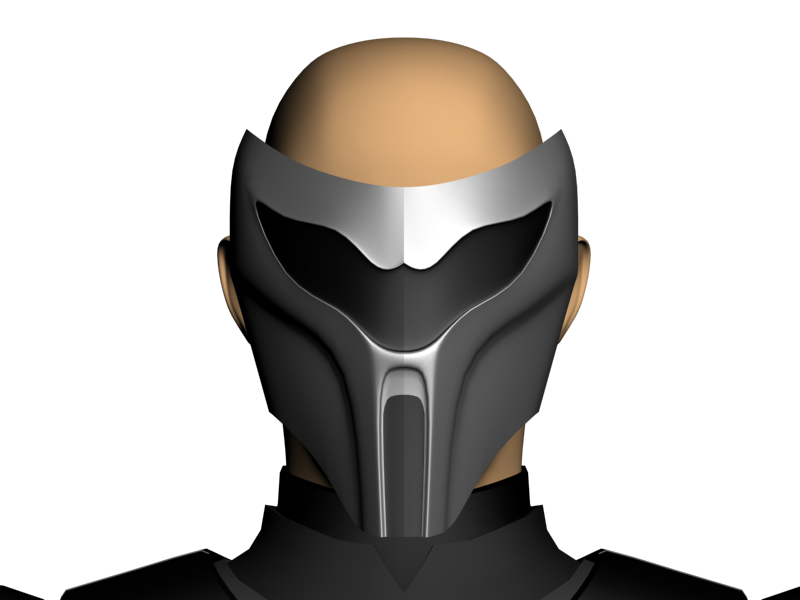 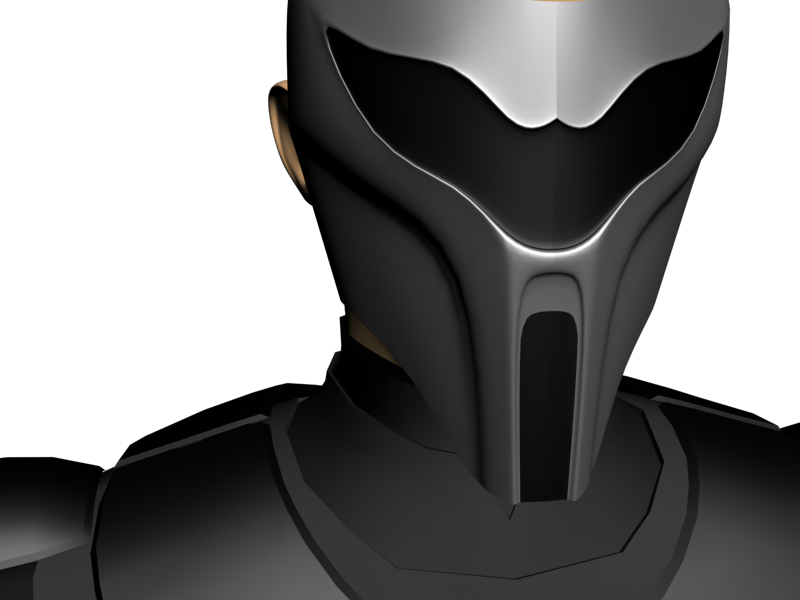 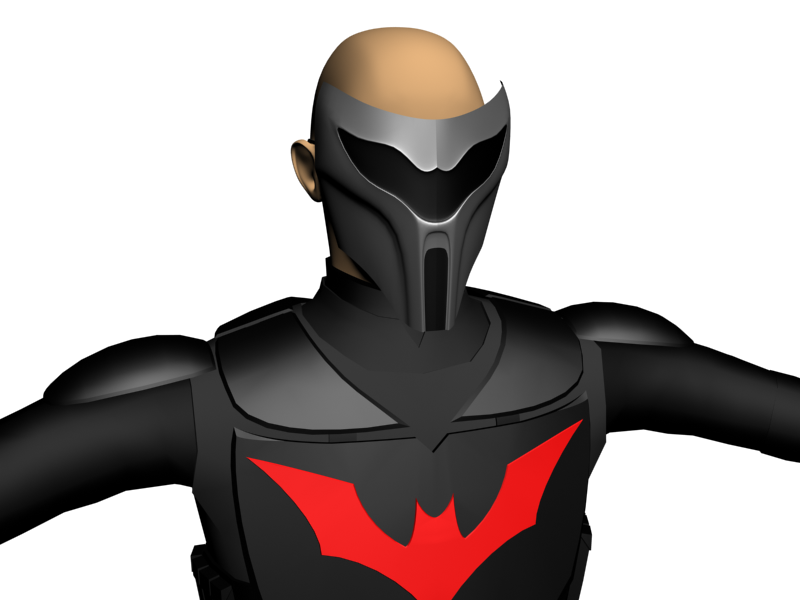 nice concepts, the mask kind of reminds me of the "New Goblin" from Spider-Man 3.
T

Ya, a friend pointed that out to me, I'm not pleased. but I sitll ahve a ways to go. I'm gonna sharpen up some corners on the visor, and possibly widen out the mouth area.
T

OK, got some ears going and reworked a previous version of the helmet that's just the front, and sharpened up the corners of the visor a bit to get am ore "batty" look.

Here's it is with small medium and large ears. The large ears match the cartoon series, but I thoguht I'd test out different lengths. 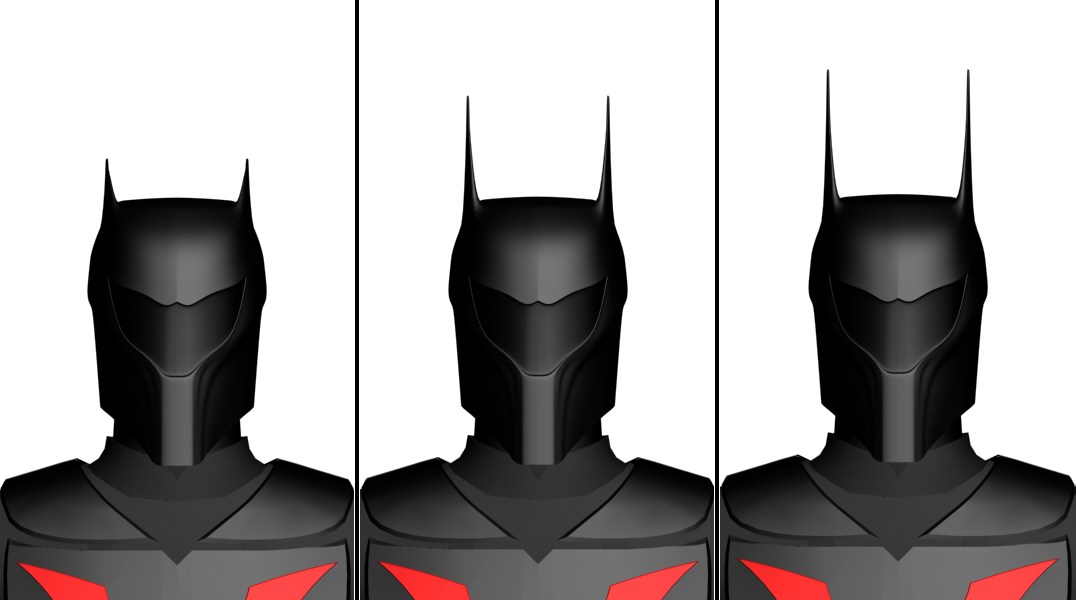 These small, swept back ears were inspired by a Batman Beyond motorcycle figurine. 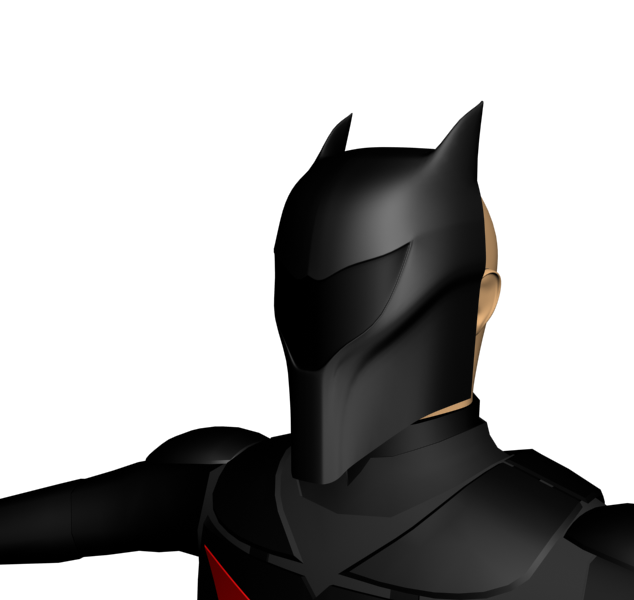 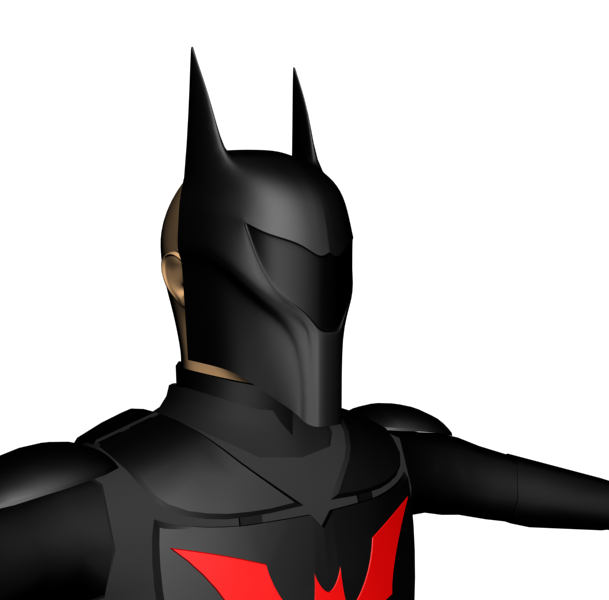 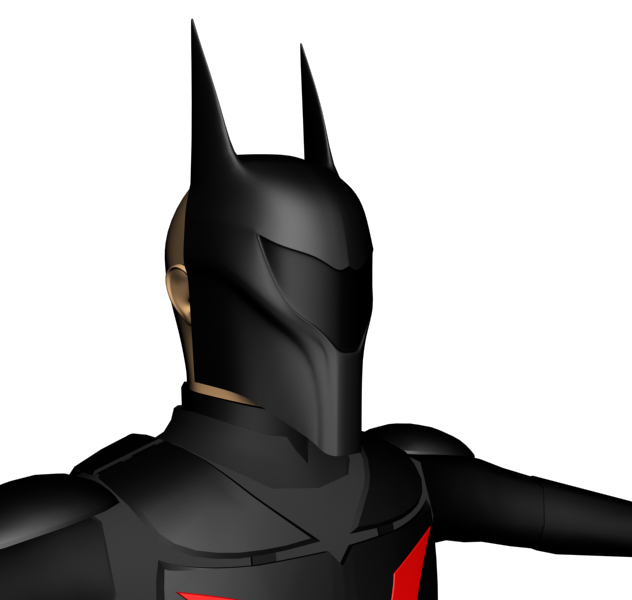 Ok, so I worked up the ears to where I think I want them, and I'm now playing around with different visor shapes. The one I have been using reminds me too much of power rangers....

Here's one that's a bit more mando-esque. Don't know if I'll use it for bamtan, but it is an idea for a later mando design. I put silver back on so you can see the detail better: 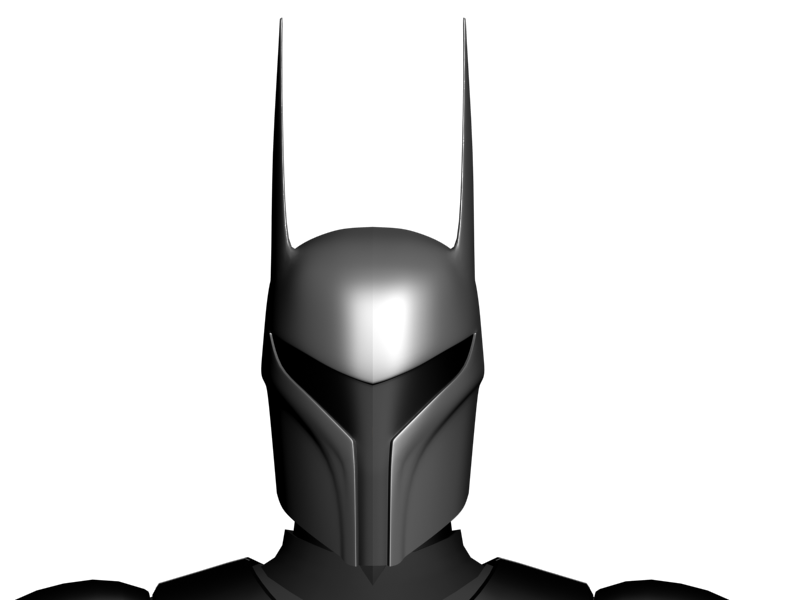 I like the medium length ears the most, I think they look best. Your visual graphics are amazing, I hope the finished product looks as good!
T

Ok, this bucket is really shaping up now. I'm adding some finer details. Hope Wickedbeard isn't getting to scared ;D

Made the ears shorter, and worked on reshaping them a bit to better match the show's cowl, but I made the width way to small. I've gone with the heart shaped visor, but after looking at some previous versions, I'm going to revise that later. I've also added the rear of the helmet, sharpend up some edges, and a teaser to waht I'm working on next with it. My thought is to keep it a face plate, but have the fornt part flip up like the scout trooper bucket.

I still have a few other detials I'm going to add, but they won't be to major, besides the visor of course. Oh, and I'm going with a white or silver visor, to better match the classic "white eyes" of the cartoon. If I go white, I'll have to use the samething that the Halo buckets use. If it comes in white, that is. 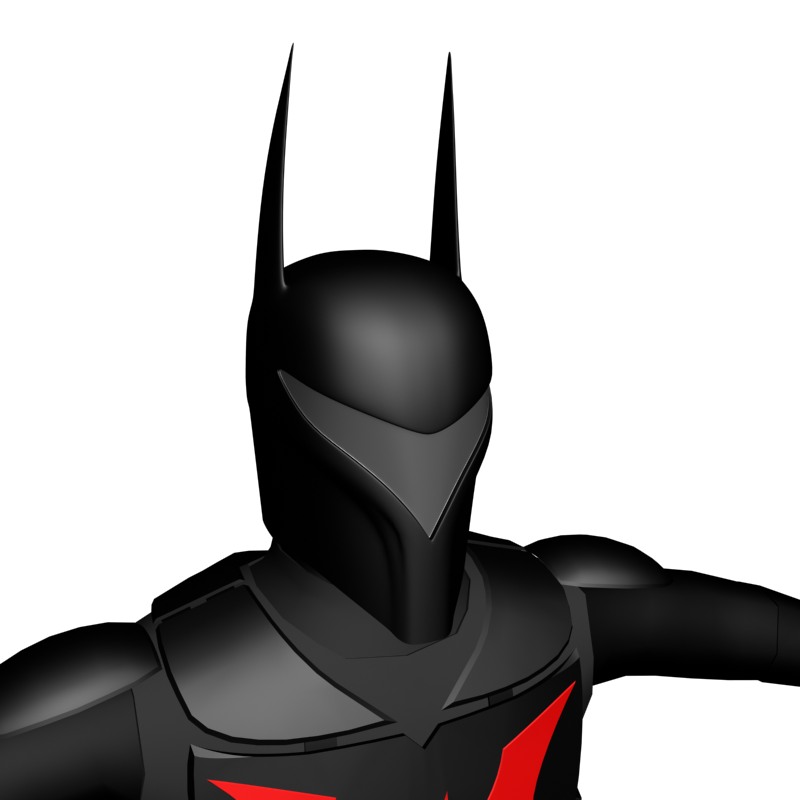 You have some great skills bro... can't wait till this starts production!
Last edited by a moderator: Jul 25, 2017
T

Thanks. It might be a while, seeing as I'm broke from paying college tuition and bridge, and all around surviving. but I think I have some material around the house to build the rifle and some of the soft parts. Need to find time between work and school though.
T

OK, got some lab time today, so I wokred on the pistol. Stylized similar to the tranq rifle, and even has the same barrel. This way it's a stun gun and a tranq pistol. I wanted to keep it simple like the rifle, and like the cartoon style, and I think it's achieving that. I'm still going to add a few more bits, but not much. but I am going to have it have a real magazine in the grip. 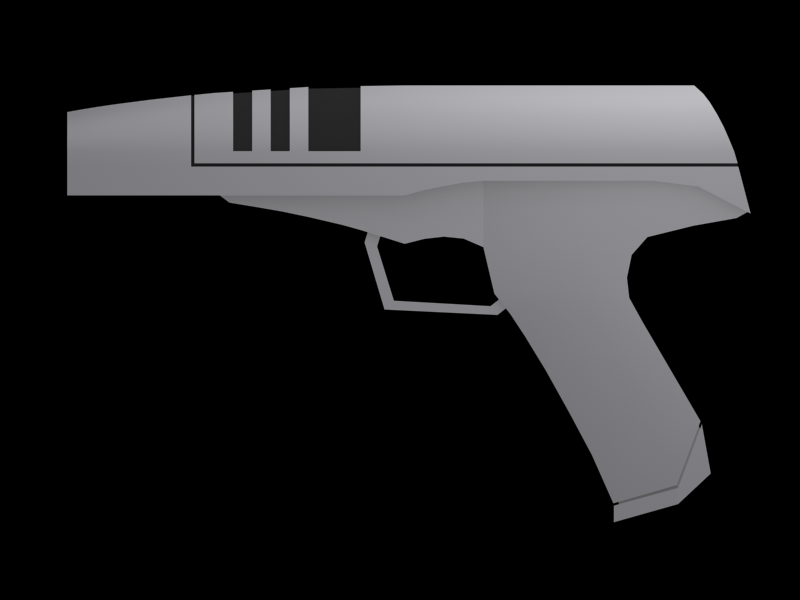 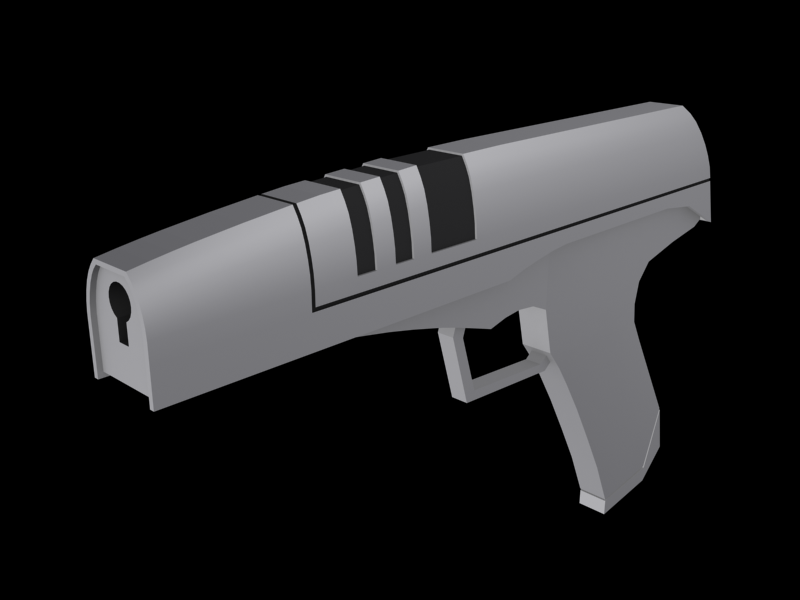 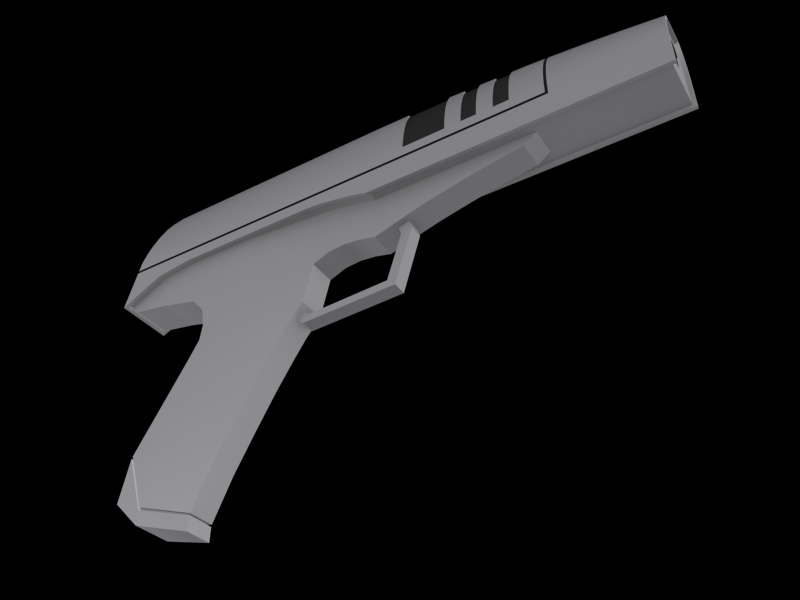 Your project looks awesome!!! I am new to the Dented Helmet family and thought I was the only one doing a "Bat-Mando". Here is a pic of my newly painted bucket. How feel you?