I was getting ready to paint my guants and armor. I am going to primer everything first to get a good base to work from that the paint will stick to well.

my questions is for the silver/chrome first layer.

I'm doing the ESB version.
Do you want the shiny chrome finish as the base? or is silver better.

Once I get the chrome painted I will liquid mask the scratched areas and paint the Panzer green on the guants.

The Armor green for the ESB version I ma still a little confused on. But it seems that it is the same as the ROTJ armor. But, if anyone knows exactly all the better.

I am going to put the dents on the armor than primer everthing. Hopefully this weekend but maybe not until Monday night during football.

I bought a small bottle of tester silver paint from the modeling section of wal-mart and sponged/brushed my weathering on. Since Boba Fett's armor underneath is a metal finsh a chrome paint isnt needed. although rub 'n buff is what was used in the film to weather the metal parts that show, silver paint looks pretty good.
S

I used an "aluminum" colored paint on mine.

Yeah,yeah, I know mine are ROTJ & you are doing ESB. But i think you can see the color of the "silver"

well, I heard that when you rub&buff it the paint doesn't stick, so I'd rub&buff it after you paint it.

That is correct, 1138, you don't paint over Rub-n-Buff. It is a wax, so paint will just wipe off of it. It is better used on Jango armor since it just stays silver.

As for what color to use, I too recommend not using chrome. As mentioned, Boba's dents, dings, and scratches aren't shiney, but rather a plain metal finish. I used Rustoleum Aluminum. The more coats, the better, and make sure you let each coat dry thoroughly before applying the next one.

As for the definative ESB armor green color, I don't have a personal recommendation. Rustoleum Spruce Green 7737 has always been a popular choice, but I don't think it is quite dark enough even after weathering.

Thanks for the info.

I was worried about useing the rub and buff because of it being a wax paint. How about the panzer green on the armor? Isn't it to light also?

I will gray primer the guants then get the silver paint for base coat. then apply the Green, with some liquimask on the weathered areas. and scrathe it off and make other scrathces here and there where it is supposed to be. then go with darker greys, yellows, etc.

more info is all ways a plus

My gauntlets, I didn't layer. They just don't look like they are chipped like the armor. I painted my base coat of green, then brushed the silver on and dabbed on black to weather them.

Well, got all the guant parts primered. looks pretty cool all gray. will get Green paint and go to town ASAP. and putting together all the rest of the pieces.

I will gray primer the guants then get the silver paint for base coat. then apply the Green, with some liquimask on the weathered areas. and scrathe it off and make other scrathces here and there where it is supposed to be. then go with darker greys, yellows, etc.
Click to expand...

SOunds like a plan man. Thats exactly how I did mine, and I was pleased with the results. For your chest armour, you may want to go with a darker color than the POG. I think there are some folks who have used the POG on the armour with good results, but you will have to mist over it with a pretty dark grey to get the contrast btween the bucket green, and the armour green.
Damian

I am doing my armor now, i am already commited to the color i am using but here is the plan. armor is sintra so i primered with some cheap walmart primer. the silver i used was the chrome ooops well i couldnt find colors in a thread for the ESB armor so i ended up using the testors zinc chromate as the middle color after liquid masking the silver parts off. then i liquid maked the yellowish areas off.
i am at three different areas of the armor , i had to resand the shoulder bells but when i get all pieces with the zinc chromate done i will spray 1 -2 coats of rust-oleum spruce green satin followed by a coat of testers medium green in a rattle can.
I am not real happy with this armor, i will use it for halloween then sell it most likely, i have a MLC knees and jet pack coming anytime now so i figure later i will just
upgrade to the full MLC armor.
does anyone know if this is the right color of yellow i used for the armor (inbetween color) and what is the correct color for the ESB knees, i have polly scale E/L yellow for shoulders, is this the same color for the knees 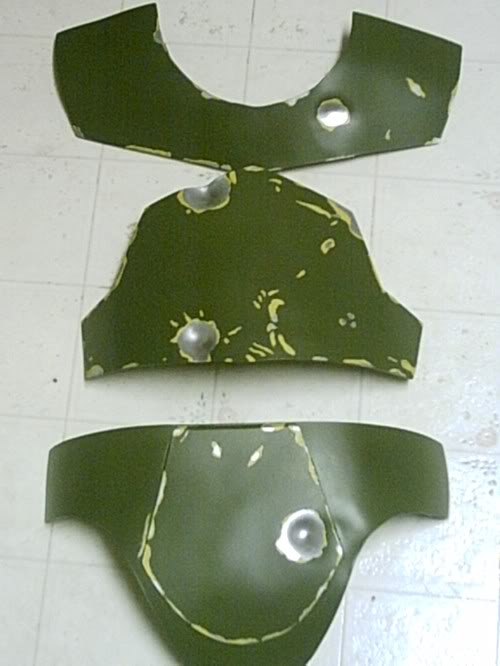 the knee and shoulders are best done in Rustoleum old catepillar Yellow. I can get a bottle for 4.99 plus shipping.

there is a product called Alcad that is sold a model supply stores. it is a great metal paint and comes in a variety of metal shades and is what I'm planning to use as my base coat. It does require some skill to apply correctly but provides the best metal-like surface I think you can get from a paint.

What is MLC and how are their jet packs. I've been thinking about getting the golden armor jet pack any thoughts.