Ok, I thought it would be a good idea to archive what's accurate for some Dented Varients that arn't Jango, Boba, Jaster, or Jodo since everyone knows what's accurate for them. Mandos like Kal Skirata, Walon Vau, Ghez Hokan, ect. I know those are all from the RC novels, but then again I don't know to many other mandos as much as them. Also, working out Cade Skywalker's armor/costume set up since it's more than likely that he's had a run in with some Mandos, it's possible that he is a mando, though that's a whole nother conversation for another thread Bardon Jusik would be part of that as well).

This also goes for their equipment. We may not have pictures, but we got the books and we can ask Karren if I can't figure it out.

In Triple Zero, Kal's helmet is supposed to have a crimson trim with 3-4 claw marks across the front of the helmet. I've been rereading the two novels, and I'll get the pagen umber and quote posted once I get home later tonight. Sand gold I think is the color.

In Hard Contact, I can't remember what Ghez Hokan had.

In Triple Zero, Walon Vau had black and red armor, with black being the main color.

Cade Skywalker has: custom Mando chest/back armor with trousers and long shin guards that are similar to Vader's, however the shoes are different. The gun belt seems to be similar to Solo's, but the holster made for the Rawk Chopped special I'm guessing.
I know there's a thread about Cade's armor, but I'm talking about what the total accurate costume looks like, regardless of the comic consistency epidemic, so that others may try their hand making it, with a single source of information, instead of it all strewn about. The same goes for the aforementioned and unmentioned mandos.
Last edited by a moderator: Jan 4, 2007
A

I'd like to know what Goran Beviin looks like, mostly for my want to see what Mandalorian Crush Gauntlets actually are in appearance.
S

Cade has a Jedi style utility belt, though it's evolved in style as the Jedi have evolved. It has the distinctive Wide strip/narrow strip construction. I'll post pics of mine in the Cade thread at the end of the week. Cade also wears a second belt to which his holster is attached. In many versions, it appears to have to rows of holes running the length of the belt.

Cade's sash and wrist wraps appear to be made of the same red fabric. It looks shiny to me, so I have used shiny fabric for mine.

Cade is seen in a couple different pairs of pants. His first "grown up" appearance in issue 2 shows him wearing Vader style pants. Later on Vendaxa, he is seen wearing black (probably leather) pants, though without the Vaderish corrugation.

I believe one of the two Star Wars Insider magazine issues concerning Mandalorians shows a artists rendering of a pair of crush gauntlets. I also read somewhere that Darth Vaders gloves were supposedly Mando Crush gauntlets but who know there...

arctroopomega5 said:
I'd like to know what Goran Beviin looks like, mostly for my want to see what Mandalorian Crush Gauntlets actually are in appearance.
Click to expand...

I just read that Hokan wore grey armour with red trim.
Also, it says he was former Death Watch, so his helm would look different than a Boba/Jango style helm. 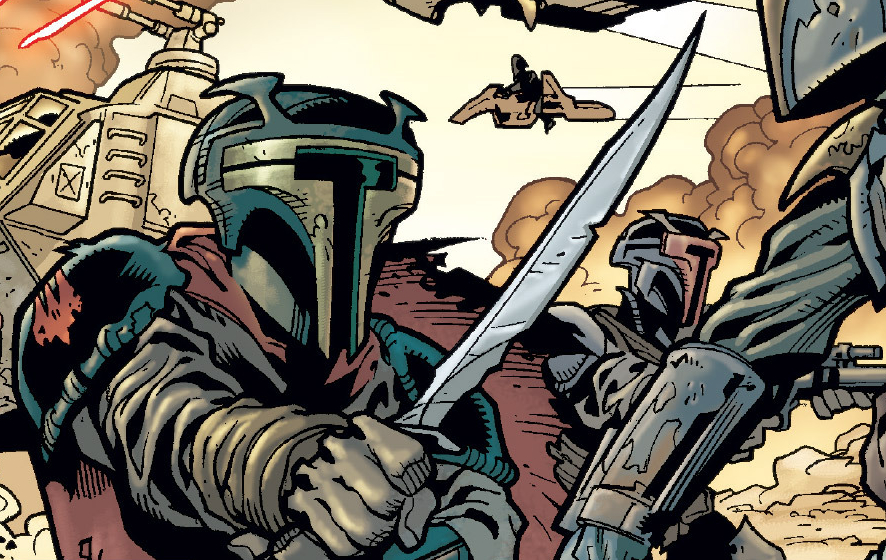 Note the 'wings' and the bold T

Kal Skirata's armor is sand gold (metallic), with a jet-black (probably satin finish) visor trim, and red sigils on the helmet. No claw marks, from what I can find, and I've been making extremely detailed notes on all of them.

I'll check on Ghez Hokan's armor when I get home, but I think it was red with grey trim, not the other way around. He also had a red jacket that he wore sometimes, and a lightsaber.

Walon Vau's armor was all black, including the bodysuit. No red on it, no matter how kickass it might look. Someone in Bloodfin Garrison did an awesome Vau, according to Karen.

Bardan Jusik's armor is more or less a forest green color. Check it out here. It's got Karen's approval, too. Page six has finished pics, and a copy of Karen's e-mail.

Those are all the EU Mandalorians we know of for whom we have no visual reference but at least a decent amount of written reference, but if I think of any others, I'll let you guys know.
S

ghez did NOT wear a death watch helmet...i remember someone asking karen and she said he DOESNT wear that buy'ce

and kal DEFFINITELY has 3 claw marks on his bucket...and as far as i can tell they are in the smase place as mine on my bucket!
S

Ceric Neesh said:
Bardan Jusik's armor is more or less a forest green color. Check it out here. It's got Karen's approval, too. Page six has finished pics, and a copy of Karen's e-mail.
Click to expand...

Where is that, the one done on here recently?
S

I made the Jusik armour. 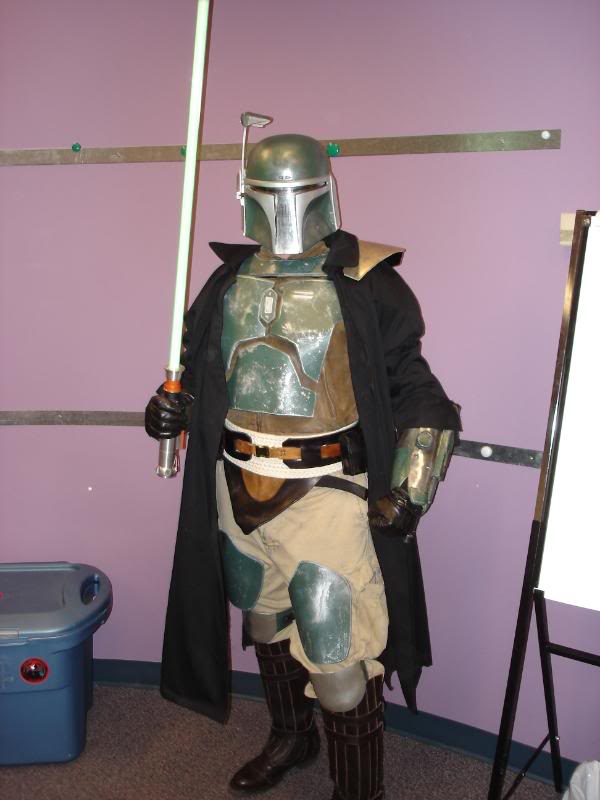 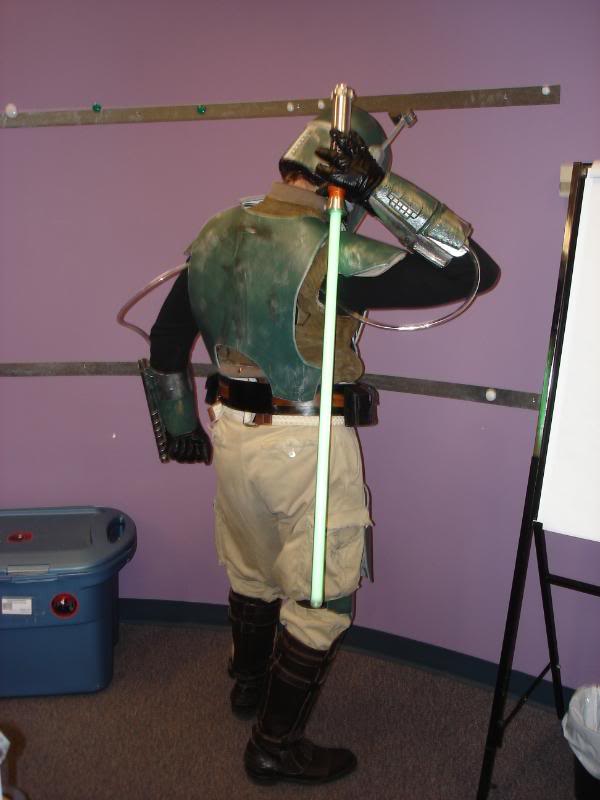 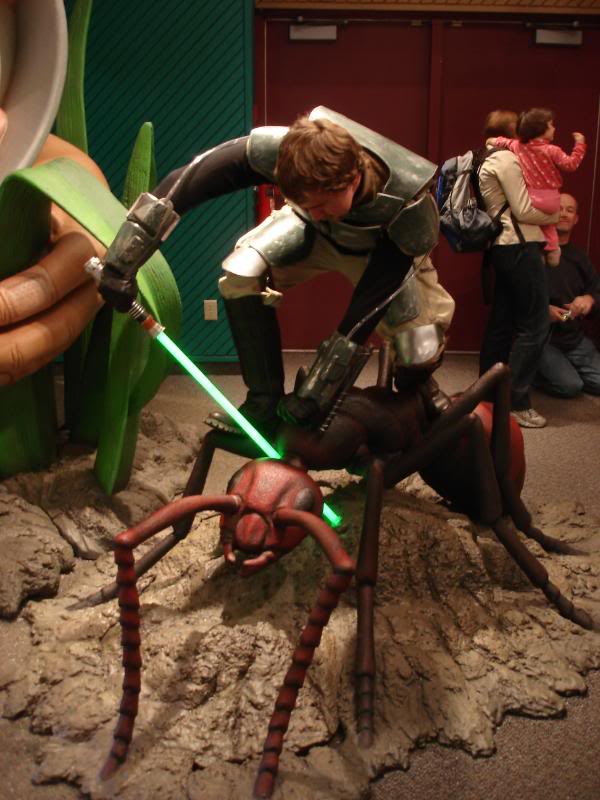 Karen's email said that the look I achieved was close enough to her vision of Bardan. Before my next troop in it I have a couple of small changes I'd like to make. I need to raise my thigh plates up a bit, they seem to hang too low. I also would like to make a different pauldron for the coat. It's originally my Cade Skywalker trenchcoat, and I just threw it on because the writing called for Bardan to have a jacket. So I think I'll make an interchangeable pauldron of silver or green for Bardan. I'd also like to ditch my leather codpiece as it keeps flipping outwards. I may make one out of sintra, or go with something more like tabbards or a frontal kama.

Love the last pic there buddy, keep it up!
I

The Clayster said:
Love the last pic there buddy, keep it up!
Click to expand...

It's actually at my local kids' Science Center. They have an area with some giant bugs and plants. Here's my buddy Peter in his custom shooting down a bee. 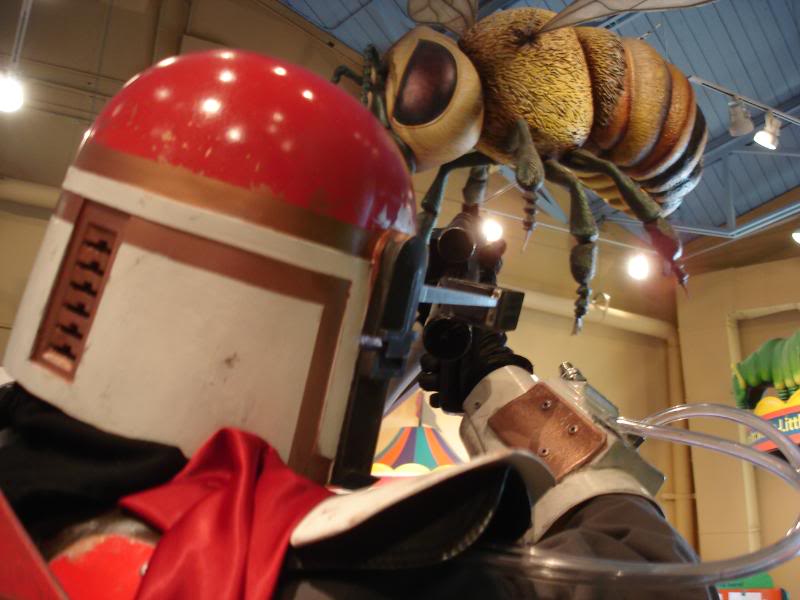 I'm planing on Starting Ghez Hokan when I'm 100% happy with vau. I keep toying with the gauntlets but I can't them where I want them, and I don't want to use boba or jango gauntlets due to the price and that everyone uses them. Vau needs something fresh.

tb2849 said:
I'm planing on Starting Ghez Hokan when I'm 100% happy with vau. I keep toying with the gauntlets but I can't them where I want them, and I don't want to use boba or jango gauntlets due to the price and that everyone uses them. Vau needs something fresh.

Variate the patterns. Just because the WOF patterns are basic doesn't mean you can't variate them to serve your needs. I think the reason why so many people use those patterns is because they are accessible plus you can turn them into basically anything you want.
T

I understand, I'm just looking to do something over the top from scratch that would fit Vau.
R

There are a couple of internet images of Mirta Gev and Ghes Orade, but nothing as far as a full costume. That would be interesting to see their armor broken down.

As for "EU Accurate Mandos, I think you guys should also throw into the equation Montross, and not to mention, the standard Mando grunt's you see in the open seasons series..
M

tb2849 said:
I'm planing on Starting Ghez Hokan when I'm 100% happy with vau. I keep toying with the gauntlets but I can't them where I want them, and I don't want to use boba or jango gauntlets due to the price and that everyone uses them. Vau needs something fresh.


What paint did you use for the trim on that helmet?

B
Boba Fett Shadows of the Empire Helmet

B
Boba Fett Shadows of the Empire Helmet