3rd times a charm: yet another ESB build with lots of scratching'! 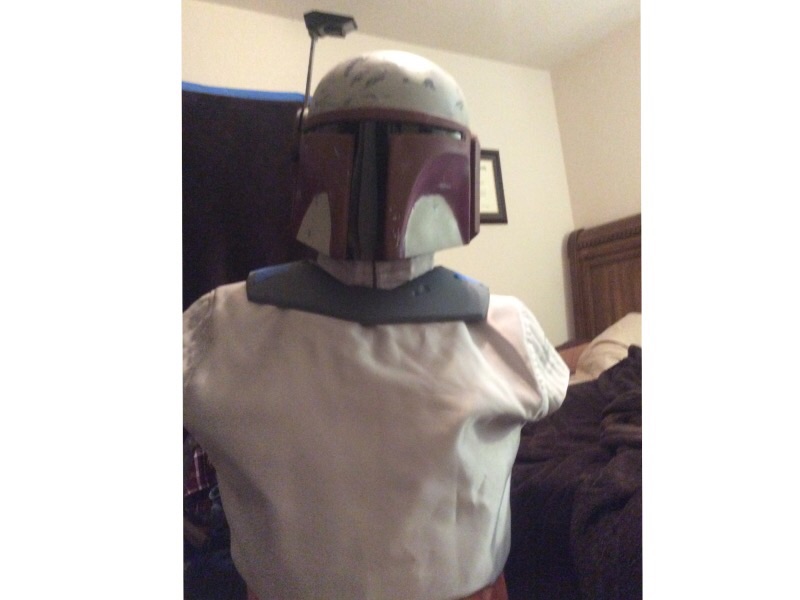 Been a while since I've updated. A very generous member (Cyberpyrot) GAVE me a mannequin. I wanted one to help place armor, wookie braids, etc. not to mention when it's all done a cool place to keep my costume. I just threw my vest on to double check my collar and back plate. (I've yet to drill my holes for the studs) I'm glad I did.
There are a few bad apples on this forum, but most of the guys on here are top notch.
I hope everyone has a great week.
Update, got my collar studs drill, screws epoxied in and chicagos epoxied in on my back plate.
Last edited by a moderator: Aug 17, 2016

One of the things I have always liked on the costume is the ammo belt. Being from small town East Texas, I grew up around saddle makers and boot makers and the like. I always like the idea of leather working, but I never really knew how to go about getting into it. I had a friend of mine who built saddles give me a belt to work on the ammo belt with, but it, like other aspects of the project, it died by the way side.
Enter Main St. today. I've been making belts, holsters, knife sheaths and all kinds of other stuff out of leather for about 8 or 9 years now. So I knew I'd be making this belt. I started tonight, measured it out around my girth and codpiece, making sure the ammo belt was a little higher. I tipped the ends, made my stitch lines, used my chisel to punch some starter holes for my awl and punched my grommet holes. Then I dyed it and decided it was time for some ice cream! This is one of those items of the costume that means a lot to me, and is a favorite stop along my journey to completion. 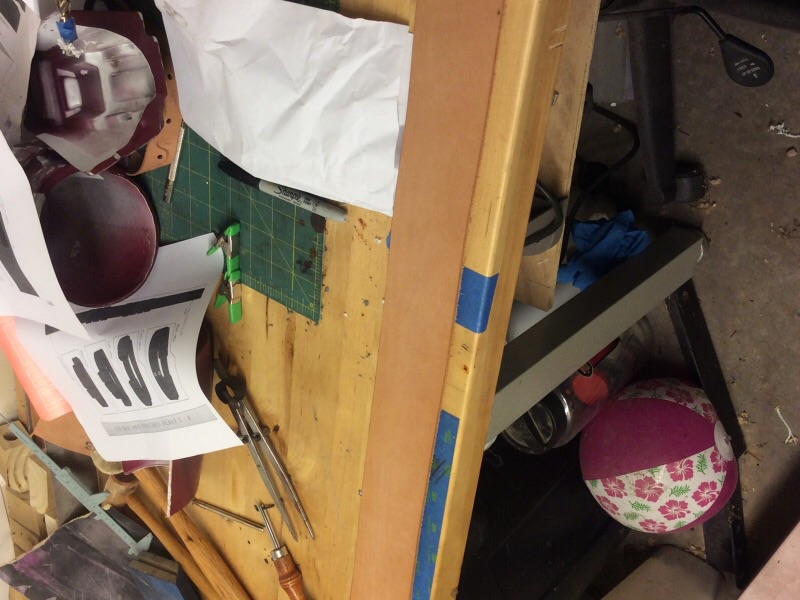 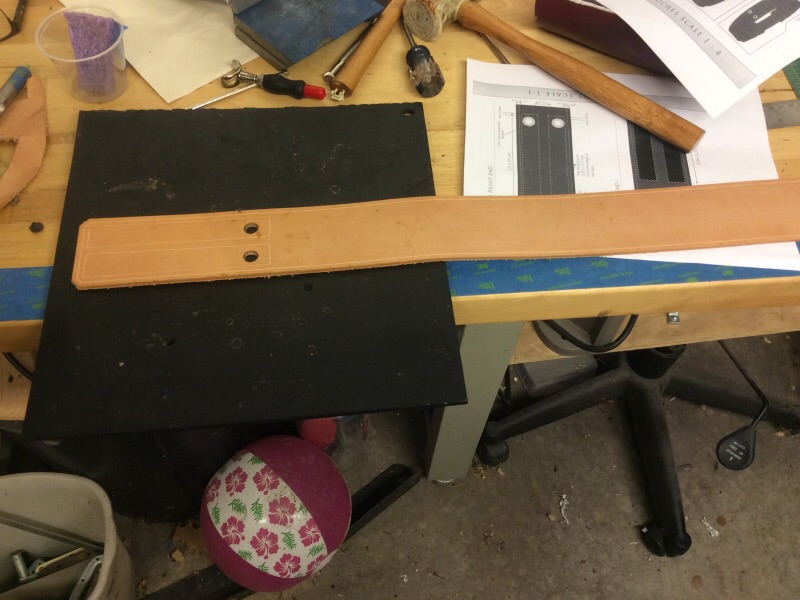 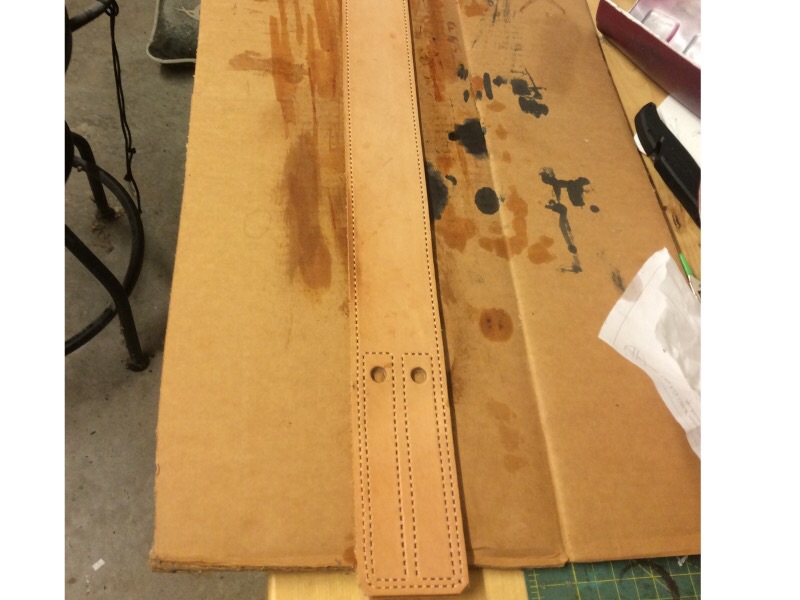 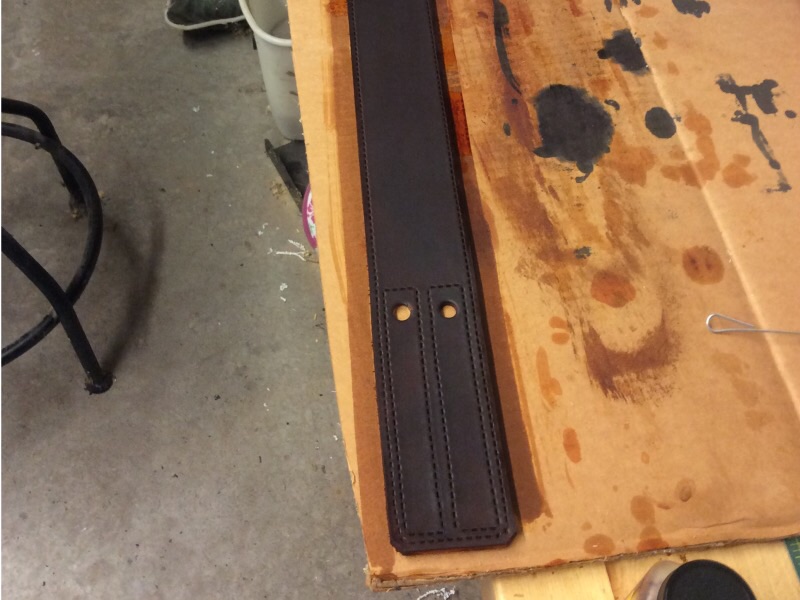 mainst69 said:
One of the things I have always liked on the costume is the ammo belt.
Click to expand...

Looking awesome! I wish I had your skills; my maiden voyage leather crafting (a dagger sheath) is functional, but in no way professional-looking. One of the things I am unhappy about with my build is the ammo belt. Mine looks fine, very accurate, but the containers are leather wrapped around wood blocks and don't open. I've thought about hitting up Dakota, but I know the extra space in his stitching would drive me crazy (OK, crazier). Since I have dabbled a bit, I know the high level of skill required for such craftsmanship, and I salute you sir!

Thanks guys! I'm not sure how my stitching will look, it won't be screen accurate because it'll be saddle stitched by hand leather as oppossed to sewing machine sewn. Sewing machine stitching dits more on top of the leather a bit more unlis there is a stitch groove cut in. I put a very shallow one in just to keep my stitch hole chisel oriented. My pouches will be the wood block variety as well. I'm approaching my build with the attitude of "it's a costume". I realize functional pouches saves weight, but I used pine and drilled holes in the bottom to help reduce it a bit! Plus, I think the weight might help it "hang" or sit better on the costume. 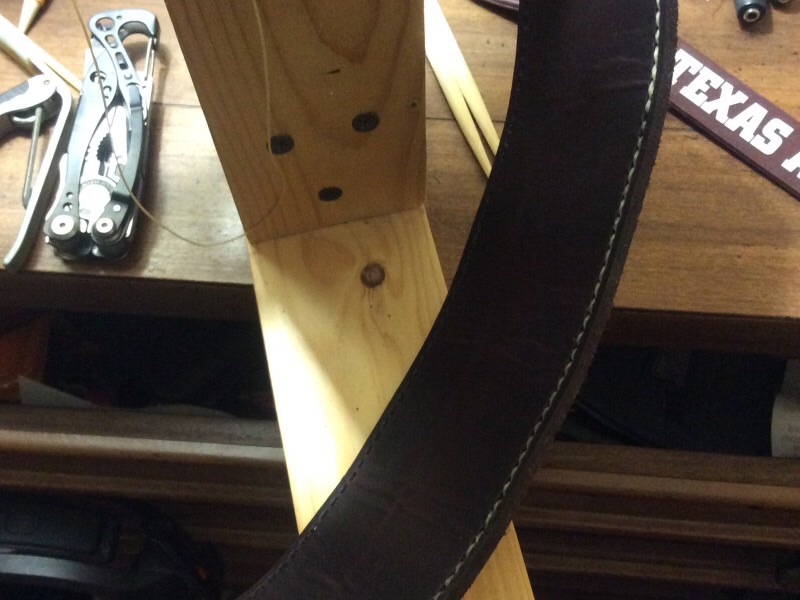 Almost half way done on stitching the main belt. I actually got to paint on my bucket today, but then it started raining again, so I got out the stitching pony and went to work. It's coming along faster than I figured. Gotta go buy some velcro and then it will be done and then on to the pouches.

The ammo belt looks great so far. Also, congratulations for having enough bravery to do it by yourself. Keep it up.
S

I'm just loving this build. I can't help but keep staring at this pic too. Makes me want to dump my armour build and jump into making a blaster right now
Wonderful skill mainst69
Last edited by a moderator: Jul 23, 2017

steoconnor said:
I'm just loving this build. I can't help but keep staring at this pic too. Makes me want to dump my armour build and jump into making a blaster right now
Wonderful skill @mainst69
Click to expand...

thanks man, that EE-3 was fun to build. Cyberpyrot has offered to help me build a aluminum D bracket for it. I'd really like to do that as the kydex one is flimsy.
Overall I like how it turned out.

OK, so, once when I was in (band camp lol) college, I went to a party over at a friends house. I had just previously started repainting a Don Post vinyl job trying to do something a little nicer than what came on it. This was back in 1999 or 2000 or so. Anyway, at the friends house was a Boba Fett costume on a mannequin. Ever since then, I've always wanted to do the same thing. I just never knew how to go about getting a mannequin! LOL. Low and behold, our own Cyberpyrot 16 -17 yrs later gives me one. Then, the next odd thing is that I kinda got the OK to put the completed costume on the mannequin in the house! Not in the garage, not in the attic, but right by the table inside the house!!! Go figure. I thought I'd have to do like some massive home improvement, or some honey do's or something. Nope! So, this is the mannequin, we've been having the most fun with it.
Thanks Mark! 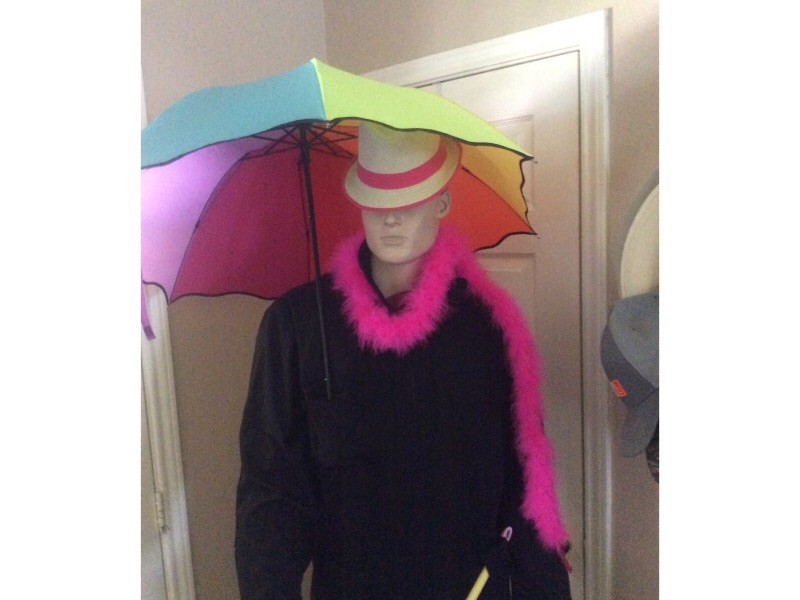 Got blocks covered, strips cut, stitch lines in, stitch holes chiseled, two button holes punched, and everything dyed. Then after we got back from riding go-carts and eating pizza, I put some leather dressing on the pieces (the dye is alcohol and dries everything out) to moisten them up before I stitch them up. I still have the main belt to finish, I'm over half done on the stitching on it. I still have to install the velcro and grommets. I ran out of tan dye on the pouches, so I used some medium brown to help darken it up. I think I like it pretty good, and when it gets broken in and weathered I think it will look great! 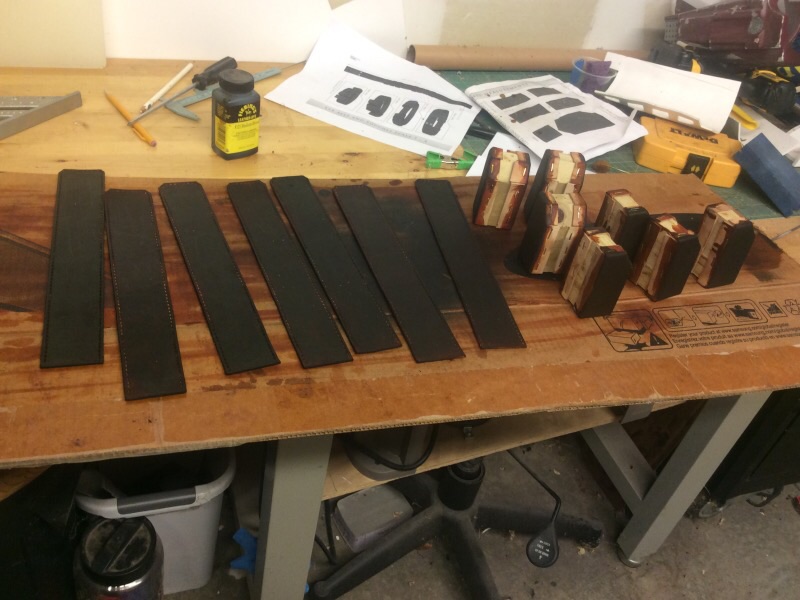 OH, and I got my back piece and collar primed and ready for paint. 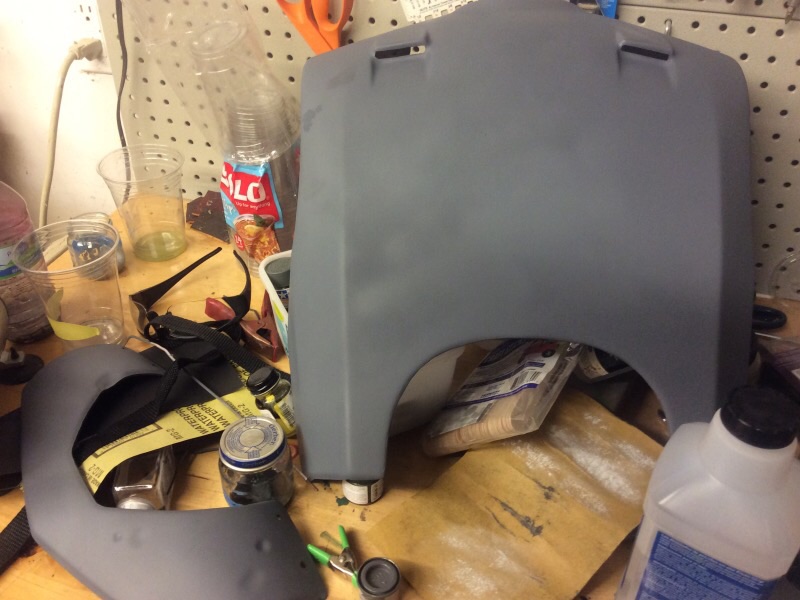 Saddle stitching the last pouch flap. I need to pick up some velcro, install it and grommets and then I'm done. Well, besides weathering it.

I tried to embed this video, but it didn't work for some reason
Last edited by a moderator: Aug 27, 2016

OK, got the pouches finished. I got them molded to the blocks, stitching finished, snaps installed, interior velcro (I'm gonna put a strip of velcro on the interior of the main belt so that the spacing will stay put for the pouches, sort of like a police duty belt). 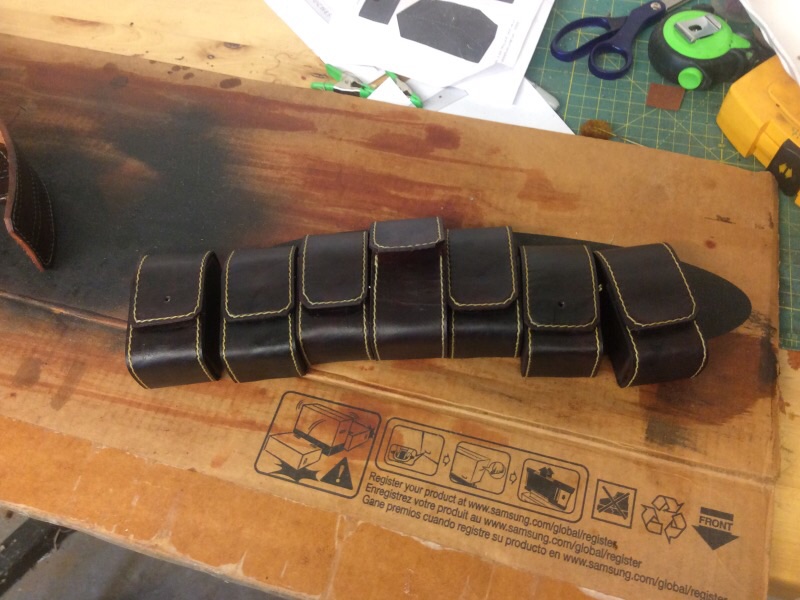 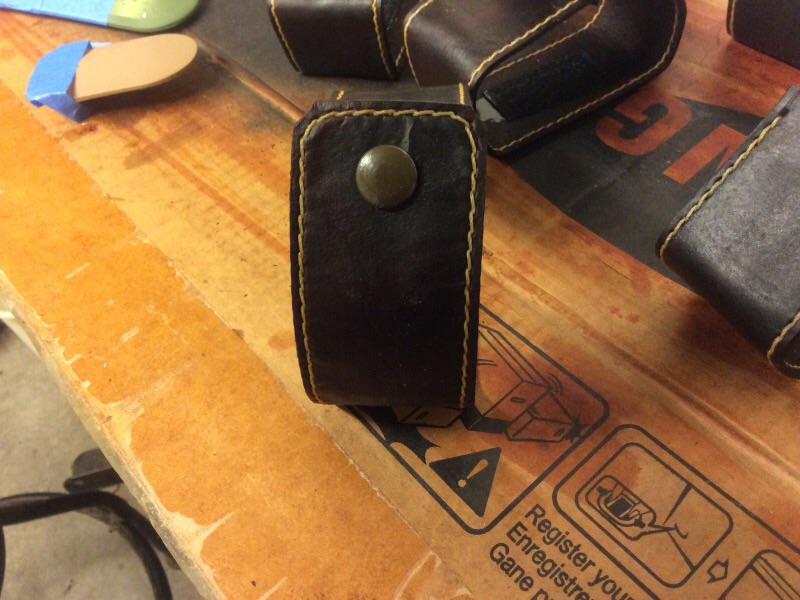 Went to the salvage yard and picked up some free seatbelts for my harness.

In keeping with my ethos of it's not just about the destination, but about the journey, I discovered that my grommets were not "long" enough to go all the way through the leather I was using. I don't know if they were designed for canvas or what, but no wormy here. Other than that and some weathering, I am done with the ammo belt. 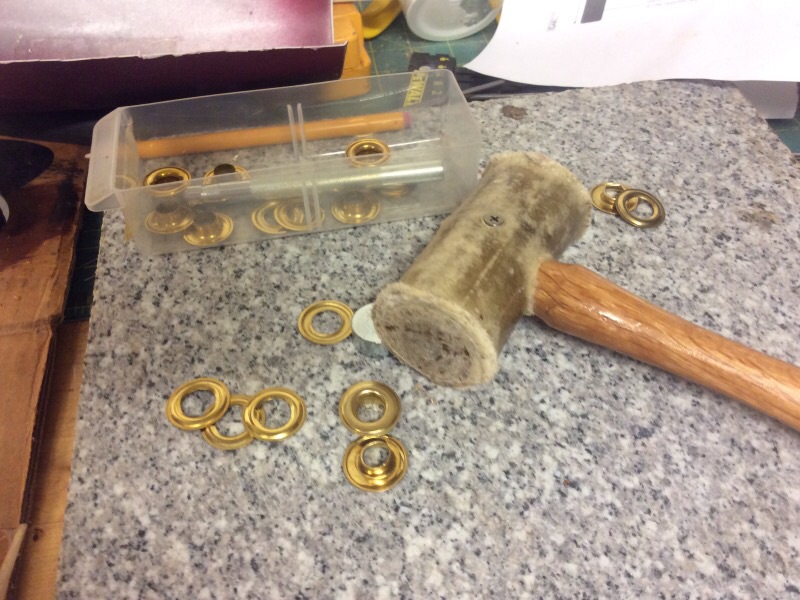 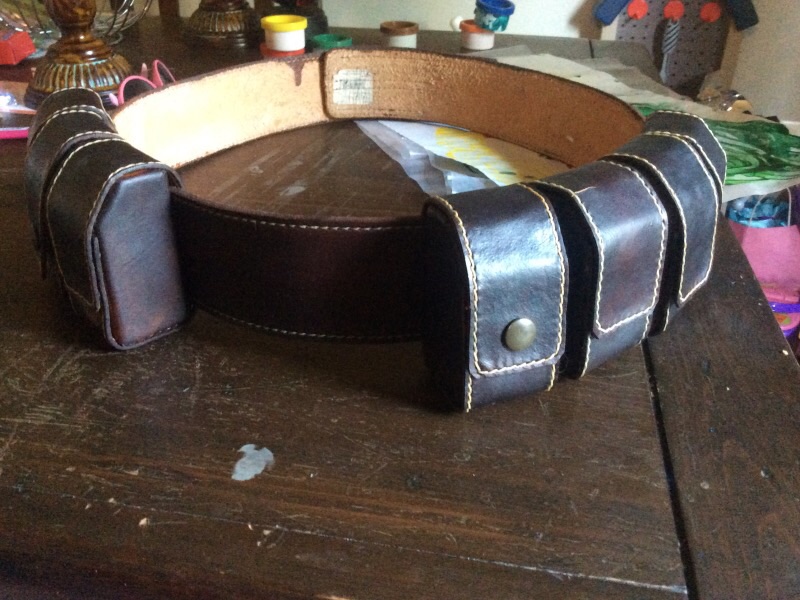 I also started my fiberglassing experiment with my gaunts. 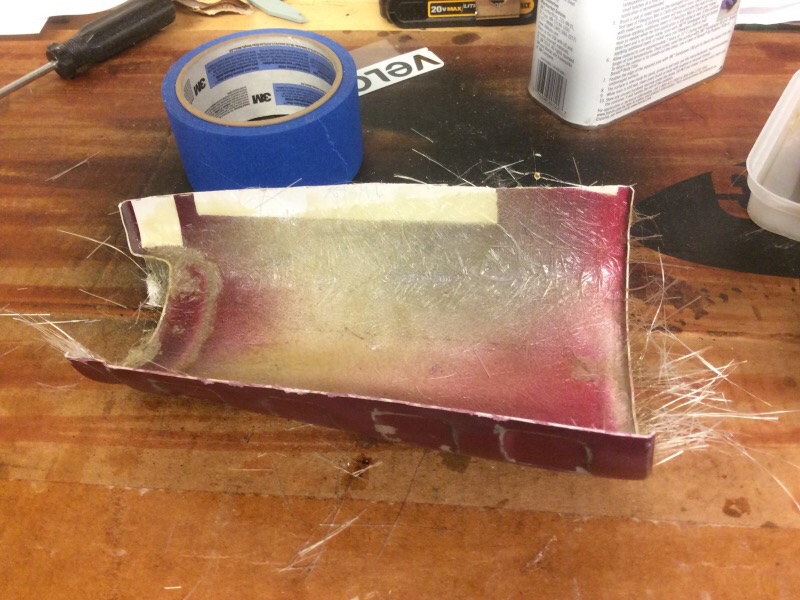 Hope all is well with my Fett Brothers!

PS my conduit that I was making my JP harness out of collapsed while I was bending it. I had put sand in there, but apparently there was some rust on the inside that prevented my getting it packed all the way. OH well, the conduit was laying around the house for the past 7 years, so no big loss.

Continued on with fiberglassing my gauntlets. Got another layer on the first half, and initial layers on the new ones. 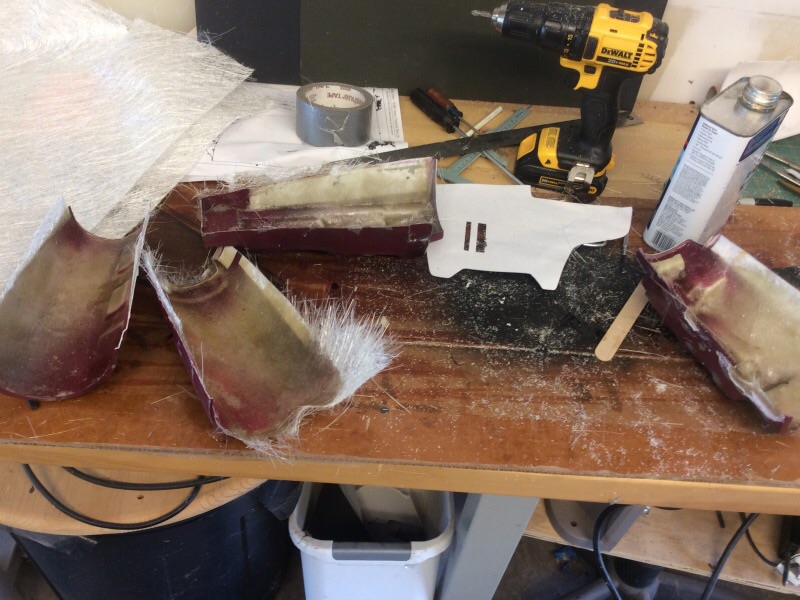 After cutting out Sintra on the band saw, I would make a template by taping the armor template on cardboard, tracing the shape on the plastic and then cutting it out on the band saw.
Well, I had an epiphany and just used Elmers Glue to glue the cut out template on my Sintra. I also use two pieces when cutting out the shape, at least for the shoulders and the chest. I super glue them together when cutting them out. I glue outside the cutlines then I just hold it tight when I make the last cut. I then peel the paper off and wash the Elmer's Glue off in the sink. Worked great! Way easier than tracing/cutting/sanding etc.
Got my holes cut in the chest piece for the lights. 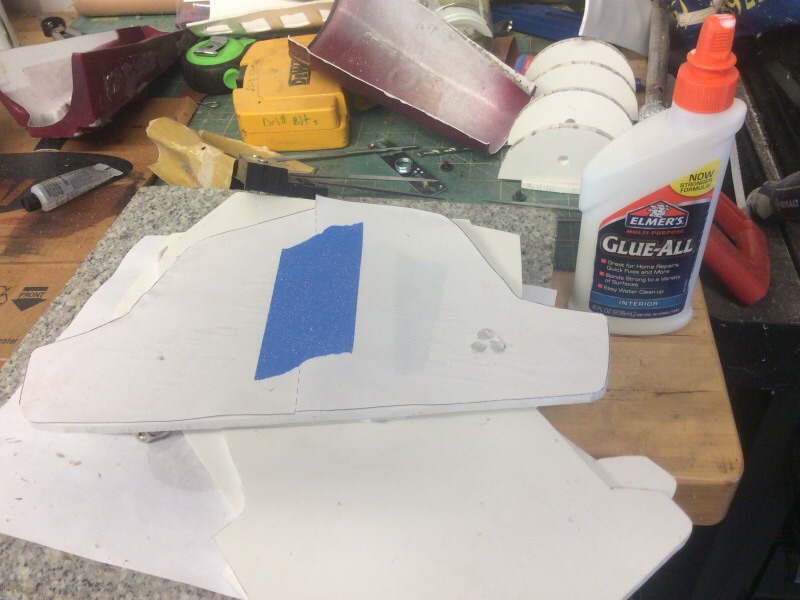 Then got my heat sources ready to do some molding on the armor. 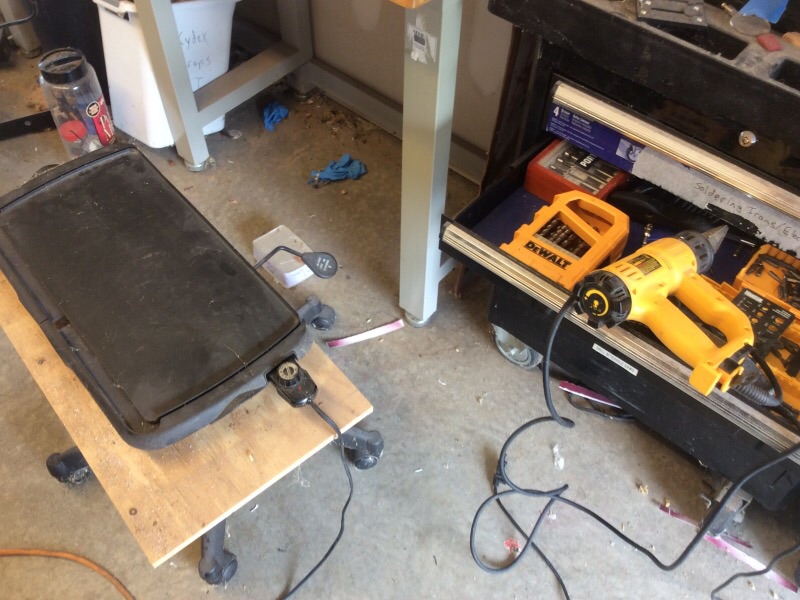 I'll take some more pics of the armor after my daughter goes to bed. But I got all the armor molded, damaged, and primed. Actually, the primer might not work, I ran out of the stuff I normally used on plastic. So I may have to sand and then re prime. Which is fine with me, because the Sintra has a bit of an orange peel texture to it that I don't like. 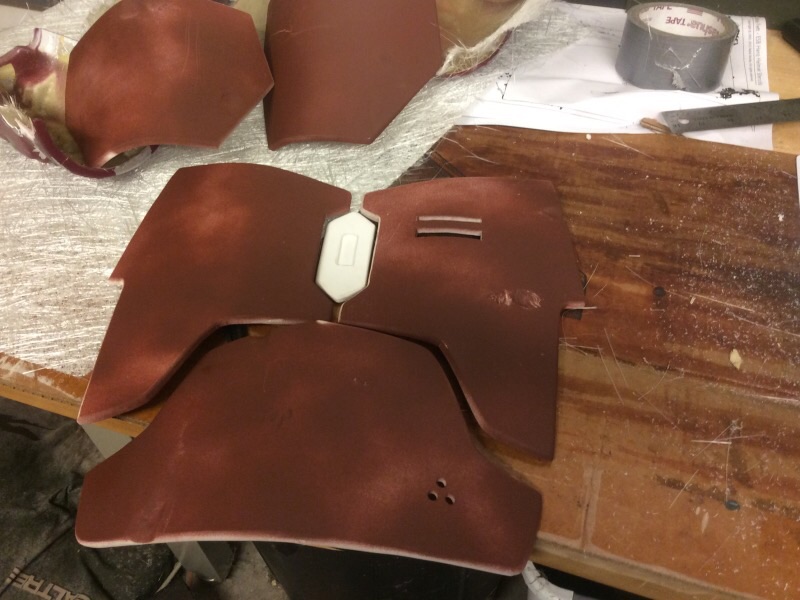 I think my girth belt is probably toast. I'll keep working on it, but it looks like Victory Canter might be getting some more money.. 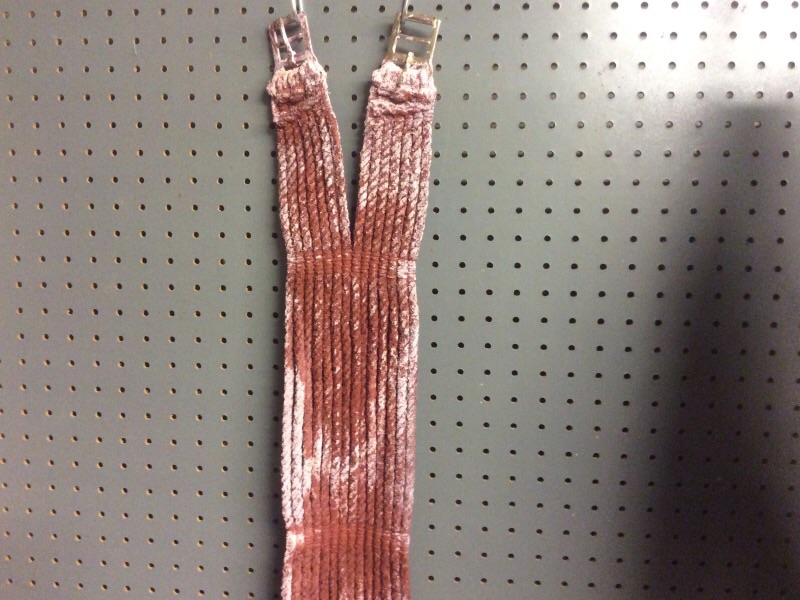 Get some Krylon Georgia Clay spray paint and try a hand at that girth belt. Just to see what you can get out of it. I did one with it and it turned out very workable.

Mullreel said:
Get some Krylon Georgia Clay spray paint and try a hand at that girth belt. Just to see what you can get out of it. I did one with it and it turned out very workable.
Click to expand...

Thanks Mull, it's hard to tell in the pic, but the whitish stuff that looks like undyed rope is actually like a crystallized stripper residue that a pressure washer didn't fix. I ended up chunking the thing. Have to order a new one and try again. I think I'm going to mix a custom acrylic and airbrush it on maybe.

I started on my pack frame. I had some solid aluminum bar stock, and I just thought to myself, I wonder if I can just bend that into the rough shape and use it. It's going to be under my flack vest and back armor anyway. I can redo it later if I feel like this doesn't work. And this way, I haven't spent any more money on it. 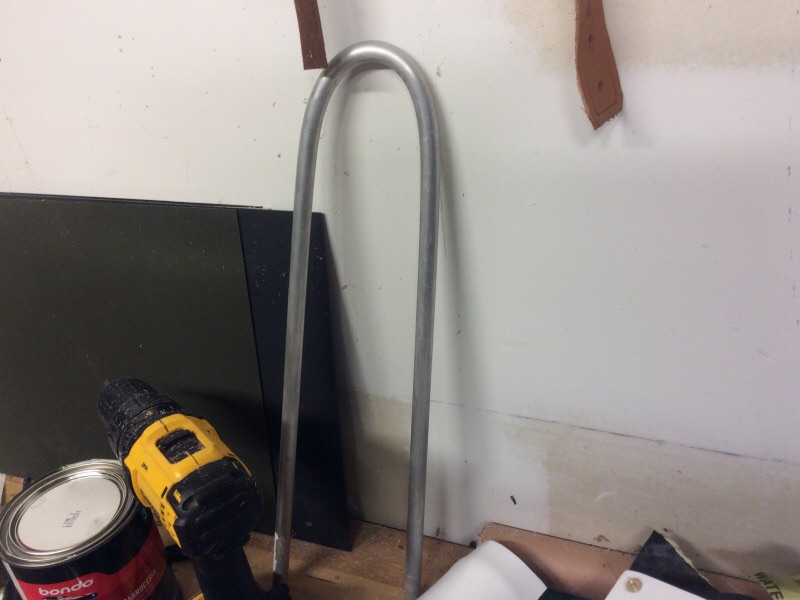 Got my tacks positioned on my armor with super glue. They feel really secure. I wonder if it will be necessary to use epoxy on them or it they'll work like this? 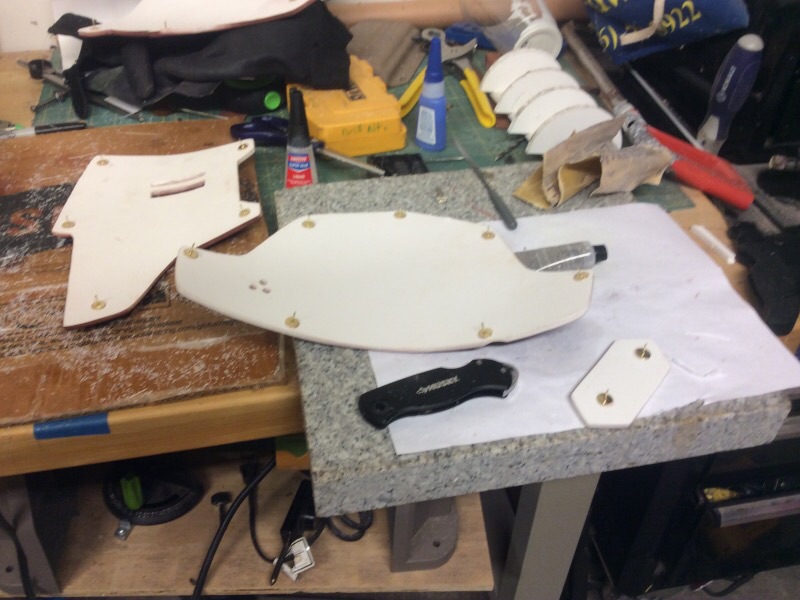 Resumed COD work. I roughed out the raised bumps with sintra, then coated them down with bondo. Oh, and I put the dent in as well. 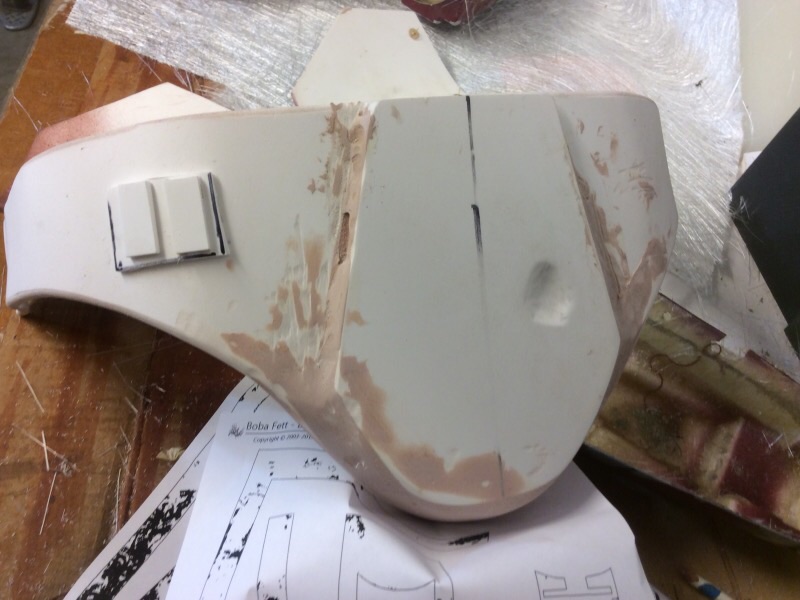 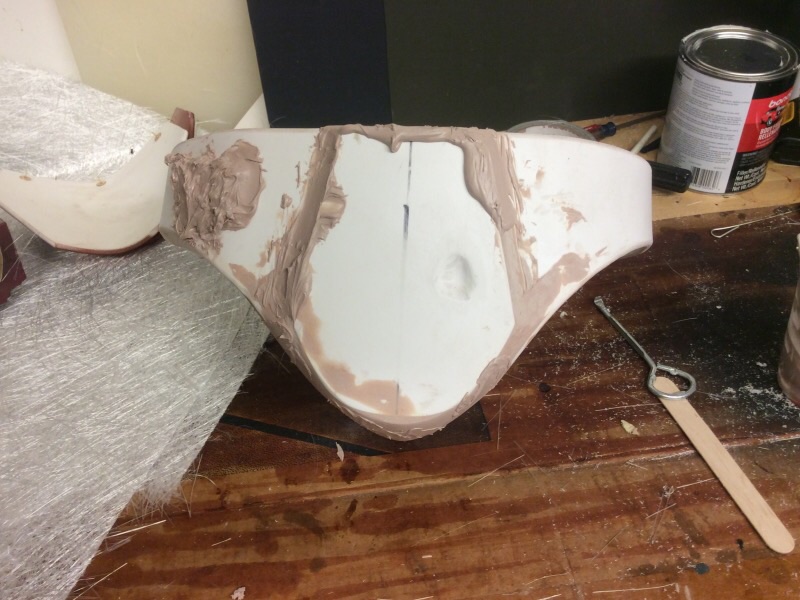 Progress continues. Following in the tradition of Bondo Zen Master ToEleven, today I nearly drowned in my respirator while sanding bondo on my cod! But it's looking better. I also started on the JP. Not much progress, just some sanding and dry fitting of some parts I got from DVH. Thanks Lou! 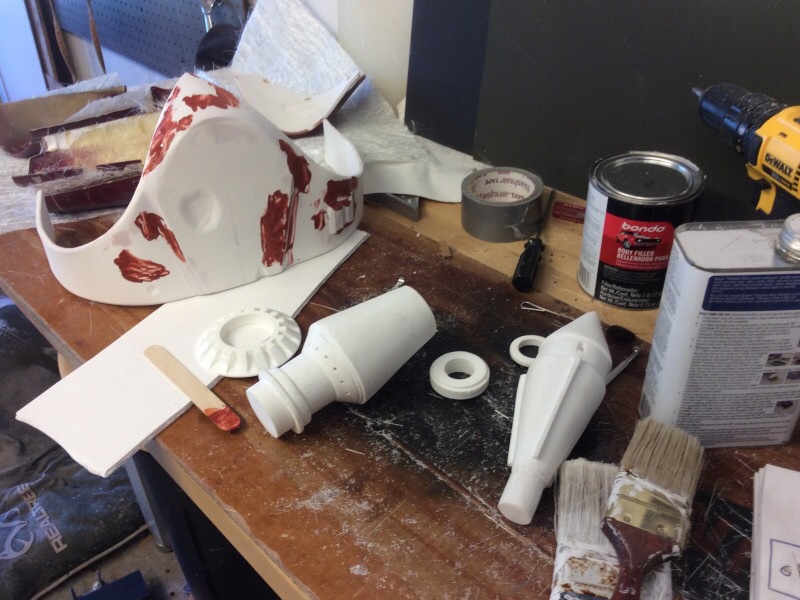 Got my tacks epoxied in as well... 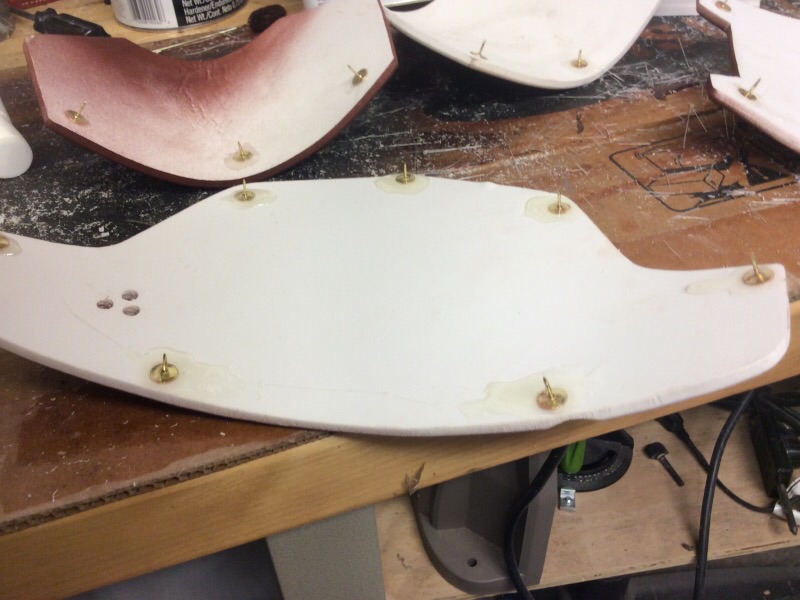