Yeah SFP is a heaping pile of dung. Why is this thread still open? Obviously not everyone is aware and I love being able to warn people away form these jerks as I was one of the ones caught unaware and bought my first Boba from them which looked as such... 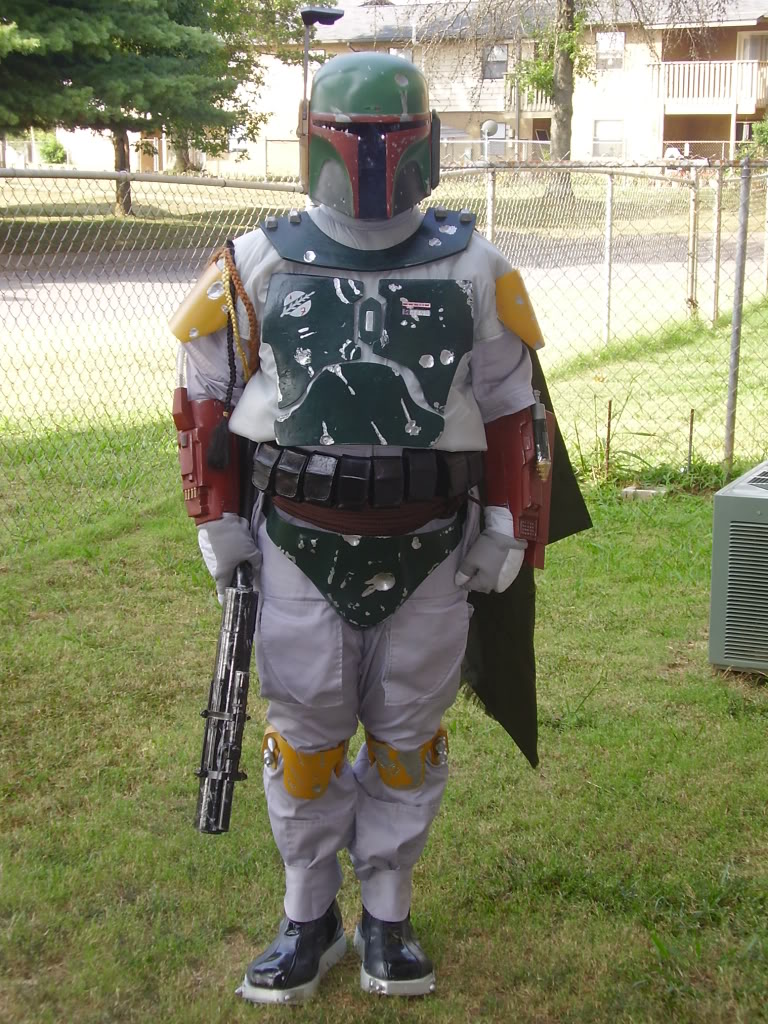 As you can see it's totally wrong in just about every way. I was able to salvage and repaint alotof it and have it just about totally replaced with quality items, but it still cost me $1800 and a lot of time and aggravation. They claimed that the mispainted helmet was one of many ROTJ schemes used in the movies, claimed they couldn't see how the various parts broke since it was packaged securely, and said I could get them replaced if I paid for the shipping to get it back to them and to me again. The entire thing was fiberglass, not at all formable if you're a bit too small/big for a certain part. It took forever to get hold of them and forget about trying to get them to fix/replace their shoddy product.

If you look off to about a 45 degree angle and squint a little that almost resemble Boba Fett.
C

Thanks everyone. You all just saved me thousands of dollars. I was just about to purchase something from these retards. Is there anywhere in the web where I can purchase some clone or Stormtrooper armor???? Anywhere that's Legit?
I'm in the military and when we got the digital camo uniforms approved, tons of websites sold digital camo uniforms. I bought some uniforms from one website because it would have been cheaper than the base clothing store. Plus I would have had to wait a year before I got my digital camies issued to me. The website NEVER mailed me my uniforms so I went to the legal office and pressed charges. I got my money back and uncle sam shut the website down.
I think my friend in the Legal office could do the same to Star Fortress. I'll have to check and see.
If anyone has some complaints or stories about Star Fortess, email me at caberot@yahoo.com
D

Fett 4 Real is selling a great set of clone armor in the Cargo Hold... You wont yet be able to post in there, so just click his name and send him a pm. For a full stormie, I would check out AP.
O

Hi caberot,
you must go to www.clonetroopers.net and www.whitarmor.net. Introduce yourself and read, read and read threads. That's the best way to learn about TK and CT armors

overpriced ****, i have seen what they produce, definitly a no no. waste of effing money.
C

mandosoldier you are a saint my friend. Your sacrifice has saved so many. You saved my @$$ for sure. That boba fett costume doesn't look half bad, but it isn't half good either. I'm sorry you had to go through such pain.
C

Thank you Ogait-Nas. I did check out those websites and there is so much information, I don't know where to start. I'm so ecstatic. Can't wait to get started.
K

I got burned by this jackwad a few years ago too. He'd just moved at that point too and I had no idea why or I'd never have contaced him in the first place.
Save yourself the heartache of a craptastic costume and the financial drain that goes with it...because you know you'll have to replace that junk. Wish I'd read this back in 2004.
A

I've heard alot of bad stuff about StarFortress too. Just personal opinion,I think fiberglass clone armor would be to heavy to troop in.(Thats just me.)
C

Did you know Star Fortress now has Iron Man and Green Goblin Armor available on their website? Is there no end to this!!!?!?!?!?!?!?

I'm not really a costumer I am just some fool who sent Star Fortress Productions about $300 for some Anakin clone wars armor that I thought would be fun to wear for Halloween. I was shocked (since I had no previous knowledge of SPF's reputation) when I received an e-mail from them saying the shipping time for the item was 21 to 28 days. I wrote them back twice to see if I could get expedited shipping and never heard back. After that I got nervous and started googling for info about the company and ended up here.

So my questions are: What are my chances of getting anything from them? The payment was done with PayPal... how long should I wait before opening a dispute?
F

OK, I rarely do this, but seriously. . . are people that greedy for product that even after reading all about this piece of human garbage that the only thing they're worried about is "getting their stuff???" SERIOUSLY??!!??
Shame on you all.
Hartman, cancel your order. Do whatever you need to do to get your money back from Paypal. Don't wait, just demand your money back.
F

i dont think its that simple, brother...if he has no product, and the agreed time frame is not up, he just cant cancel an order with no reason or proof, can he? i totally agree with you, but i dont think you can just file a claim with paypal and demand your money back unless there is something wrong with the order... someone should make a website solely devoted to letting people know about SFP and the like...i would, but have no clue how to...??
R

I think the problem with SFP is that for beginners when you're first starting out the first thing you do is hit google or ebay and type "star wars costume" or whatever. Thats what I did when I first started out and I quite quickly came accross their site. Now I was lucky enough that I saw their prices and that they dont even show pictures of some of the products on their site and decided to keep looking as something seemed dodgy to me from the start. Thats when I stumbled across TDH, whitearmour, Bikerscout.net and the like and read what a scumbag this guy is and how garbage his products are. Lets not be harsh on somebody who's fallen for his act and is concerned about where their stuff is, not everybody checks that whoever they're buying from is a peadophile or not first and as important as it is to raise awareness of how shady this guys background is, people who've bought from him are obviously going to be more concerned for the time being about if they'll ever see their hard earned cash again, which is obviously understandable . Hopefully if enough word gets round then anybody typing Star Fortress Productions in to a search is as likely to come accross a thread like this as his website. So next time noobs READ UP ON BLOODY FORUMS FIRST BEFORE MAKING A PURCHASE!!!!!! haha

Thanks for the suggestions. Boy do I feel stupid! But as ronnyjodes suspected I am just a noob trying to put together a Halloween costume and stumbled across SFP from a web search. I will wait until the 28 days are up and file a dispute with Paypal. If it is of interest to anyone I'd be happy to post my results. Again thanks for the help! It is an impressive community you all have here.
R

Hartman said:
Thanks for the suggestions. Boy do I feel stupid! But as ronnyjodes suspected I am just a noob trying to put together a Halloween costume and stumbled across SFP from a web search. I will wait until the 28 days are up and file a dispute with Paypal. If it is of interest to anyone I'd be happy to post my results. Again thanks for the help! It is an impressive community you all have here.
Click to expand...

Absolutely nothing wrong with being a noob fella, i've been there myself as have everybdoy else on here, and i orginally made the same assumption that everybody does similar products and would be reputable. you find out pretty quickly that its not always the case. at least now you know and you can pass on the information to anybody else who wants to start a build. good look with the payment thing, i for one would like to know how you get on. and dont forget to show us some pictures if you do end up getting your costume sorted, then at least something positive will have come out of this.

Look at my post (#21) that's all SFP straight from the box. Yup I made that mistake as well, BUT it did have some good results. I have learned how to repaint some poop gear and I have met some real quality people and vendors as a result. I now have my fett almost 100% revamped from where it was, and am very happy with the results. I have only like 7 more SFP pieces left and am currently working toward ridding myself of those.
You must log in or register to reply here.
Share:
Facebook Twitter Reddit Pinterest Tumblr WhatsApp Email Link