New member, from a certain point of view

Hey all,
I have been lurking this community for quite sometime and only just now decided to join officially to join in some of the conversations and give some of my opinions.
My name is Topher and I have been a video game developer for 20 years specializing in character work. I teach this trade at a couple colleges in the Toronto area. Every year as part of my course I create a character to help the students keep pace and to demo the varying aspects of the job. This year, I decided to make my first Star Wars character. I always stayed away from the franchise in the past, something I was taught to do when I went to school ages ago. It only just recently occurred to me that I am now good enough to tackle some of these characters that I love and also, do them justice.
Like everyone else, I am loving the Mandalorian and can't wait for each new episode to air. So, I decided Din would be my project this September. A couple months out and I can show some of my progress and also discuss reference. I am attaching two files for your viewing pleasure. The first is the file containing the majority of completed and incomplete meshes used to create the character. The meshes in Dark grey are completed ones. Meshes that have been digitally painted and are game-ready. The lighter grey meshes are incomplete and still require some modelling, some painting, or some other work I haven't been able to complete yet. The second image is what the character mesh currently looks like in the game engine. (This is what you would see in game)

I have been leaning heavily on this community for reference as I create my meshes. From the photos in the Media section to seeing the gorgeous costumes and props the members have built. While I haven't made any costumes myself irl, I feel like I am doing so digitally.
I am currently Plugging away on Mando's blaster sidearm and I have been having a real hard time finding accurate reference. From what I can tell in the images taken from the Disney conference, what we are looking at is a stunt prop in the holster and it's construction is not machined. Maybe 3D printed. I have also found that many of the fan made props and 3D files are really incorrect. The grip is the dead giveaway. The shape of Mando's is highly modified from the Bergmann upon which is was based. Screen shots haven't been much help yet either as he is either holding the prop and thus concealing some of the detail or it is in his holster and even more obscured. I have a close friend working for the production of the show and he is trying to get me some photos, but they are very guarded with their toys as you can imagine.
Anyway, any help from anyone would be greatly appreciated in my endeavor to recreate Din. 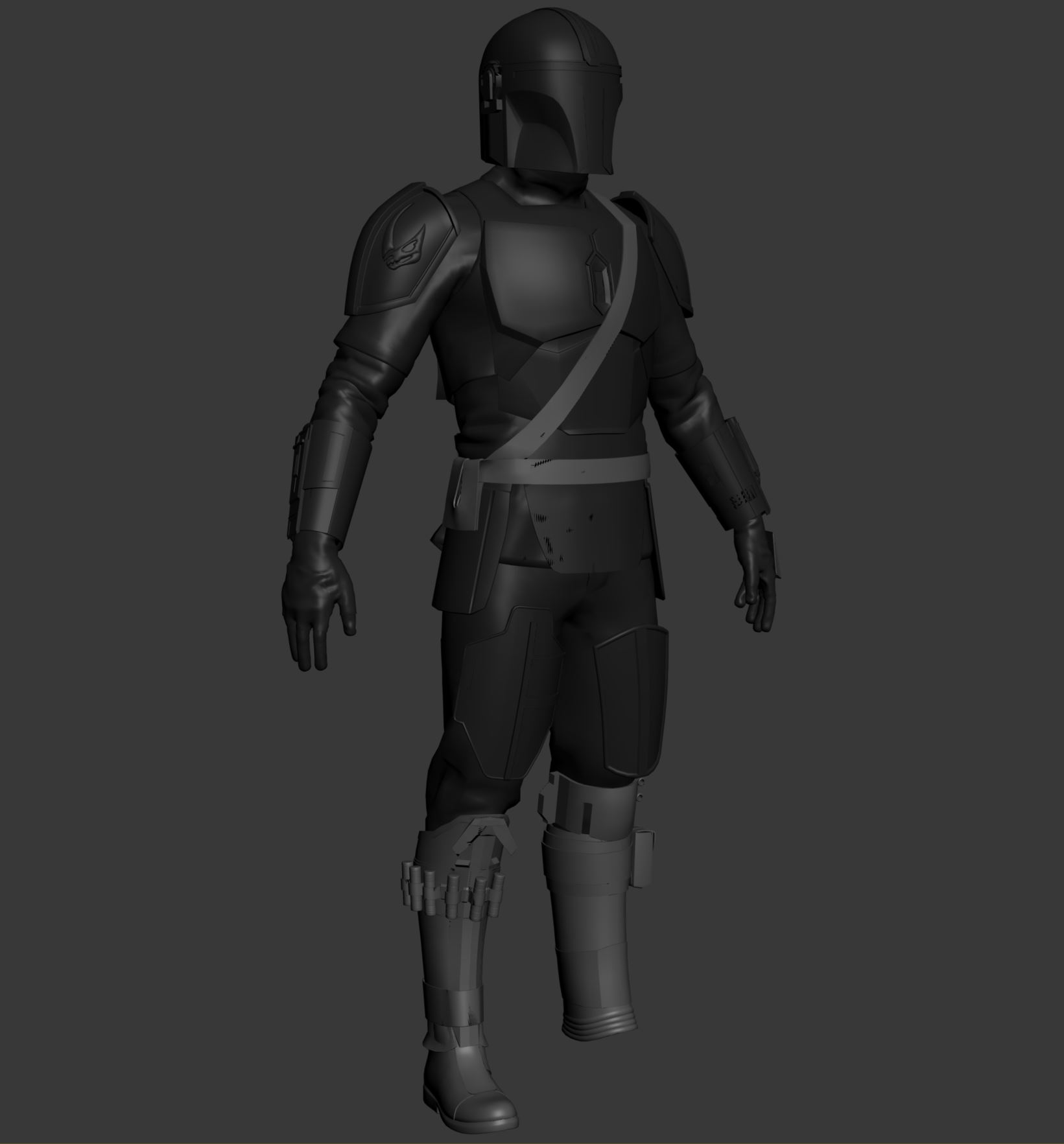 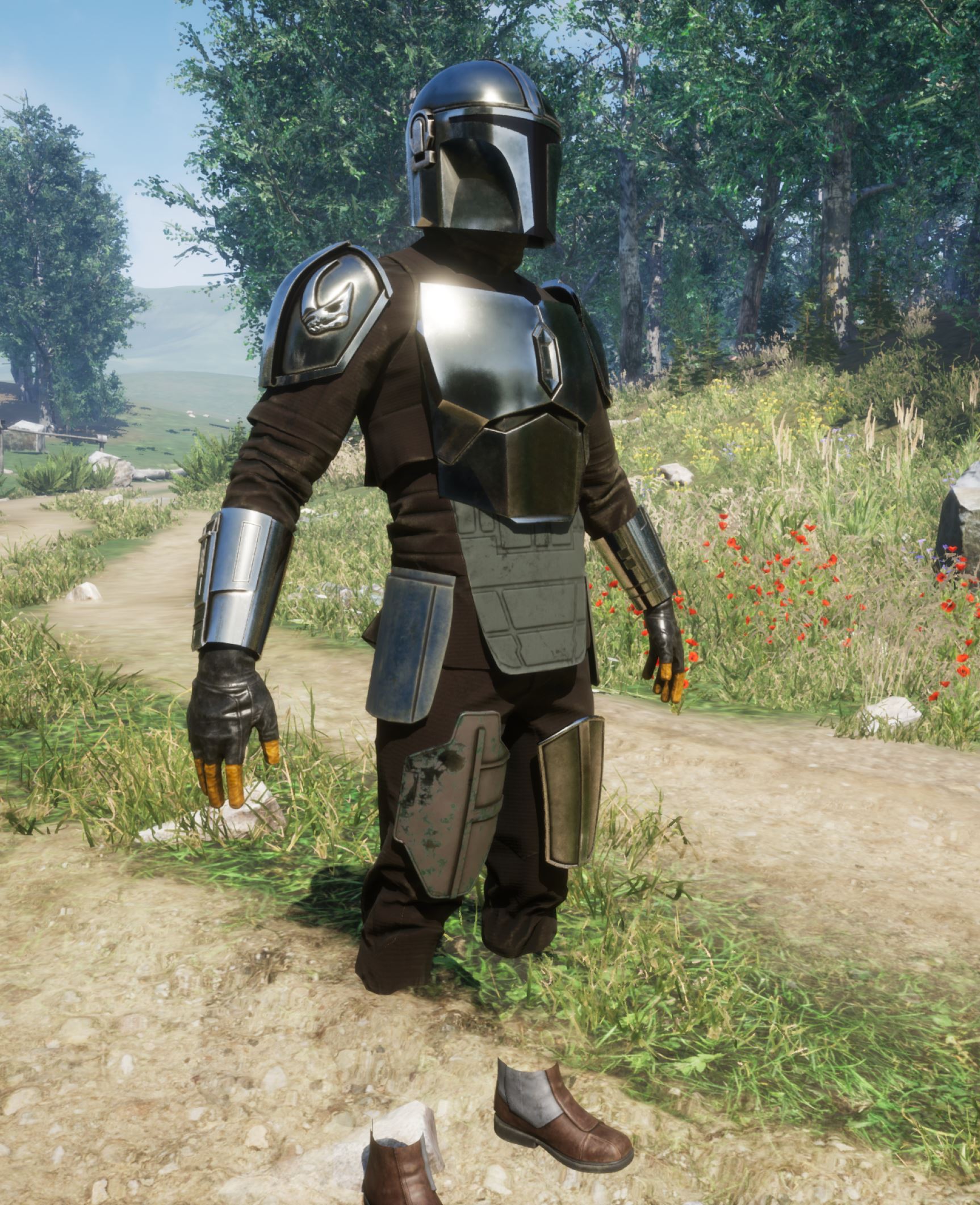 Welcome welcome Topher !
Thats some useful skills to have when you are into costuming! Say... how difficult would it be to create 3D pint files from the work you do?

Regardless.... Interesting work! What game / engine did you realize the Mando in?

Amazing work!
If you are interested in getting anything 3D printed please let me know. I can do very large 3D prints in high resolution resin.

RamSkirata said:
Welcome welcome Topher !
Thats some useful skills to have when you are into costuming! Say... how difficult would it be to create 3D pint files from the work you do?

Regardless.... Interesting work! What game / engine did you realize the Mando in?

Hey Ram,
Modeling for games and modeling for print are definitely different beasts. For games, we worry about performance. That means trying to make things look more round and more smooth while actually being quite blocky. We often use images with greater amounts of detail to fake the shape even more.
That being said, I have had the opportunity to print a few of my pieces. One of my schools gave me access to a 3d printer when it was purchased a few years ago. It was this Xerox machine sized FDM printer that produced lackluster results. I made a few prints and list interest.
The school then wanted me to teach a course on 3d printing. They were going to buy sls printers for each desk and have me teach people that had never modeler to make a few trinkets. There wasn't enough interest in the course to get it off the ground.
I have a couple friends with printers and have given them pieces to test with. I also put an Etsy store together. Not sure what the rules are for mentioning that here. There isn't much there atm, just a couple pieces from this build that I knew would print nicely.

The engine I am using for putting this together is the unreal engine. The same one used in the production of the show.

Lazerjock said:
Amazing work!
If you are interested in getting anything 3D printed please let me know. I can do very large 3D prints in high resolution resin.
Click to expand...

Thanks, Lazer,
Where are you located. Very large prints cost more to ship.

That's not too bad, I'm just outside of Toronto. How large are we talking? I have all the armor pieces complete and several would be nice to have physically. I don't want to dress up at all, but Mando's helmet on the shelf in my studio would look great. After last week, my daughter is also quite smitten with Bo-Katan. I may have to make her a bucket.

For things like buckets and armor it's best to source them from one of the many makers here on TDH. They do amazing work with vacuum formed ABS and fiberglass.
For things like knives, greeblies, jet pack thrusters, rocket or blasters. I can do that. If for some reason you can't find exactly what you need from a vendor then I can help.
I own 3 printers. The newest/largest is an SLA resin printer. It is the largest non-commercial grade available. Its print volume is 10.8" x 6.1" x 15.74".
Keep in mind many time the part is split to provide a flat surface for printing making the print job easier for the printer. This means I can create things much larger than the print volume of the printer. Recently I printed most of the parts to make the Mandalorian rifle for a TDH member.

This is great! I know this took a huge amount of work to finish. I've been working on modeling just the helmet for a year and am just now printing some usable stuff, so I know something with this amount of detail took some crazy effort.

ToEleven said:
This is great! I know this took a huge amount of work to finish. I've been working on modeling just the helmet for a year and am just now printing some usable stuff, so I know something with this amount of detail took some crazy effort.
Click to expand...

Actually, I have been just fiddling with this on the side. I use it as a teaching device. I started September 14th and Have just a little left to go.
Right now, I am working on getting the belt done, which includes the holster. As such, last night I put this little guy together so I can create the holster. It's not done, but I should be done by day's end. That's the nice thing about having been in video games for 20 years, this stuff is child's play to me now. 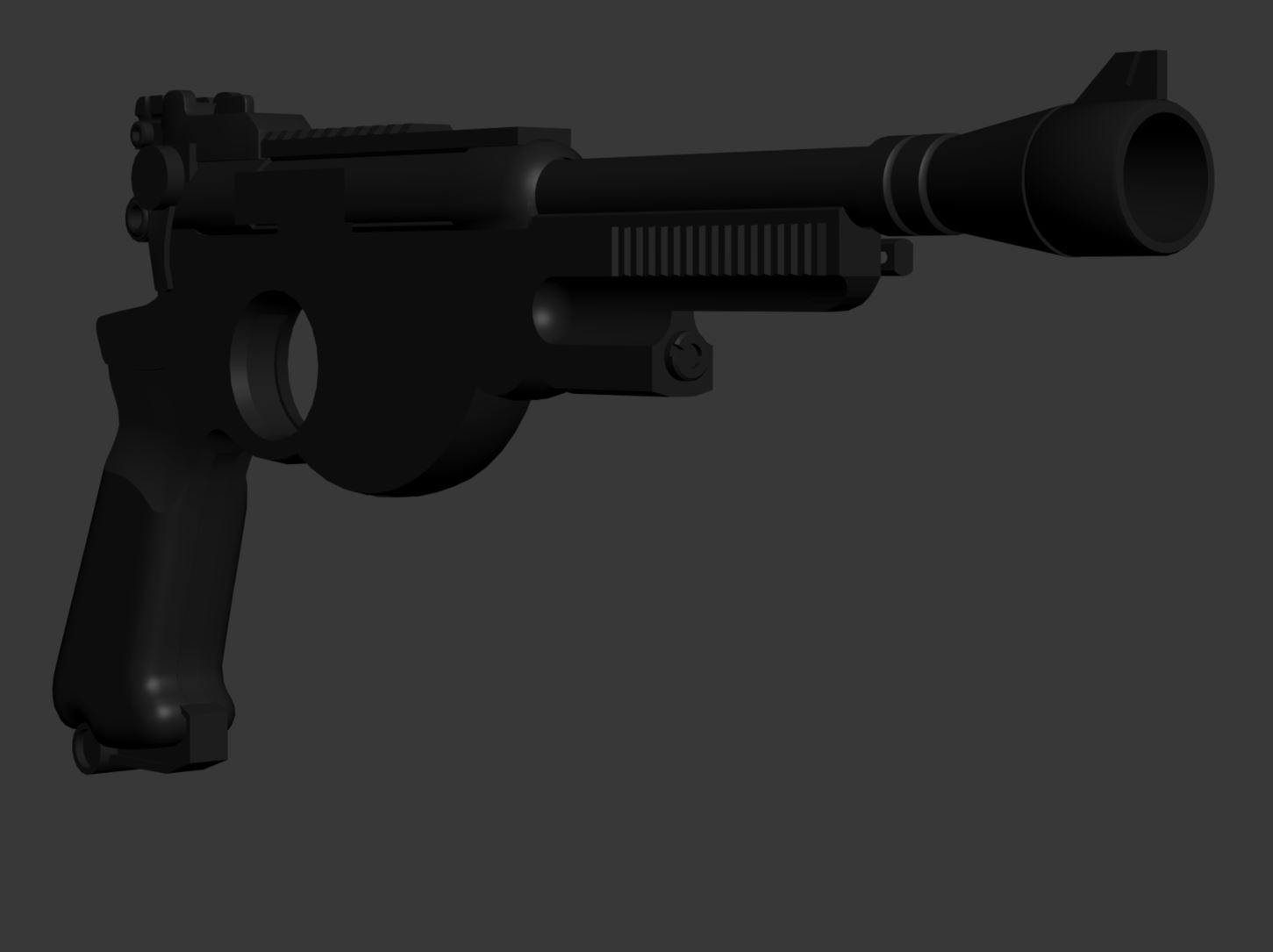 Very nice. What software do you model in?

ToEleven said:
Very nice. What software do you model in?
Click to expand...

I started out in Maya, but when I went to school eons ago, I converted to 3DS Max. Once I got into the industry I became a character artist and now work primarily in ZBrush and Marvelous Designer. I still Teach Maya and Max to my students.

Thanks for sharing. I've been working in Blender for a few years, but only really for the solid modelling tools. I would love to get my hands on ZBrush though.

Welcome man! I think that your stuff looks great! Have you ever used blender? That's what i use.

Frogfreak said:
Welcome man! I think that your stuff looks great! Have you ever used blender? That's what i use.
Click to expand...

Nope. Never touched it. The games industry doesn't really use blender. Every year I have a handful of students that dabble in it, but since the big studios use Autodesk software, they convert over.
Thanks for the kind words, btw.

Topher said:
Nope. Never touched it. The games industry doesn't really use blender. Every year I have a handful of students that dabble in it, but since the big studios use Autodesk software, they convert over.
Thanks for the kind words, btw.
Click to expand...

Ah, gotcha, i started using blender, because i had to go with something free. and i've gotten used to it.

Yeah, I can totally understand that. If my software wasn't paid for by the schools or the games I've made, I'd have gone the free router for sure. In the end, as I tell my students, the only thing that matters is the results.