Community Staff
This may or may not be common knowledge. I did a quick search but came up with nothing.

However, when Boba drops down to the skiff and raises his blaster to fire on Luke, the scope is CLEARLY on backwars, a la the ESB blaster. In all of the publicity photos I can find from that time period, the scope is on correctly, even from the famous skiff publicity photo. However, most recent publicity photos for the SE, in which Fett is holding the RotJ blaster which only has half of the cutoff scope, shows the scope on bacwards.

The point? From what I know, we have always assumed the RotJ scope went on correctly, but screen proof shows, like the ESB, you would be screen accurate to put the scope on backwards.

PS. I went back and looked at the Jabba's palace pics and while it is not entirely clear, it appears that the scope is on correctly, so maybe only the one blow apart gun had the scope on backwards.

If this has already been pointed out by someone else... well, what can ya do? Just trying to share something that is new to me. 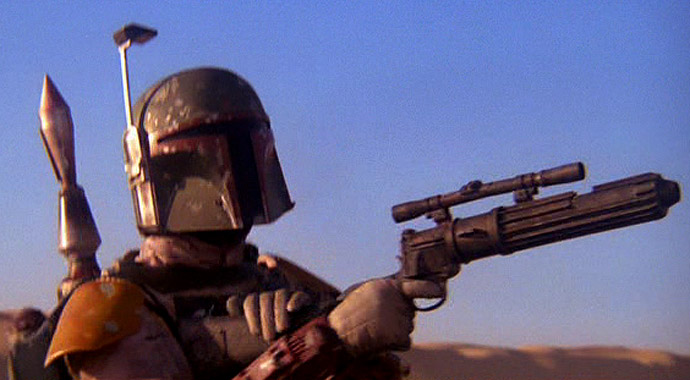 Interesting...
I hadn't seen that before...

I agree completely, I had three people think I was a dumb@$$ for mounting it backwards...

That is an interesting find though. I had never noticed that single scene where it was "correct".

ya. ive know bout this for a wile but cause im doing ESB i didnt really feel like mentioning it. i dont really know why it would be backwards but it is the gun thats spose to be cut in half. you can see the break in the scope right in front of the adjuster where its spose to fly apart so there could be a ton of reason like mabie the pyrotechnics they used couldnt fit in the other half of the scope so they switched it round for that increase in lengh. seeing as its just the stunt gun that blows apart i wouldnt worry bout the scope on that one.

Community Staff
You are right. It is indeed a stunt gun, but I am not sure I would dismiss it so quickly as being unimportant. In regards to what is seen on screen, this is the clearest image we have from the movie of Fett's blaster. I would say that makes it fairly significant and at the very least, a screen-accurate variant.