Hiiiiiiiiiiii
Newbie to thedentedhelmet, visiting from the 405th (as you might be able to tell from my profile pic )

Our good friend Din Djardin has some pretty epic beskar armour, and I want it so I'm gonna make it. Is this a project that a 17 year old kid can finish? IDK, but I'm going to start with just the rifle to see if I want to make the whole thing, in case I realize this isn't something I want to finish. 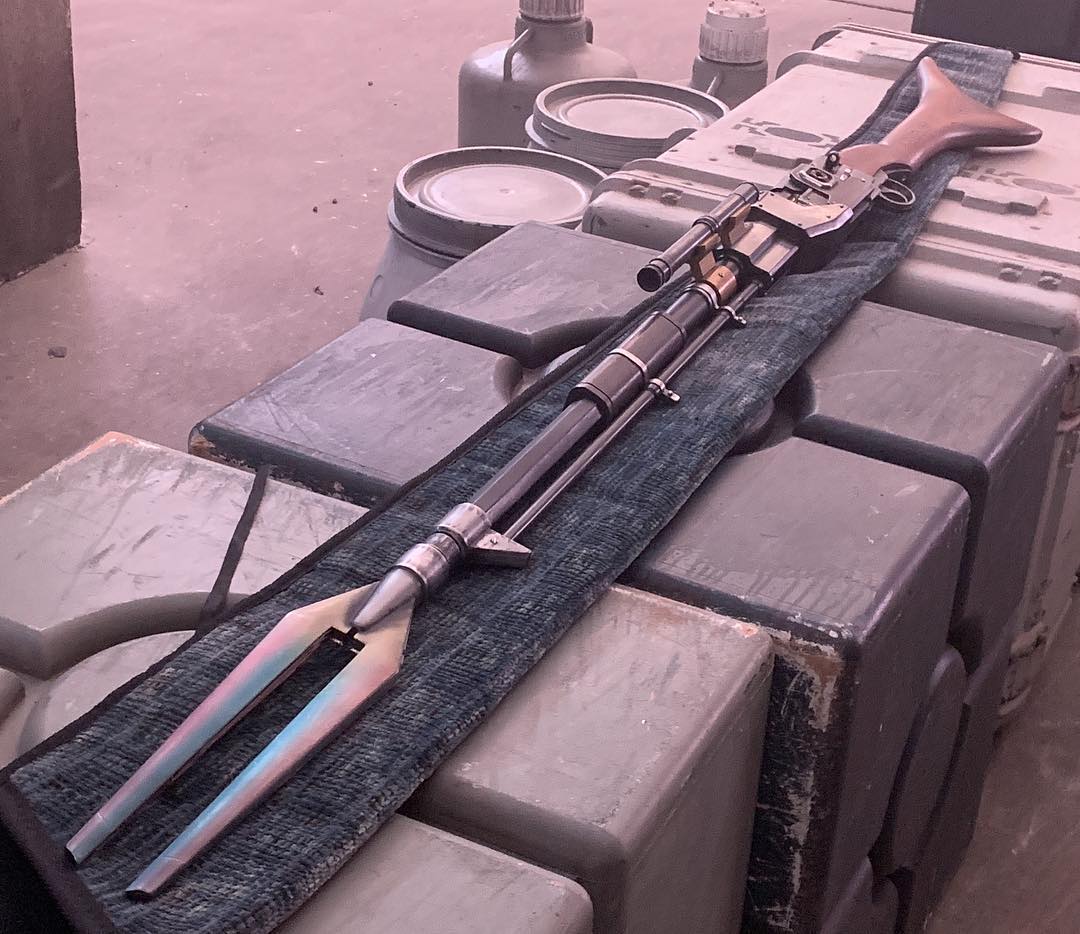 How am I going to make that? Well thanks to the power of 3D printing, it's actually not too hard! I used this free model: mandalorian blaster prop by OddWorks
I know it's not totally screen accurate, but it's close enough for me. Each piece took about 3-10 hours (depending on how big it was) and I roughly laid all the pieces out. 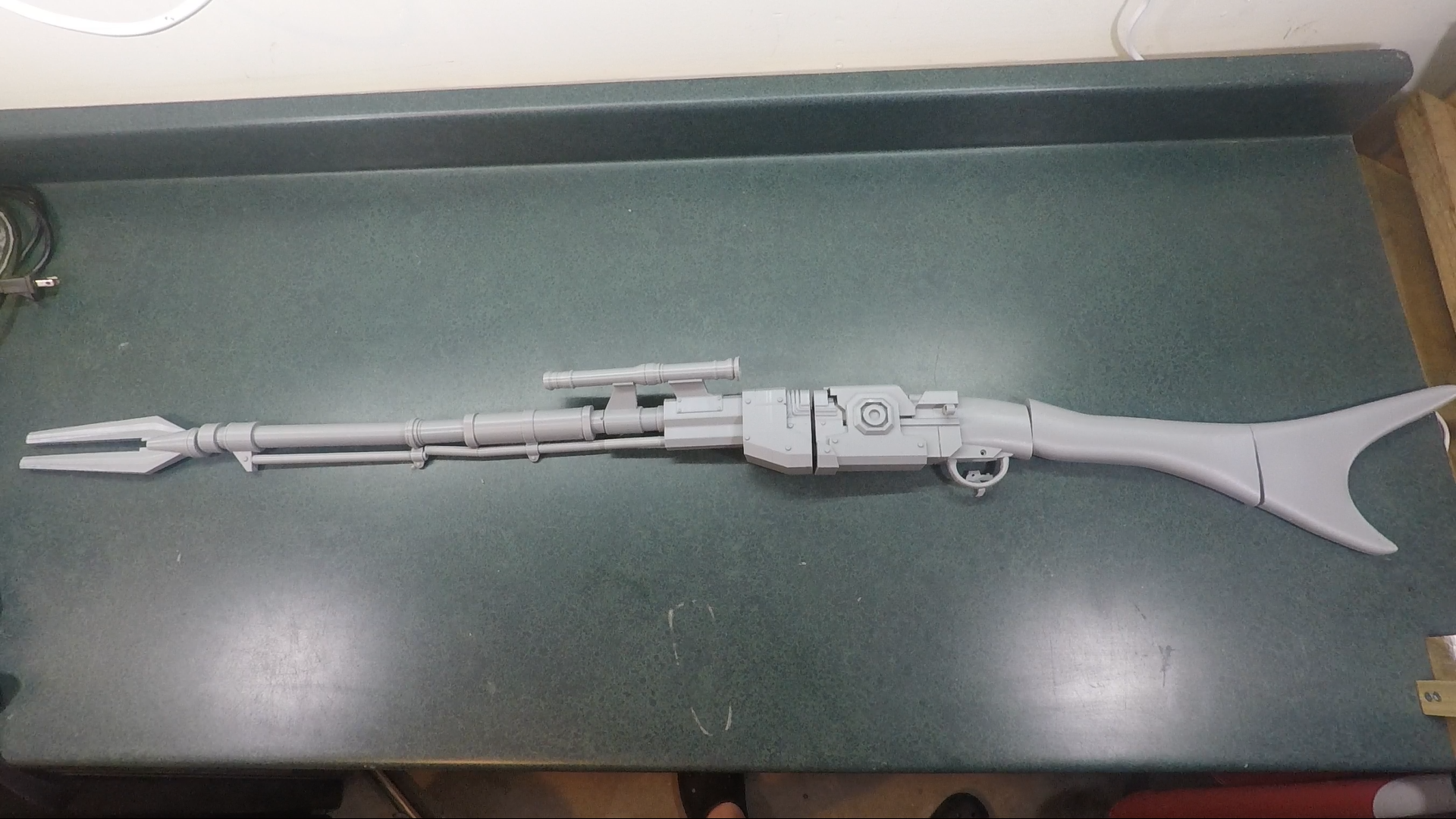 I then sanded each piece, gave them all a few coats of filler primer, and sanded them again. I also used some bondo spot putty to help fill in some larger defects. 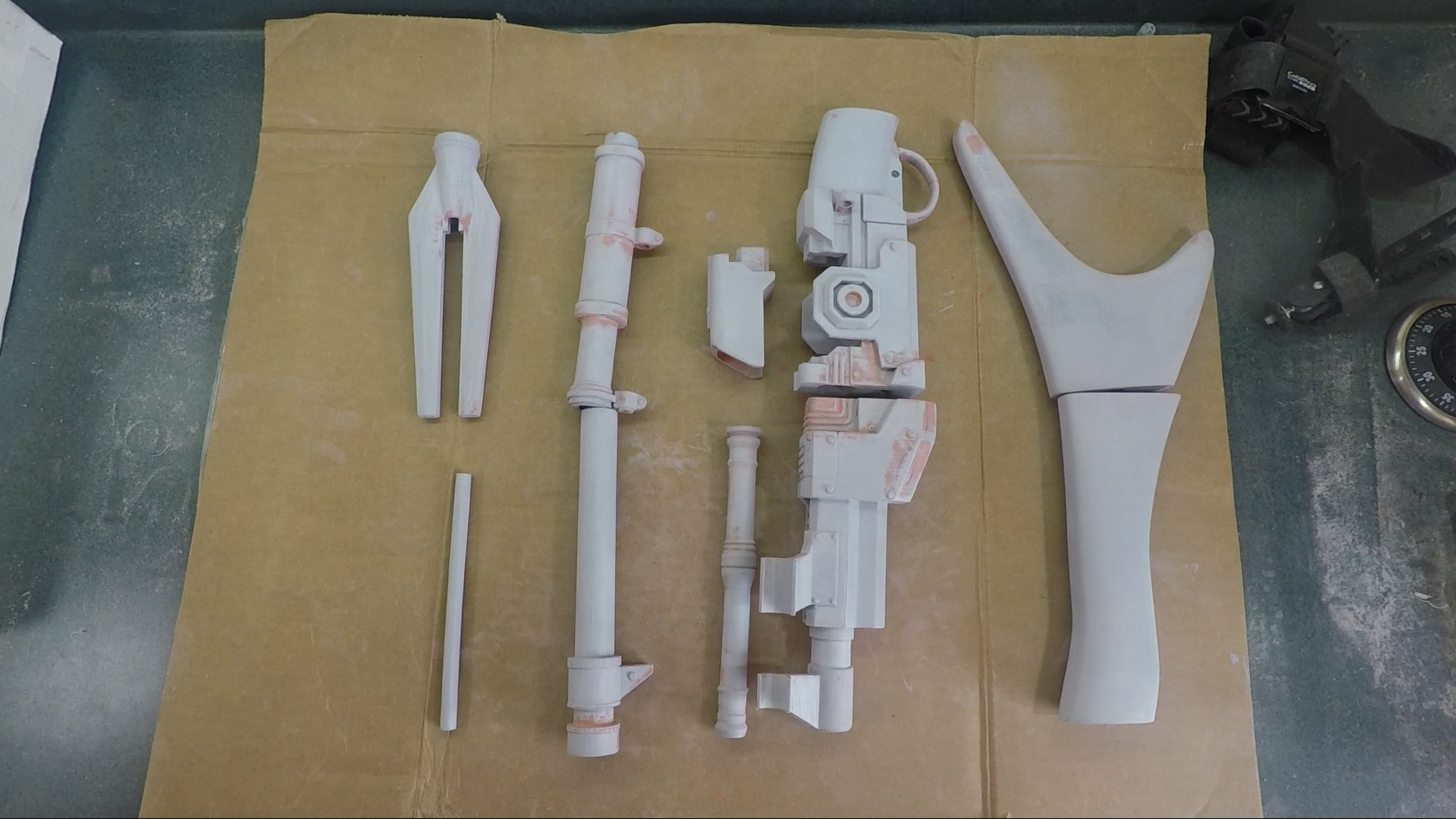 I also removed the narrow cylinder bits from the barrel of the gun because they were getting in the way of sanding. I'll add those back on later. Anyways, Glue! I used e6000 to stick it all together. OddWorks (the designer of the model) made square inserts to put inside the gun to securely hold it together and align it, and they really helped with assembly. 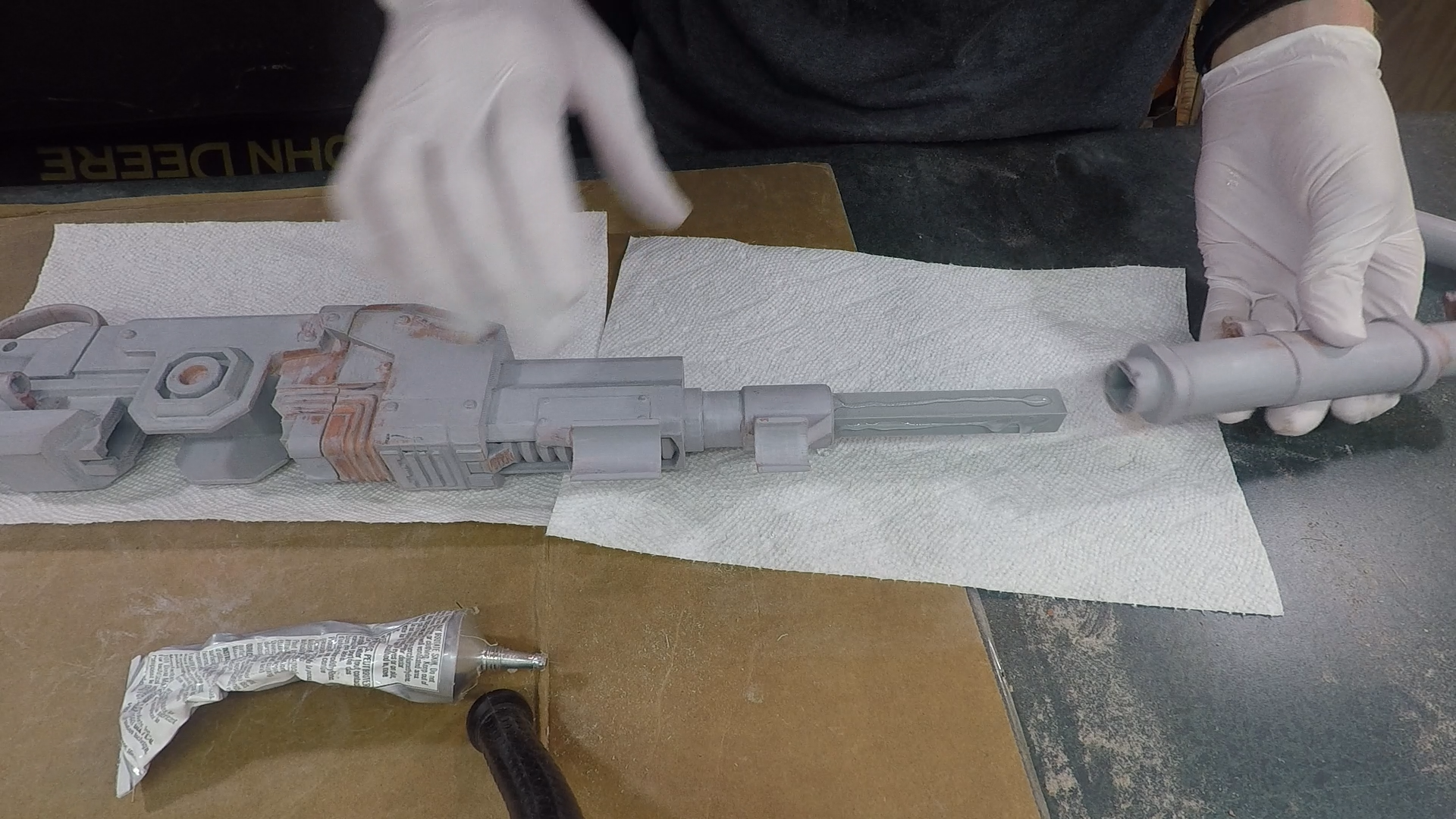 And of course now I have to fill in those gaps. So.... more spot putty and filler primer!

Yayayay!! Now for paint, which frankly is the part I usually suck at. First thing I did: a base coat of black

Now for the silver. I don't have money for nice paint, so here's what I did. I used a $20 airbrush and some dollar paint. I thinned the paint out with isopropyl alcohol and believe it or not, it worked! Tried my best to leave some shadows in the middle. I've never really used an airbrush like this before to this is pretty good for a first try I think! 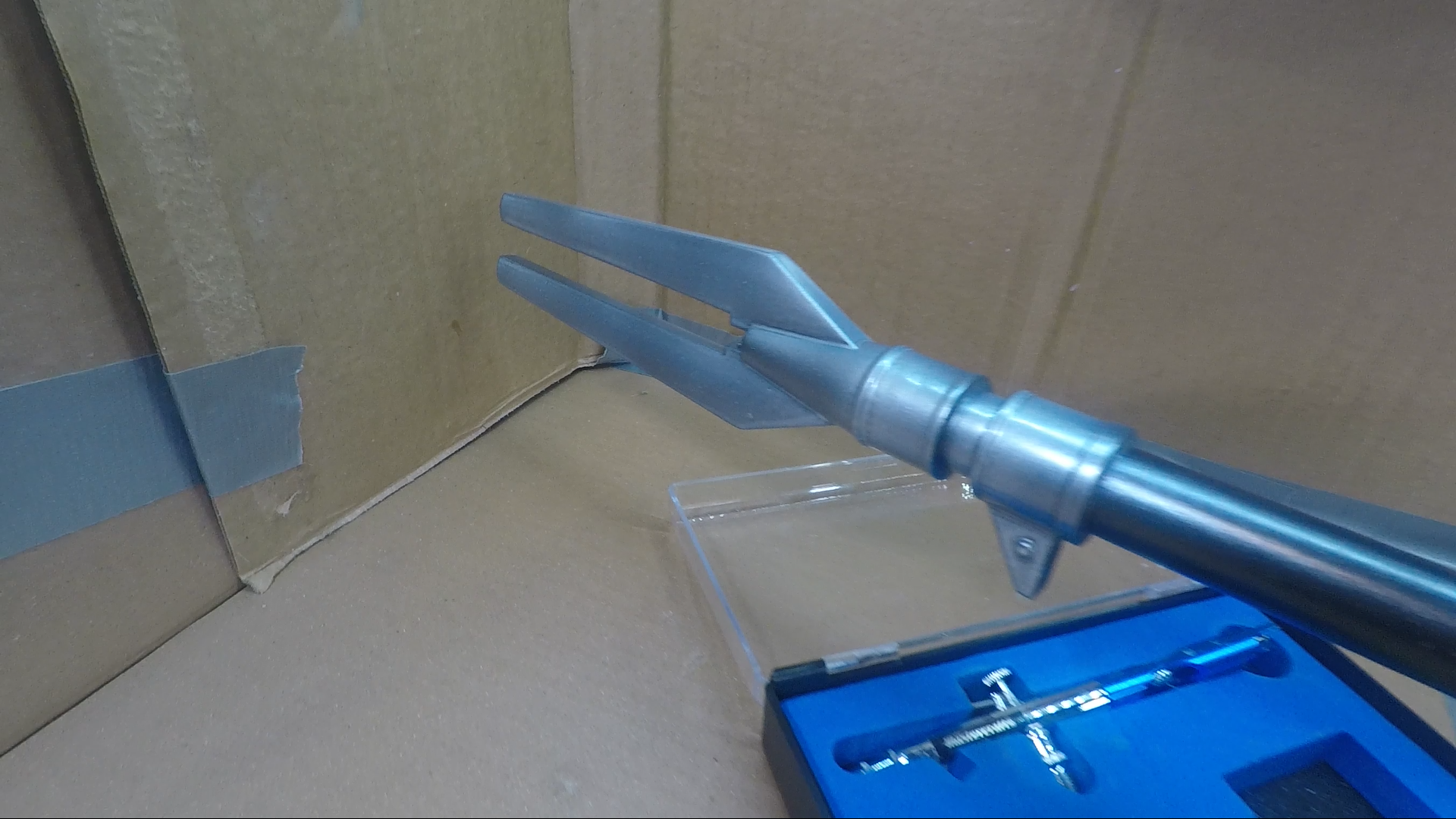 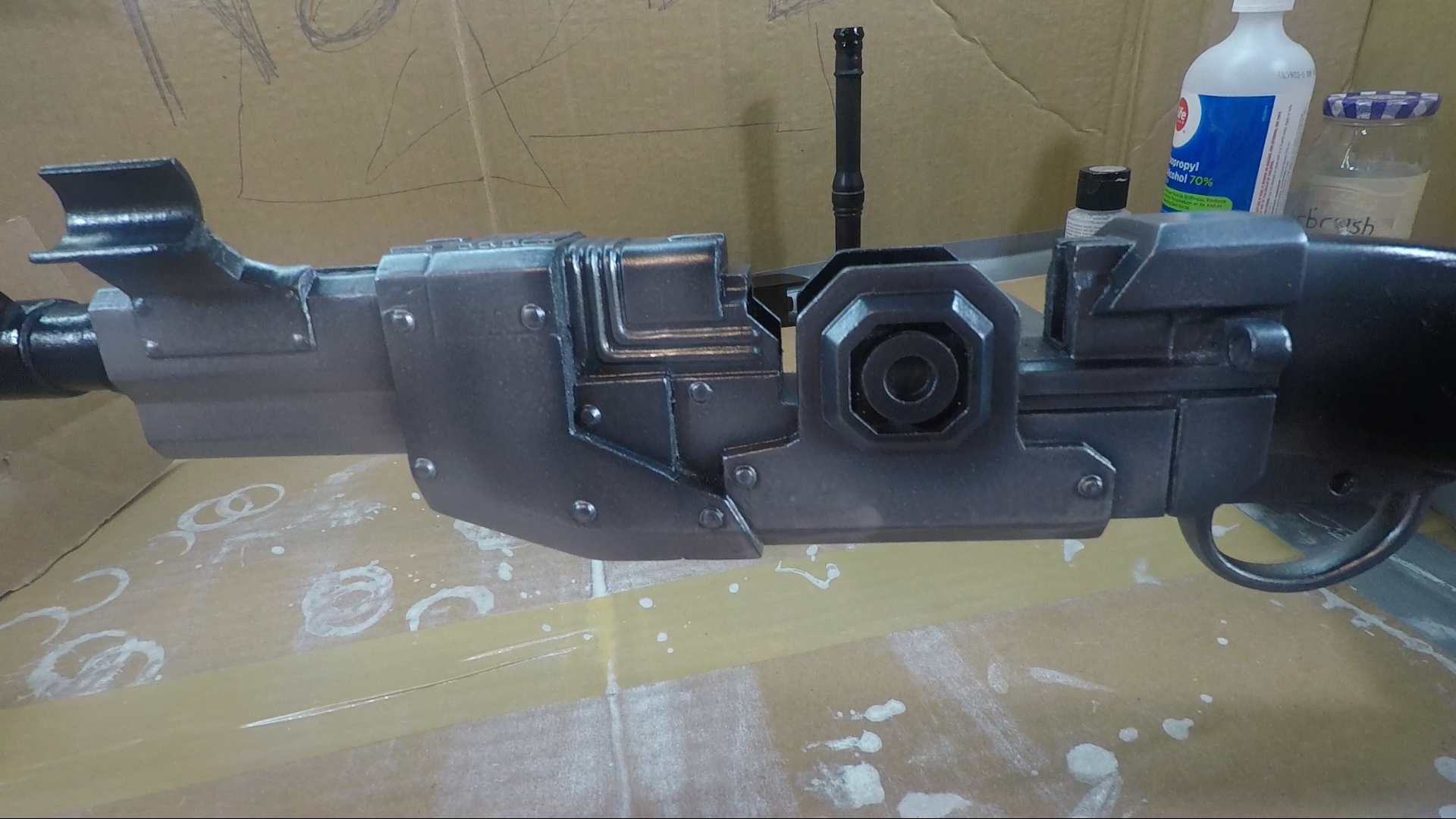 Then I used some gold leaf and silver leaf rub n buff. the gold was used to paint a few detail bits, and I used the silver along all of the edges and on the screws. It gives it a bit more of an authentic metal look I think.

I also used the airbrush to try and to the coloured bit at the end. Apparently when metal is heated up, a layer of oxide forms which distorts light, giving metal that coloured look. Didn't know that until I just googled why metal turns this colour. Again, I just used dollar paints water down with alcohol. 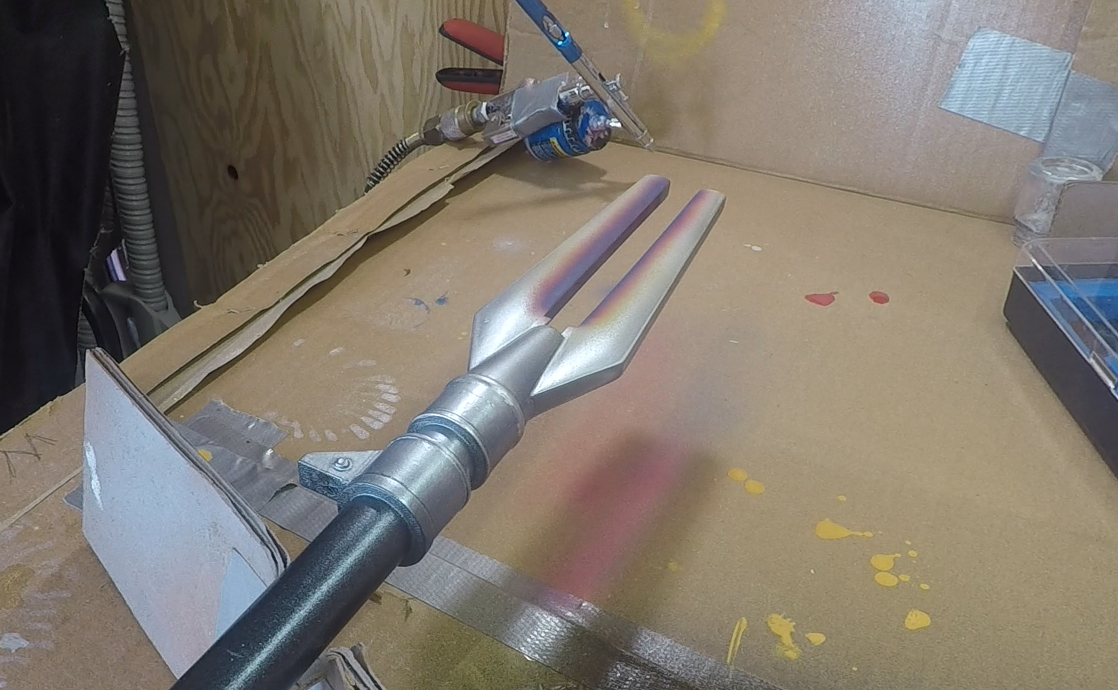 I also used this method for the lil bit in the middle of the gun that is coloured this way. Forgot to take a pic tho
NEXT!!
painted the bit in the middle brown,,, just spray paint. nothing too special about that. 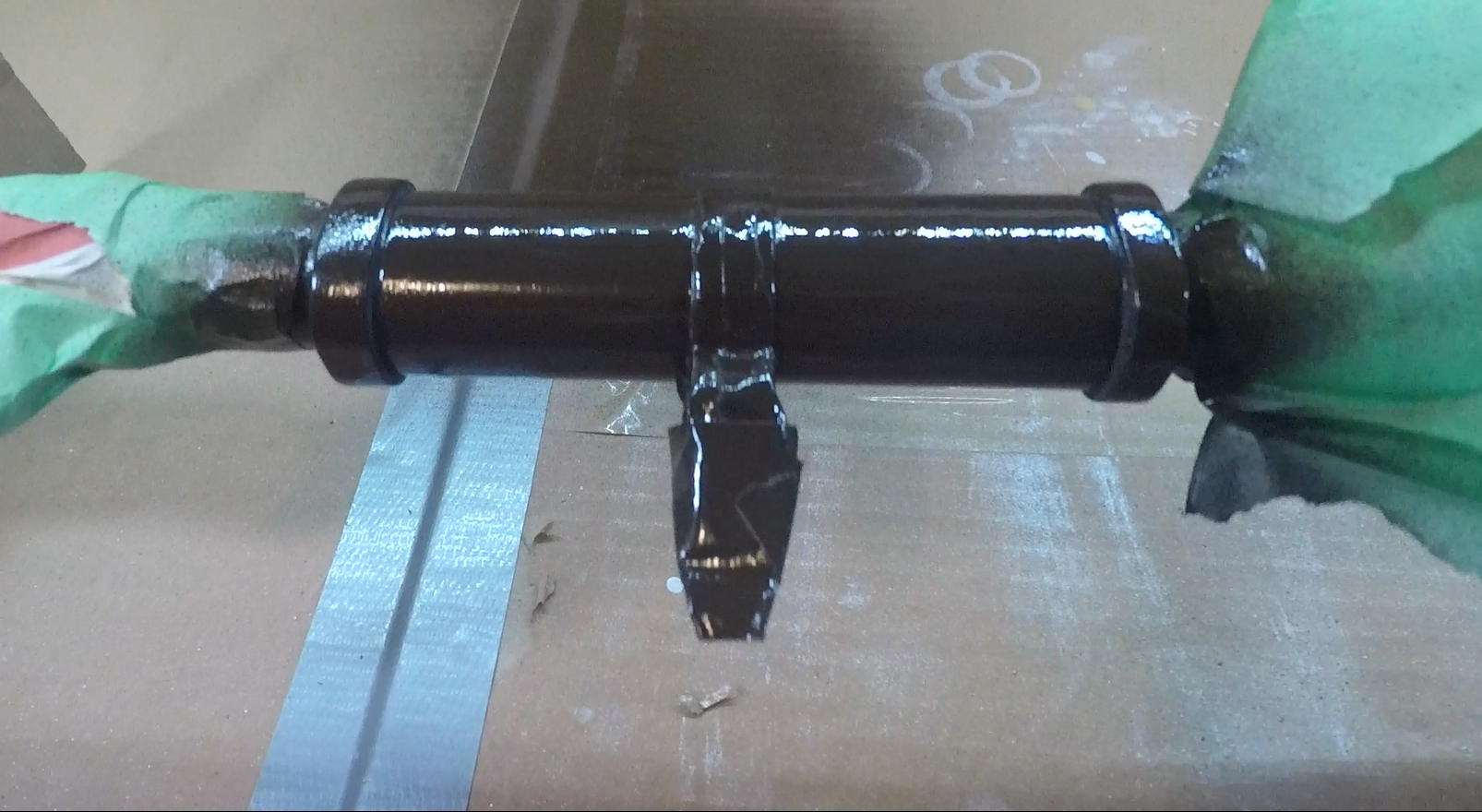 Now here's one of the coolest things! The wooden bit at the end. How will I paint it to look like wood??? I found this AMAZING tutorial on YT: I think it's the easiest way to paint something to look like wood. Step 1: apply a base coat of "Warm Caramel" Spray paint. (Unfortunately this colour isn't available in Canada where I live, but I have connections to some American buddies that went shopping for me. couldn't go myself cuz, ya know, Canadian border's still closed. It had to come across with some essential workers ;p) 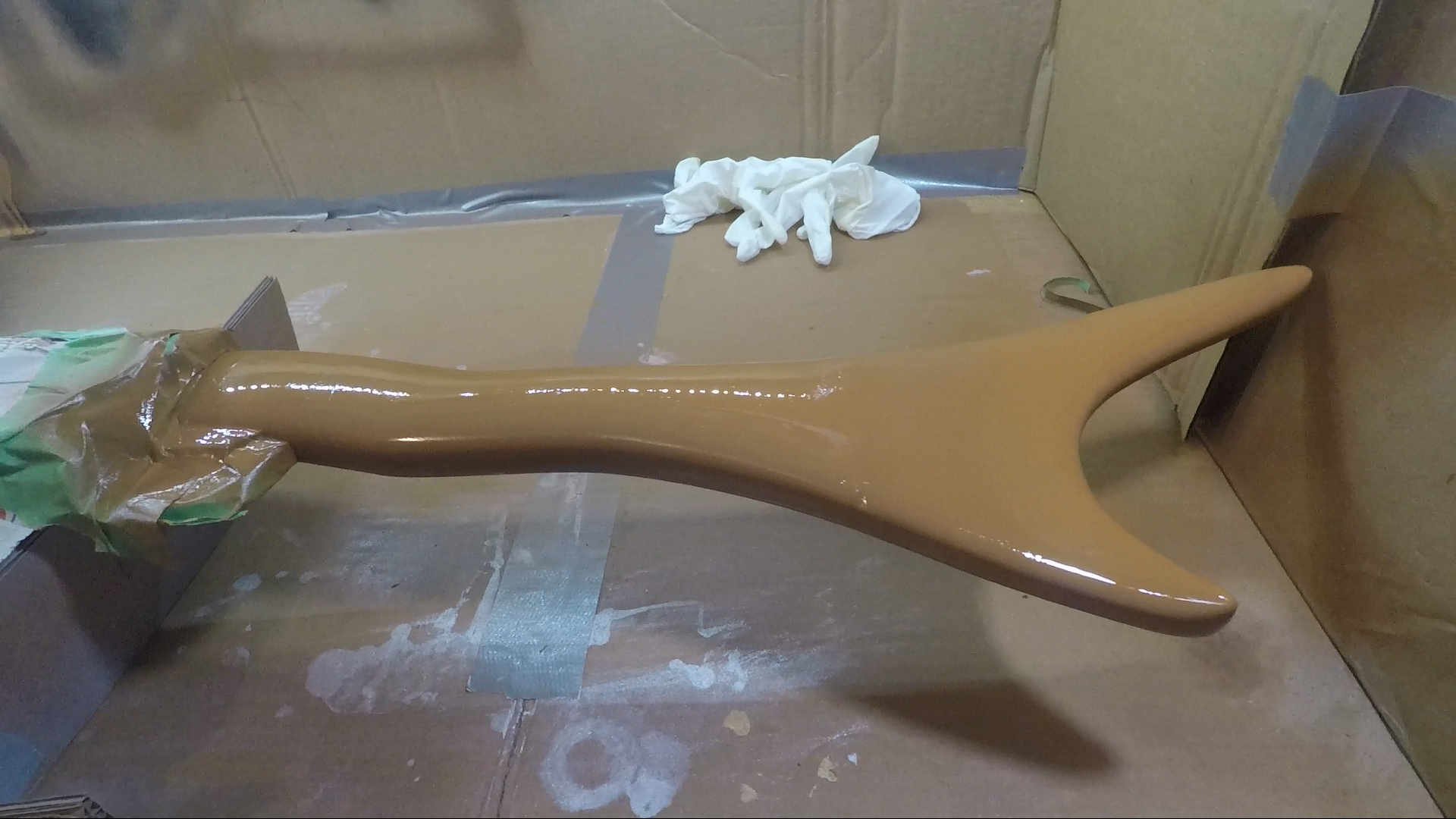 Step 2: Use a large brush to paint on "Dark Walnut" wood stain. Add lil swerlies and squiggles for a more authentic wood look! 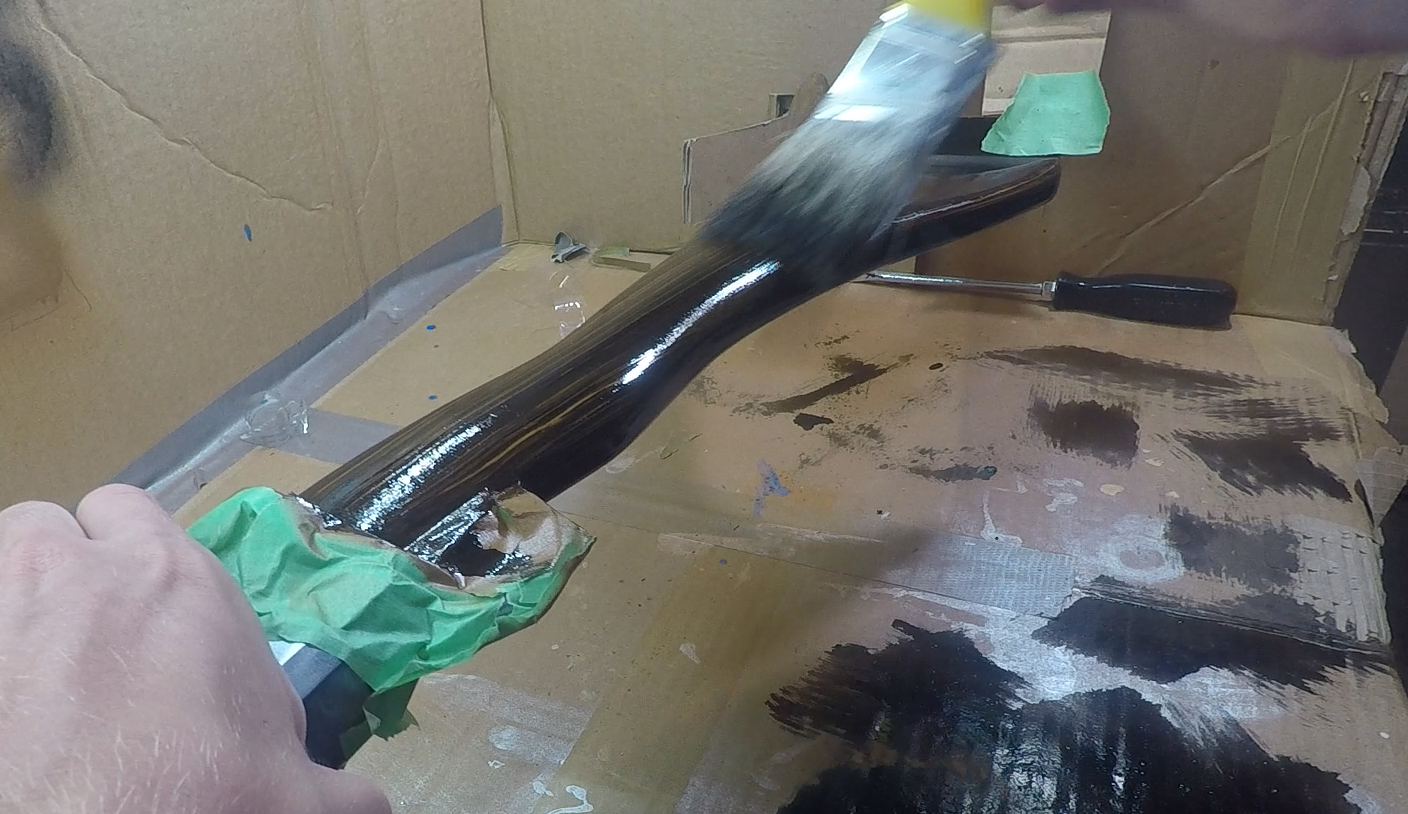 In the light it looks AMAZING!! Can't believe its' so easy to make plastic look like this! 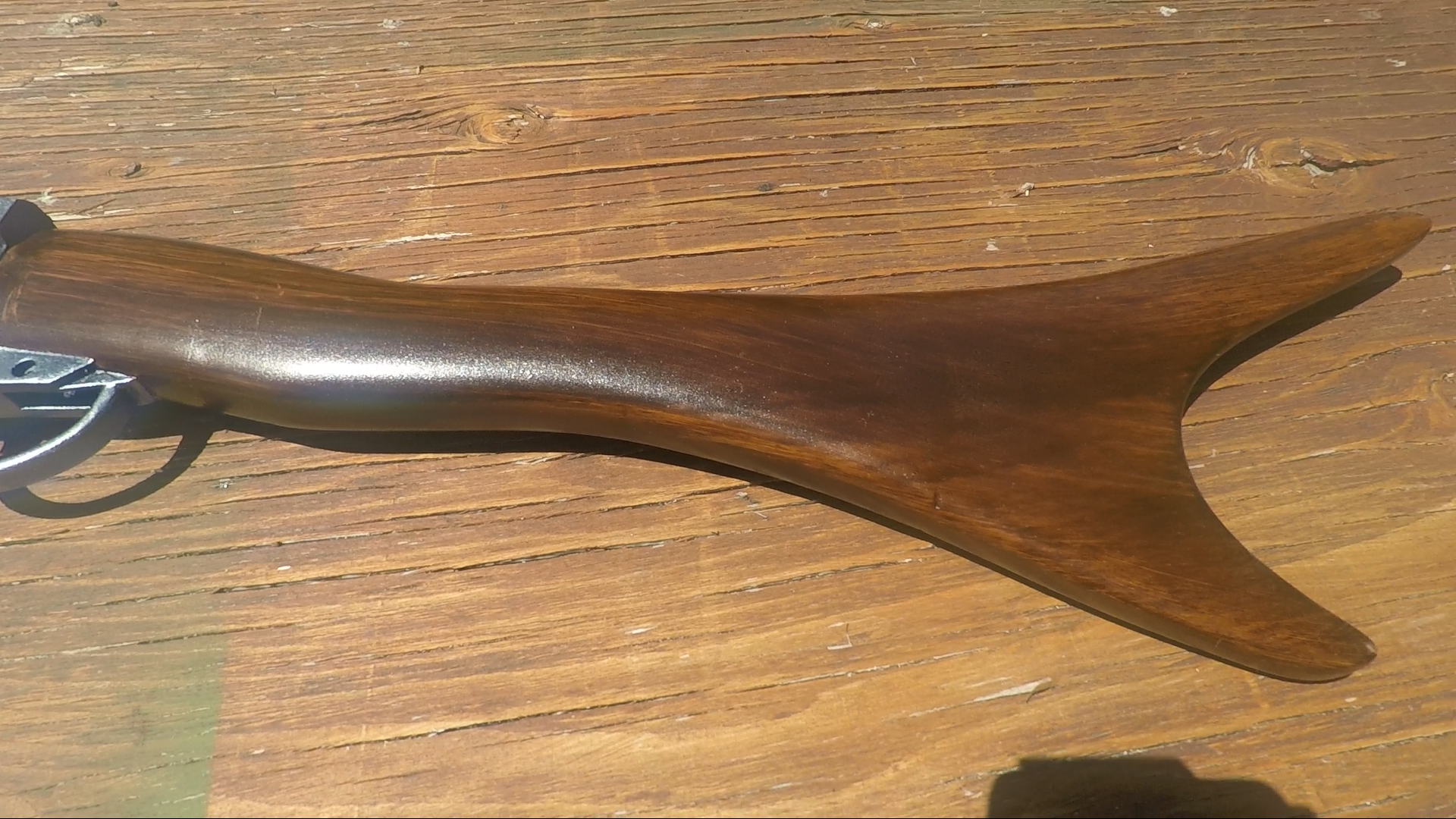 Gave the whole gun a coat of satin clear for protection.

Weathering. I used some watered down black and brown acrylic paint. I brushed it on and dabbed most of it off with a damp cloth. 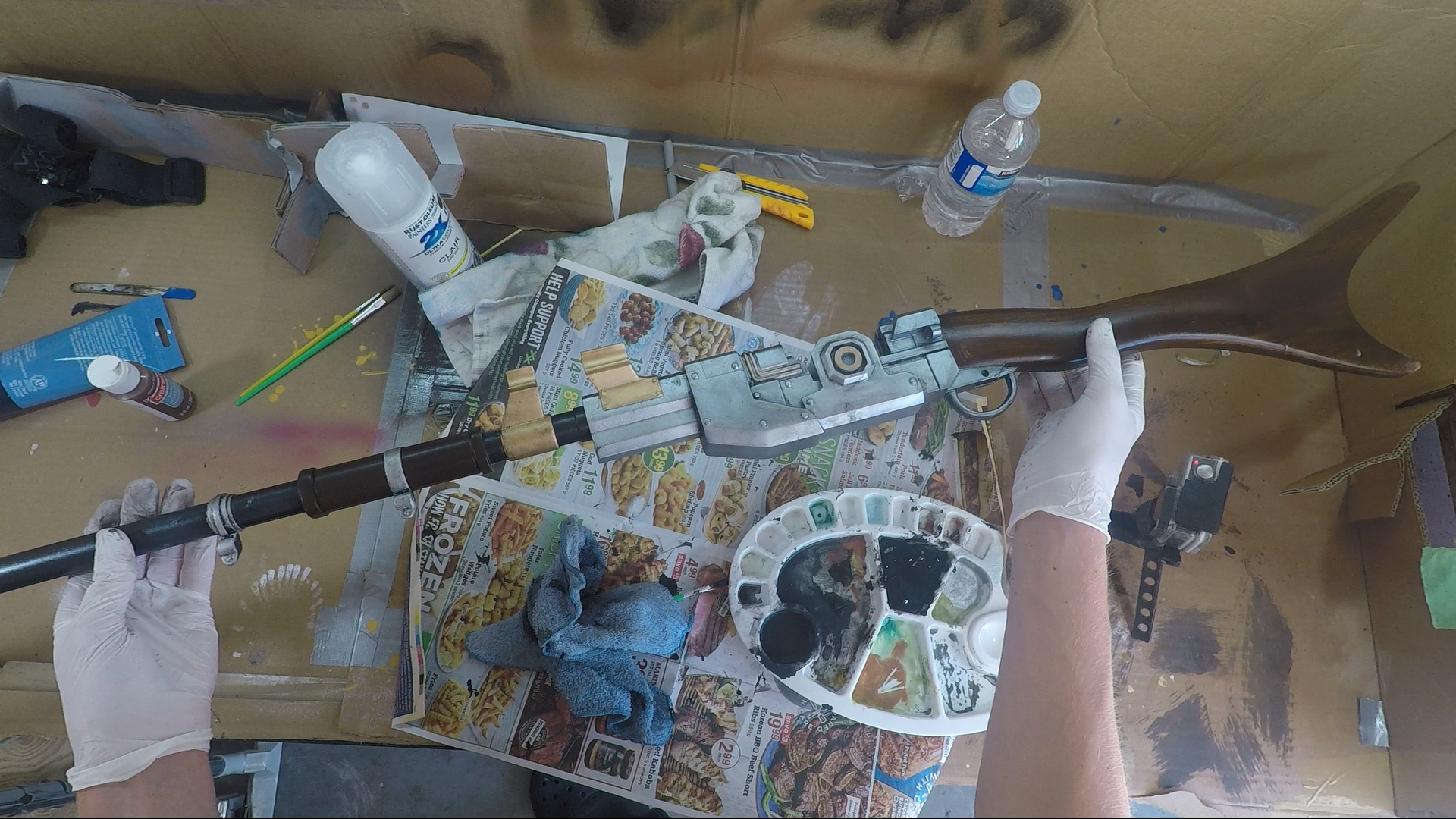 I gave it another coat of clear satin after that.

Remember the pieces that I took off earlier? Well now It's time to add them back on. I just used some CA glue. 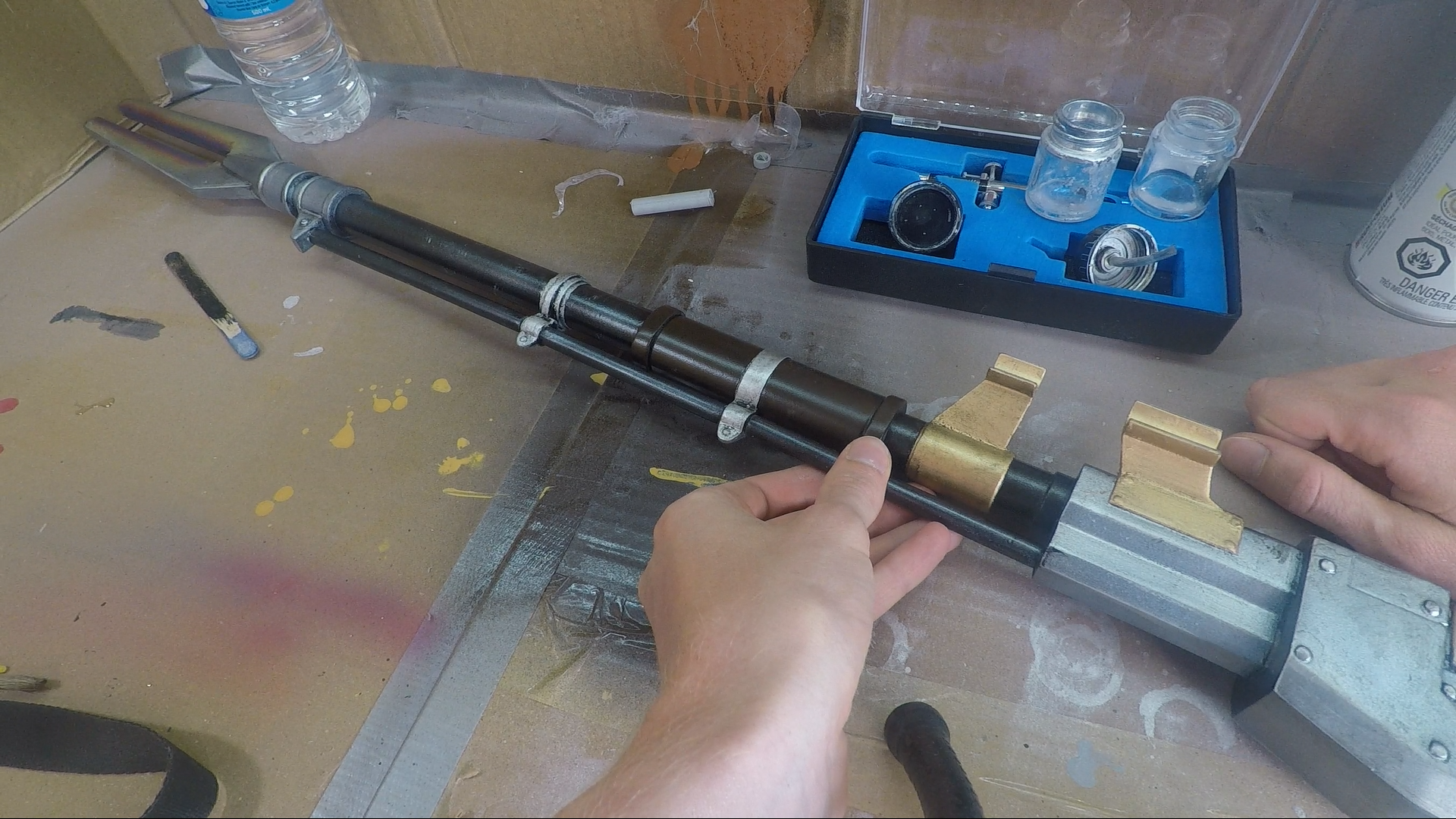 Also put in the Mag and trigger. There's a little spring activated mechanism designed into the model, which means the mag is removable and the trigger moves too! All nicely painted and weathered of course 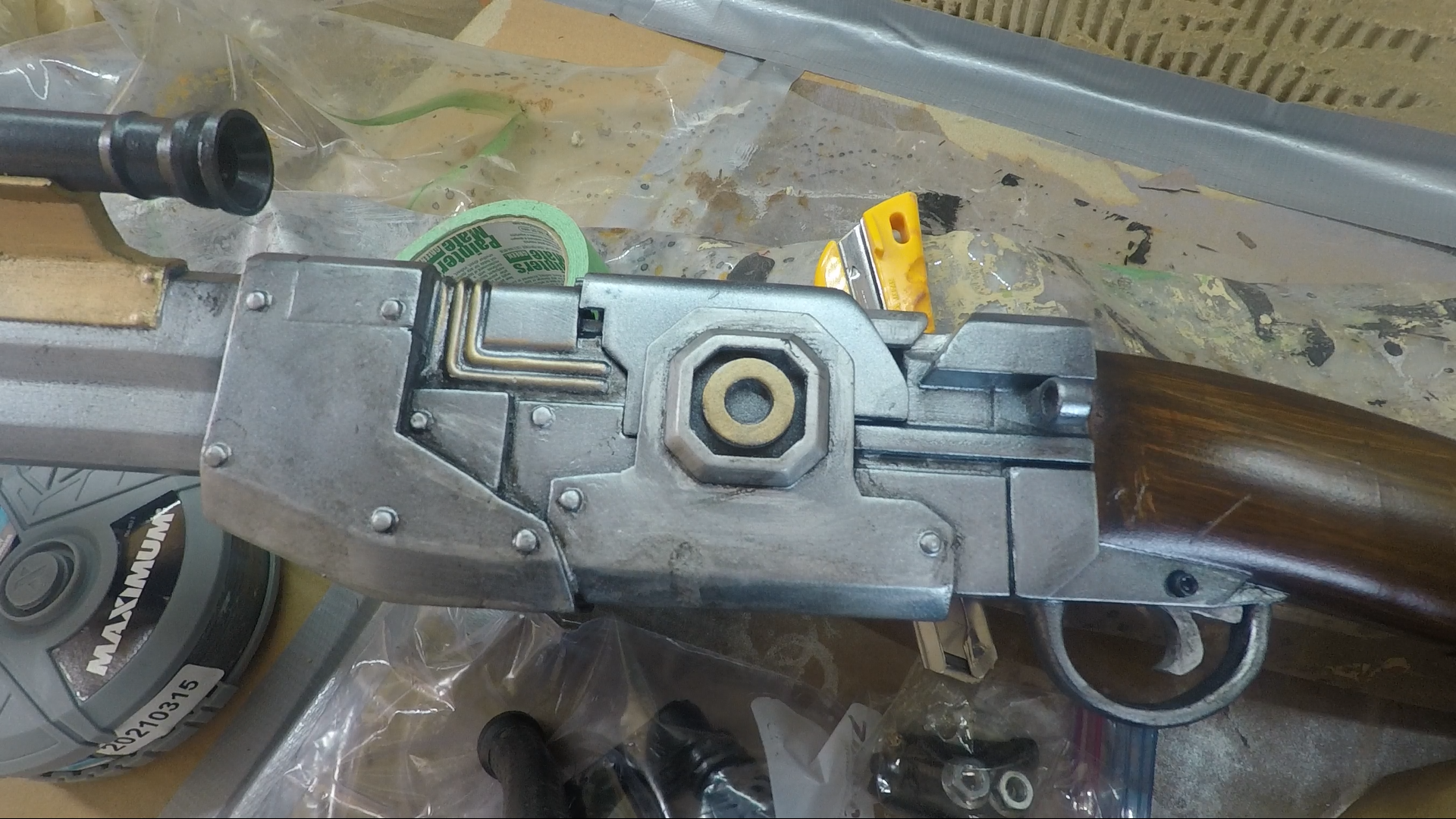 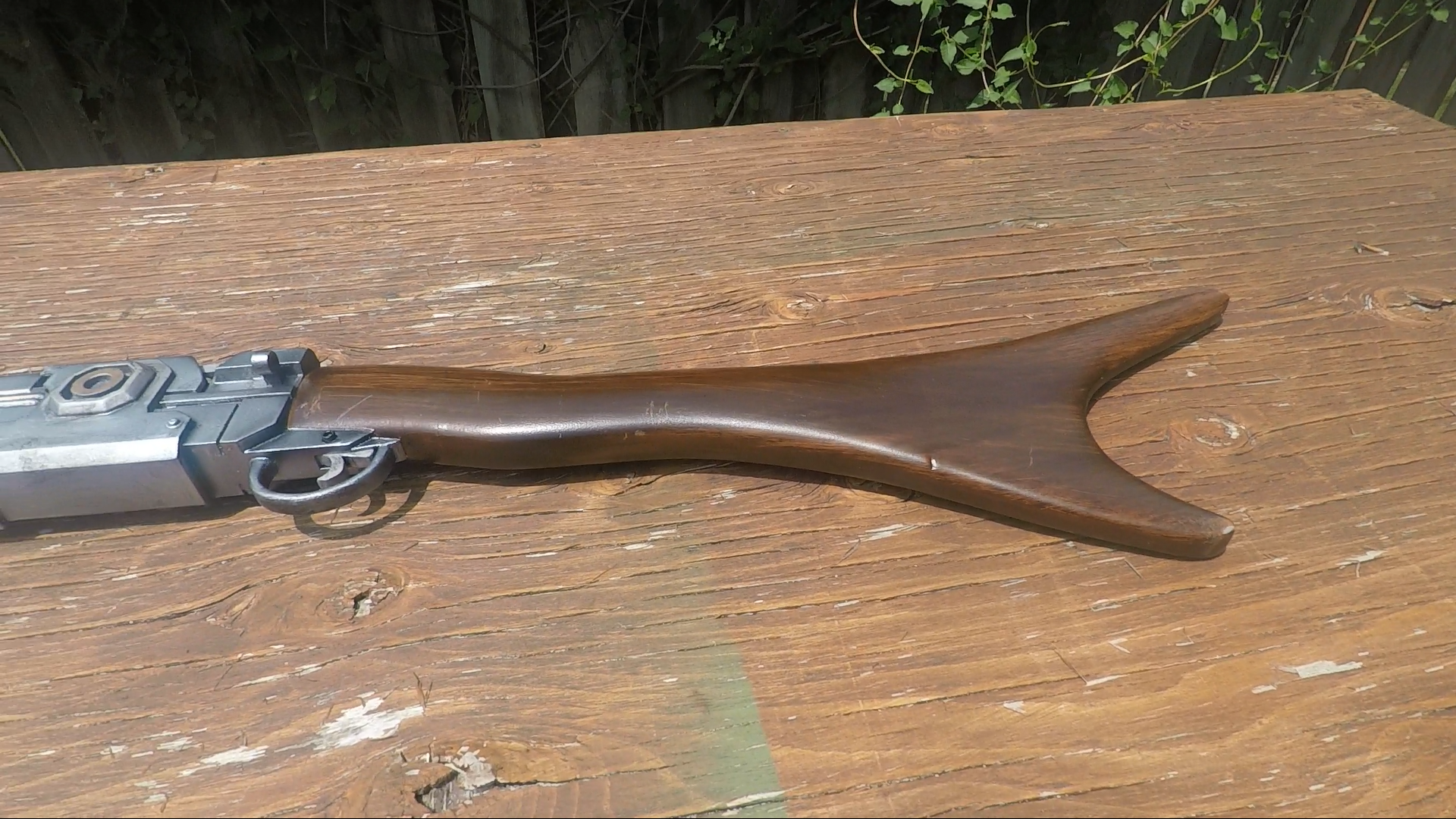 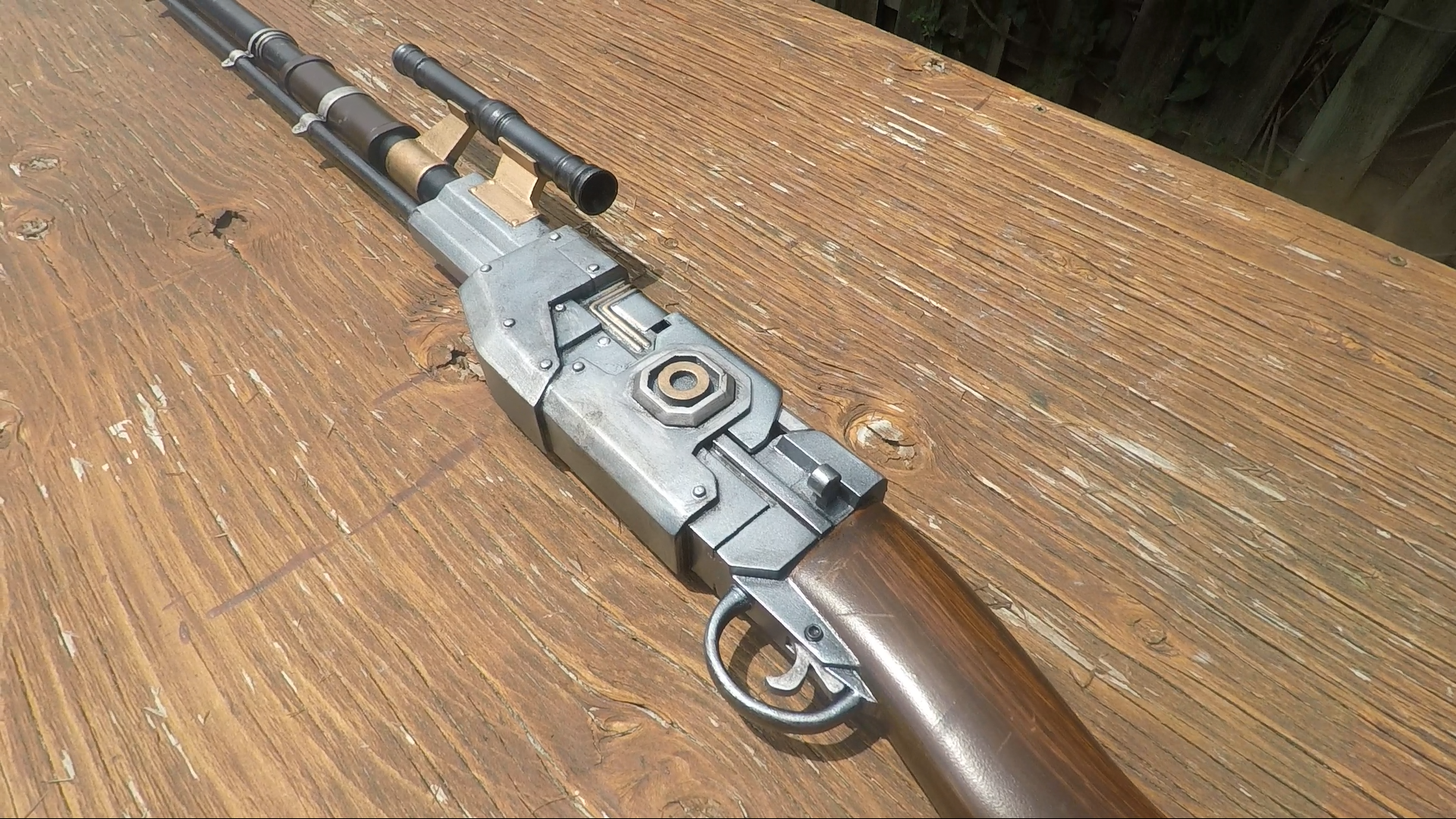 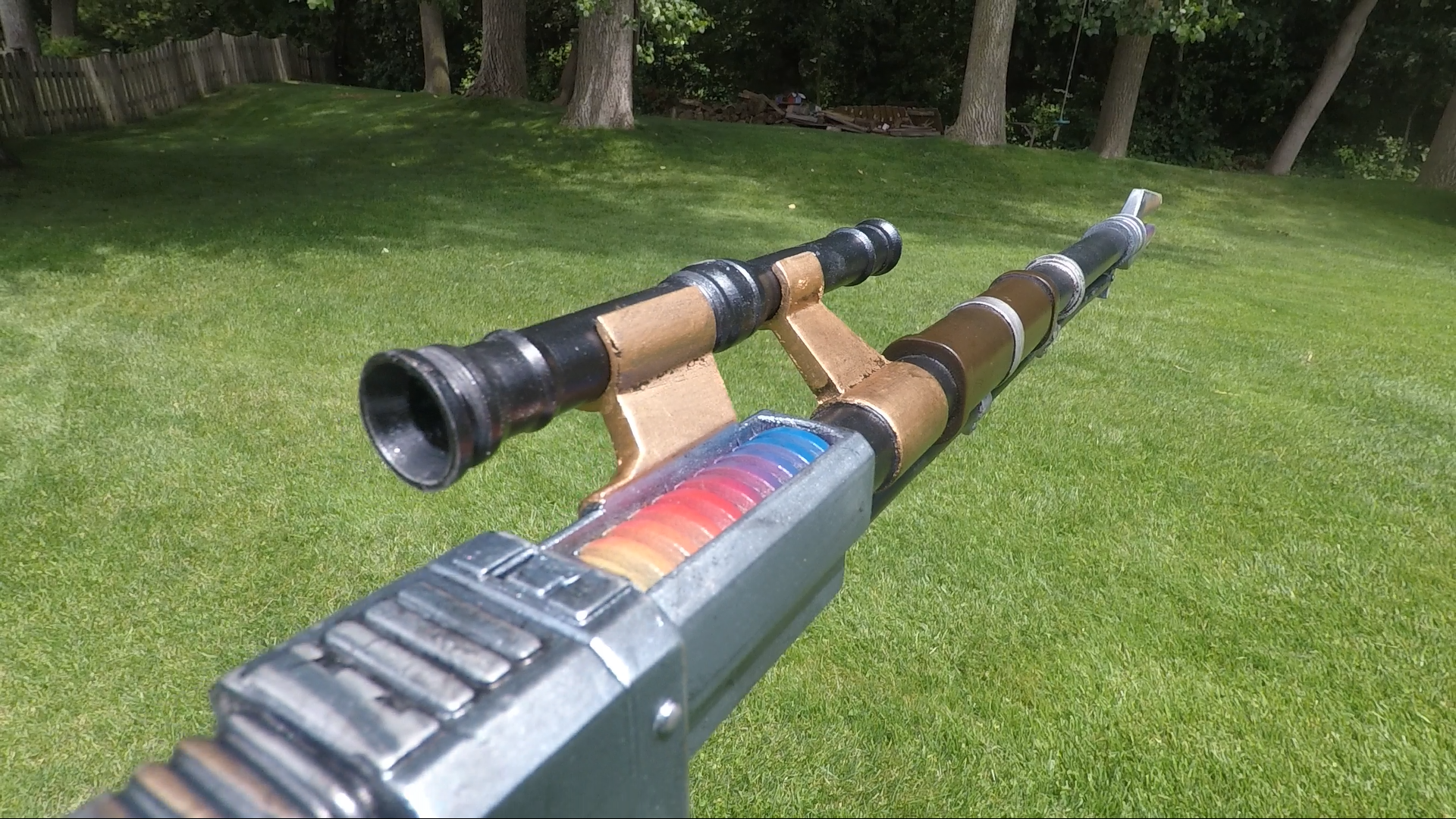 With the success of this project I want to build to rest of the costume. Hope it goes well! Thanks so much for reading! Yall got any question? comments? I'd love to hear from you guys! As I said before I'm new to the dented helmet and it's be pretty cool to get to know the community. I'm going away for the weekend but when I get back I want to try and be a bit more active on the forums. I'll probs post updates as the project progresses, instead of one big post after like what I did just now.
C

Very good job. Look forward to the rest of the build.

Do you hate reading?? Do you like youtube?? Well form now until forever There's a video version of this build!! Yay!!!!!
I mean I'm sure most of yall wont get anything useful out of the video, but hey maybe it's just entertaining.

3D printed pieces of beauty! Honestly most of these I printed a while ago, but it's time to get to work on em! I used a layer height of 0.3mm so lots and lots of sanding to do! oh yes bondo and filler primer too

Should have put this in the previous post:
ALL MODELS WERE FREE!!!!!

Super big thank you to all the designers that made their models available for free!!!! It's truly incredible how many free resources you can find!!

Where does the time go?!?!?! It's already august 8th!!
So what have I done this month? Basically, all of the armour pieces are completely sanded down and ready for paint.

Now I want to paint all the pieces last so the paint doesn't get damaged while I work on the suit. That means the next step is the flight suit! I'm making the flight suit out of a few shirts and a pair of jeans from Value Village. From what I can tell, the flight suit sort of looks like a short sleeve shirt on top of a long sleeve shirt, and then a vest on top of everything. While I was planning, I made sure that I didn't stack up too much fabric because I know how hot it can get in cosplay.

Ok so here's the plan: I cut the sleeves off a long sleeve shirt and used an elastic to hold them around my arm. Then I cut down another long sleeve shirt into a T-shirt and put that on over top. Lastly I cut off the hood, sleeves, and bottom of a thin hoodie and used that as the vest. I "nicely" sewed all the cuts to make sure the edges were clean. This is my first time using a sewing machine so it's pretty rough. 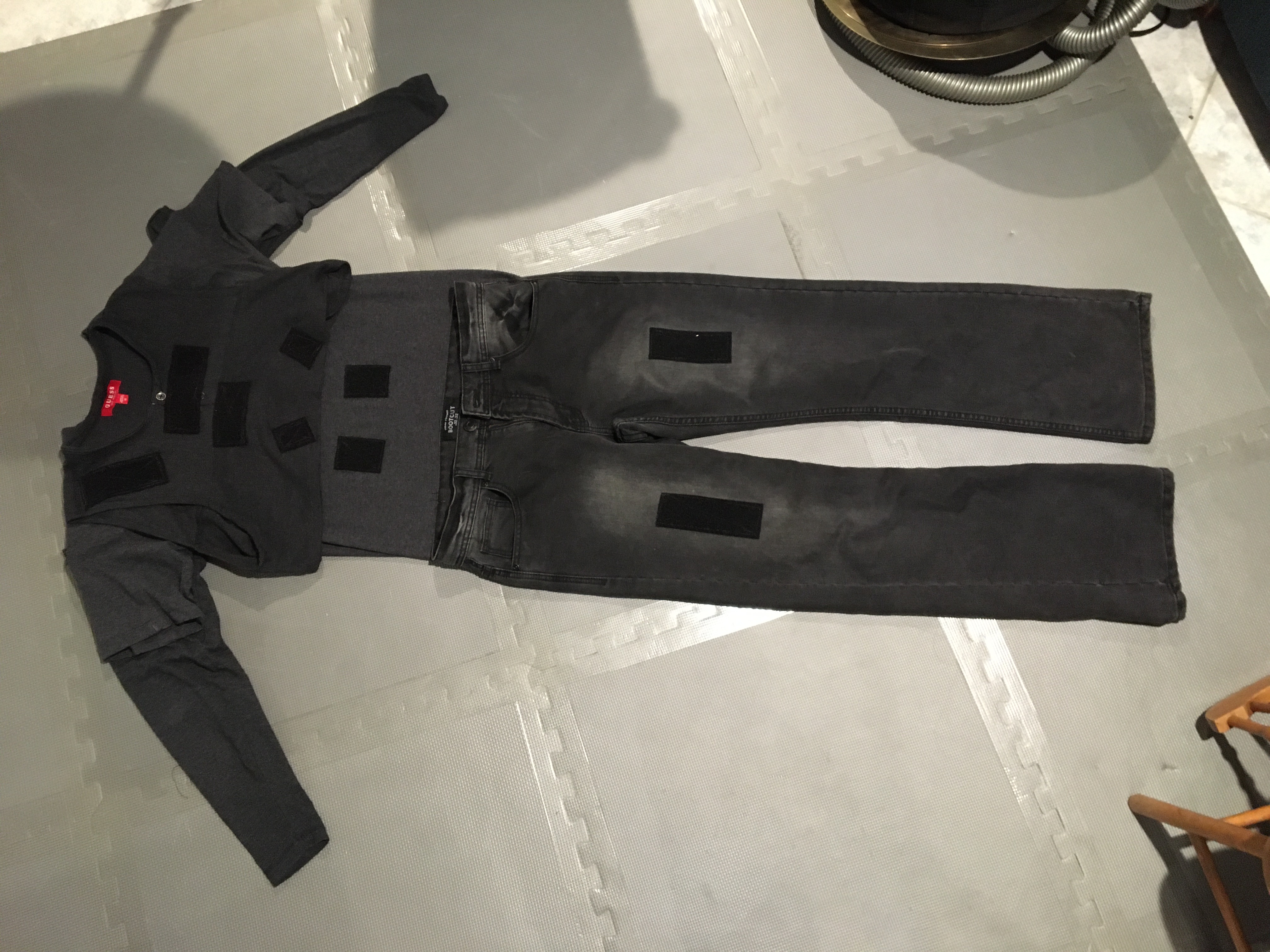 Trust me, it looks better when I\m wearing it

As you can see I've also started sewing on Velcro in strategic places to hold my armour. I've also stuck Velcro onto the armour pieces with E6000. Again, I'll wait until I have all the Velcro on to do the weathering, I plan to use an airbrush to make the suit a bit more brown and dirty.

Currently I'm working on the belt/bandoleer. I can't afford real leather so I'm just going to use foam. All that is in the works but should be done soon!! The cape is being worked on too! Once that's all done It's just finishing details, gloves, boots, and then paint

So um... I'm not dead! But I may or may not have completely finished the project and forgot about the forums until now. I'll try and make a few posts over the next little while hehe

Today I'll show you the belt and bandoleer. Basically I just used a regular belt, and made it wider by gluing some 2mm foam to the back. I cut the belt to size and used the cutoff to loop around the 3d printed buckle. 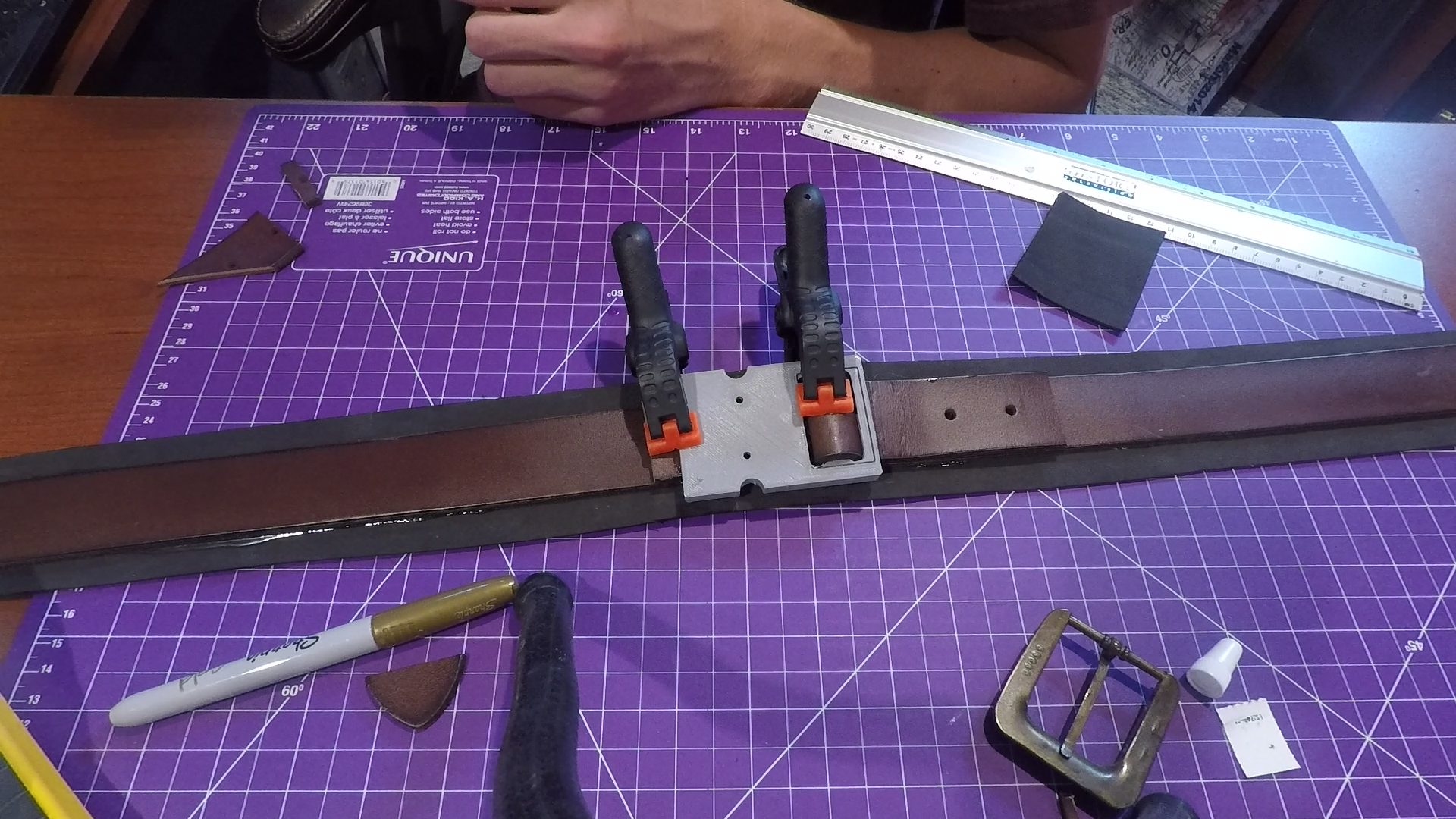 Then I used some more 2mm foam to cover where the fake loop ends and made a small pouch to hide where it ended. 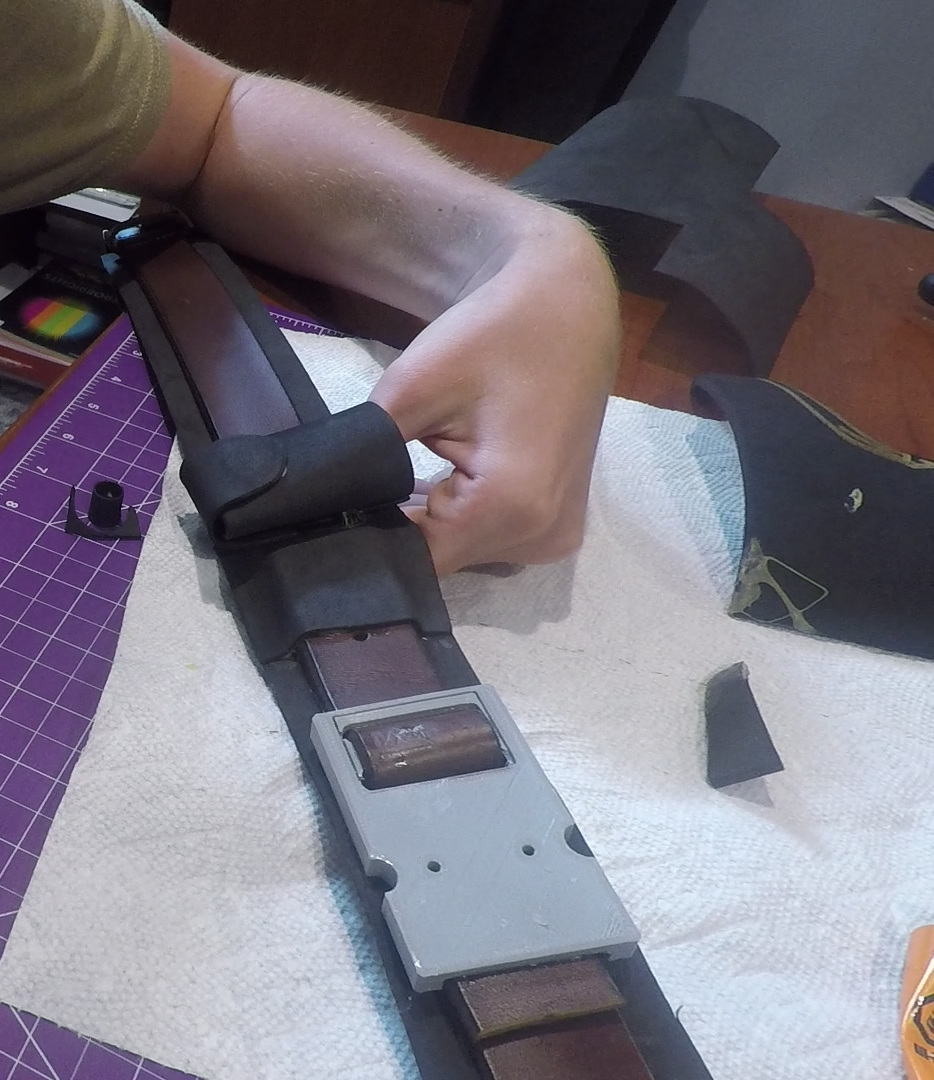 I made another small pouch and glued it to the other side of the buckle. 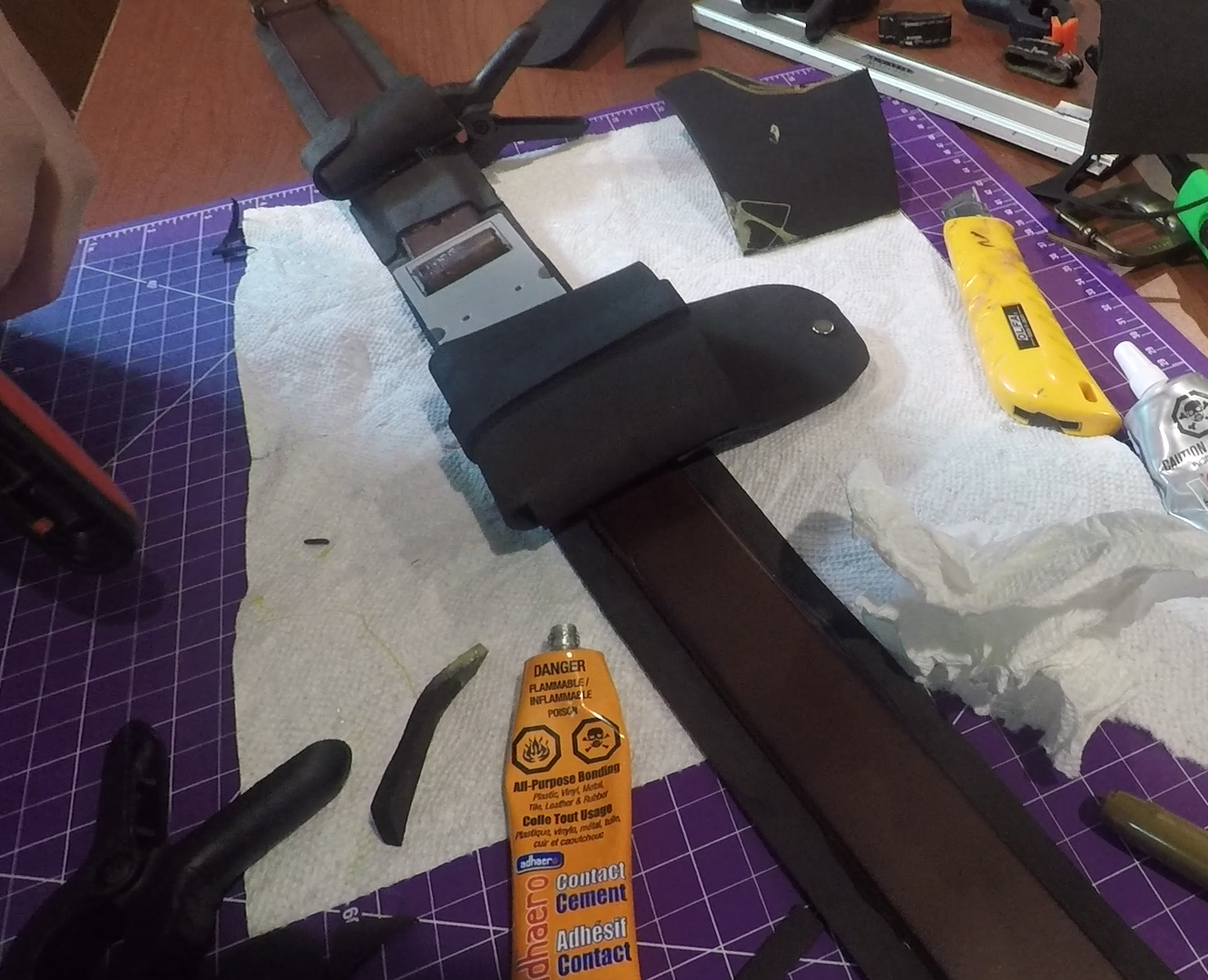 All the belts and foam were coated with plasti dip, and then brown spray paint. I added a 3D printed detonator holder. I did want to make it light up, but I was on a time crunch and didn't have time to fully think through how I wanted todo it. 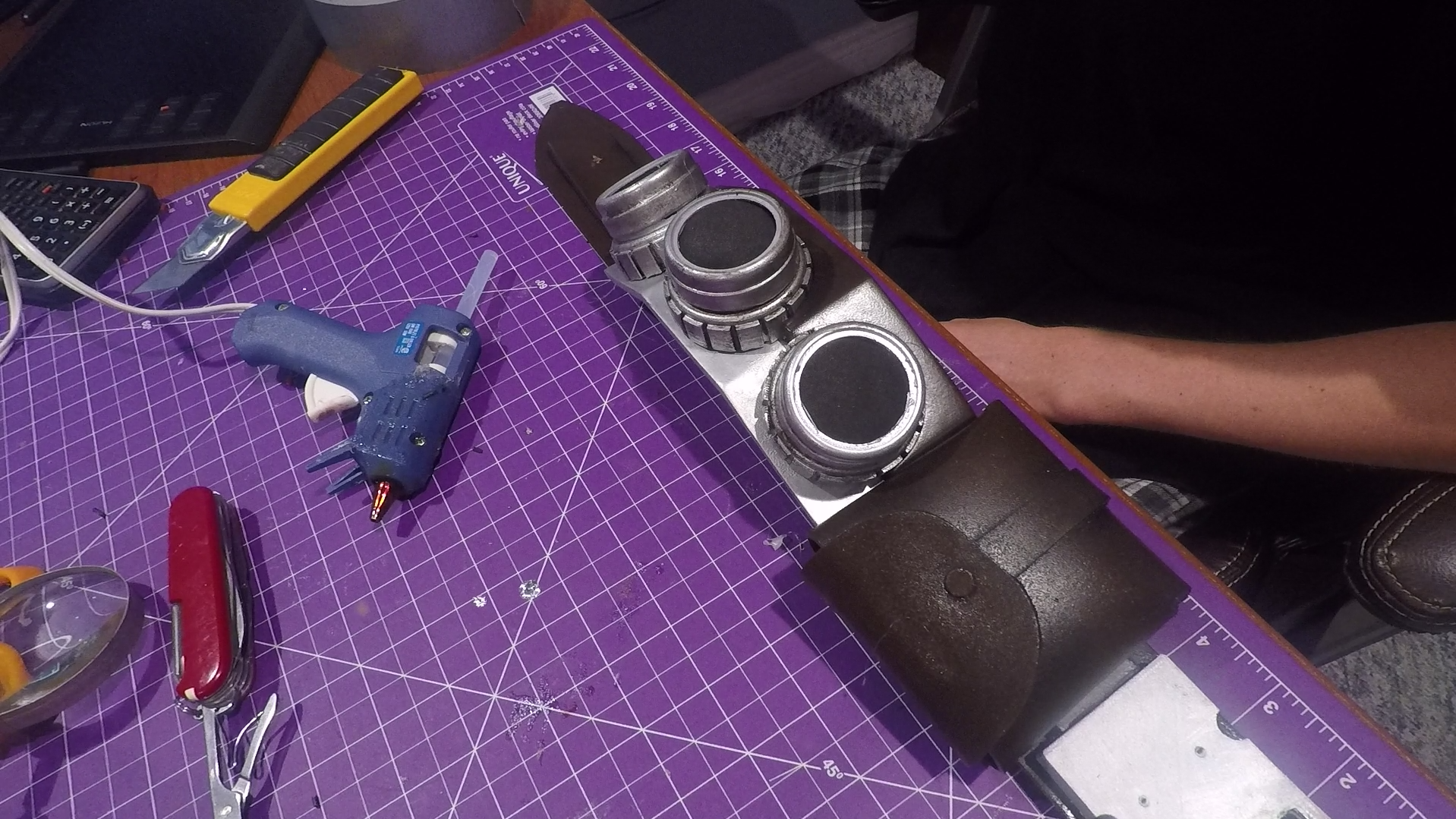 The bandoleer was made the same way as the belt, and it connects to the belt with Velcro. You can see I wrapped some 3D printed bullets in foam and glues them onto the belts. 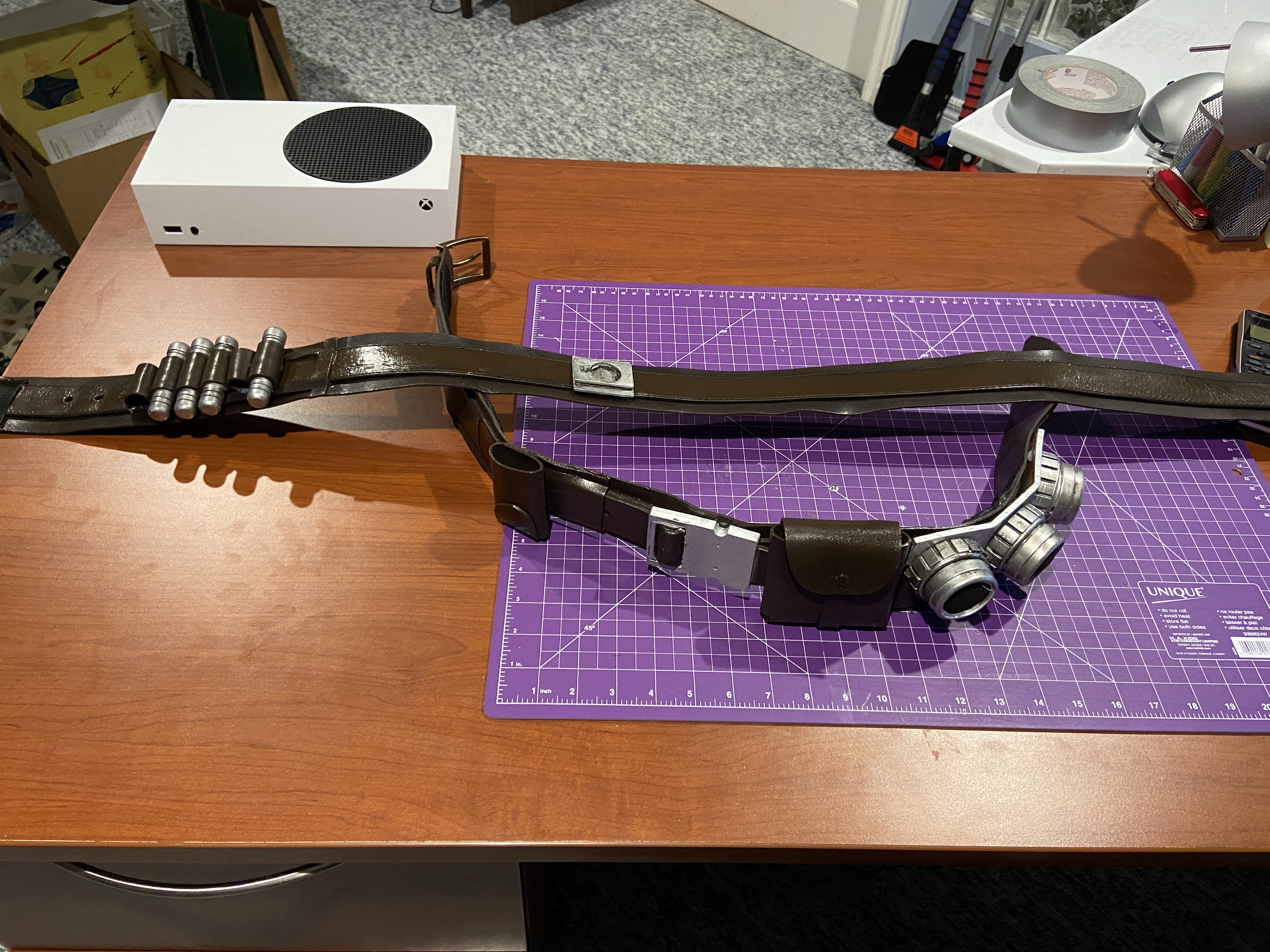 After that I still have to do the cape, and figure out how all the armour pieces are going to attach to the flight suit. And I have to paint and weather everything of course.

I bought two yards of fabric, which turns out to be a piece 189cmx152cm. I just followed along what the Galactic Armory did for his cape. My shoulder width is 47cm, and it's recommended that you add about a foot to that for the width of the cape. Half of 152 is 76, which is close enough to my desired width, and I'll be able to get two equal pieces out of this fabric.

Next I cut out a space for my head. I forget the actual dimensions but I laid it on a cutting mat with measuring squares, so you could find out if you were really interested. 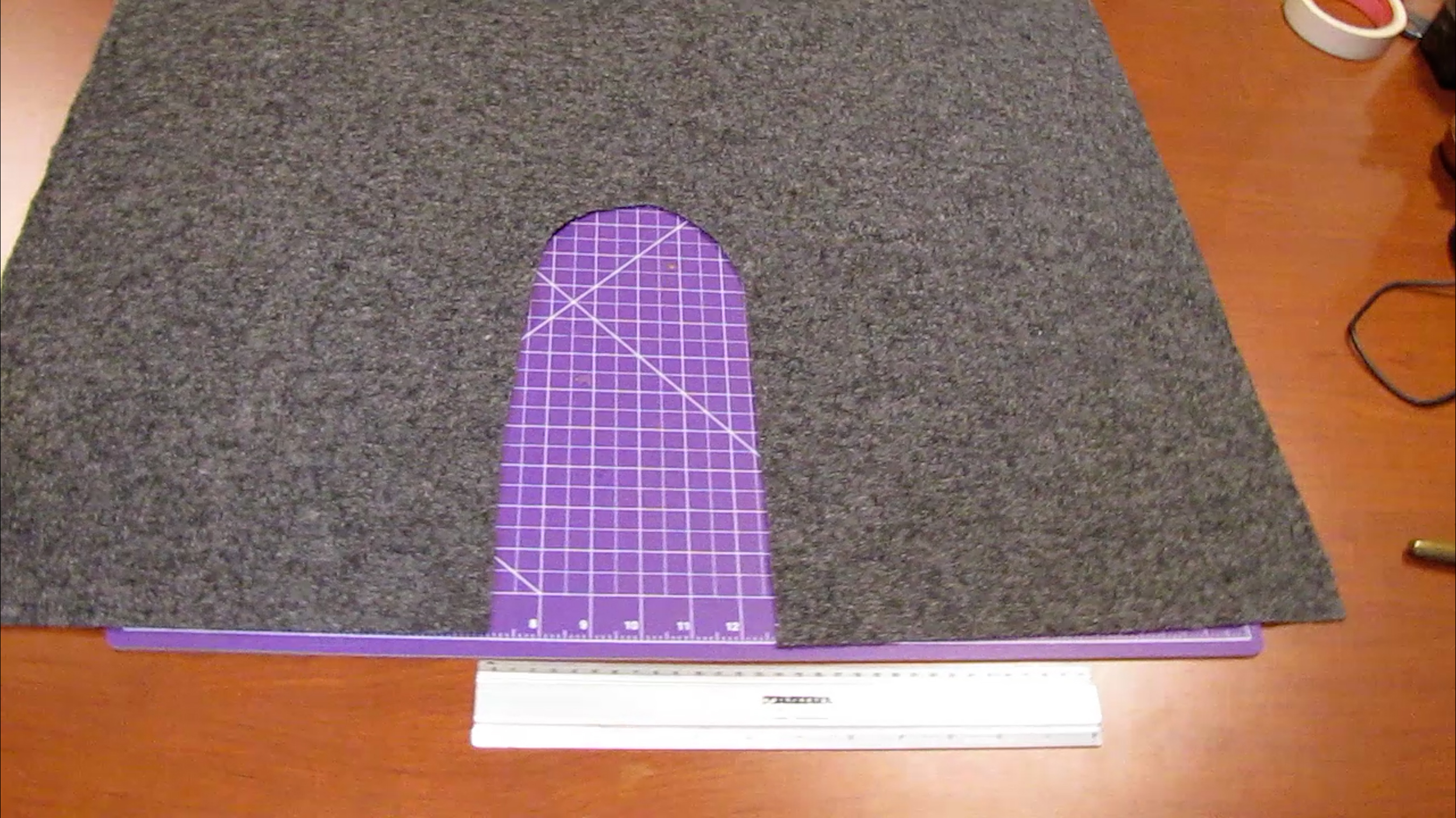 NEXT! I'm sure many people on this site have done what I am about to do. Basically, I followed the tutorial here: The MANDALORIAN- Din Djarin Costumers Guild : Heres our short guide for pleating/draping the cape
to make and sew down the pleats in the cape. I didn't have a mannequin but it's not too hard to just do this on a table. 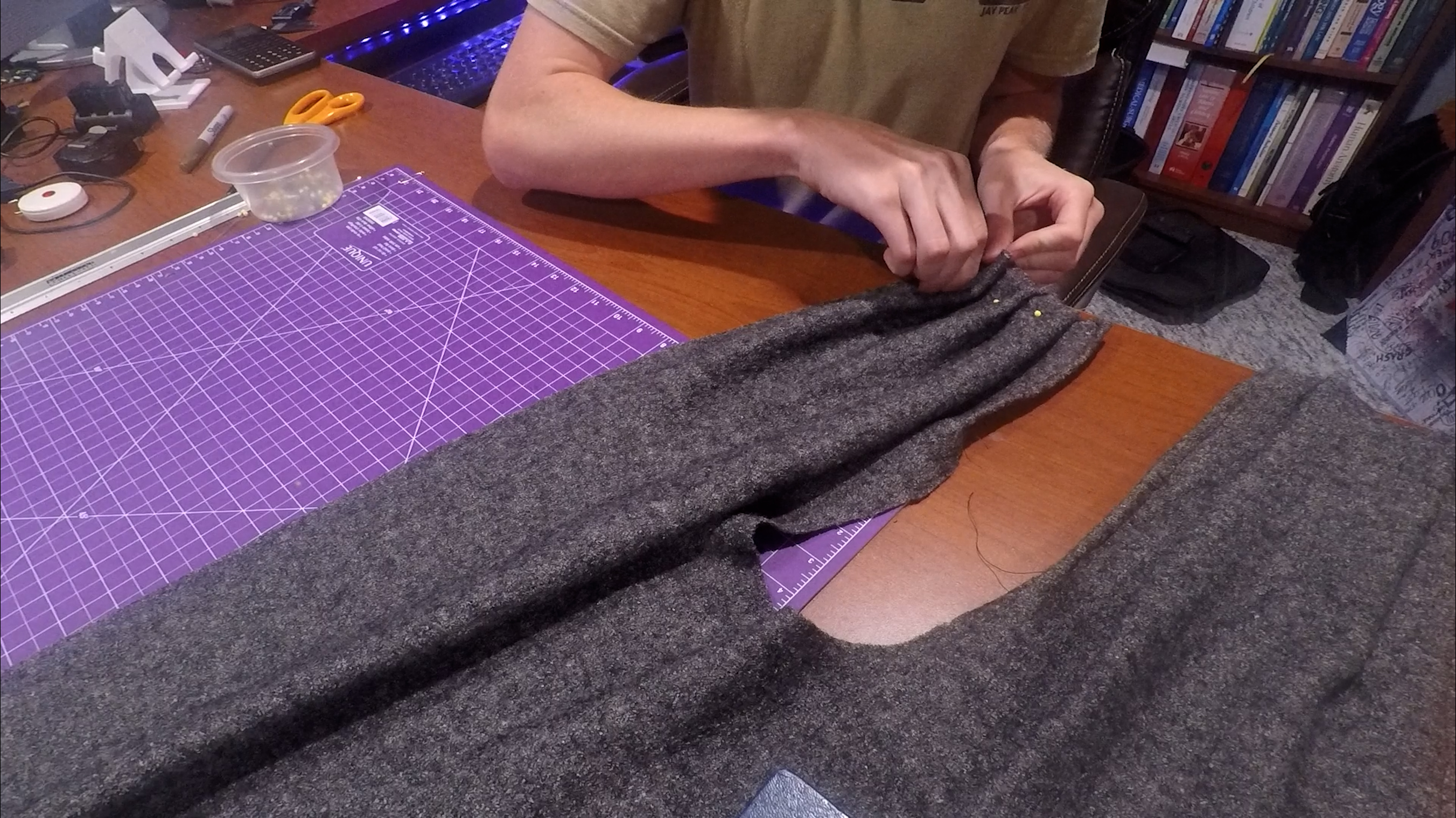 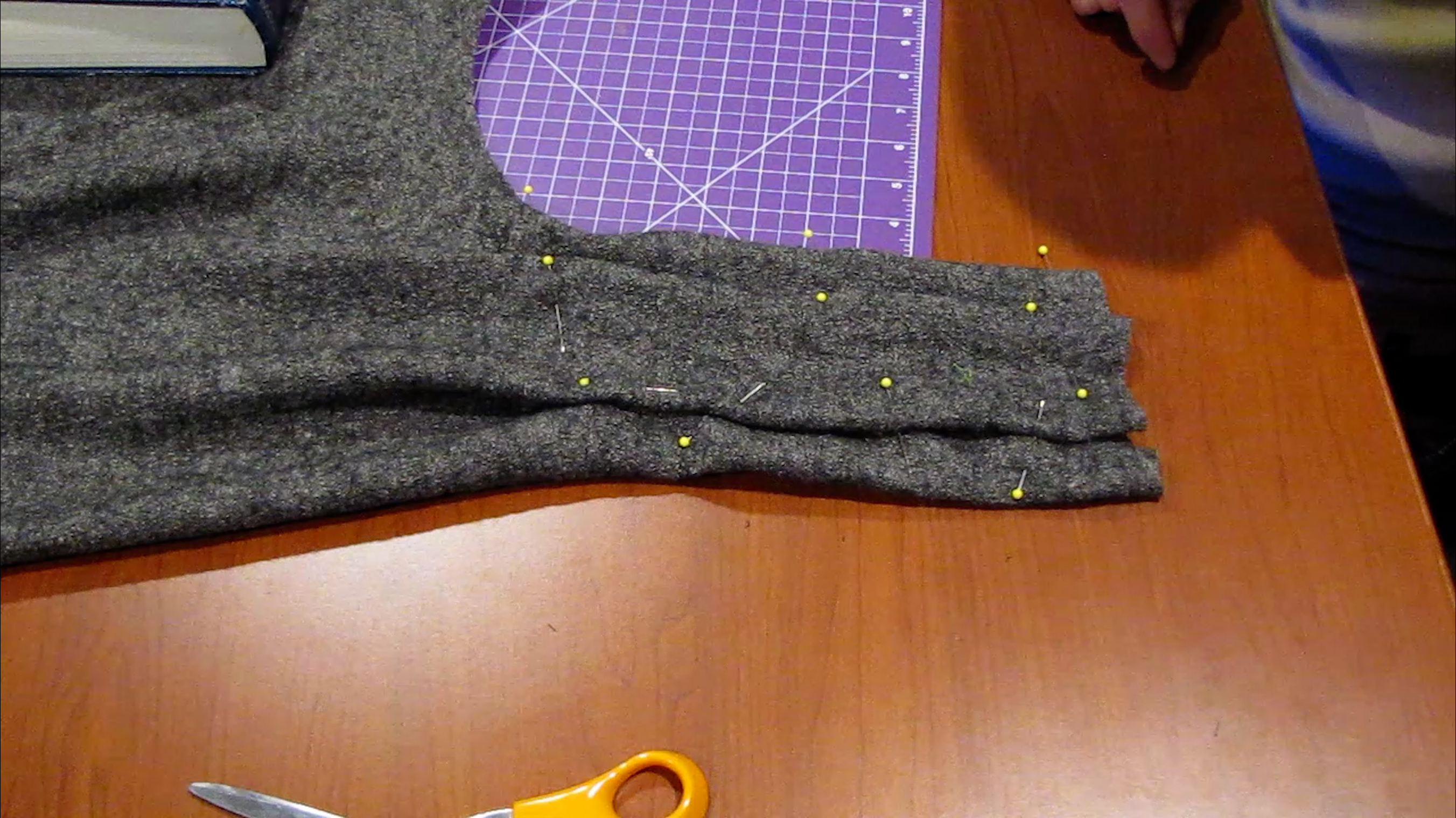 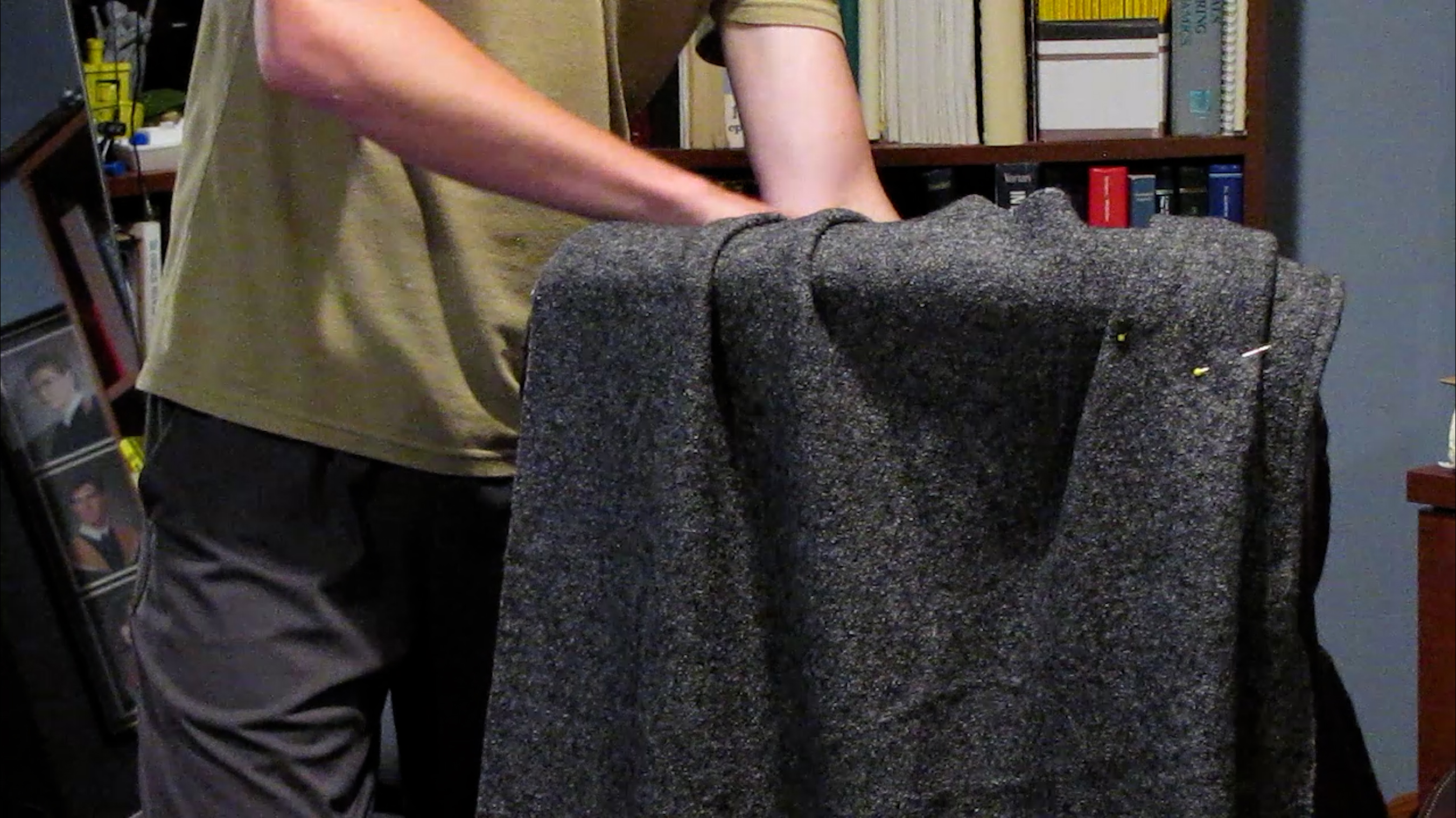 the back of a chair helps too! 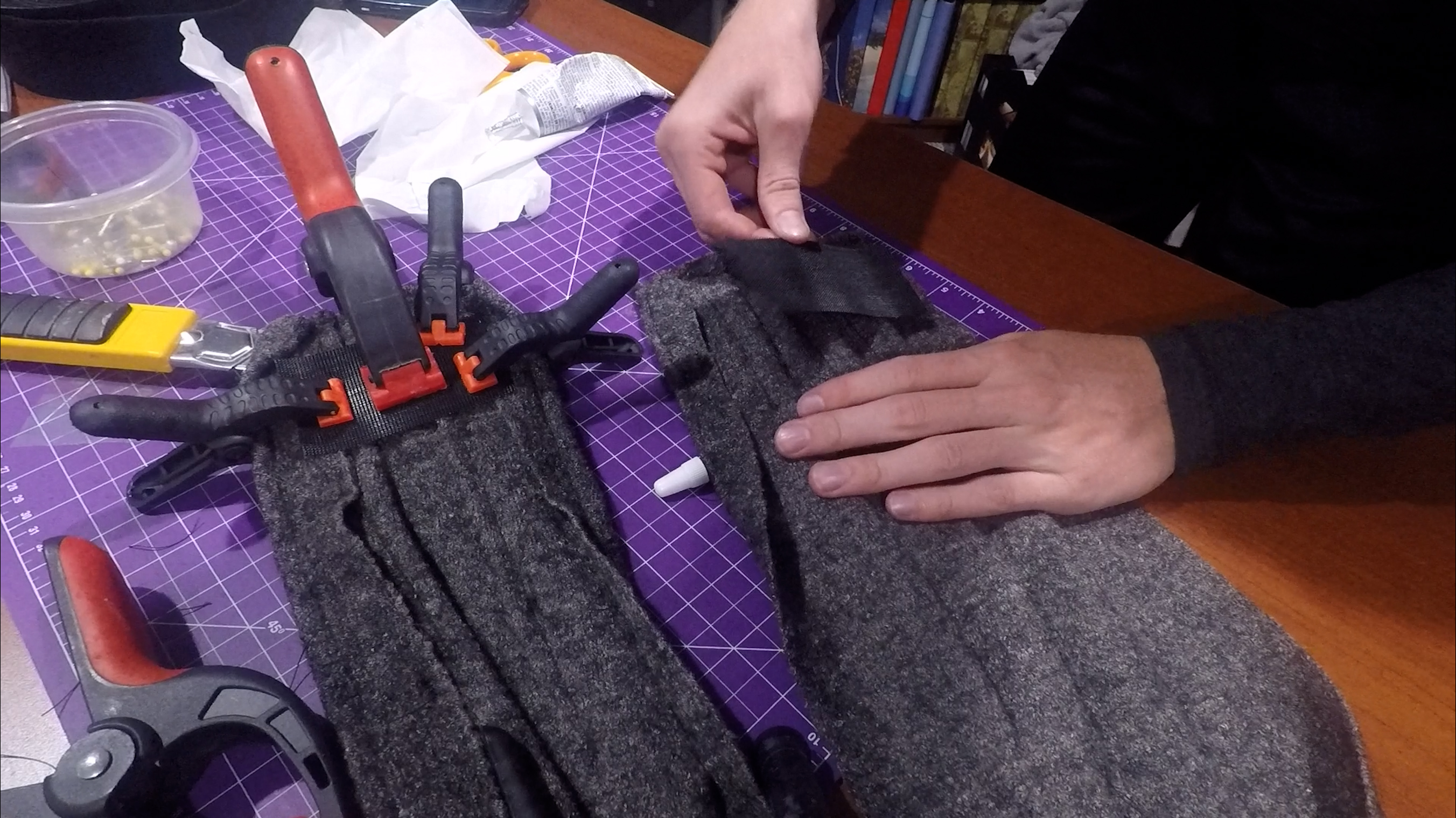 Oh yes and then I used some e6000 to stick on some velcro. I could have sewn these too but I didn't want the stitching to show through the other side.

Then I sewed on some more velcro to the flight suit. 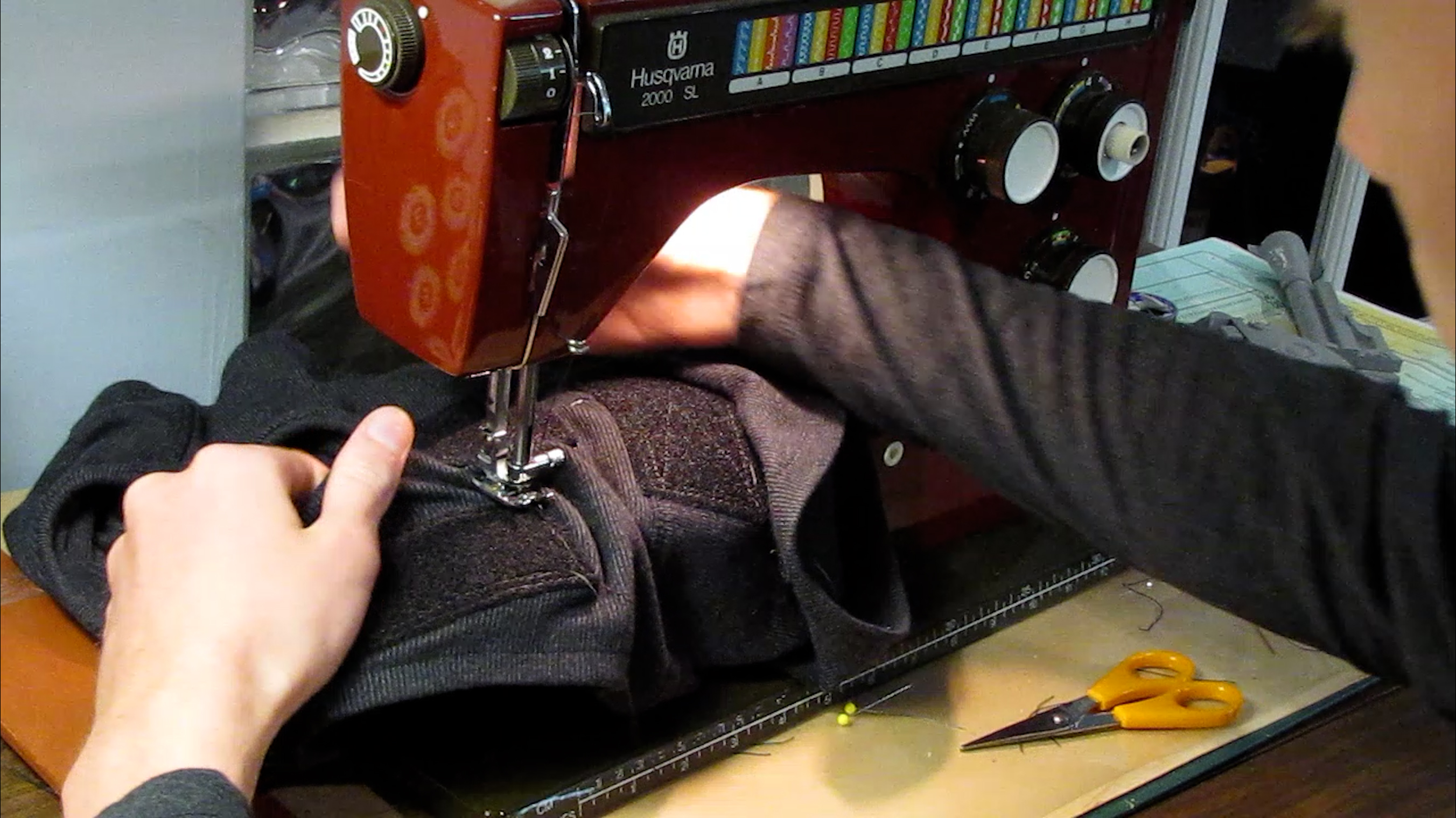 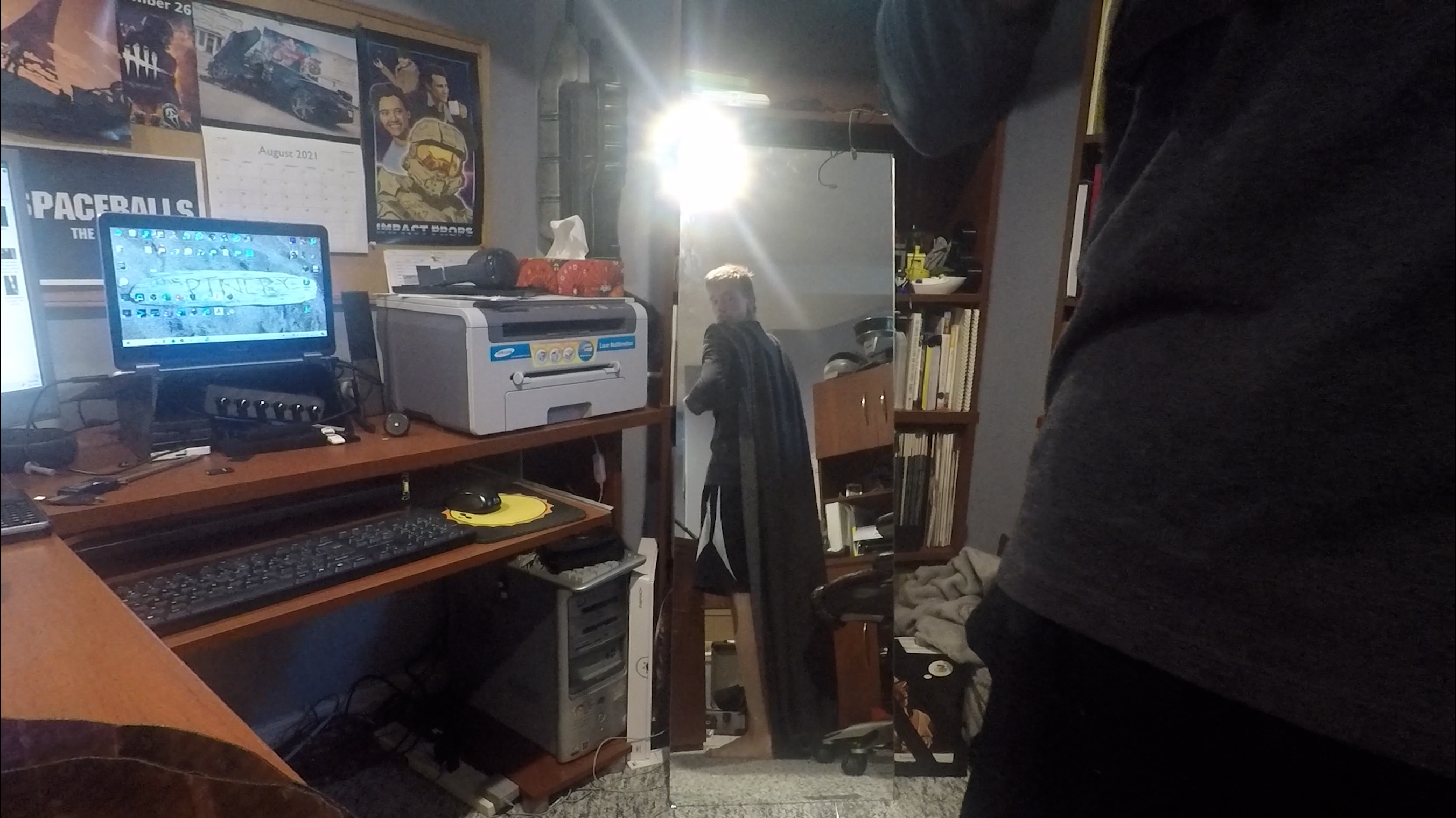 I will make a small modification to the vest of the flight suit. Right now it fits a bit loose, I think a simple cut and addition of some velcro will fix that problem. After that I just have to tie up some loose ends (finish sanding those itty bitty detail pieces, a bit of gluing, OH YES THE GUN!) and then I will be able to paint and start putting it all together!

How I made da lil gun!