Hello all. I've got a progress pic of my armor! 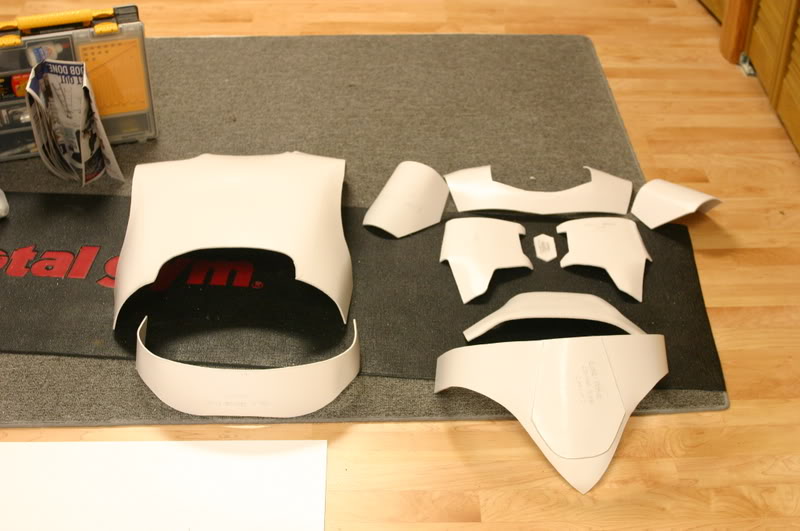 I've still got to sand a round over on the top edges, and cut the lower back armor and cod-piece so they meet up properly. Same for the shoulders on the back and shoulder armor.

Also still have to bondo the codpiece to make a nice transition b/w the thicker center section and the backplate.

Knee armor and gauntlets to come!

I plan to make this guy a kind of scout. Probaby paint the armor forest green with swaths of black, and of course, some weathering. May go with a dark brown earthtone vest underneath, and a black flightsuit. I need to work up some weapons and find a bucket somwhere.

Can't wait to join the ranks!

should check out how valcar did his scout/sniper set, he did a similar paint scheme
good luck on your project, cant wait to see the progress
N

I agree with TantivIV, check out Darth Valcar's thread concerning his armor. It's awesome.

I'm very familiar with Valcar's custom armor. It is great and very unique. I like his color scheme, but I'm thinking of going with more of a bi-tone instead of full blown camo. More like a dark green base with jagged/irregular slashes of black.

I'm also kind of on the fence about leg armor. In my thinking, a scout would prefer as little encumbrance as possible, making knee armor a more agile alternative. I'm probably leaning towards knee on that line of thinking.

I picked up an airsoft shotgun that I want to make over into his weapon. It's the pistol grip kind and comes with a scope and some attachments like a flashlight. I figure I can dissasemble and add an LED for the laser effect, plus work up a folding stock. It would then be compact enough to sling, plus have some ability for recon (scope), but still be formidable enough for serious combat with the stock extended.

I also plan to build a small scabbard for a vibroblade onto the gauntlet on the ulnar side. "Man vs. Wild" taught me never to be caught without a good knife...

Yeah I can understand about the lack of leg armor. Sounds like sort of a recon/sniper =D

How bout tiger stripes for camo? That almost sounds like what your talking about, just do it in 2 tone instead of 3.

Friday we cut 3 more sets of armor - one for my wife, one each for a friend and his wife. Soon the midwest will have another squad of mandos!

I also tried working out the knees based on WOF's templates. While I see how they go together, I don't know that any of us really wanted to put the work into fabricating four sets. Luckily, we know a guy with a vac-table, so Saturday he helped us make a form to vac over. We'll pull some sets later this week.

So today we hope to shape my wife armor, then go for the blaster marks and what-not on mine.

On another note - I think i've abandoned my original thought on paint. I saw some 'hammered' texture dark bronze spray paint at the hardware store that I'm absolutely in love with. I also saw a camo pattern called 'spider' that has basically random straight lines intersecting at various intervals. It isn't a full spiderweb drawn out, but the lines and angles are reminiscent of one. I think I'm going to go that way. I just need to find a color to go with the bronze, which I want to use for the main color of the armor.

The armor looks good, looks like you cut it yourself, and that is very cool.
Good luck with the rest.
N

Jedibrain said:
On another note - I think i've abandoned my original thought on paint. I saw some 'hammered' texture dark bronze spray paint at the hardware store that I'm absolutely in love with. I also saw a camo pattern called 'spider' that has basically random straight lines intersecting at various intervals. It isn't a full spiderweb drawn out, but the lines and angles are reminiscent of one. I think I'm going to go that way. I just need to find a color to go with the bronze, which I want to use for the main color of the armor.

Here's a thread from one of our members that used a hammered bronze on his helmet. It turns out pretty awesome!

That is awesome! Now I can't wait to paint! That's still a long way off though...need to battle damage and make sure I get everything fitted right so I know I don't have to do any more bending.

Clayster, we cut all four sets by hand. Wizardofflight's plans were the basis. I've been propmaking and costuming for a long time now, so definitely wanted the satisfaction of 'forging' my own armor. I'm a bit intimidated by the helmet though...probably look into buying one of those, although I might give Wizard's plans a shot.

Anyway, thanks for the encouragement. Probably look to battle damage it tomorrow, then work on the vest and cape.

So its been like three months since I;ve posted any progress...but here it is!

V 0.5 of my armor. V1.0 will see the addition of gauntlets, a balaclava (sp?), belt and holster for my sidearm, and working electronics for the range finder. 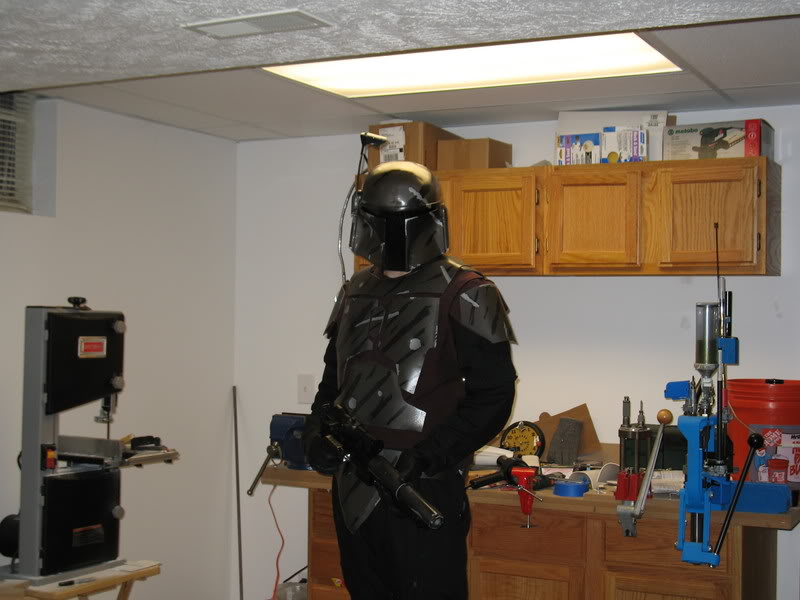 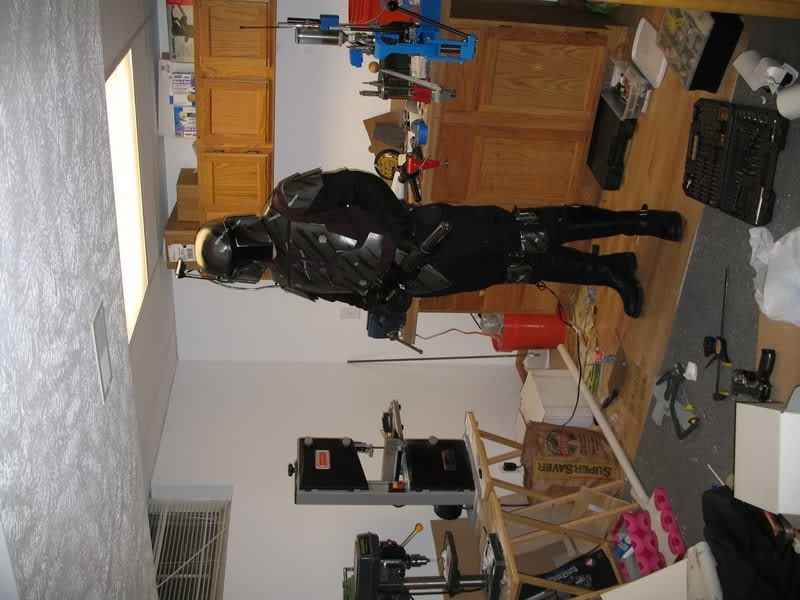 I'd love to see a better picture of the blaster....

Hey, that does look nice! I love it! :cheers
S

Silly question... Is that camouflage or battle damage? If its camouflage I think you need a little more, and if its battle damage, mayme make some run the opposite direction. its just a little too symmetrical IMHO. Regardless. It looks like you did an excelent job with the armour and paint. I love the colors, and the blaster looks deadly.

And a very impressive assortment of tools

looks very awesome! how did you get the armor to stick to the vest? and other parts? Just wondering for ideas as I am about to work on my own soft parts. excellent gun!! looks like you need a neckseal that woul be my only critique. Oh an wow what a workshop.

Thanks guys. It takes a lot of work to put these costumes together, and its great to hear positive feedback!

To answer some questions, I will work on getting a close up of the blaster. Its is an airsoft shotgun that I changed the barrel on, and added a home made collapsable stock. At my feet is a plastic cast of a PS2 guncon controller that I moulded and cast. It's perfect for this period.

The paint scheme is more like war paint than either camo or battle damage. I wanted it all in the same direction for that effect. The silver parts are battle damage. I went lighter on it b/c I picture him as more of a scout/sniper than a front line guy, and therefore he'd see less direct combat than a regular soldier. Most of the time he's skulking around the woods.

I did the layer thing for the paint. After cutting the armor I put the battle damage on, then painted it all silver. I frisketed (latex paint on masking) the damaged area, then painted it all black. I then masked the pattern off using masking tape, and painted it the bronze color. It came out pretty well.

The armor is held on with magnets. Basically I took some silicone glue and glued some magnets on the armor. Then I took another magnet and sewed it on to the vest. It works okay, but it isnt perfect. I had to switch to velcro on the back plate as it would not hold at all. The cod and butt armor are also velcroed on to the flight suit. With magnets they fell off all the time. Honestly, I don't know if I'd even bother with magnets if I were you - velcro seems to be a bit more robust. You could even leave it all attached to the armor when you took your vest off.

The knees are boba inspired pattern that I designed a mold of and vacuum formed at a friends place. I have a velcro pad behind the knees and a velcro strap that goes around my legs.

A neck seal/balaclava (sp?) is in the plans. Just couldn't get there before haloween - not enough time! The workshop is my basement. Its a total pit right now. Four of us - my wife, myself, and our friend and his wife have all been building armor there. Lots of dust, lots of tools, and a huge mess!! worth it though...definitely worth it.

I have a real simple process I came up with for a neck seal if you want it.

Makes it simple to sew, and has the effect of thick, tubed material.

LMK, ill post a pic and a how to for ya.

Post away stormrider! I'd like to see the plans. I had drawn p some thoughts in my head, but I'm not sure its going to work too well.

Ill explain it first, if it make sense kewl, if not ill build a 'how to' in max for you.

Look at my post further down the dented var section '300 + 30 days mortimer heres your $1' theres a pic of me with my helmet off. Thats what the neck seal looks like when sewn.

What I did was took 2 layers of fabric.

sew the velco on at the ends. I suggest under piece Hook, out piece (facing neck) wool, so its not scratchy.

If this doesnt help, ill take some pics for you.
With a sewing machine takes like 5 minutes.