For The Body
Start with a base coat with the Aluminum
Mask off the areas you don't want painted.
I did them in this order;
White, red, yellow, blue
make sure all areas that aren't to be painted are covered.

The "white" is a base of Almond with white misted over it .
I didn't want the white to be blinding.

The "yellow" is a base of equip yellow with orange misted into the corners.

The red & the Blue are straight out of the can.


I had some problems with the yellow peeling back off.
The Tape was not on the yellow itself, but was masking the other colors.
When I peeled the tape off after painting the yellow, the yellow peeled up around the edges.
Here's what i did to fix it;
I used the masking tape to peel all of the yellow back off
(that's right ALL of it)
I then sanded the silver & painted itwith the Sun Yellow as a base.
Then a coat of The Equip Yellow .
Then misted the Orange.
After it was painted, I used an X-acto knife to score along the edges of the tape to prevent any other peeling.
no problems after that.

For The rocket
I sprayed the whole thing silver
masked off some spots on the top half
misted the Burgundy spice from the middle up to the top, getting lighter as it went.
taped it off & sprayed the white/almond on the bottom half
removed the tape
then I misted the Walnut from the middle down, painting a little up onto the burgundy section.(this isn't 100% accurate, but I like it)
Then misted the flat black over MOST of the walnut
make sure you leave some walnut showing (see MOM ref pics)
Then scrape a little of the black back off & some of the burgundy as well to show some damage
After this was all dry, highlighted some of the damage with silver model paint & a fine brush.


For the Thrusters
I sprayed a base of silver
Then the White/almond
I then taped off the stripes & sprayed them flat black
after drying , peel the tape off & mist with the Classic Grey
I then sprayed flat black into the cones & misted around the bottom edge to simulate exhaust
I then misted the thrusters with a nearly empty can of black so that it splattered & specled the thrusters.
I then painted the insert details with balck
Then a coat or 2 of Dullcote

I'll post some more pics & an update after weathering the body 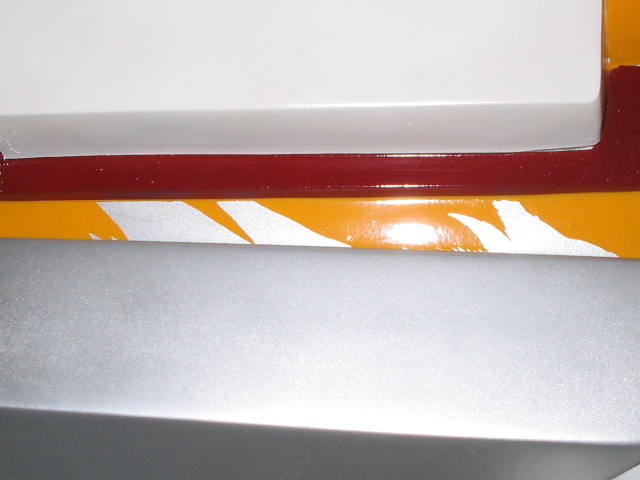 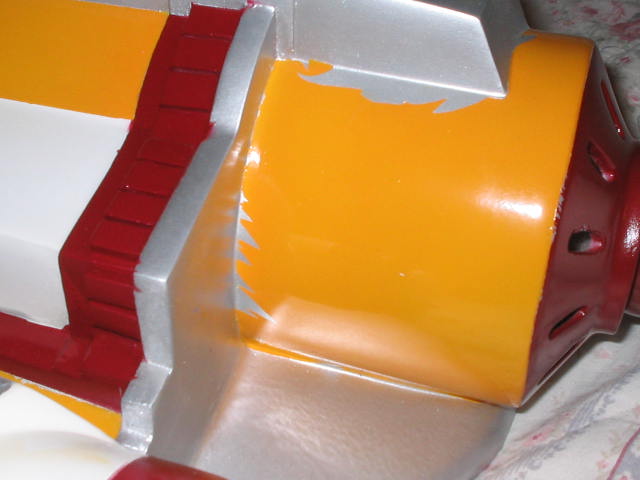 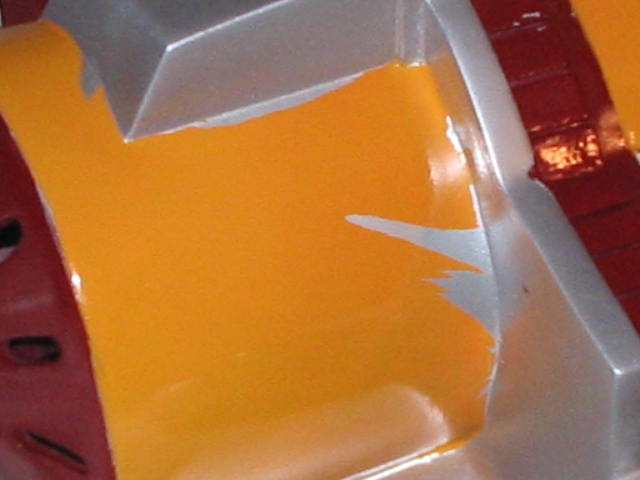 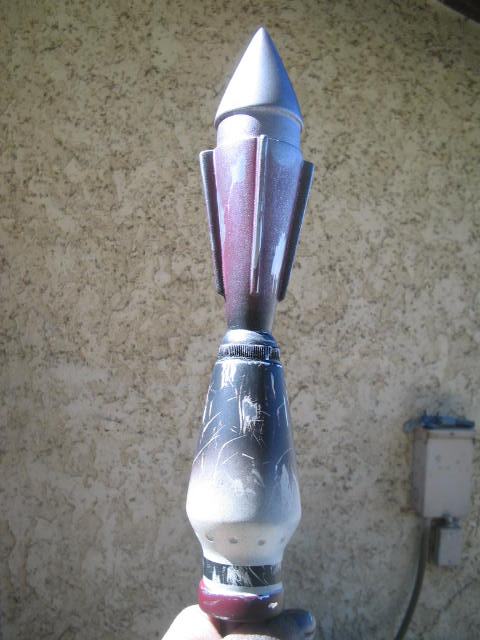 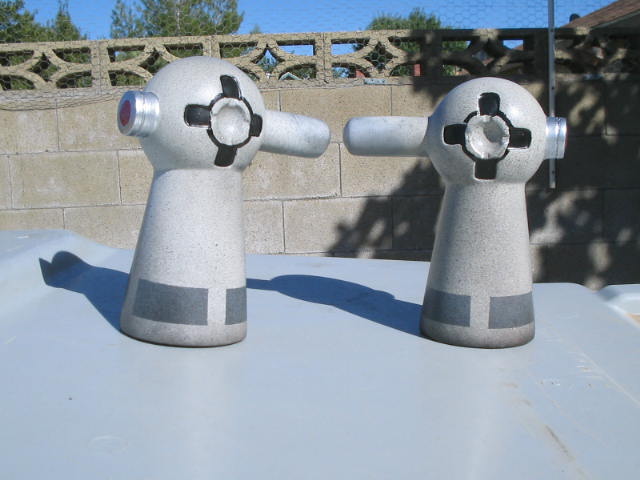 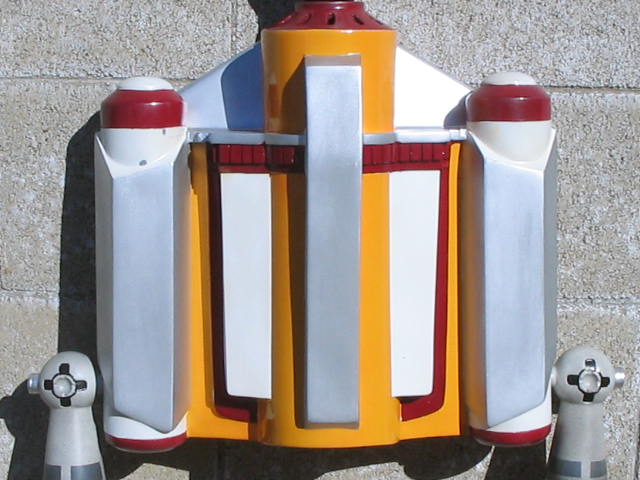 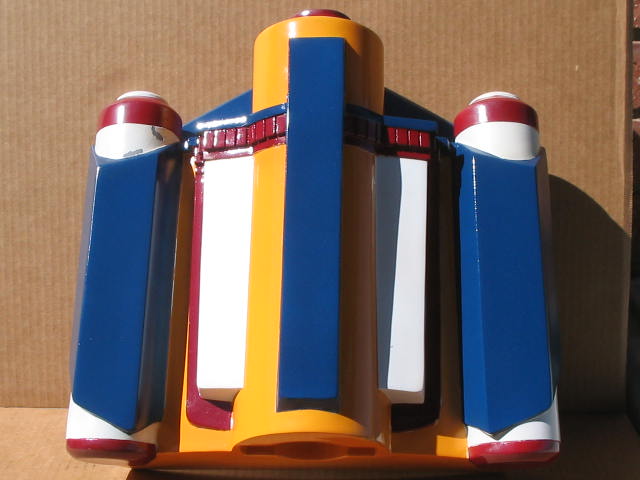 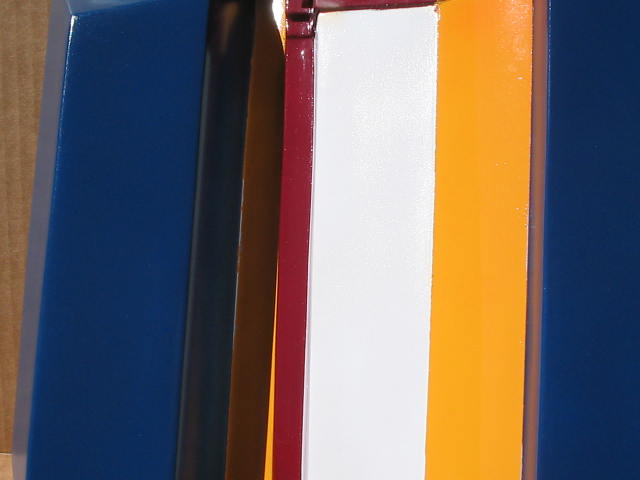 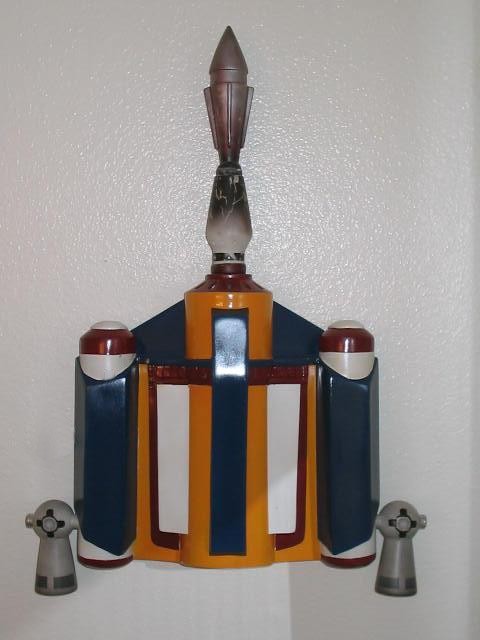 Looking very nice. That rocket is killer!
Last edited by a moderator: Jul 24, 2017

Oh sweet! I was hoping to get in on a good tutorial for the pack. I am starting mine tomorrow so expect a lot of questions! LOL BTW, Looking killer! Oh and if you had it to do over again, would you paint the pack in the same order of color?
Last edited by a moderator: Jul 24, 2017
S

Pavespawn said:
Oh sweet! I was hoping to get in on a good tutorial for the pack. I am starting mine tomorrow so expect a lot of questions! LOL BTW, Looking killer! Oh and if you had it to do over again, would you paint the pack in the same order of color?
Click to expand...

NO!
I think the yellow first, then blue, then red, then White.
Almost backwards of what i did.
Or maybe white before red
But definately yellow first
Last edited by a moderator: Jul 24, 2017

Okay. I have not been able to find the Farm Equipment Yellow around here so I may have to go with a Polly Scale enamel.

Pavespawn said:
Okay. I have not been able to find the Farm Equipment Yellow around here so I may have to go with a Polly Scale enamel.

I found a can of Equipment Yellow made by ACE hardware today. It says on the can the it matches with Caterpillar yellow as well. I'll see how it comes out.
Last edited by a moderator: Jul 24, 2017
S

here's we it sits as of today.
I put on the decals (thanx Alan)
Airbrushed the tan "dirt" on the body & thrusters (Tamiya "Flat Earth" # XF-52)
Then did a wash of el cheapo black acrylic craft paint mixed with windshield washer fluid.
The wash was a horrible mess.
I discovered something while doing it (well it's new to me);
Inevitably , you will get balck streaks from the wash running were it's not wanted. I found that if you spray Windex on a rag & rub it in, the streaks will blend out. You may have to re-wash that area, but at least there won't be any runs.
here's some progress shots,
first just the flat earth, then the wash 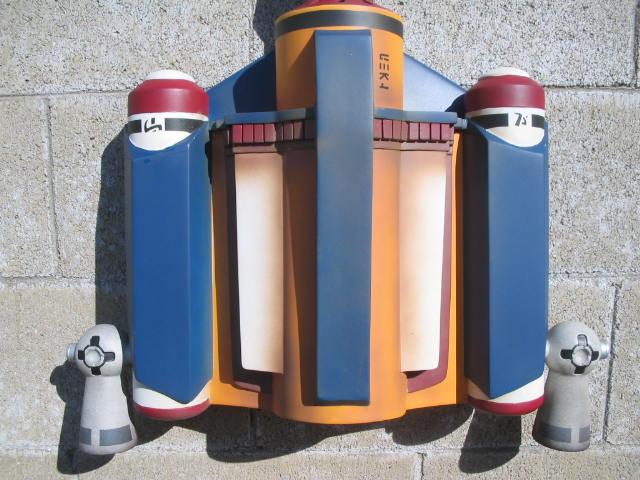 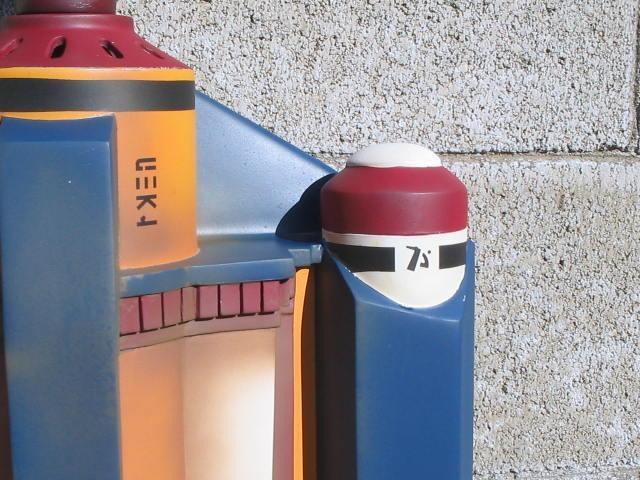 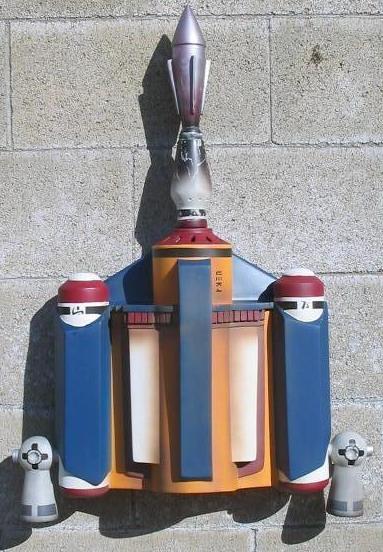 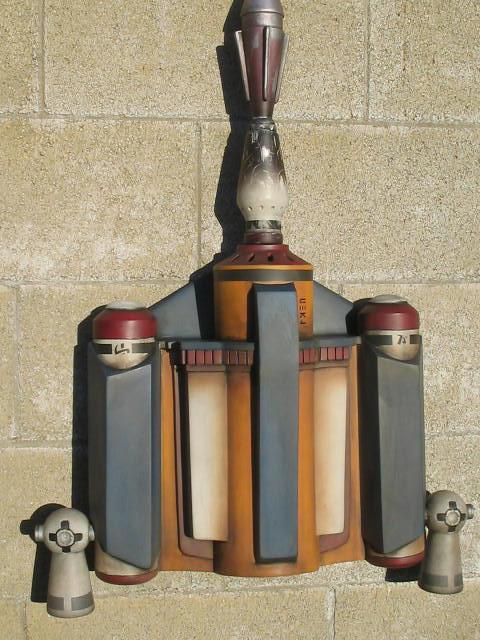 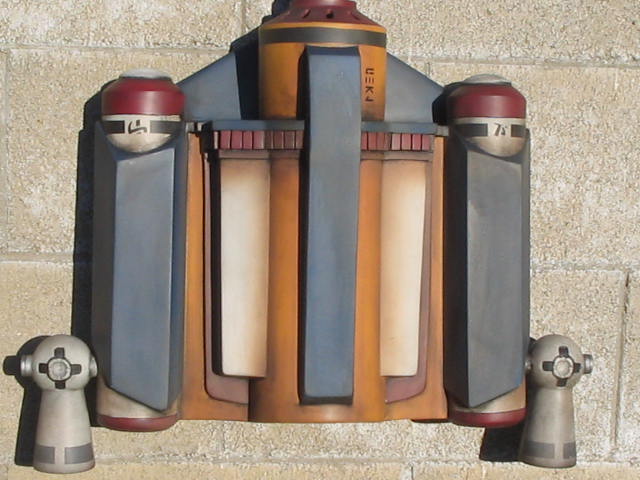 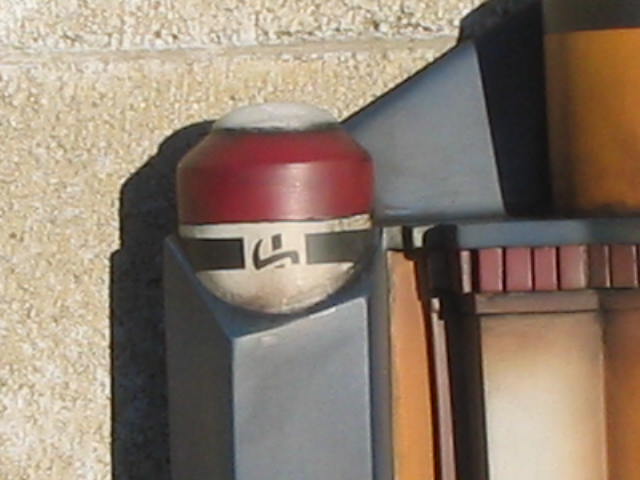 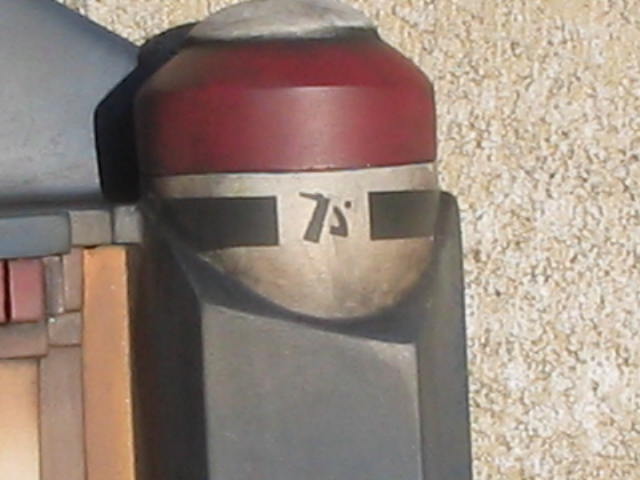 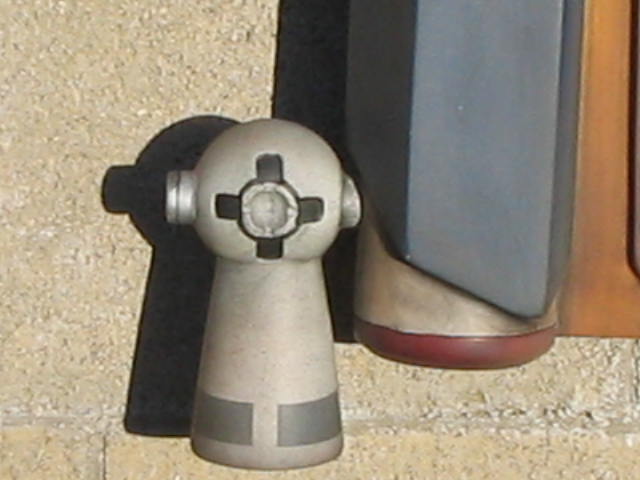 Looking great! Glad to see those decals came out so good!
Last edited by a moderator: Jul 24, 2017

That is too cool and a beautiful job!! I love it. I'm pleased that the decals worked out.

Thank you for posting your progress pics.

Lookin beautiful so far, keep up the good work
Last edited by a moderator: Jul 24, 2017

I think I just fell in love with multi-coloured dirt layers... damn, after trying that on my bucket I loved it!!

Wow, accolades from the maker.
I'm doing the "scratches" today, wish me luck.
Last edited by a moderator: Jul 24, 2017
S

I'm a Jackass!
I didn't follow wizaroflight's instructions & put the wrong decal on.
I then tried to remove it & screwed up the paintjob.
then, I masked it & tried repainting it.
Got impatient, tried the heat gun to help the paint dry faster.
Got too close & bubbled the paint.
Here it is after I fixed the bubbles & painted AGAIN. 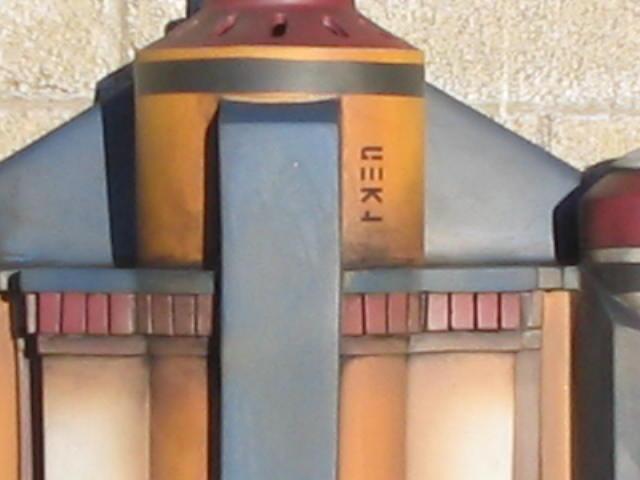 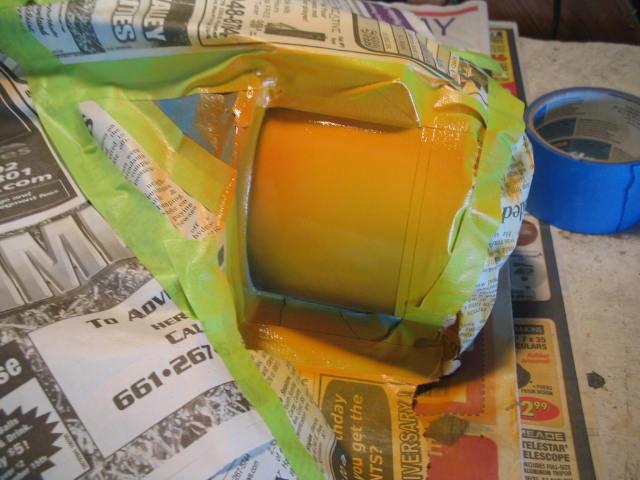 hey, just imagine if you got the whole thing done and THEN realized you had the wrong decal.
Last edited by a moderator: Jul 24, 2017
S

not as good as before, but ok.
I also included the bottom shot 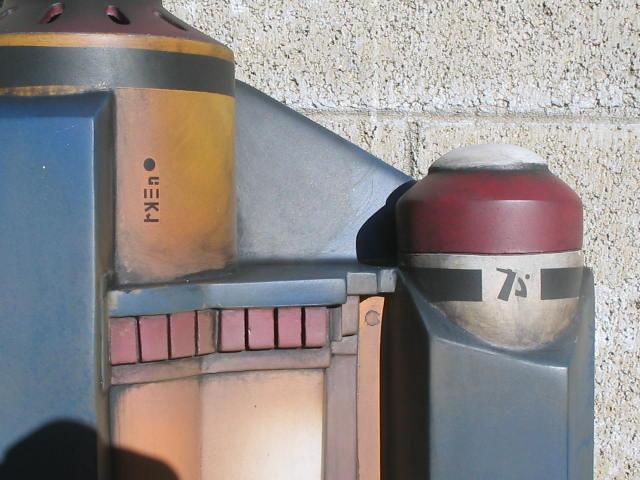 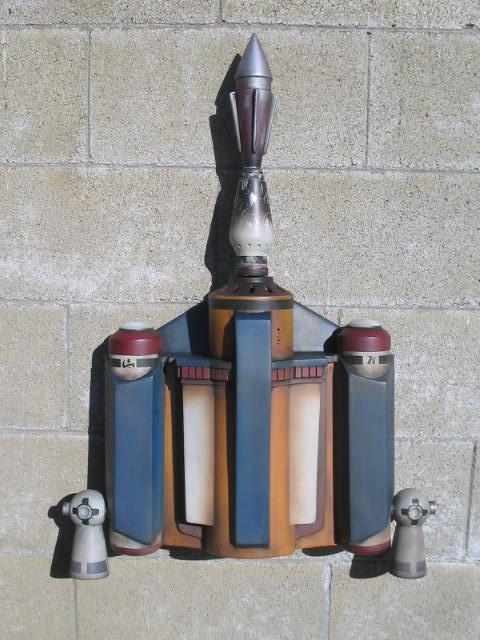 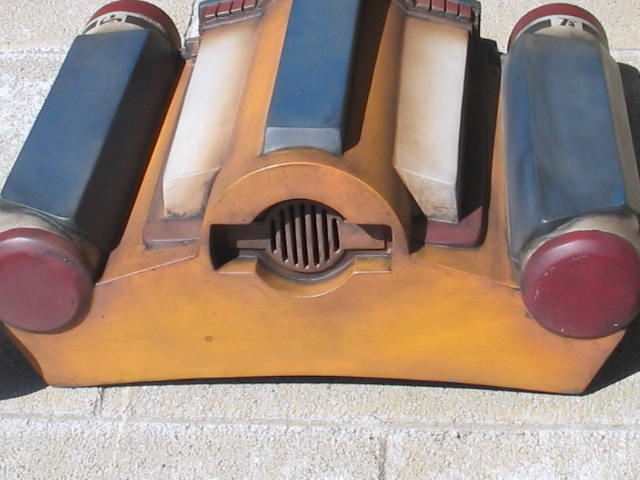