I recently purchased the Master Replicas Boba Fett blaster. Before doing so, I searched and searched for in-depth reviews of it, and I basically came up empty, so I figured I'd make a review of my own for anyone looking to purchase one in the future. I took a rather large amount of photos of it, took measurements, and even borrowed a HyperFirm rifle for comparison.

My rifle set was missing two pieces. First and foremost, it was missing the acrylic rectangular cover for the display stand. The listing specifically stated that this part was not included, but this didn't worry me, because the price was good, and I figured I could have a replacement cover made for me at some point, if I desired. The other piece that was missing was the small display stand for the Master Replicas name plate (the metal plate itself was included). This didn't bother me, either. Other than that, the set was complete with the documentation, the display base, and most importantly, the rifle.

My first impression, as I'm sure is true for anyone who has one of these, or has held one, is the weight. It's a BEAST. According to my weight scale, it comes in at 11.7lbs., and honestly, you can feel every bit of it! There are times where the weight of an item adds to the overall feel/realism, and other times where the thing is just HEAVY. I think that with this piece, it is a mixture of both. Most of us are putting together our costumes to troop in at some point, and to that end, I think that this piece will turn alot of folks off. Personally, I wouldn't mind it, but then again, I've never trooped before. One thing is for sure: you won't be swinging the rifle up to your hip as Boba Fett did when Boushh revealed his thermal detonator.

After the first impression, you can really get to admiring the gun. It is truly a beautiful item. The lines are very sharp and detailed, and the paintwork, though not perfect, is pretty damned good for a mass-produced piece. Upon close examination, the mass-production evidence is clear, but from foot or two away, this rifle is absolutely stunning. The display stand cradles the rifle perfectly, and features a mirrored base, making light dance beautifully upon the gun from below.

As far as accuracy, the supplied documentation contends that the replica rifle was laser-scanned from a screen-used original piece. From examining the Gallery pictures, it looks like this was the piece used: 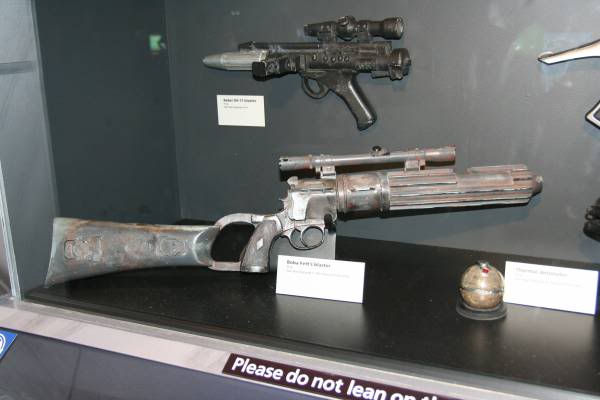 The three biggest reasons for believing this have to do with the screws on the backside of the rifle stock, the modified T-track rail on the underside of the barrel, and the differing lengths of the two short T-track pieces on the forward end of the barrel. All of these details have been recreated faithfully on the Master Replicas rifle. That said, I believe it is common knowledge that all of the ROTJ rifles were cast, so one would believe that the Master Replicas rifle could have been cast from any surviving piece, save for the stunt/pyro/foam blasters such as the one displayed at the AOSW exhibit (which, coincidentally, does not appear to have either the rifle stock screws or the differing lengths of the forward T-tracks). 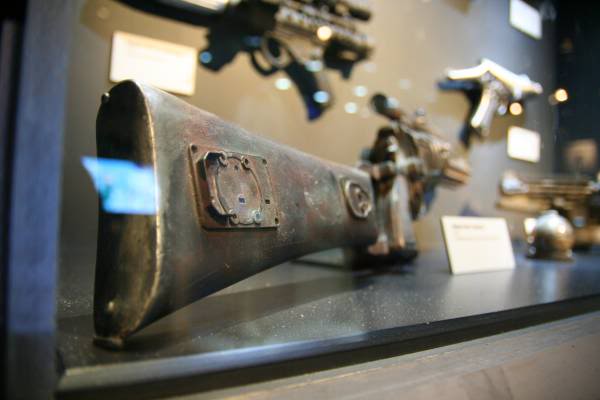 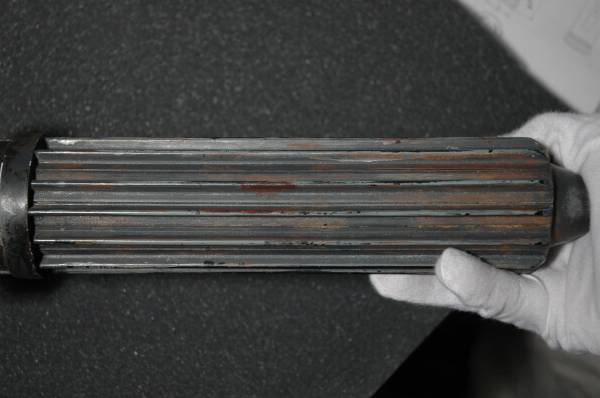 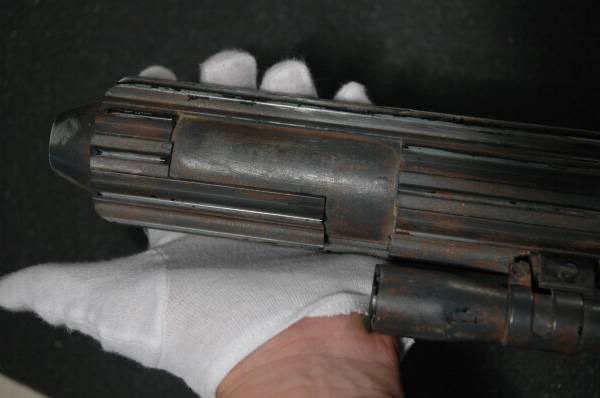 Regarding the weight, one would think that the rifle is front-heavy, but I believe that this is not the case. It certainly feels like the barrel is mostly plastic, and according to the documentation, the stock is wood, leaving the grip, chamber and scope. I believe the parts are not only metal, but SOLID metal, with the majority of the gun's weight being slightly forward of the wrist, making it feel like it is, indeed, front heavy, though it's really not.

The scope itself is quite interesting. I've never seen/held the ASI 4x20 (if that is, in fact, the part used), but the screen-used piece appears to be different from the reference scope that Master Replicas themselves used, seen here: 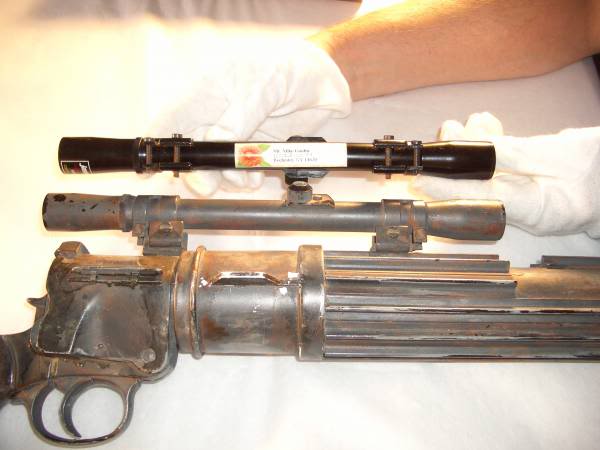 Things got REALLY interesting when comparing the Master Replicas to a HyperFirm. The proportions of both differ greatly. Since I don't know the origins of the HyperFirm mold, and I haven't received permission from it's creator to post my in-depth comparison photos, I'll just post a few of the overview shots. The HyperFirm rifle is shorter, the scope is longer, and the entire barrel assembly is much different in it's dimensions: 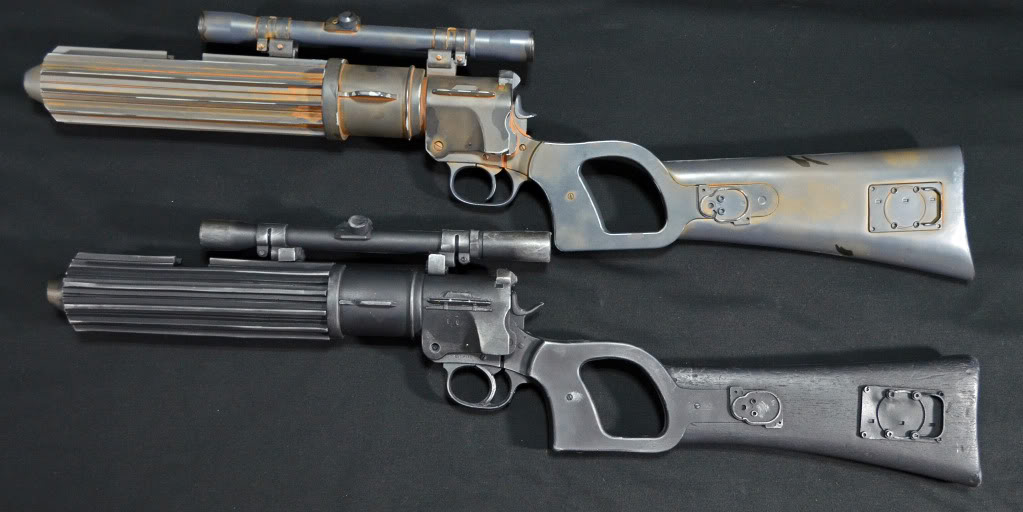 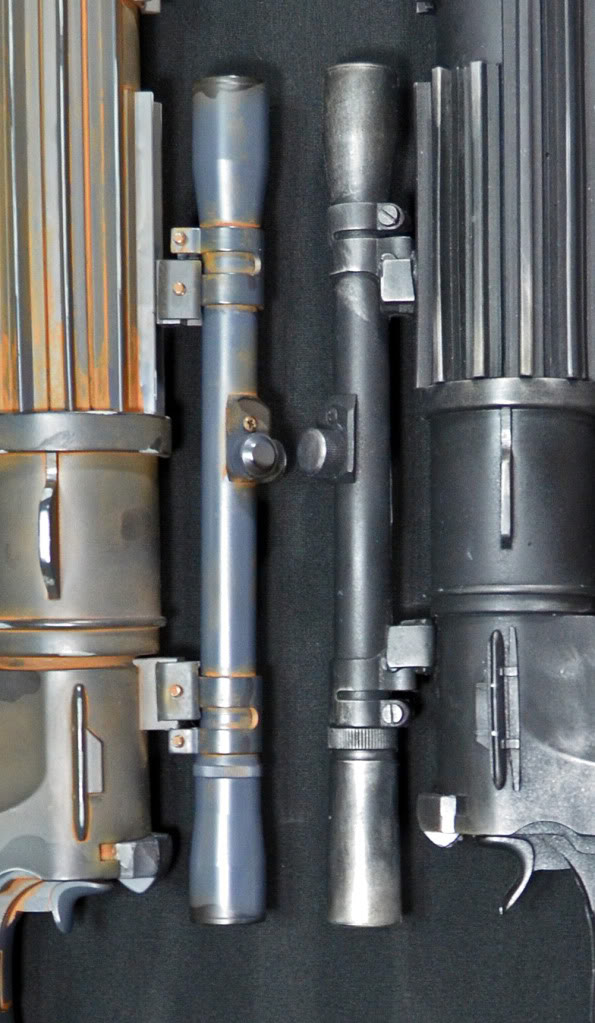 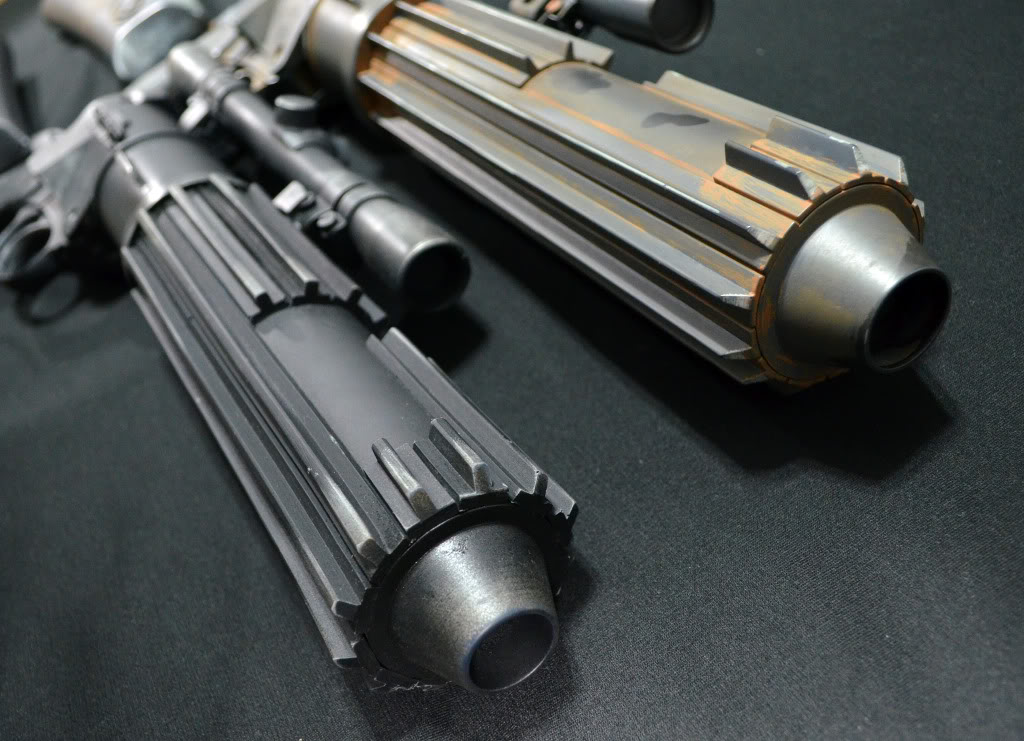 That said, which is the more accurate? I want to think that it's the Master Replicas version, but we know that the Master Replicas ESB helmet was upscaled by about 12%, and we know that George Lucas is paranoid when it comes to exact replicas of screen-used items. I have no real way to know, other than the fact that both of the grip assemblies of the Master Replicas and the HyperFirm certainly appear to be exact in their respective dimensions, though the rifles stocks are different, in addition to the barrels.

Anyways, it's a wonderful piece, and I'm so very happy that I was able to get one. Hope this wasn't too much of a bear to read!
Last edited by a moderator: Oct 2, 2012

Great write up Ryan!! I will have to say it is a nice replica but there is no way I would be caught dead trooping that thing as it weighs a ton!!!

Excellent review and comparison photos! I'm sure this info will help a lot of people to decide what is best for them. Good job!
L

I had a feel with that one on a troop last winter. It sure weighs a ton! I'd never manage to troop with something that heavy.

Nice review thanks for the read 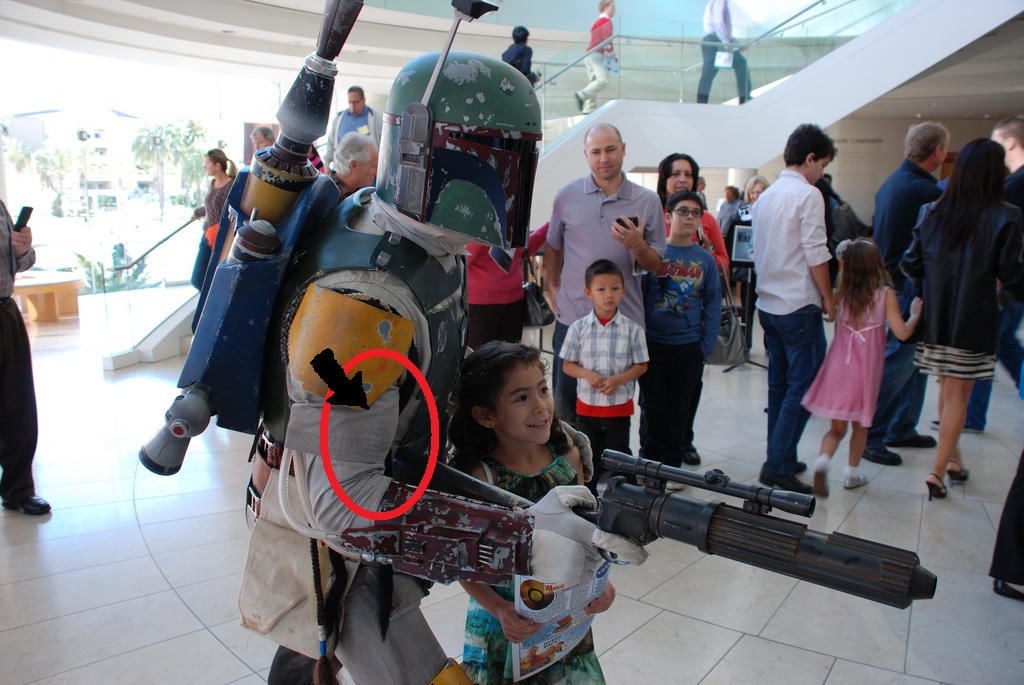 Sorry to rez this thread guys! But I wanted to share my own comparison pics on this topic.

A few months ago I bought a Hyperfirm made by Sci-Fire in 2007. I love this piece and its going to be fantastic for trooping!

A few weeks ago I made a deal with TK231 to acquire his ROTJ EE-3 made from the Bronze Webley replicas made available by a TDH member. Here the shot that makes this more interesting: 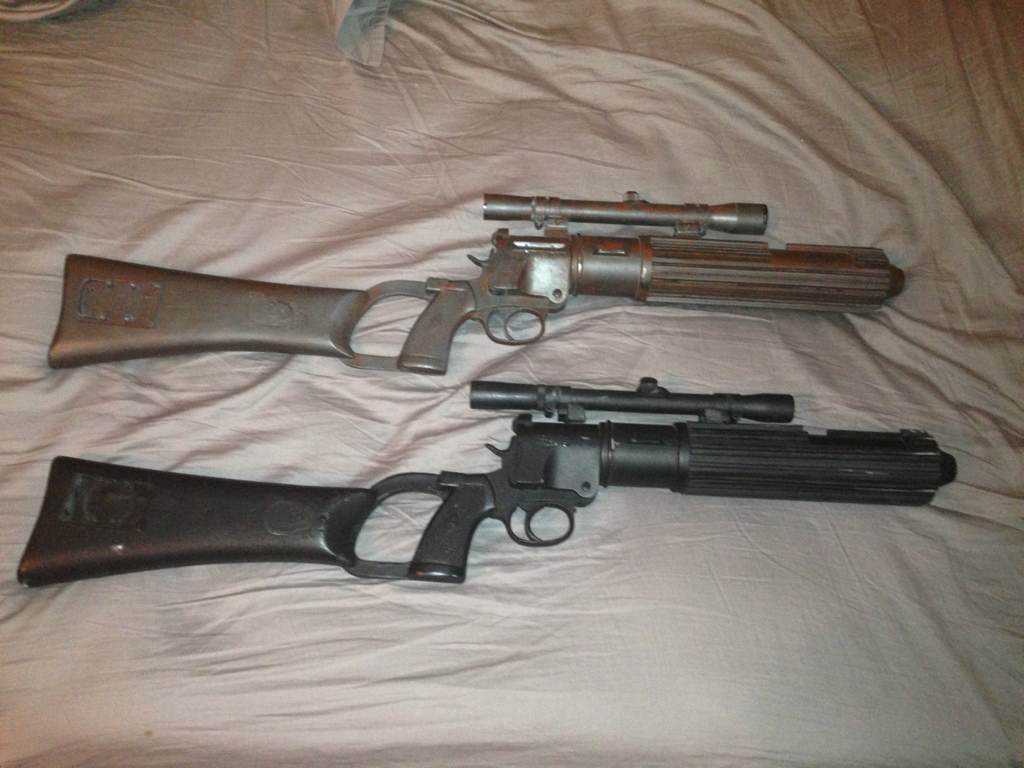 I apologize for the phone pic, but when I hold these two pieces up side by side the Hyperfirm is only about a half inch shorter than my H-S.

So the question is, has the Hyperfirm mold shrunk over the years in terms of barrel length? Or did MR change the dimensions of the EE3 in production?
P

I'm curious to hear from people that have used/held/owned the MR and others. Aside from being heavy, what did you think about the MR? I'm still thinking my way through which blaster to chase. I expect to do a small amount of trooping and keeping at least the helmet and blaster on display.

Assuming I'm not overly concerned about the weight, it seems to me a crowd or child would respond better to the touch of a metal barrel (please correct me if the MR fins and barrel are not metal). I’m also assuming this metal will resist damage, although not as much as a rubber blaster.

The other guns have the following advantages and I'm not sure if they outweigh the above:

-Sidewinder is a great paint skills so you can get a good resin gun painted for a reasonable price He also actually responds to PM/threads quickly and so is a known quantity (I know we hope Stormrider to return to business as usual soon )
-Stormrider with a wood stock and using a real scope for is pretty **** cool, especially for the kids, but here again I'm concerned the kids will touch rubber/plastic and lose some of the magic. His gun is also very accurate and tough (reinforced rubber) and possible easier to modify then the hyperfirm?
-Hyperfirm seems to be unbreakable and accurate and as I understand it reinforced with metal. Is there enough metal so the barrel or stock is not wonky and can’t be bent?

Thanks all for helping me think this though.

I went with a Sidewinder. Not only is it the more budget friendly alternative, it's because it's lighter that I went with it.

I haven't trooped before, but I would imagine carrying a Master Replica that weighs 11.7lbs for hours on top of all your gear would not be pleasant. ESB maybe - at least you would have a sling you could use

I totally agree with you that a light gun takes away the believability of the prop - at least it's the right size though. It's just another piece to the costume that you just have to look out for. But that's why I would just hold onto it the whole time and not worry about it. 1) You're keeping your prop safe, and 2) There's something about handing a realistic gun to a kid that I'm not overly a fan of.

If you're torn between the three, I'd go for a hyperfirm. From what I've read, they are a lot stronger - and more expensive. But you may have to wait a while for one.

Good luck with your decision!
R

pmalfonso said:
I'm curious to hear from people that have used/held/owned the MR and others. Aside from being heavy, what did you think about the MR? I'm still thinking my way through which blaster to chase. I expect to do a small amount of trooping and keeping at least the helmet and blaster on display.

Assuming I'm not overly concerned about the weight, it seems to me a crowd or child would respond better to the touch of a metal barrel (please correct me if the MR fins and barrel are not metal). I’m also assuming this metal will resist damage, although not as much as a rubber blaster.
Click to expand...