Su'cuy everyone! Hi, I'm rather new, well, I've been a lurker for a couple of years now so it's about time I say hello. Now at least that I feel I'm serious about starting this project.

These are the concept drawings so far for my custom Mando, Lizean Akai. She has an entire detailed back story if anyone's interested. But for now I'd like to discuss my plans for the armor/costume. Which will be of the more heavily armored variety, her tools of the trade almost always surround a big bang and shower of dirt. (Aka, she dosen't really enjoy handling smaller firearms, but she will if the task ahead requires it.) 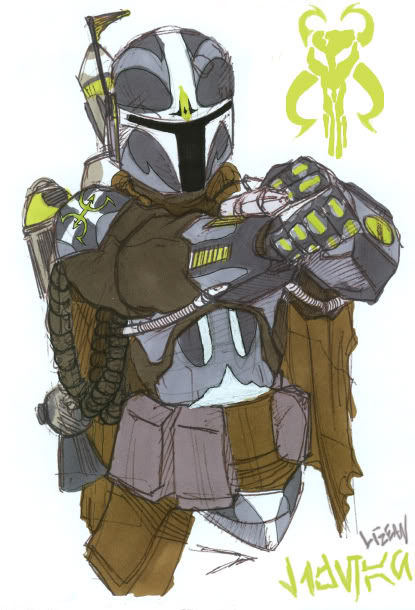 (Just a quick print out color test, this shows good detail on her helmet, I've decided since then to ditch the jet pack.) 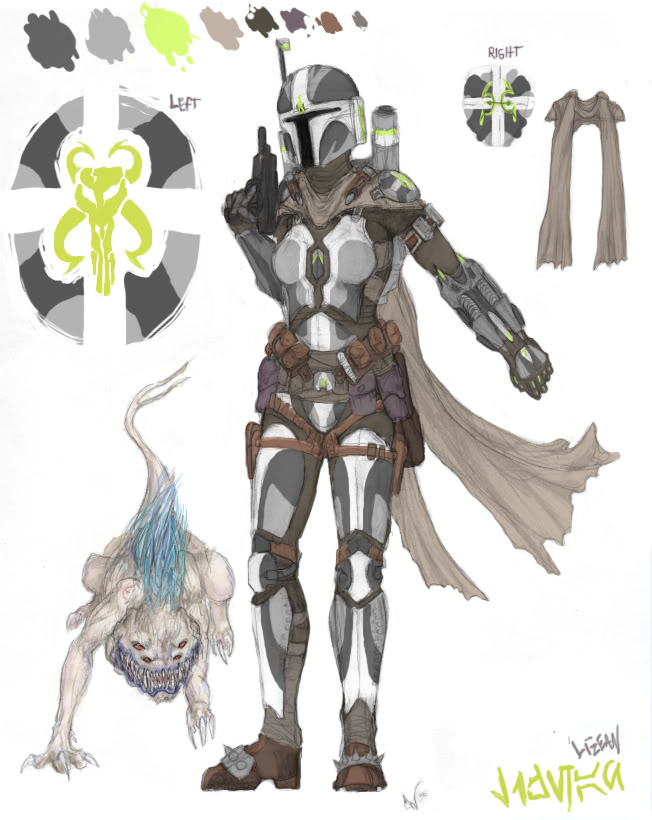 (This was done particularly fast so don't pay attention to the sloppy anatomy. And the critter would be her lovely pet Nexu, Cyare, adorable hmm? Haha.)

First of all, I guess I want opinions on my plans before I jump into it and or go off evaporating too much of the already minimal cash flow.

First of all the helmet. Keep in mind I'm:
5" 3', medium build. So from what I've read around, the rubies Jango would be the way to go because it is the smallest. Though, being a particularly picky perfectionist, the little quirks in the helmet are really getting to me. Should I just pick one up and give it a go anyways?
I've been tempted to just break out my WED clay and attempt to scratch build the helmet myself at this point.

About the chest: I really want the form fitting style, similar to the glimsp of the female mando'ade in the Star Wars Insider #86 Artical.
Now to do this... I've had the idea floating around that it would require the casting of my chest area and then a vacuum form over that (I would then cut out the desired shape).

As for the her pack, I discovered that I really liked the style that Scorch(The farthest to the right), from the Republic Commando video game, wore. And also that it would be something a little less played out and a little more original then the jet pack.

As for my little play on the Mandalorian insignia, it's not pernament, but I had the idea that at times different Mandalorian clans would slightly modify the skull to better define the group. Just a concept, not meant to be a butchery.
Now I'm off to go busy myself with commissions so I can truely get started on this as soon as I can.

Comments, suggestions, idea anyone?
Last edited by a moderator: Aug 25, 2008

That is lookin very slick, i like the symbols and colors. Very nice helmet pattern

Yeah, I love that colour scheme! The whole concept is fantastic. I'm currently working on a custom pack that also leans toward the Republic Commando style.
You have a good idea with Vac'ing your own form. You will not get a better fit than that.
Nice work so far!
N

Thats probably the beastliest concept art I've ever seen for a non-lucas work.

I agree..
The concept drawings and the color scheme look amazing.

Welcome to TDH too.
G

Great! I love how it's not just another repainted Jango
N

Yeah, I really love your cape design. I also love the fact that you have a good three or four sets of bandolier pouches, it looks like this will be a very cool looking costume. The whole tri-color element is very spiffy as well.

I would be greatly interested in your back story as i've been writting mine for several years now.

Your gauntlets look sick as well, just a question how much funding do you have for this b/c this looks as if it could get pretty pricey?

Thanks so much for the flattery guys! I'm really glad people like the sceme, it took me a while to find the right one, for sure.

Nachturnus said:
I would be greatly interested in your back story as i've been writting mine for several years now.
Click to expand...

Sure thing, here's the start to the story I wrote last year, finally posted it and things are already outdated! (So not everything is spot on, but you'll get the idea I'm sure.) The Verge of Treachery

Basicly it's about Lizean's small clan that broke away from the larger traditional Mandalorian clan during the Mando'ade civil war, when Bryen didn't feel he could no longer trust the youngly appointed Mandalore (Jango, haha). I'll be continuing the story but I don't want to spoil it just in case. The basic strong point is that she has her own personal little war with the Mandalore and her future connections with the Deathwatch, pretty dramaic stuff.
(Alright I'll stop my rammbling before I get too carried away!)


Nachturnus said:
Your gauntlets look sick as well, just a question how much funding do you have for this b/c this looks as if it could get pretty pricey?
Click to expand...

Well my bank account at the moment is weeping, but, I have the vacuum form table, the clay, the plaster, the sintra and full access to a "candyshop" of tools. I also have connections through an army surplus store and Hobby Lobby(that takes care of the fabrics). So really the only things I need to restock at the moment is the primer and paint!
(It helps when you have a friend to help you through the process of aquiring all this.)
Last edited by a moderator: Aug 2, 2017

This I am looking forward to seeing come to life.

I love that 2 about it that its not like all the other mandos where it looks like jango and painted. yours is great. those drawings are fast drawn wow thats good.

Thats awesome, alot of detail, even more than Boba Fett, or Jango.

one of the best custom fem design I remenber.......hope to see it someday on you!!!!

I already invented a "youth, rare albino pet Nexu" for MY bounty hunter I used to play in an online RPG over at the now gone BeJedi.com forums.....

Anyway, I just like you concepts and I hope you don´t mind, that I already saved it and added to my collection of Mando designs. Its way creative. Can´t wait to see the physical armor.

Great design! Is it fair to assume you have a fashion background? There's a great style to your drawings, and including a color study is a nice touch. The cape style is cool (sort of an evil little red (grey) riding hood, lol), the way the belt rides the hips in a decidedly feminine way, and the outstanding use of shades of grey with accent green. I dig it. 8)
N

This is an odd question, but I've been wondering for a while, how do you shape the... "chest alowances" on fem-mando armor? I've sat here and thought about it, and I think the only way to do it is via vacu-form
G

Now those are some spiked boots!

Thanks so much again for the kind comments guys!

I already invented a "youth, rare albino pet Nexu" for MY bounty hunter I used to play in an online RPG over at the now gone BeJedi.com forums.....
Click to expand...


Um... ok, I've never heard of "bejedi.com," so I hope there's some sort of sarcasm played in here... I really try and strive for originality in my designs, you know? Nexu were actually quite popular as pets and came in many color varieties, seen in a few comics here and there (including a smaller nexu in the arms of San Hill in the "Visionaries" Graphic Novel). I don't think really anyone has the right to "claim" to the idea of it. But hey, great minds think alike hmm?

GAR Mando said:
Great design! Is it fair to assume you have a fashion background?
Click to expand...


Actually no, haha. I've had no art schooling and take pride in the fact that I'm self taught, though I'd really love to persue a fashion/design major, that is if it'd be designing armor and the like and not some silly dress on a runway.
I adore designing mando'ade, so for a small fee I'd love to be able to design more armor scemes for people who'd perhaps be interested. I'd love to do it for free, but art is my source of income and that of which I need to work on this project.

Nachturnus said:
This is an odd question, but I've been wondering for a while, how do you shape the... "chest alowances" on fem-mando armor? I've sat here and thought about it, and I think the only way to do it is via vacu-form
Click to expand...

Yeah, certainly. I'd go for taking a live cast of the actual person with plaster bandages, then re-enforce that mold and then go for a vac form.

Another idea might be to look up some torso modeling Mannequins(the ones you see modeling lady's undergarments), build them over a little with some sort of heat resistant modeling material (perhaps air drying paper clay sanded down?) to make them look a little more rounded, thick, and give alowance for the material warn under the armor. I searched all over ebay myself and the prices average at around $40 I believe. Sadly for myself I couldn't seem to find any that would suit me.

Anything to avoid the awkward "bubbles" that I believe would come forth from a freestyle attempt with flat sintra.
Hope this helped.