So I'm assuming we're SOL on getting our fabric before All Hallows :facepalm

I was hoping I wouldn't have to use the backup less-than-mediocre shirt, but it's good to see a lot of you other clowns are pretty much good to go. I still can't wait till this weekend.

I was only talking about the actual eye. all the other effects Im not worried about. Though cool to know. Like I said before though if I was going to the 9's for this to be noticed I would have issue with people messing it up and I just wanna have fun and go nuts for the holiday. Besides I dont think I'm even going to go through and cement the make-up My hopes are To have more make up on my girl and couple of our friends than on myself by the end of the night.
S

Beautiful job AZspidey!!! Probably the best, and most screen accurate recreation I have seen so far. I am quite jealous of the hair...
Last edited by a moderator: Aug 2, 2017
M

Well, pending 12 hours or so for paint & glue to dry, I now officially have the shoes and gloves. Went with Sinister's design for the shoes, except with the black ones (after you sand them, they come out looking pretty great). I have to say, BIG props to him for all the advice... they look AWESOME. I especially want to thank him for the recommendation on the glue, I was having a really hard time figuring out what to use so the patches wouldn't come off.
S

Happy to help. Glad things are working out for you... :cheers
S

I hope everyone had an amazing Halloween!!!

here is my joker get up!

Hells yes I got to dress up twice. I ended up going with my Nurse costume full make up and I added some white knee high opaque stockings and white leg warmers and white slip on shoes. I also wore a pair of Batman boxers so I didnt have to worry about modesty what so ever. I got beat in the costume contest by two guys dress as the tennis playing geico Cavemen which was deserved. THat was at the Monster's ball headlined by Darude Which I drank a ton and danced my *** off! Just an Amazing time. Im hoping The promoters post the pics soon so I can Show you guys:cheers
S

Just a little quick and dirty photoshop for effect...

It has been great to be a part of this wonderful thread and to be introduced to another really cool costuming site...

Many thanks to all here at The Dented Helmet!!!

this was posted in the other threadm but for those who don't check it out, thought i'd post it here! 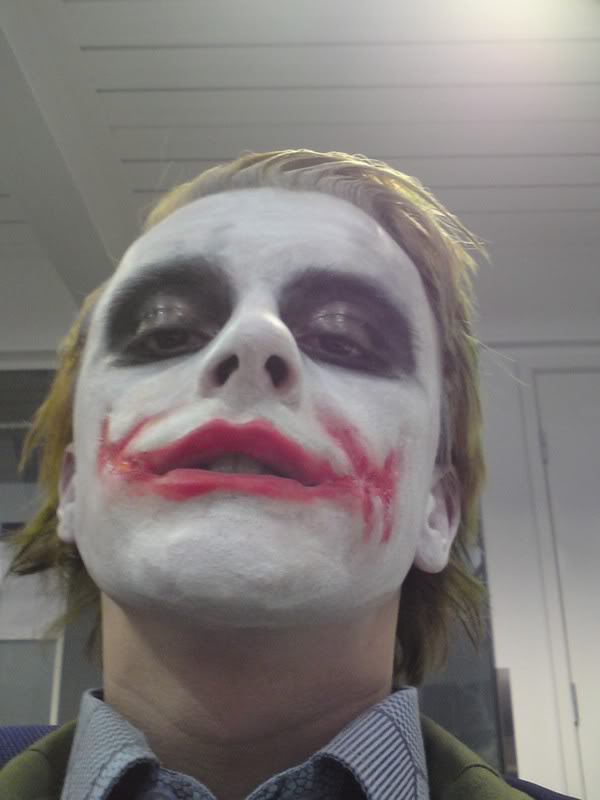 hey gang, I'm just throwing this out there to see if there are any takers. I found a place that sells melton wool fabric and will match colors if provided with a sample. Since I found some fabric that is what I consider to be a perfect color match to the joker's overcoat, this intrigues me. However there's a minimum order far beyond what I'd need, so it would be great if I had some other people to go in with me to get it. So if you're interested, let me know. I don't have any real specifics yet, and since convention season is over, I'm in no hurry to do this so it could be a month or two. Just curious if anyone's interested. I'll be going through a different board to do ordering and such and since I've grown to like you all so much, I'd like to include as many of you as possible.

Hope you all had a great halloween, I know I did.

this is my hallow's eve photo, i decided to do a few thins different , since i had no time to bleach then die my hair, also y made my own buttons and i liked the pants i first picked out months ago ,also i used the comedy and tragedy cufflings , overall i just wanted to make my mark on the joker who made his mark on me... keep that in mind as you tear my version apart... 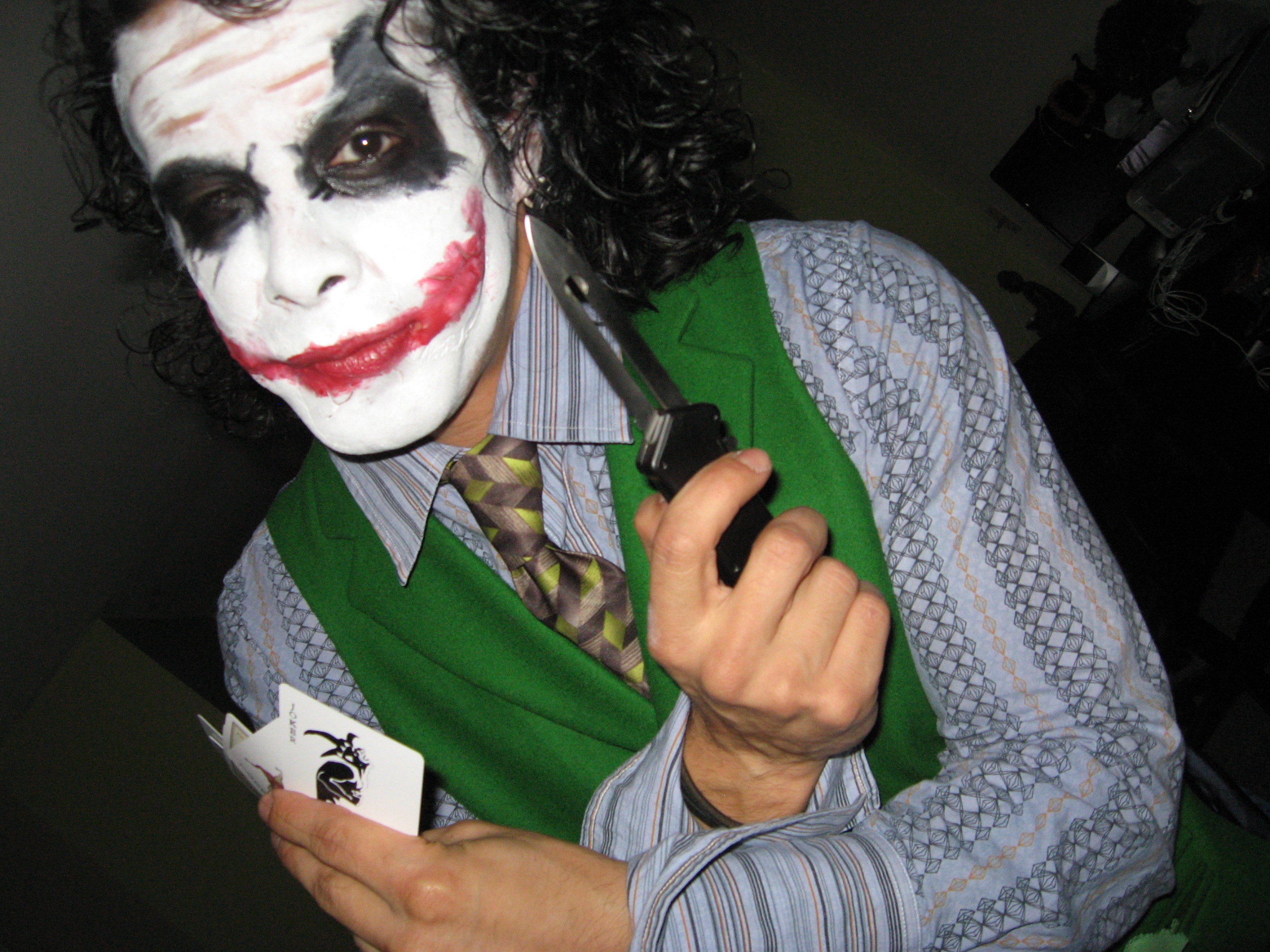 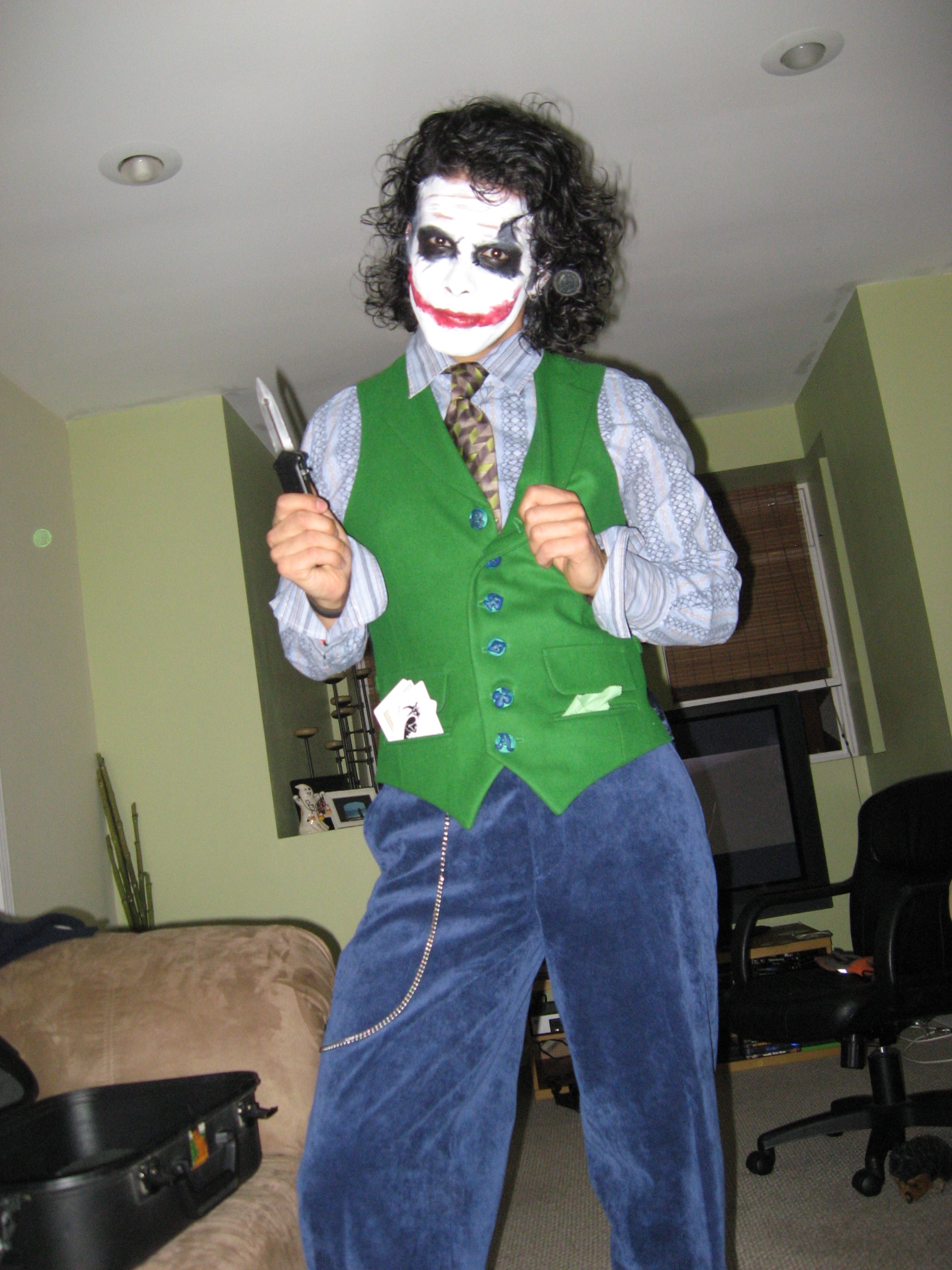 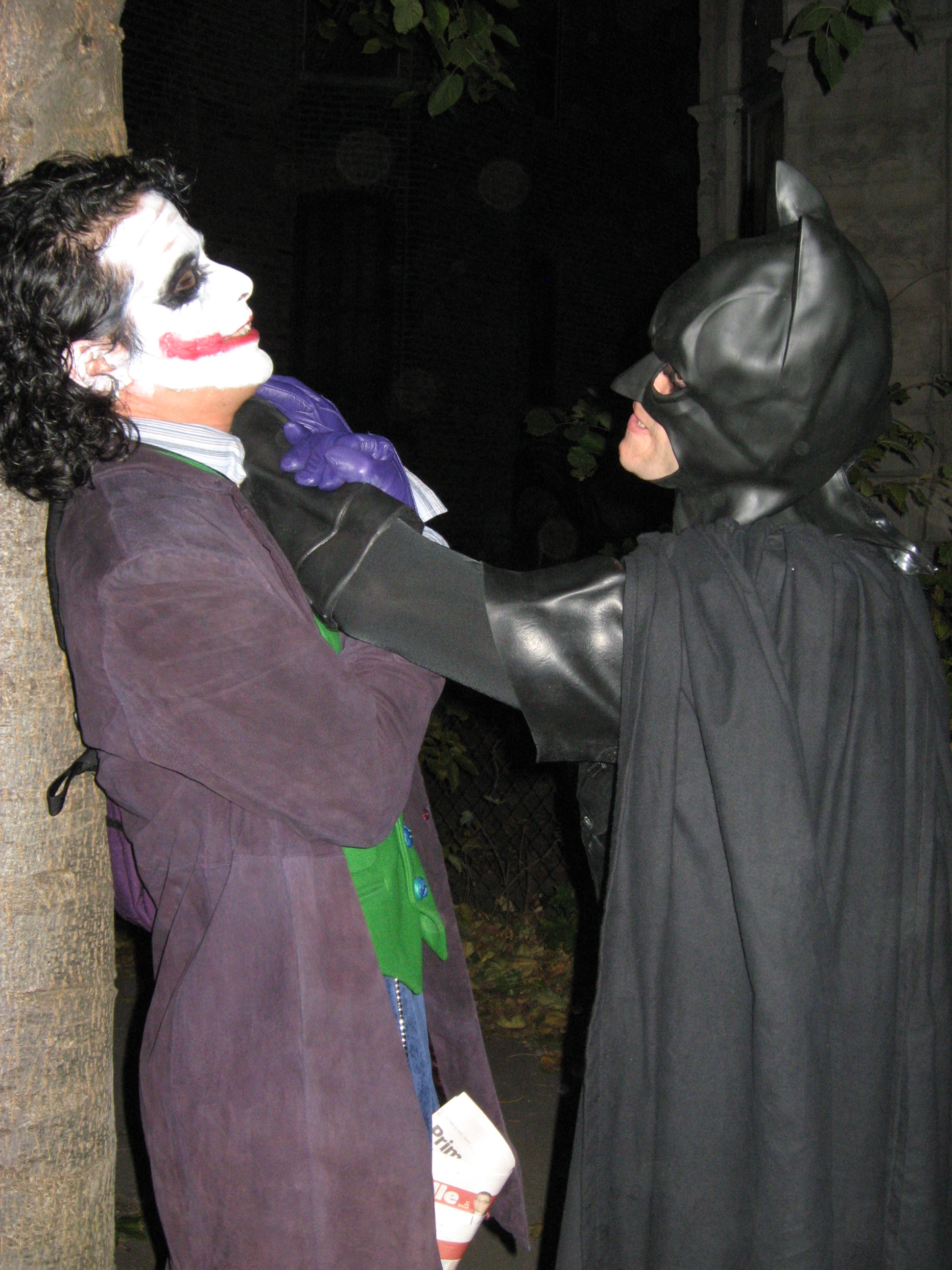 thsi is my & my family 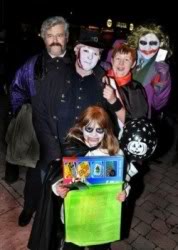 Since this is the Go to thread for Joker folks, I thought I'd link my showoff thread.
http://www.thedentedhelmet.com/showthread.php?p=382870#post382870
R

Can't find the picture with the coat on, but here's my picture I posted on Deviantart: 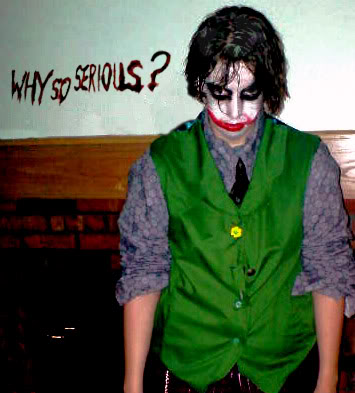 I'd been wearing this for about 4 or more hours by the time this photo was taken with a cameraphone, so yeah. I couldn't resist doing the flower and coin head buttons XD
Here's what I posted with the picture on DA (mostly cuz I'm too lazy to write it again): Ok, well keep in mind I'd been wearing this for over 4 hours when the picture was finally taken (hence the vest is a horrid wrinkled mess). I wasn't wearing the gray suit jacket, purple trench coat, or gloves in this. And my hair was naturally migrating back to being parted on left instead of on the right like it should have been. And it was starting to lose its curl.

Other that that this costume turned out very awesome. I hand-made everything except the tie and socks. The shirt had to be custom-ordered fabric but I was a douche and sent the wrong file size so the hexagons are about half the size they should be. *smacks self* I only had an hour to get everything on so the make-up kind of failed (the scars were basically these big blobs on my face).

I wore this to work (Mercedes Benz) and got a thousand compliments. My friend dave said he thought freakin Heath Ledger was scanning files when he first walked in and I had several co-workers get right up in my face and still were like "um... are you rachel?" because I wouldn't say anything (talking was difficult). I freaked the **** out of a little kid, and everyone kept quoting the Joker around me (they think they are all so clever). It was a fun time, despite being sick. :C
C

@crono: not bad on the costume, but the make-up needs a lot of work. it looks waaaaay too clean
G

I'm still waiting to get my pics from a friend who was taking them. I was running around too much to take any.