Yes, it has begun. I am now officialy a BUCKET HEAD

-tubachris
(Whos waited 3 years and now the day has come)

Yeah! Good for you bud!

Matt
( who had noticed Tuba likes to use Relative Clauses in fragment form after he has signed off)
Last edited by a moderator: May 24, 2006

Awesome, bro! Congrats! Can't wait for those pics tonight. And definatly don't forget to post tons of pics along the way!

Hey guys, sorry for not posting them earlier. I got caught up in a gig playing for a graduation.....jeeze, over a thousand students graduating. Got there at 3 pm, and got back at 1130pm So i'll try and do them tomorrow. LOL, should I just post pics of another BKBT? I mean, after all, many have posted theirs before, and I dont want to seem like a repeater...

-tubachris
(who will post pics just because he can )

I know, I know, I dont have any pics yet, my camera's batteries have died, and I have to go get more later. But I have started already by trimming the excess fiberglass at the bottom, and cut out the T-visor. I really wanted to cut out the key holes, but I was only able to do a preliminary cut, seeing that my dremel is too big to cut it out. I was wondering if there is any better way to cut most of the key holes out so that I can reasonably sand it to where it needs to be? Thanks.

-tubachris
(first time dealing with fiberglass, and my neighbor thought I was gonna bum rush her house by my bandana mask, and mando helmet....)

Just got back from Home Depot...
Only was able to find 4 things I may need. Got Rust-olium royal blue, as well as rust-olium painters touch white sandable primer, scotch blue painters masking tape, and 600 grit sand paper. Need to go by an ace hardware, or walmart to get everything else. I also decided to use the screwdriver method for removing the keyholes. Gonna try out the super glue with baking soda for gap/hole filling. Anything wrong with anything Im doing so far? Just need to know before I screw it all up. Thanks.

I agree, bad idea! Just drill some small holes & use a small file to get in there to square everything up. You can get small inexpensive files at the hardware store or hobby shop.

TUBA! DUDE! Please don't do the screwdriver method!!! Above and beyond "WRECKING YOUR PRIZED HELMET or MAKING MORE WORK!" When applying preasure to the helmet, there's a "HIGH" % that you'll slip and or the screwdriver will let go from the desired area and either go into your Support Hand, Arm, Leg or the WORST an Eye. DRILL A SERIES of small holes until you can sneak some small modeling files into the slotted areas, like previously suggested!

Good Luck Bro! It's good to see that you got clearance from whatever towers that were keeping you in a holding pattern!

LOL, Dont worry guys, I didnt use a screwdriver. However, I did experiment a bit with my friends dremel and bit atatchments. I dont know the names of the smaller atatchments, but I used a combination to cut the keyholes, which were a series of small, needle, drill like bits. And no, I didnt mess it up fortunatly. I may be an idiot at this kind of thing, but im not a blithering idiot at least. Finally got some batteries, and now I have pics. So far, I cut out the visor, and got a small metal file, along with the sand paper, got about 99.9% of it done. The keyholes are cut out from my dremel experimenting, and with the metal file, I sanded what I could, but still need to get a thinner file to finish it up. I still need to know if that rust-olium painters choice white primer will be okay, cause I havent opend it, and I can always return it if its not okay. Here are some pics.

Assembly Required (WARNING: CHOKING HAZARD, FOR AGES 3+ ONLY, NOT FOR MORONS WITH A SCREWDRIVER) 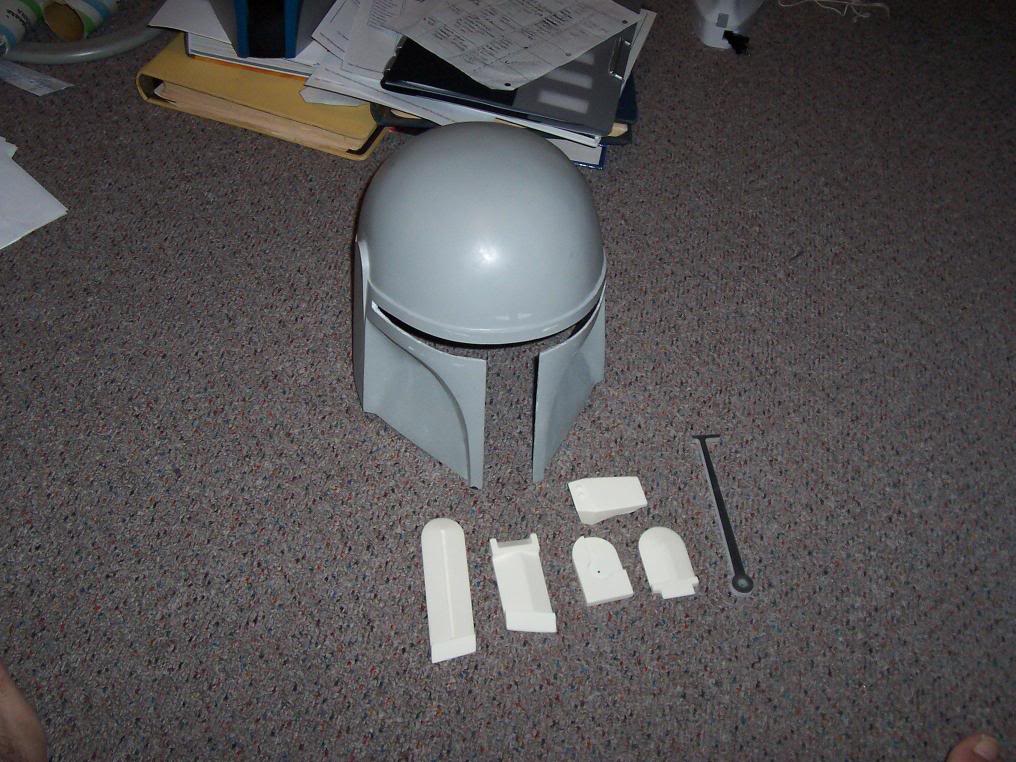 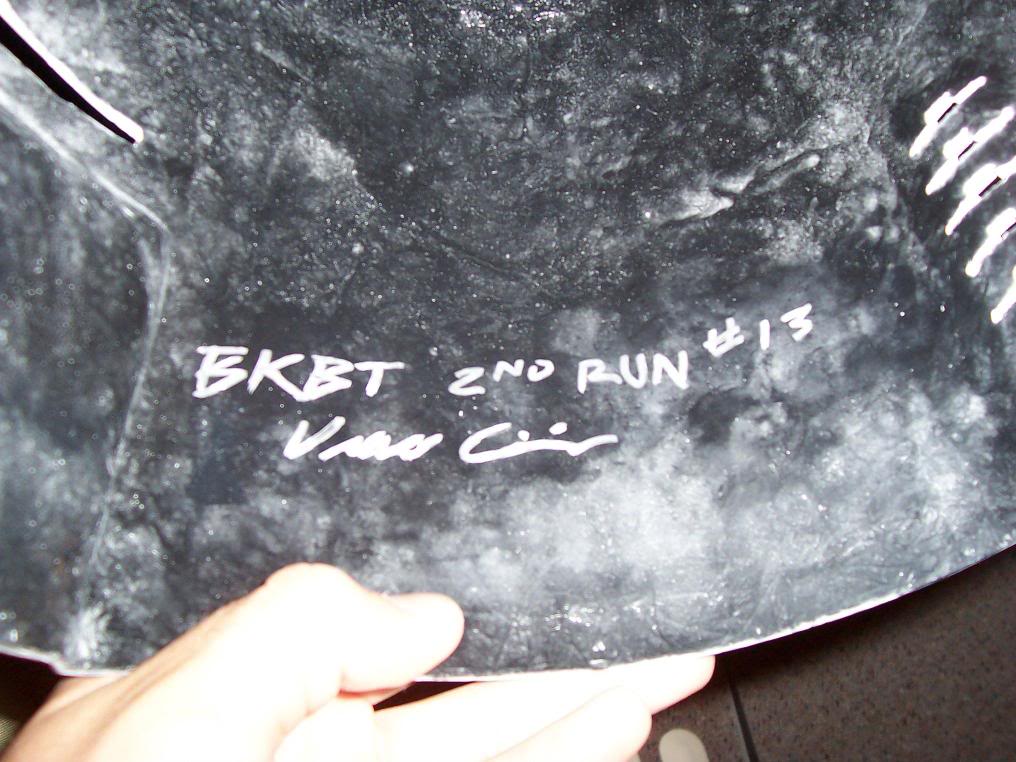 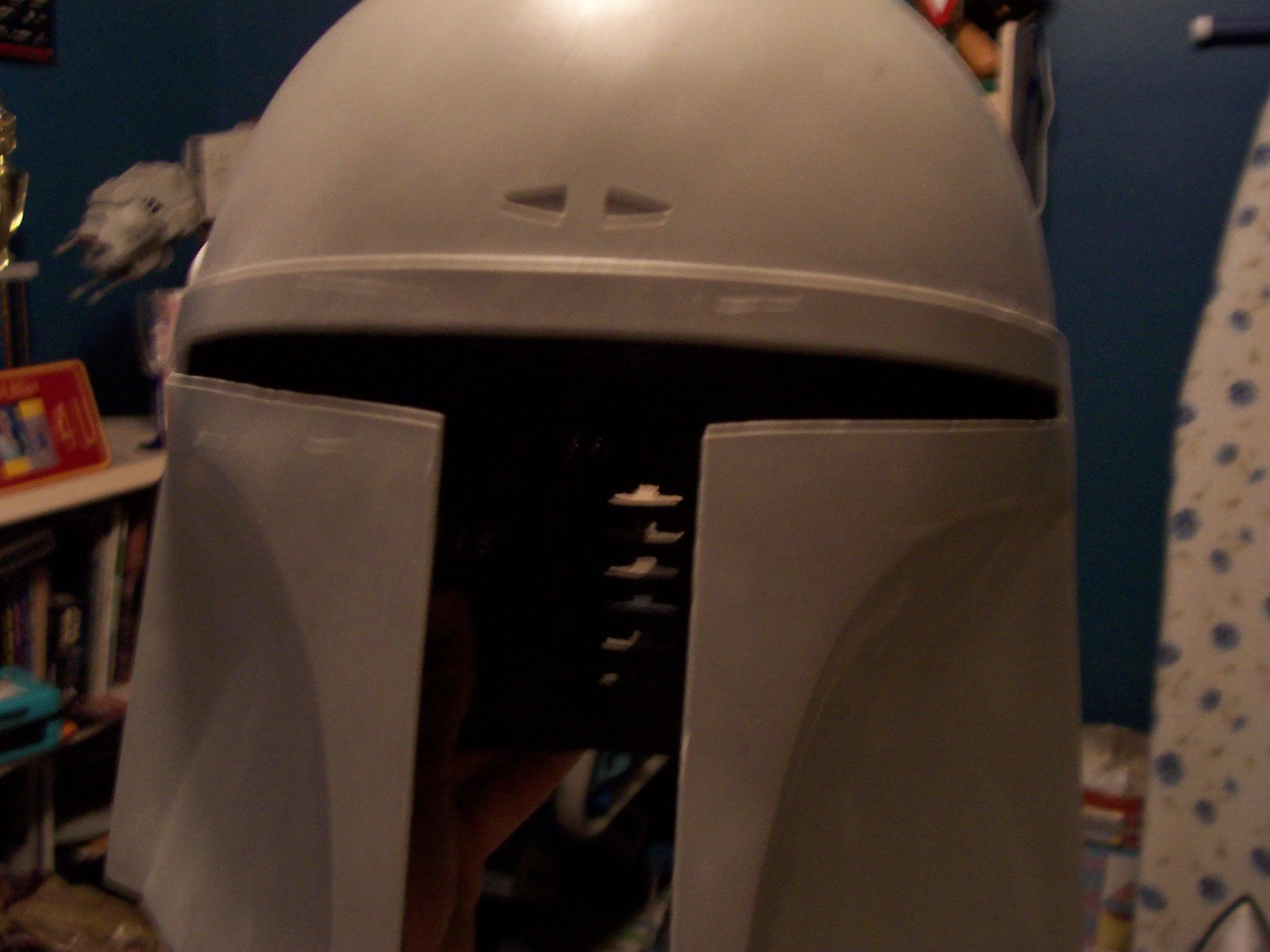 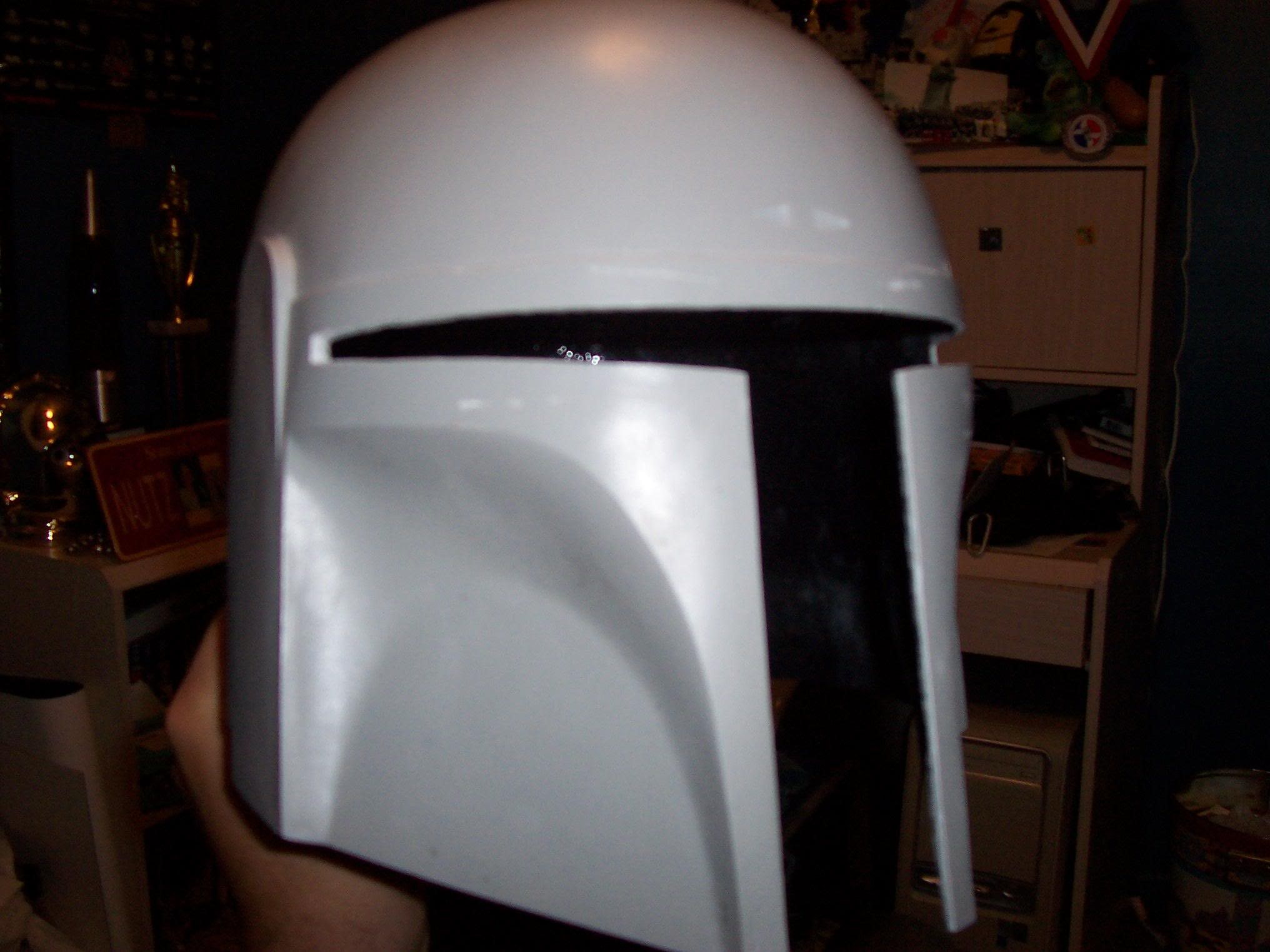 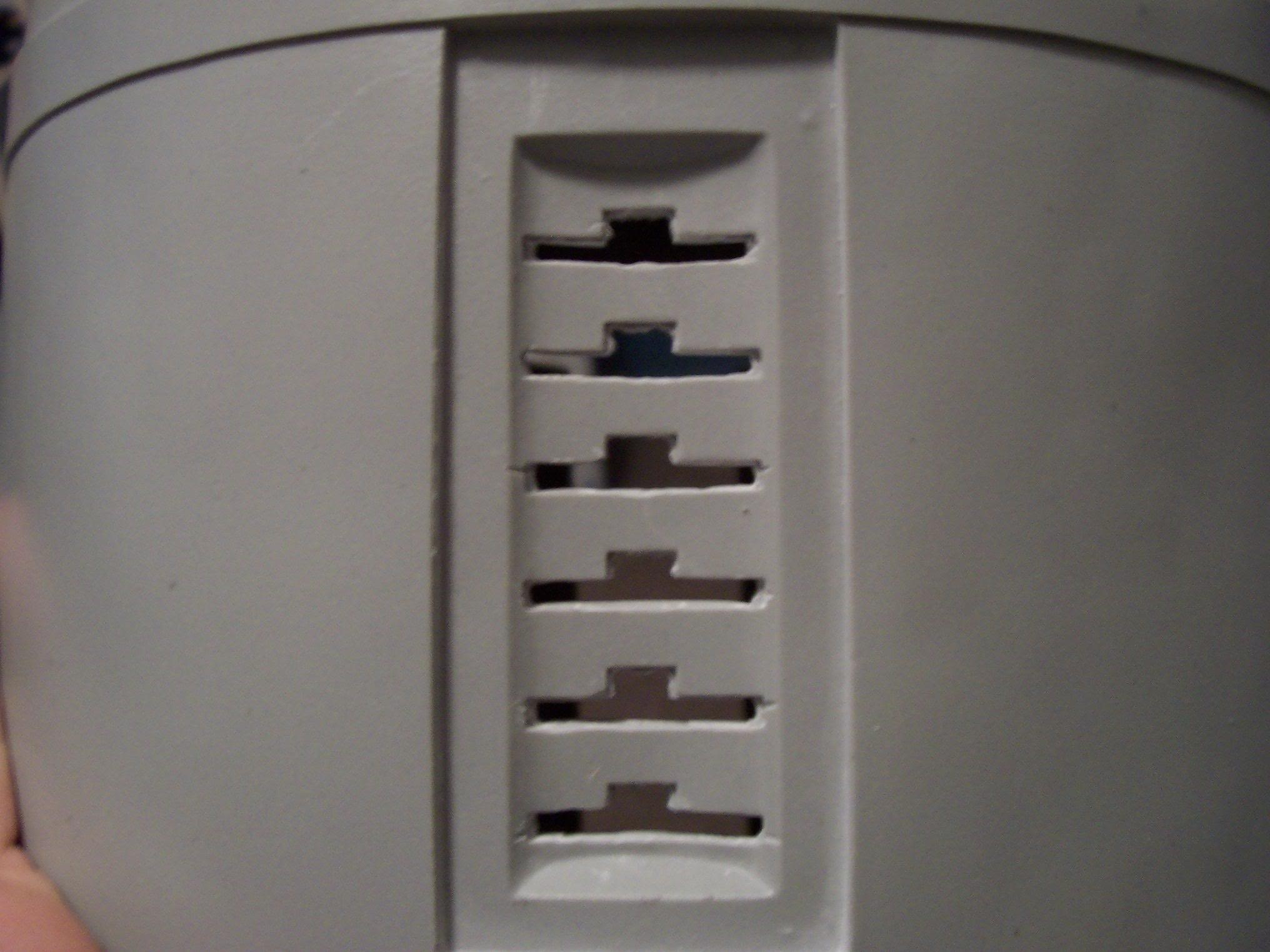 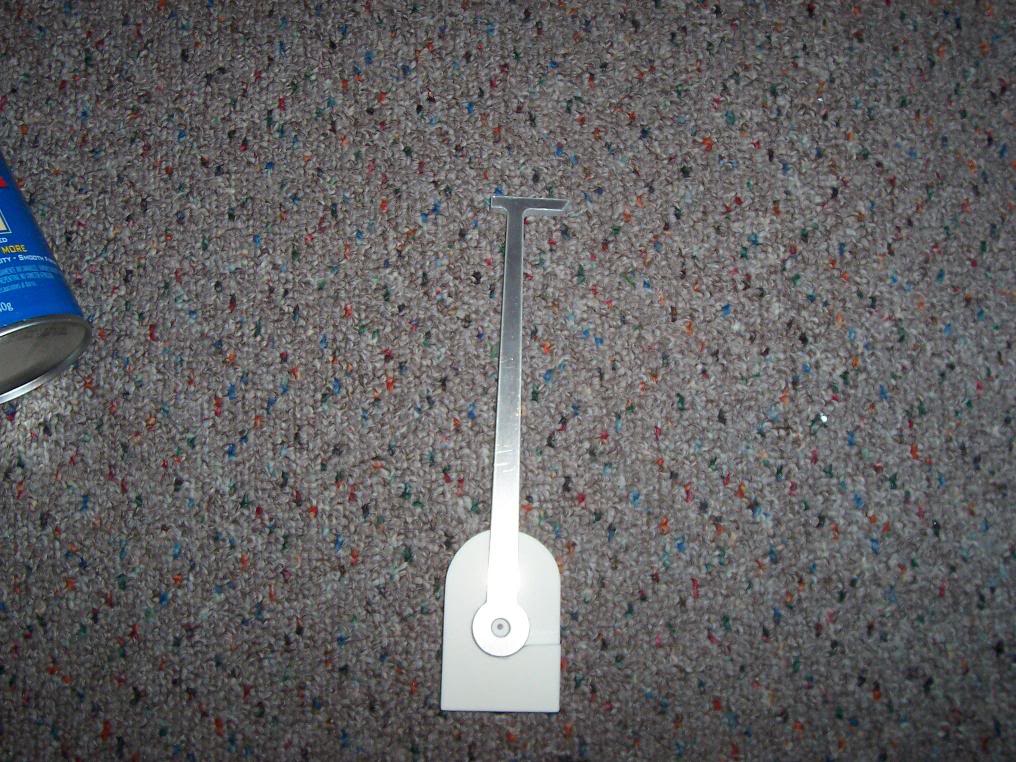 Enjoy some of my other fine houshold products... 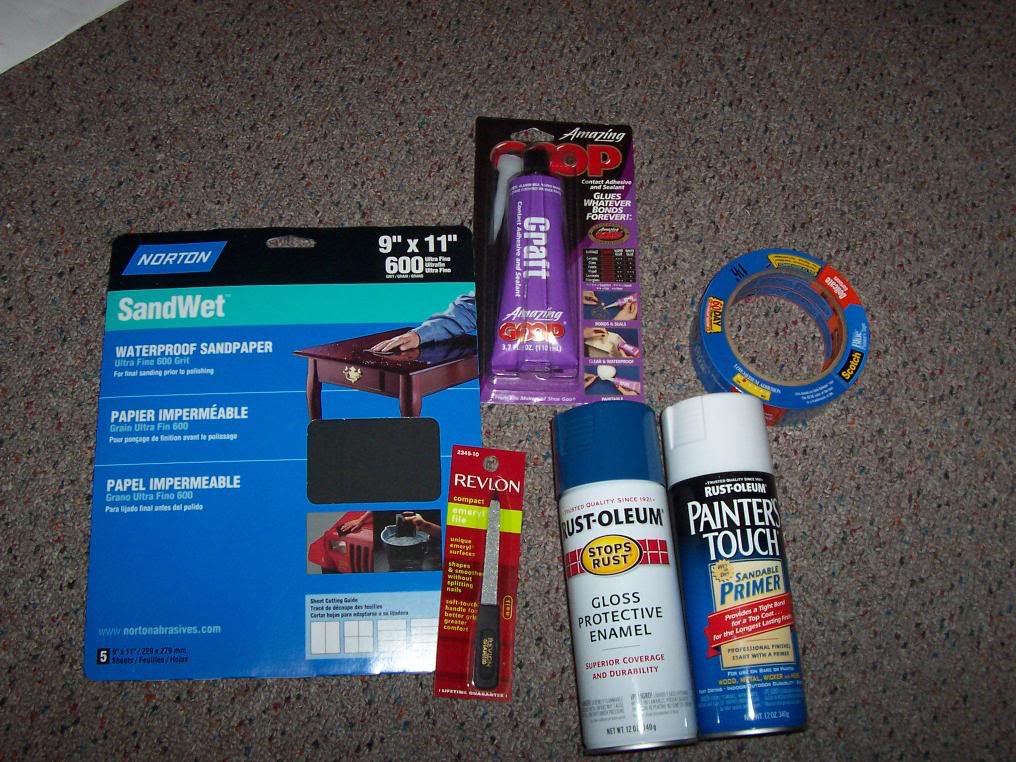 That concludes this weeks adventure, tune in next time, when "Paint martians fro mars ATTACKS!"

I suggest the dupli color sandable filler primer. It like 3.50 a can at wal-mart but works great!
G

Damn, I would buy the helmet just for the signature inside of it...

GCNgamer128 said:
Damn, I would buy the helmet just for the signature inside of it...
Click to expand...

-tubachris
(who only had to pay $10 for a WWF wrestlers sig.)

Sorry for the lame pics above, reminds me of how a 3 year might take pics, I'll post better ones later of course though. Fortunatly, my G-friends grandfather has a better know how of some of the work needed to be done, so I went over, and he helped me countersink a screw into the stalk (not a "screw" 'screw', a smooth bodied bolt, with a screw that fastens into the side) I dont know the technical term for it, but you'll see in the pics later on. As well as getting the proper "screws," we put holes through the resin piecs and the helmet itself. Aslo we drilled 2 holes on the top, underside to where the RF box would be attatched, as well as pilot holes for the screws that I will add after painting. Other then the RF attatchments being finished really, I as well finished sanding the visor and keyholes. The only thing left now, is to sand the helm, prime, sand... and then paint it. I plan on using a q-tip to swab on some Goop to fill the small holes in the resin pieces, as well as some smaller, descret portions of the helm. After that, I paint it all, rubb and buff it, add some elbow grease, and that will be it I guess (minus the liner, attatching the wire mesh behind the keyholes and of course, attatching the visor) Seems to be going quicker then previously expected. I just want to confirm also that it is a "1/8" inch black stripe, went out, and bought a roll at an auto store.

I'll be leaving sunday morning, and not getting back for 4 weeks (MAA and Honor Guard training at NAS Kingsville, Texas) I'll continue on July 1st probably. Cya guys then.

You can also use autobody glazing putty for any tiny holes & minor scratches. This is the air dry stuff & it sands off very easily. CA glue mixed with flour works well for the pinholes but is harder to sand off. I usually just put on a couple of coats of sandable primer. This is much thicker than regular primer & helps build up any low spots without the use of bondo. In fact, when I do my own work, I jump from 120 grit sandpaper to the primer. But then again, I a lazy painter

Okay, new update. I managed to finish the sanding the rough areas, and corners of the helmet. Just today, I wetsanded the whole helmet with a sanding sponge, and then with 600 grit sandpapaper. I applied the first layer of primer as well over the whole helmet. Right now waititng for it to dry so I can wetsand it again. Here are some pics as of now. 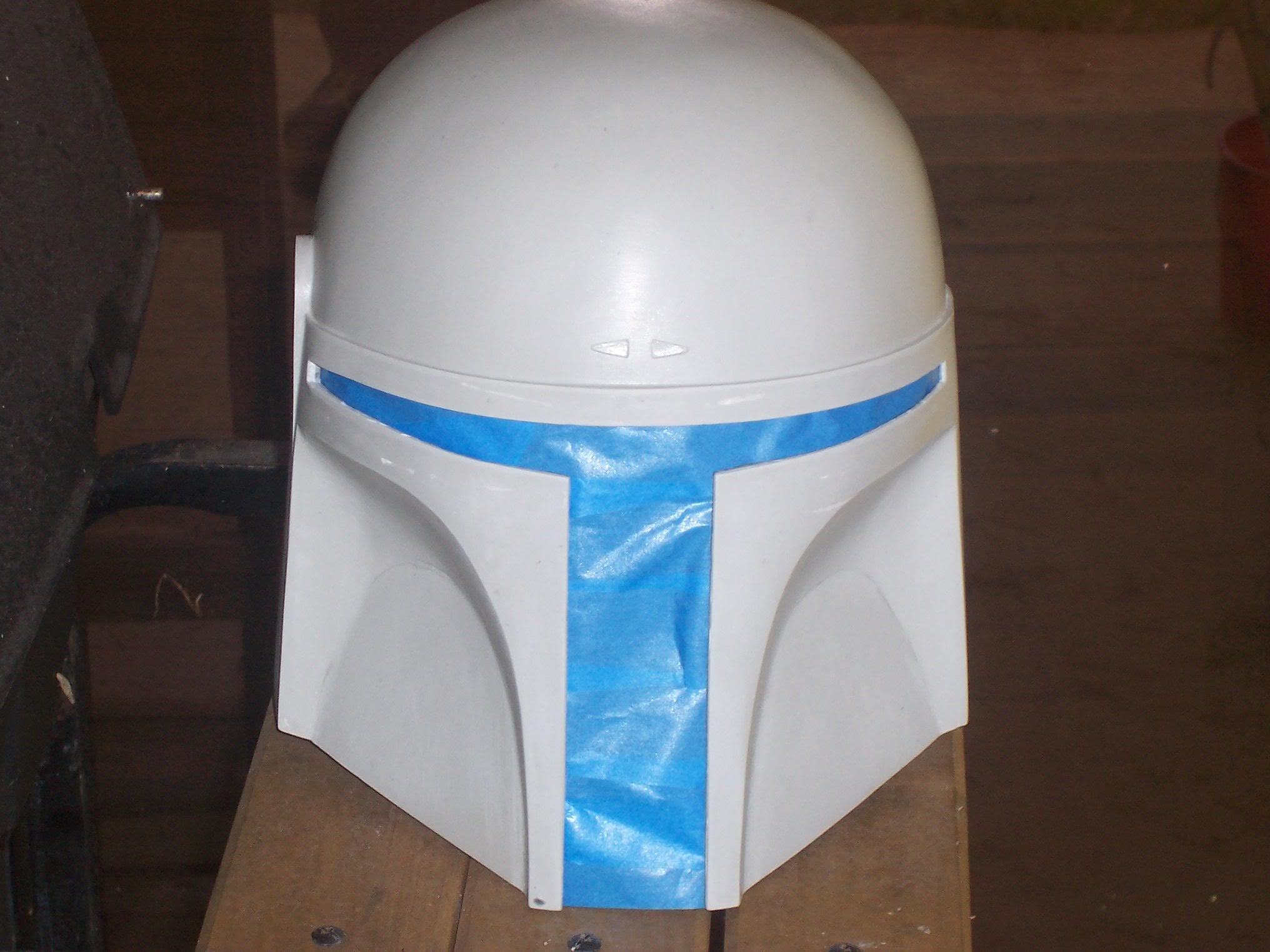 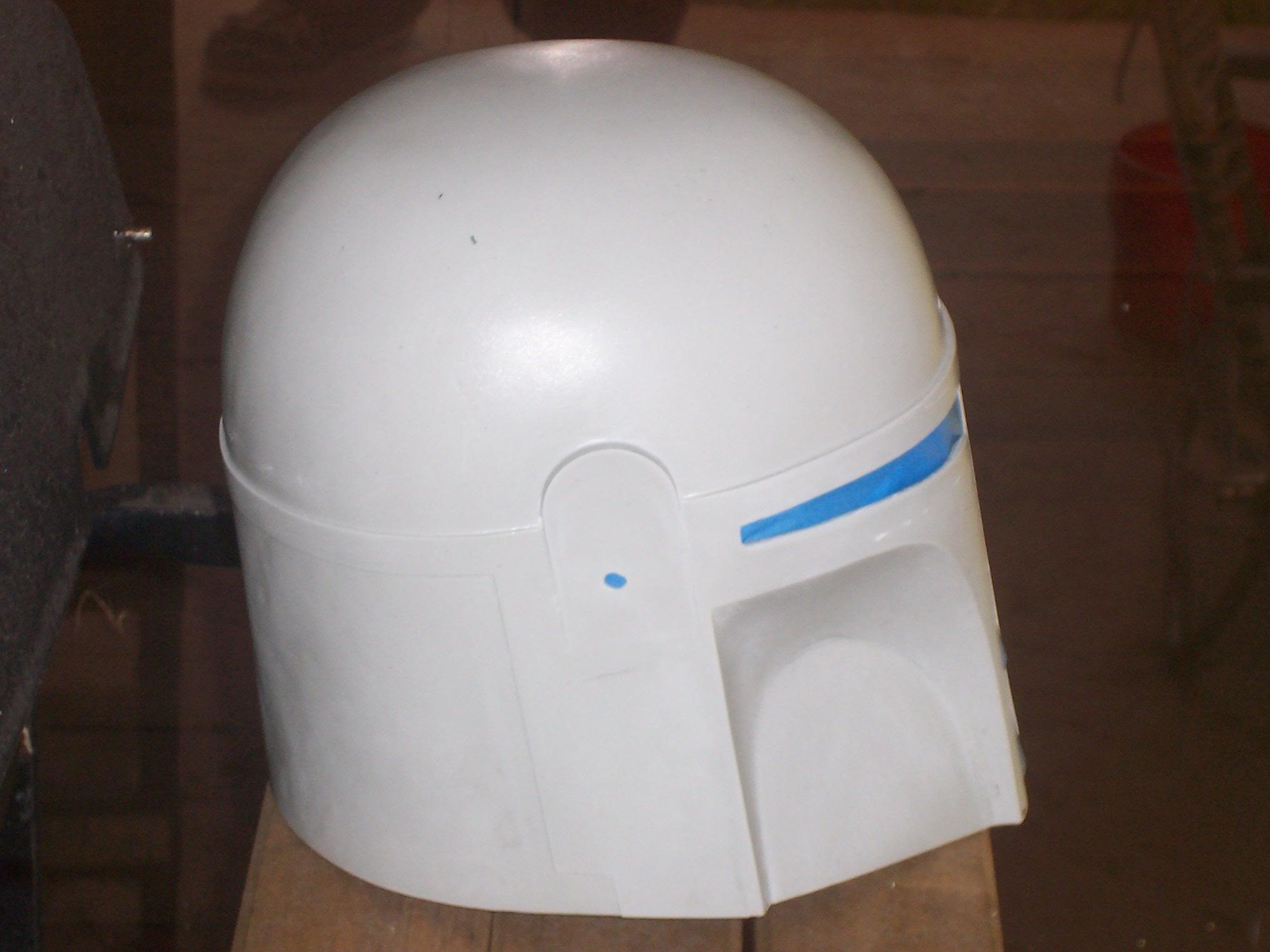 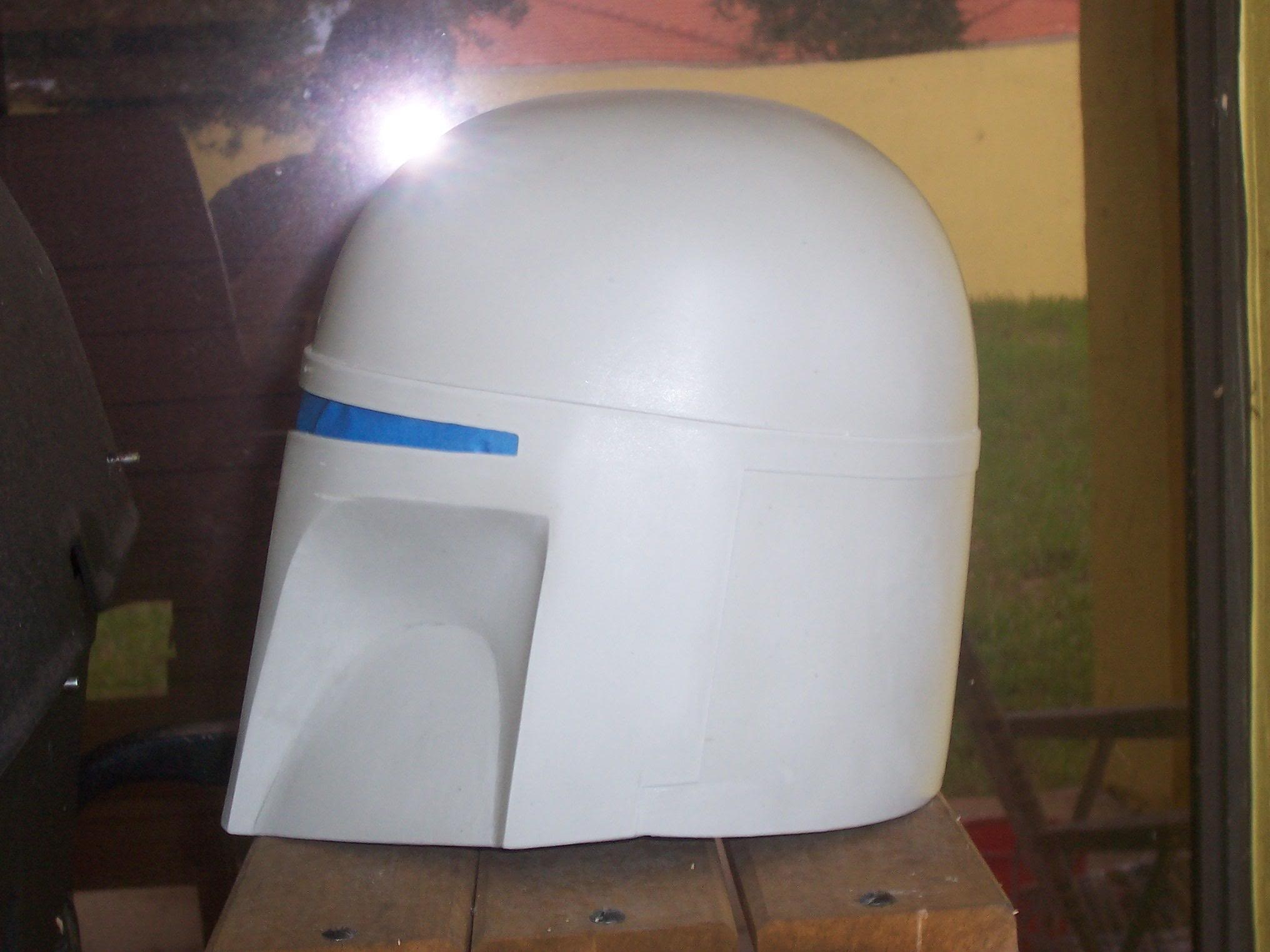 As of right now with primer layer 1 (note: part of the dome looks kinda dull due to reflection from the fresh primer) 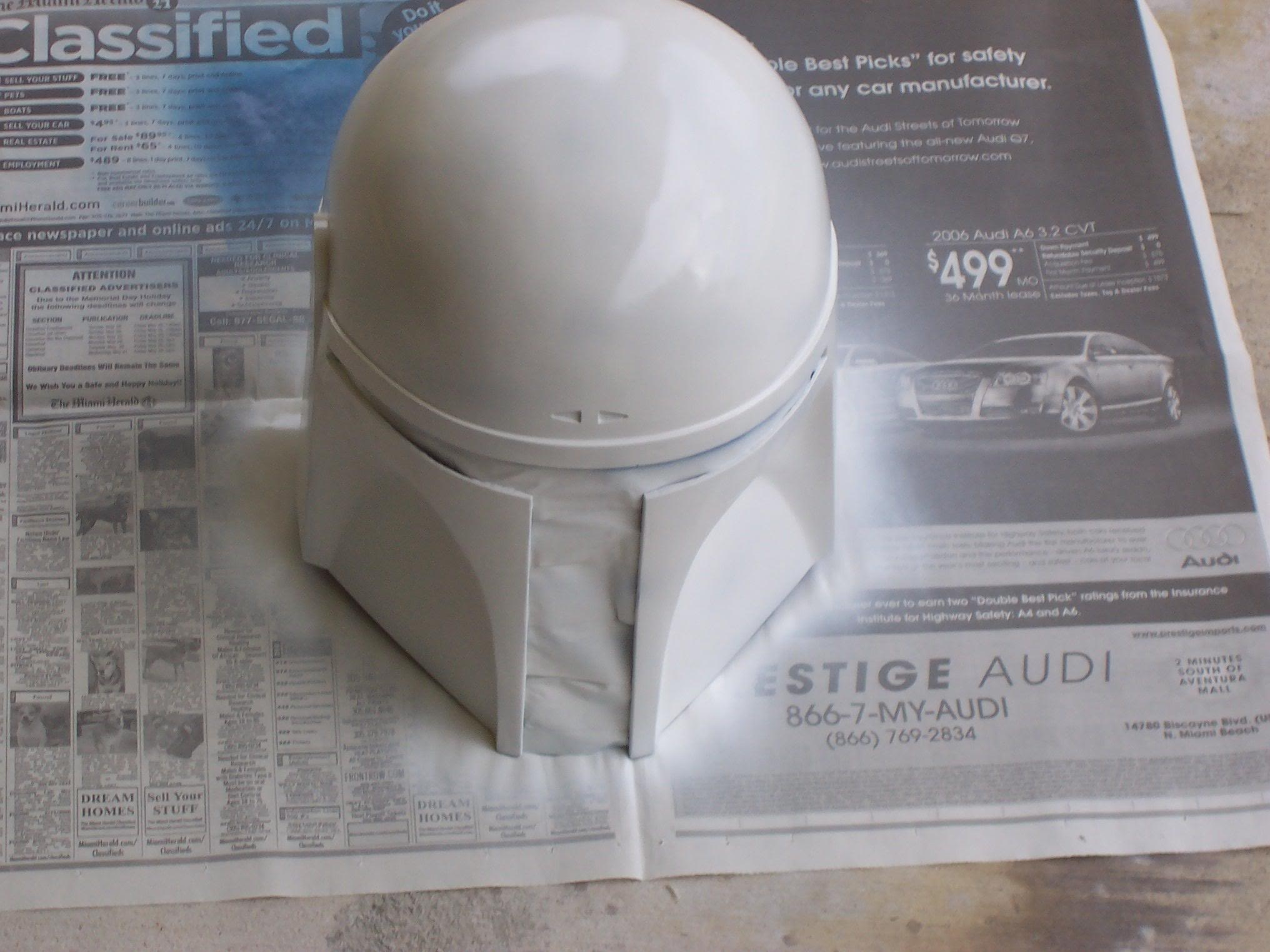 Tuba, how do you upload those huge pictures? I get the file size too big message all the time and my pics aren't that huge.:confused

Go to www.photobucket.com and sign up. You can upload pictures directly from your computer, and once its uploaded, it gives you a URL link, and an "image" link which I posted as such. Goodluck, and thanks, I'll have another update later tonight too.

How about you start uploading some smaller pics, I have to right click, get the URL, and open it up in IE so I get a smaller photo. If you look in a microscope, you see reaaaaally close, but it's hard to see what the object is you are looking at since we are so far zoomed in.

I normally reduce pictures to 25% of their original size on my 5megpix camera.

B
What is a good Jango helmet to buy with the dent in it as seen in AOTC?

M
Pistols Can the same modifications be made to the Hasbro Westar as the Rubies?

Has anyone ever used a kitchen stainless steel back splash for Jango armor?

Has anyone tried one of these flak vests??

B
What is a good Jango helmet to buy with the dent in it as seen in AOTC?

M
Pistols Can the same modifications be made to the Hasbro Westar as the Rubies?

Has anyone ever used a kitchen stainless steel back splash for Jango armor?

Has anyone tried one of these flak vests??