Ok so I've started to repaint my Don Post 96 Helmet and have been using mostly Steve the Swede's awesome tutorial for reference. I painted the dome and cheeks with Model Masters Panzer Olive Grun as per the tutorial and I think it looks too dark. I should say that this paint is enamel instead of the acrylic he used but don't know if thats the reason or not. Also I did not prime the helmet white prior to adding the paint because I wanted to try a layering technique I've since given up. I am a fan of the not so much "spucey green", but a little more towards that direction. <--- See my avatar of the original helmet for what I want. The panzer olive just looks funky on my helmet. Does anyone know why this paint looks dark?

Any and every paint sceme help would be welcome. Thanks for helping a newbie.
Last edited by a moderator: Jan 24, 2006
D

Must be that its enamal then, cause I use panzer olive green in pollyscale acyllic and it comes out perfect.

It's a funny colour, but a lot of the AOSW photos have a blueish tint from the lighting, which drastically changes the colours. After Rogue Studios' exhaustive research, the Panzer Olivegrun was found to match the original helmet in person.

I did notice the enamel is a tiny bit darker than the acrylic, but since you've only done the one cheek you can always redo it with a few drops of white in the POG. You will probably notice though once you get all the colours on that they seem to look right when together. For example, for years people had been painting the right earcap various yellow colours, even gold. When RS suggested the colour "Earth", it initially looked funny to me after being so used to seeing it yellow or gold. However, once I saw it next to the POG and Boxcar Red, it looks perfect.

We've had to rely almost exclusively on our tour photos for ESB helmet reference, and as a result, I think our perception of the colors has been slightly skewed.

The exhibit lighting is less than ideal, and the majority of the helmet photos are taken just a few feet away from the prop with a bright flash, which is the real problem. Anyone who has taken a photo knows how much color can change and be washed out with flash.

Photos lie. Plain and simple. Panzer Olive green was the color two respected members independently chose from several floquil swatches while holding the swatches next to the ESB helmet at the AOSW exhibit.

Here are a few studio photos that show the helmet color in more natural lighting: 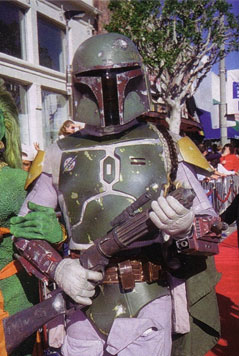 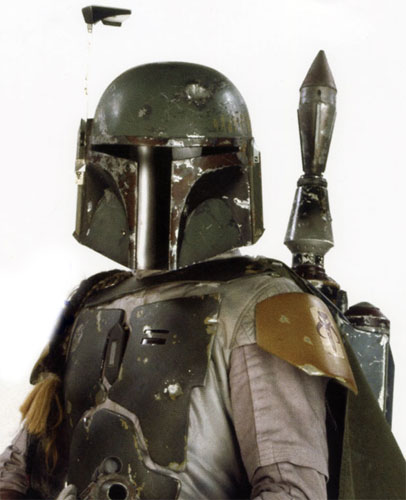 tylerdurden said:
We've had to rely almost exclusively on our tour photos for ESB helmet reference, and as a result, I think our perception of the colors has been slightly skewed.

Here are a few studio photos that show the helmet color in more natural lighting:
Click to expand...

Wow, you guys are awesome! Thanks for the tips everyone!

Tyler. Is that 3rd pic ( boba_fett.jpg) original or fan made. Don't believe I've seen that one. Got a larger version?

That is an original, its from the same photo series as this one: 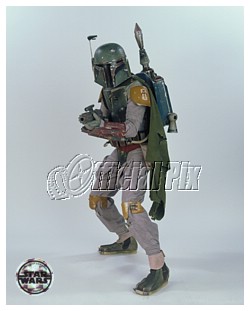 Yeap, there are several photos from that shoot, but I haven't seen a high-rez version of that particular photo yet.

Speaking of these reference photos I am curious; Just how many pictures and from what sorts of sources are included on the reference cd for the Fett man?
S

tylerdurden said:
Yeap, there are several photos from that shoot, but I haven't seen a high-rez version of that particular photo yet.
Click to expand...

The original reference disc has over 1500 Fett and Fett-related images. The pictures are from the various SW-related prop exhibits, SW photos published in books and magazines, still photographs, lobby cards, and from fan-made costume submissions.

The images I posted above are not part of the original disc. Naturally, other pictures have surfaced since the release of the first CD.
S

ya i like it to. its all worn but the indevidual paints are shinny. you could prolly use a wax to get somthing to that effect
S

BobaFettSlave_1 said:
ya i like it to. its all worn but the indevidual paints are shinny. you could prolly use a wax to get somthing to that effect
Click to expand...

Actually Polly Scale/ TESTORS makes an Arcylic Semi Gloss Finish that you can buy and apply with an air-brush......it's actually what I use on all the Silver scratches to insure the "Shine" remains......
Then I comback with a Testors Arcylic FLAT Finish on the rest of the HELMET.....Works like a charm...

It lightens up a bit when you take a scotchbrite pad to it.

Bobamaker answered an Email I sent him and told me that he thinks the Panzer Olive is too dark also. He uses a paint called Dusty Green from a company called Anita's? Anyone have opinions on this? I have not seen the original helmet in person but I do think his paint more closely resembles the majority of ESB helmet pictures. I understand how different the paint can look and greatly appreciate the photos tylerdurden posted for comparison. But isnt that suit from the Special Edition? Might the helmet they reconditioned have been blackwashed or something? I think the best example on screen of why I think the helmet may be lighter is when Vader and Fett have their little chat in the red hallway of Cloud City. There does not appear to be excesive lighting and the color looks definatly lighter. Also the ESB armor appears the same color in that shot. I believe it to be the same color but as I understand it that armor is lost. Do any natural lighting ESB photos survive? Sorry to question the experts but I have to figure this thing out. Thanks.

No prob on the questions. The following is a basic history on Floquil/Polly-S paints and Fett's helmet/armor:

For many years, Fett hobbyists used either custom mixed paints, Walmart/Rustoleum/Krylon spray paints, or a combination of both to paint their Fett armor and helmets.

Rogue Studios, however, had a hunch that the suit colors were just "straight out of the jar" colors that were weathered. While speaking with a prominent ILM model maker, RS asked what paints would the ILM prop builders have used on Fett's costume. And the ILM model maker said it had to be Floquil/Polly-S paints. Fortunately, RS was already familiar with those paints because of his extensive experience with studio scale models.

After researching Floquil/ Polly-S paints that were applicable to Fett, RS posted a work in progress color list that exclusively featured Floquil/Polly-S paints. It didn't take long to realize that many of the suggested Floquil/Polly-S colors were the closest colors to the original colors that we had seen- right out of the jar to boot.

Several months after his intial post, RS had the opportunity--thanks to the generosity of a mutual friend-- to ask Joe Johnston, the original painter and designer of the costume, a few paint questions. Johnston stated that he used only Floquil/Polly-S railroad paints to paint the armor and helmet. With the paint brand confirmed and two board members picking Panzer Olive Green from a swatch card while next to the actual helmet, the case for it being the correct color was compelling.

So unless Anita's paint and Dusty Green were available in 1978-79, when the ESB helmet was painted, it's impossible in the most absolute sense for that to be the correct color. That goes for just about any other paint that wasn't available back then and that wasn't used in the industry. Panzer Olive Green is a Floquil color, which was confirmed as the paint of choice for ILMers and Joe Johnston, and it was available in at the right time.

The ESB helmet in the SE shots is the same helmet that was used in ESB. The helmet has not been repainted or reweathered. It does have some additional scratches, caused by peeling paint, and dirt and grime, caused by poor handling and storage. But the base colors remain the same as they were in 1978. Photographic stills taken on set are very deceiving. Trust me, you arent alone. I know many of us struggled to adjust our perception of the helmet after we had natural shots of the suit and helmet to contrast the flashed-out tour photos.

Below is a progress picture of one of the first, if not the first Fett helmet RS painted. Notice that it is a dark photo and Panzer Olive green looks pretty light and "right" in the photo.

Naturally, you are free you use whatever color you'd like on your helmet. It's not uncommon that some individuals prefer an idealized look or "post-processed" look for their suit. But you seemed interested in the facts and true history of how the real prop was painted, and if that is what you are after Floquil/Polly-S is the way to go.
S

AHHH ….this makes sense now (as the light bulb goes off)……

Maybe RS can chime in here, but is this the same reasoning for the choosing of the BOX CAR RED color??
Can you guys Elaborate on that color choice as well?
What I mean is for that "time line" were there any other "variations" of RED that were even considered.?? AND if so, which ones? and why were they eliminated?
THANKS for the input.....

I love this kind of stuff, seriously.

Well I think that answers all my current questions! Thanks for the history lesson, it was just what I was looking for. I can see how complete the research is for choosing Panzer Olive and am now fully assured.
Thanks again.