Stripes are on, and battle damage mask out markings removed.
Probably start scuffing up this weekend.

And, the weathering has begun.
Thankfully, having that layer of silver makes a lot of the small silver scratches and nicks and scuffs are easy to just scrape off with a hobby knife.
So, I started with the visor area, as the other areas of the helm have a bit too much green and darker layers to scrape through, and using hi-res up close pics from the Magic of Myth exhibition of the ROTJ Fett, I was able to pretty much duplicate most of the fine lines and detailing simply by scraping the red away.
I even added the "checking" in the paint that I never saw on the helm until those hi-res pics were available.
There's a lot of even smaller dotting of silver/white, but that will probably end up being a "spackling" from a brush when everything else is done.
I also added some silver to the larger damage streaks, and dotted some black on areas specified in the ROTJ stencils.
The back slotted panel has also been completed with the silver/gray paint layer, and scraping away the detailing.
The red and blue "turn signals" have also been added.
Taking a break for today, to rest my eyes, and re-calibrate my senses with some coffee and X-Men Animated series.
Maybe later I'll start the minute detailing on the green areas, using those thin pointy end q-tips and some Testors silver paint.

So far your paint job looks great. As you might have already noticed, the stencils were made to replicate the state of the ROTJ helmet in its original state (1980-1982) and not as we can see it in the exhibits. Also the killstripes on the ROTJ helmet are not parallel to each other, but are inclined chaotically to the left or right: 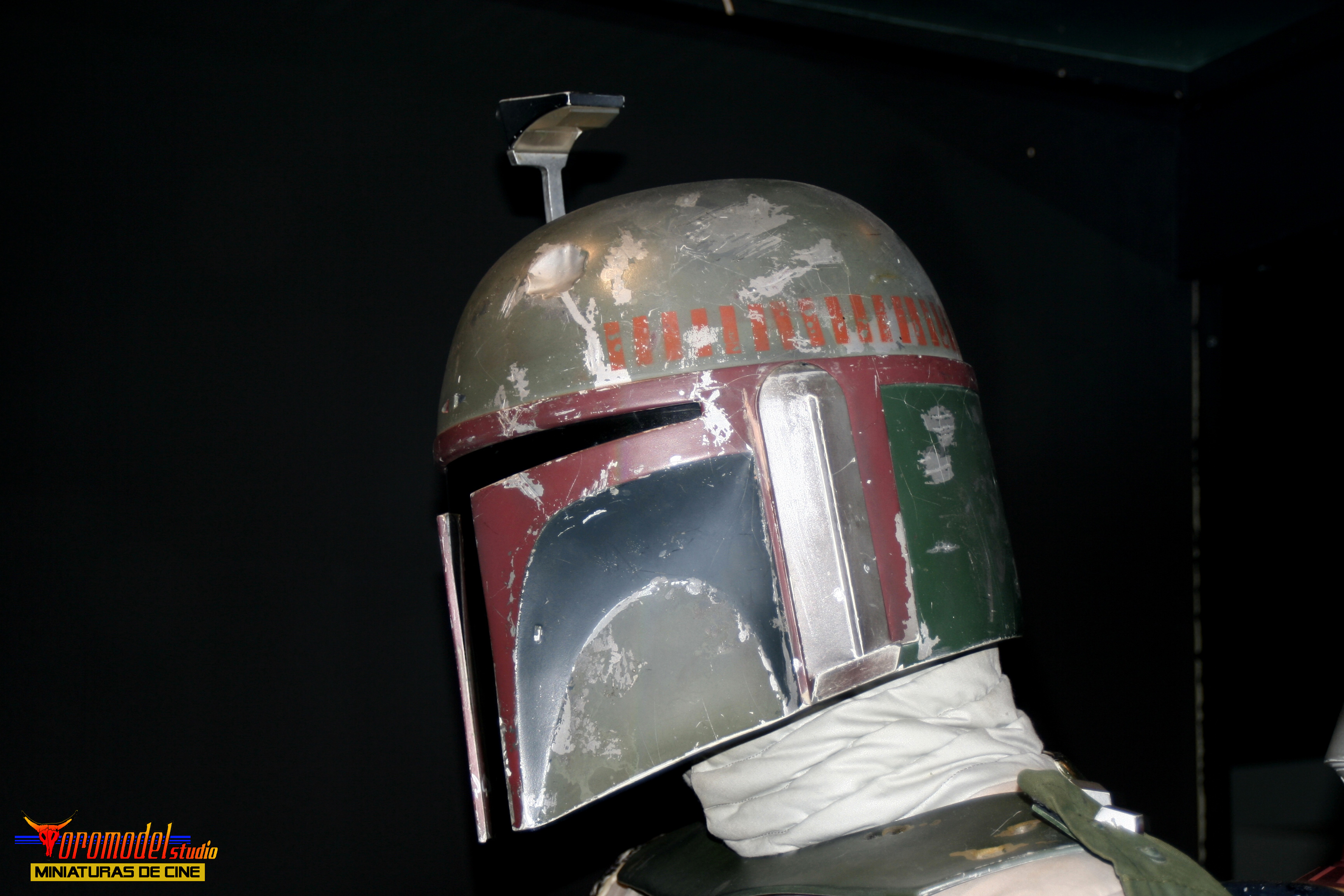 Keep up the great work!

Yeah, I noticed that about the stripes, and purposefully didn't mask out the stripes too perfect, trying to keep that randomness, but still wanted to have it have some uniformity. Thank u for the encouragement!

Coming along nicely. I need to get back to work on mine. I’ve been taking a break from it.

The weekend saw the weathering on the facial area ( visor band, mandibles, cheeks upper/lower) pretty much done.
Next, on to the back panels.

So I've been working solely on damage paint job before actually "weathering" it.
Got the full face done , and just finished the rear ( visor band, and L/R panels.)
Next, I tackle the dome.
Here's today's work.

Last night, my worst fears were realized, as I was intending to move forward with starting damage/weathering on the dome, I gave the rest of the helm one last pass for quality, accuracy, etc...using all previous references, and for whatever reason, when viewing the Fett scenes on the glorious 4K disc of ROTJ, it hit me that I had a ton of detailing on the visor/face area that I got from otherwise legit reference photos, that WASN'T on the actual screen used helm.
I checked EVERY shot of Fett in the film, and compared it against my current state paint job, and it was clear to me, I had over-detailed it.
I think my biggest fault was only referencing the Magic of Myth ROTJ Fett display when I painted, which was accurate, but also had apparently incurred much new damage and scuffing post filming, which did not show up on screen.
So, I literally spent hours painting myself out of a corner until I was sure, within a reasonable measure, that the paint job was NOW accurate to ON SCREEN.
I believe I got it, but.....I paid for it with a lot of surface texture that wasn't there before, from all the brush overs to cover up wrong/misplaced details.
Here is my final result.
I would appreciate any input some of the elders here may have on my results, and if the paint job is acceptable.
I eventually may try another ROTJ conversion on another BS Fett, now that my trial and error, experimentation phase is pretty much through, and I know exactly what I need to do and when for next time. All colors, combinations, techniques, etc.
It would be promising. : )

i actually like the extra paint damage, looks more authentic......but overall you did a superb job!

mandomigs said:
i actually like the extra paint damage, looks more authentic......but overall you did a superb job!
Click to expand...

1000 grit sandpaper to the rescue. smoothed out the spot paint textures a bit , and eased up the spiderweb wrinkling from the satin finish being a bit too heavy in the corners . And yes, it looks more properly weathered now actually. lol

Damaging has begun on the dome. No better place to start than the dent, right?

Ok....as far as my skills and patience allow, the helmet paint job is complete.
Not dead on perfect, and that's ok.
The helmet itself actually varies in different shots, so, what IS accurate, right?
The ears are next.
Progress will be reported as well.

Good stuff, man.! We gettin closer to the final product

Thats looking good! Interested to see how it will look once you have it all assembled again.

Very Nice, Looking Great!! Looking forward to your next pics!

Ok..well....here it is.
With the exception of the Casio circuit replica behind the keyslots ( one is on it's way ), I'm calling this one 'done, and done'.
As best as I could muster, rattlecan and hand brush painted, with a few noob missteps along the way, I'd say I'm rather happy with it.
The visor was adorned with some window tint, and it made it dark, whooo boy...but, the window tint always leaves those little specks that I'll have to try to squeegie out, and if that fails, it's easy enough to remove to replace with a proper replacment.
I may or may not attempt another one, but not right now. lol
I'm going to take my time to enjoy my work.
I hope you do too!
Anyone with better insight on these things, feel absolutely free to impart your wisdom so if I have another run at one, I can step up!
Pics below just for quick reference.
May take better lit, macro's later...we'll see. : )
The two at the bottom are the original state next to the finished mod.
And another fun one, with my Hasbro ROTJ next to the EFX ESB.
Great....now that's "over'....NOW what do I do?!? lol
Maybe I'll try and pretty up the old '95 vinyl Don Post Fett I have....hmm. lol