So... many firsts today. First of all, the 2017 Alamo City Comic Con is my first Con. Second, this was my first public debut of my costume. While it is not 100% yet, I deemed it "close enough." Special thanks to Lou (Darth Vorhese) for delivering my JP and gaunts on time. I painted and assembeled all of the other parts. I have to hand it to Lou. First of all, I could not paint those parts to DVH level quality as stencils just don't exist for these parts. And man, the attention to detail on the JP is top notch. Great work if you can afford it.


Here is a picture of me solo. 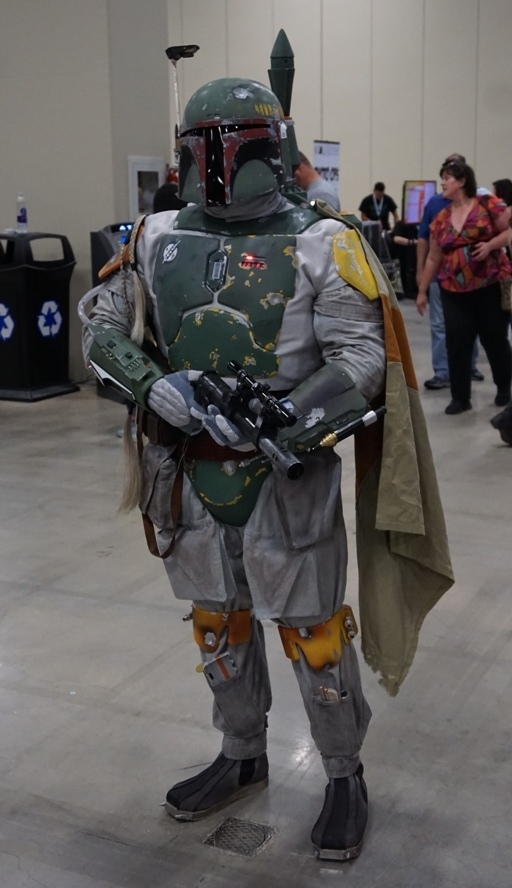 So this was my first Con and not 15 minutes into it, somebody starts chatting me up about my ESB Fett. He is wearing a Starship Troopers costume that it pretty cool. Turns out he is none other than Scott Kaufmann, aka "The Dent," a moderator for TDH. He's a super cool guy and lives about 30 minutes outside of my home town of San Antonio. We could barely talk as everyone around us wanted pictures, which I was more than happy to do. One of the frustrating things I discovered later is that I was craning my neck up to try to extend my short neck, but it resulted in the helmet being at an odd angle and my chin was exposed in a lot of shots. You live, you learn. 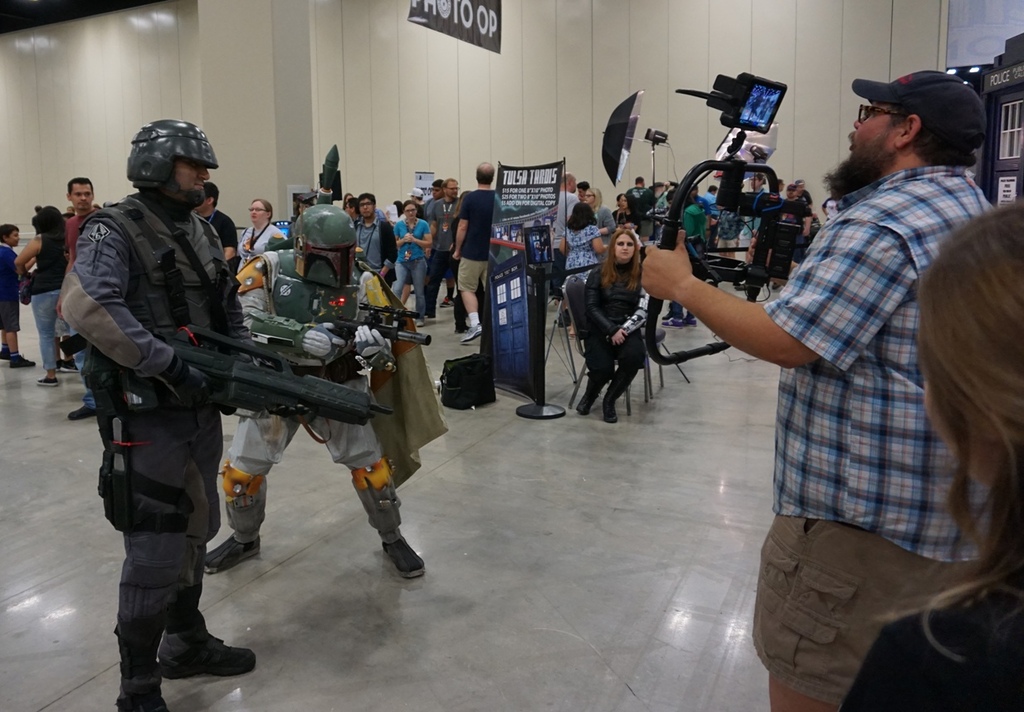 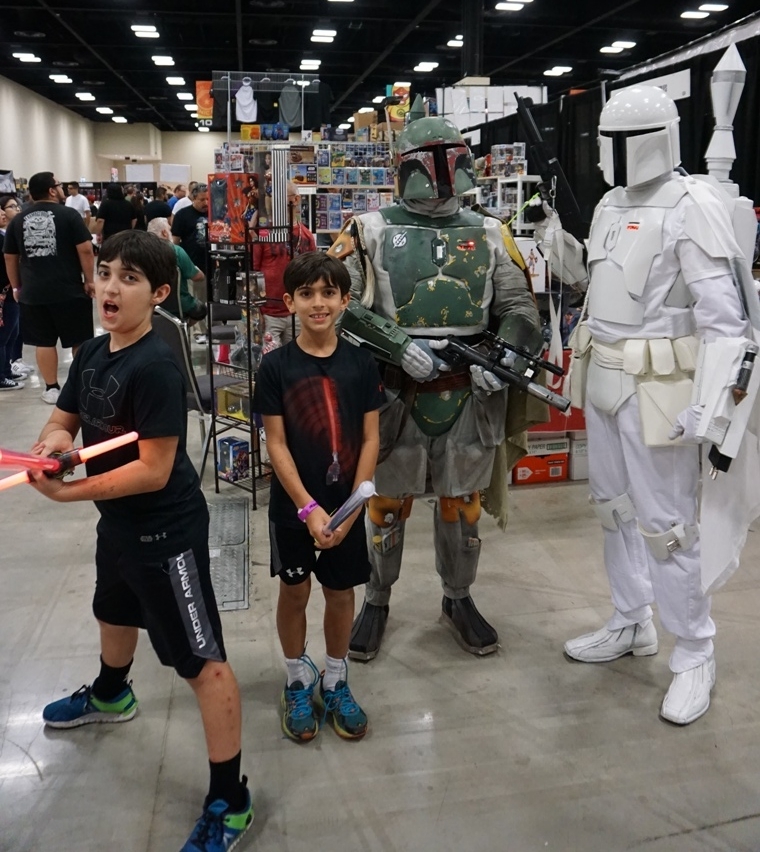 Here is a closer shot of two things: 1) Lou's Jet Pack (which, as you can see, it a sight to behold) and 2) the Fett wedgie. If you don't have a gray piece of elastic crawling between your buns, you just aren't Fetting right. 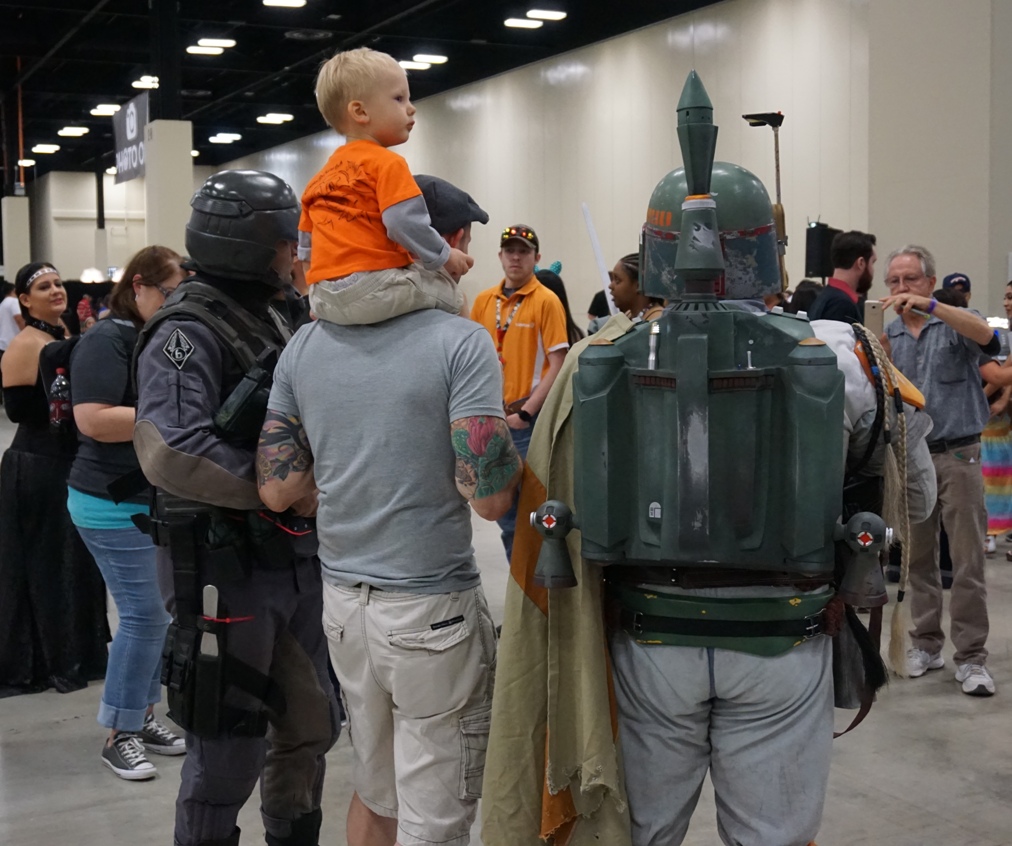 Wookie costumes are tough one to pull off. I think our relative heights are perfect here. 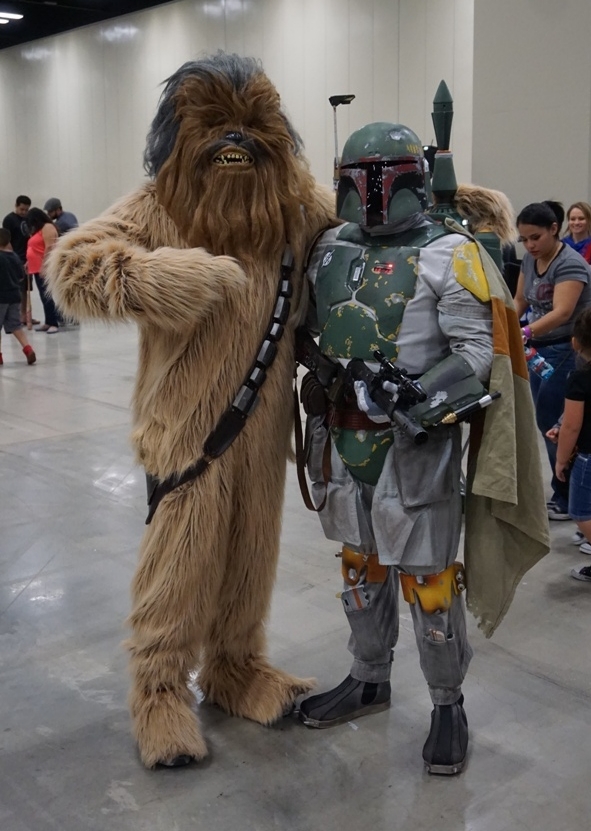 When a Jedi wants to go toe to toe on Tattoine, you do it. As to why the rangefinder is down, well, it helps to know when you are in range of a lightsaber... 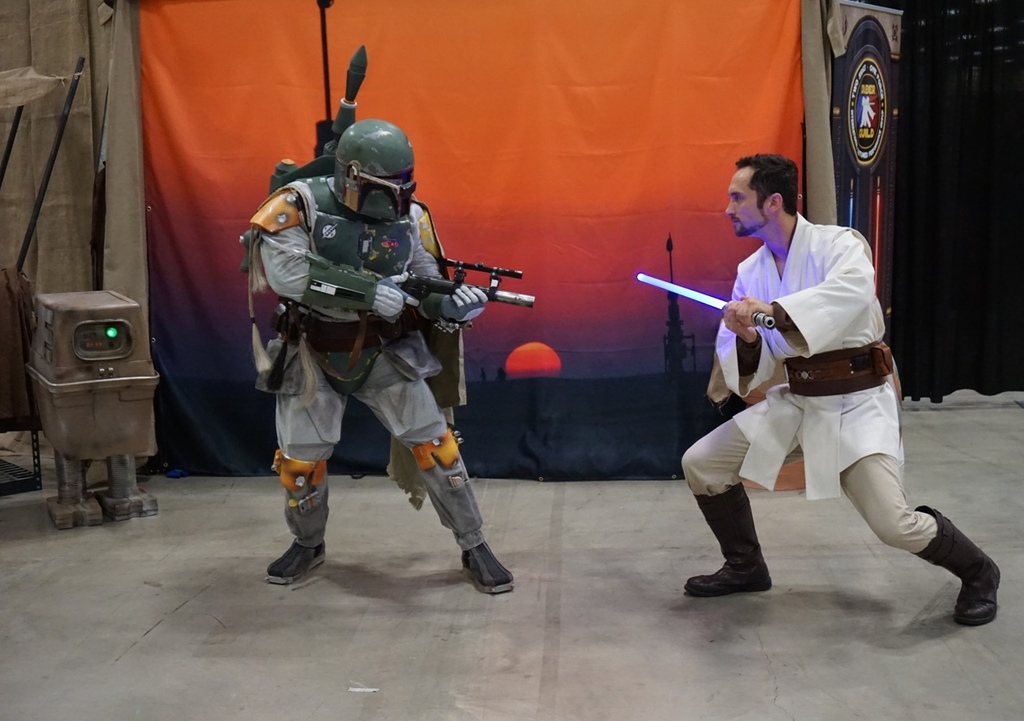 Well I had a great time. In the future, I need to take some time to pose in the mirror to make sure I get the head tilt right. I also need to invest in some of the those helmet fans. It wasn't so much the heat that got me, but even with Rain-X anti-mist on the visor, it quickly fogged up, making my poor visibility even worse.


And the breakage! I knew to expect some breakage, but I lost a molex connector off of my EE-3 from when they chcked it in, and then the most frustrating things was having the tailgate of my Suburban take the rocket straight off of the Jet Pack. Ugggghhhh. On the bight side, I think I am going with an aluminum collar when I do my repair... so it will probably look even better after I repair it.

Looks awesome man. How did the flamethrower hold up? I know that's an easy one to catch on stuff if you're not used to wearing the costume yet.

The flamethrower did great! Thanks! I will probably get your clear nozzle. I wasn't letting that one part hold the whole thing up. I still need to install the wires, but Lou did a great job painting the flamethrower up correctly.

Preferred Vendor
Congrats on your first outing man! One thing I noticed is a fold in your vest between the collar plate and the top chest armor plates. Any way to adjust them and straighten it out?

I am sure that if I put the costume on a second time, it will fit differently, so I am less worried about that than some of the other inaccuracies. Some things I can't do anything about, like the fact that my torso is so short, you can't see much area between the flak vest and the cod piece. Or that there is very little distance between my knee pads and leg pockets. Being short sucks and I can't custom make every single piece of armor. I have to live with the fact that even if I get every single detail right, a lot of people will wear this outfit better than I can. But it didn't matter to all those kids.
J

That's so awesome!! I'll be going to my first con ever in just a few weeks! Sucks I don't have everything to actually suit up but I can't wait for just to experience it!! All of yours looks great man!!


Sent from my iPhone
P

Pretty sure I took a pic with you if this was the ACCC. Unfortunately I was dressed as a brute splicer from Bioshock and looked rediculous. You looked awesome though. Thanks for the pic.

I have to confess... I had zero visibility in the mask. I was looking through the vertical portion and the visor was completely misted over. My wife was taking pictures, and I was like... I don't remember taking a picture with HER

I was only there on Sunday and the only other Fett I saw was the Super Trooper, so yeah, that was probably me. Good to meet you!
P

I can send the pics I have of you if you want them or just look me up on face book (Chad Collier). I always take at least one pic w/ Fett if they're around. Good to meet you. I may be asking you questions when I start my build since I live in SA too.

I just saw the pic! Yeah, that was me. I can tell by the EE-3. You got one with me and the Super Trooper. I was pretty pumped to see that. Let me know if you have any questions!

Community Staff
It was awesome meeting you, buddy! I'm glad to hear that you and the family had a great time. As I said when we talked, your ESB looked great and you did a great job with it considering that you had never handled an airbrush before. The first time out is always a learning experience when it comes to Fett and something always break. I can't wait to see how your Boba progresses further!

Looks great!! Glad you had a good time. I find my head is always tilted down since I worry about my chin sticking out and I look like a buzzard lol.

I wipe my visor with Dawn dish soap the night before. When I go to wear it I wipe it lightly with a damp towel so it isn't blurry. I have yet to have mine fog up on me. I don't run fans ( I have them but don't use them) .

Thanks, Scott! I wish we had more days. Some of those panels looked really interesting. I have my punch list down to 15 items. By Halloween, I hope to make an HIC.

Hawk, I bought some Rain-X Anti-fog. It worked pretty well for a while, but this will be a problem going forward for me. For one, my nose is slammed up against the visor because I have a huge head. A chin strap would probably help that situation. Secondly, I sweat like a beast. This is a problem even with shooting glasses. I shoot competitively and have bought every sort of anti-misting glasses under the sun. None of them work too well for me, which sucks because eye protection is mandatory in the shooting sports. A helmet fan probably won't keep it any cooler, but it might circulate the humid air out enough to keep the massive fog problem at bay.

Man, the suit is disorienting... but I had fun with people. Hopefully, next year, I will be able to make the contest.

Preferred Vendor
the Dawn soap is a good idea. I have this stuff called cat crap...yes thats the real name lol..its an anti-fog paste/gel, comes in a little container kinda like carmex...works fantastic!

I will try those out next time. I found cat crap online. They sell it at Walmart. Who knew? I will have to go there and ask them where they keep their cat crap... 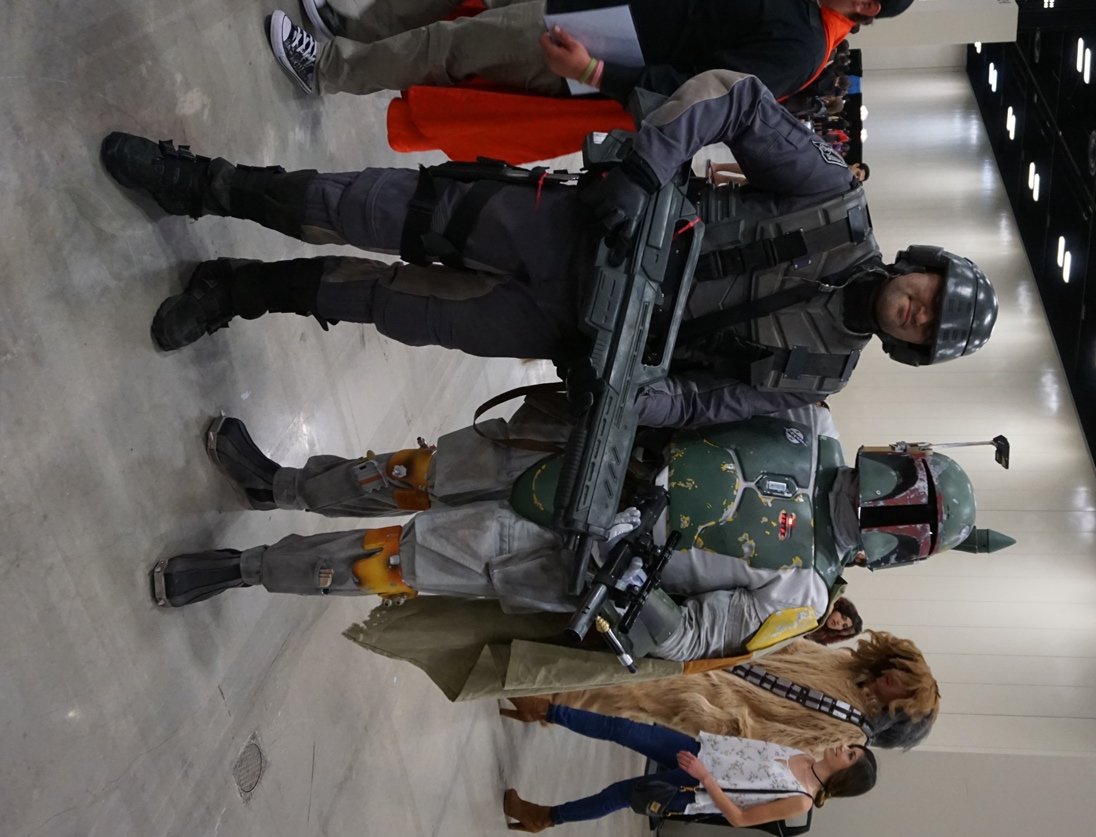 This looks like it was fun! Suit looks great!


Sent from my iPhone