If it's another Michell part it won't be from the Hydraulic reference although a focus one might be a possible. They're not that expensive (or that good) so one for spares or repair might be worth a look but it still won't be cheap and if it's a non stsrter it'll have to be offloaded. It's worth a look but I think the helmet is worth further investigation. Interesting thing about the riot helmet thing though; even though the chin cup kight be a match the police in the UK didn't really use this kind of equipment in the 1970s. Widespread use of this kind of thing wasn't in use until mid 80s onwards although some were being used in the 1981 Brixton riots so the correct model of very early riot helmet will be very rare.

After viewing a FS thread in the cargo hold and seeing the damper pulley still being used I wonder what was ever decided in regards to this thread.
Agreeing with intwenothor, I think the pulley is too small. When I assemble my esb ee3s or send a kit out I dont include the pulley any longer. Instead I send a modified cast of part no.43. I molded a 43, not to destroy my original, sanded off the teeth and sanded down the raised center (slightly). It gives the connecting rod a platform to sit on that levels it across onto the webley chamber. The piece ends up looking much better IMO. Pics later today if needed.

Pics would be nice please.

I tink we pretty much decided that neither revell part was right. The pulley front half is way too small. The other part (is it called the timing gear?) Is a better size and has the raised centre which is clesrly right but the teeth are just too hard to ignore. It's so unlikely they sanded them down as it'd be such a ball ache and everything was just hastily added. Sidewinder presently does a pretty plain disc that fits the bill quite nicely; it's boring but accurate looking.. I think the riot helmet disc it worth further research which is why I suggested it.

OK. I quick grabbed a B grade barrel and the pieces in question.

Pictured are casts and originals with the damper for reference. So I molded the original then sanded a pull, then molded the pulled sanded cast (I hate altering orginals).

Keep in mind that the casts shrink, and this being a cast then altered.

This is the sanded cast sitting on the timing wheel (43). Really not much taken off.

The v-8 rods just touch the side of the chamber.

I think we can all agree that they just poured a bunch of kit parts on a table and started gluing. The "sausages" look filled in on the reference photos. Being that one of these comes per kit, it is possible (though very unlikely) that they did mod this part. If they did, it's not out of the question that they filled in the "sausages" on the cast. Then again, the damper pulley only comes one per kit (I believe), and bossk's rifle had 2 of the dampers. So we're obviously dealing with multiples of the same kit unless my memory is incorrect. Let's also not forget the Solo's DL44 had pieces from this v-8 kit as well as an airplane kit (cant remember which one).
Of course, theories for the sake of theories. Personally I believe it is still an unfound part.
I'm always buying old revel & renwall kits and random boxes of pieces so I'm going to continue to look for these. It's safe to say that it more than likely came from one of the pieces (this kit, the Mitchel, etc) that they deconstructed for parts.
...my 2 cents.

I think it came out very nicely so good job. If you are only interested in the model kits for the Boba parts then you might as well just buy the modern version as I'm pretty sure it features all the parts you need and is a lot cheaper. I can't remember all the exact differences and both versions are in the loft right at the moment so I can't fully check.

I went ahead and took the best pictures i could find and changed the brightness and contrast and color and stuff. Maybe these will help someone ID this bad boy. There are definitely some shots where the V8 rod is missing and you can see what was holding it in place. From what I can tell it actually looks just a tad larger and thicker than the timing wheel (but that might be the best bet for now). The last shot on the right I added the picture I took of the helmet part with the V8 rod attached to compare for size. 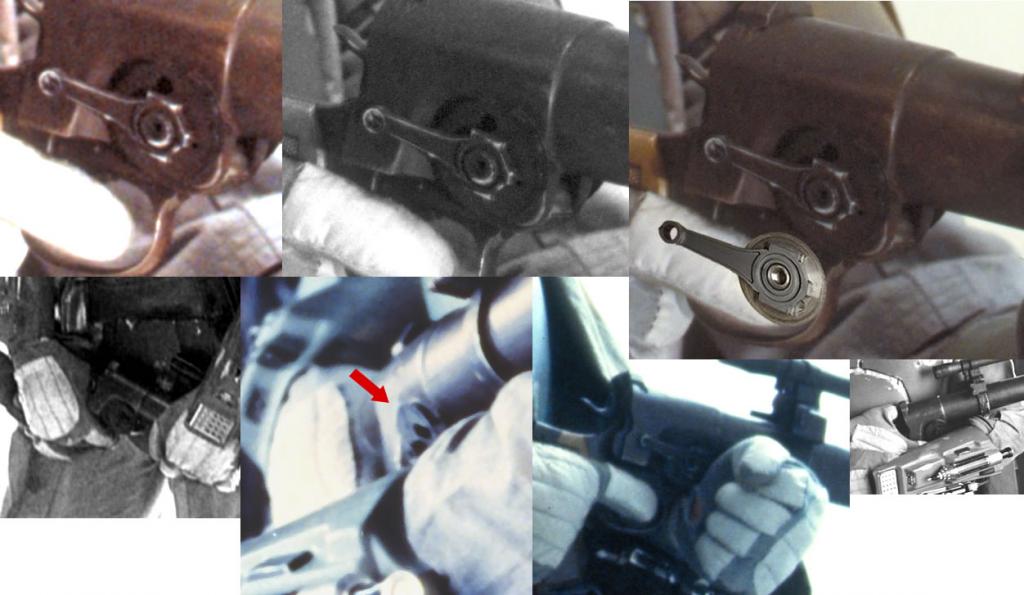 By the way, I tore my helmet apart and there wasn't much inside...:unsure

Sidewinder said:
I don't agree on part 43, too many details are missing/incorrect/inconsistent across different pictures (also the central stub is much too tall).

How about this:
View attachment 63820

Nice work Jimmy! So, the timing wheel is too small. Sidewinder's pics look great. Time to prototype a new part...

Sidewinder does an excellent magnet version of this for guys with real/metal flare guns Bump..lol


Sent from my iPhone

I've been looking around and I've been thinking about other possible options... Has anyone looked into a reel to reel hub or Pinch Roller? or maybe even the middle of a take up reel? I've been trying to think of other things that someone in the movie industry would have access to, that was simple and maybe obvious.

I'm not sure what there is to see the photos!
perhaps you will be both used or it's something else!

But really cool work by intwenothor!

So I did a little prototyping last weekend...
How about some opinions...

Pics with size reference to other used parts, angle to simulate screenshot. Just a quick prototype. Dont wanna go "all in" before the forums eagle eyes have a look at it. Opinions please.
N

I see you saved yourself from having to make 2 different moulds for this piece by putting the small hole under the piston arm. Very crafty!!

It looks just like what's currently offered with the Sidewinder kits. And I know that design arose from this very thread, didn't it? Looks good to me, so far. Someone else can compare the relative size of the piece to Set pic references. 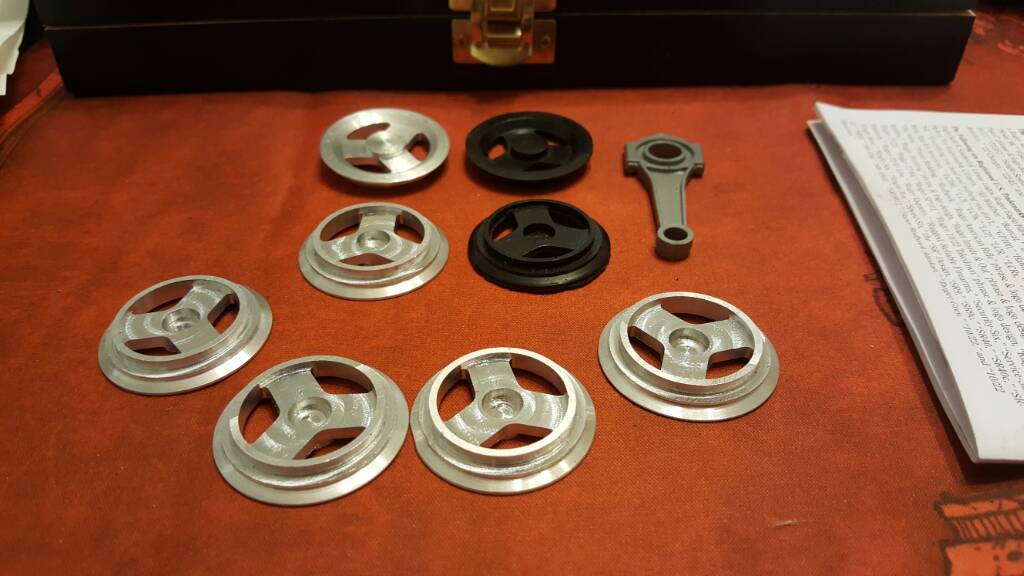 Well now I feel dumb for being late to the party and forgetting about this thread. I saw this a few years back but never followed up if there was a decision made on what the part really was and now I recently produced these in aluminum with misinformation.

I'd really like to hear what people think is the correct size and style these days.

I don't need to know the found part as much as what we think it looks like...since I can reproduce anything regardless with dimensions

Well, I think my ideas around part 43 Timing Gear were definitely WRONG but my assertion that it was not the Pulley front half (107 I think) are definitely right. Your aluminium pieces look very nice but I don't think this is the right piece. Given the lack of quality images and the rather generic nature of this greeb I'm not sure we'll ever know exactly what it is. Sidewinder does a nice disc option. It's pretty plain but I think it's a fairly good representation based on what we can see. Since this thread and his offering it more than one vendor seem to have used his version as a template of sorts, the most recent being the option offered by Portumac at the RPF.

It's a similar story following the thread where I suggested the Maclow clip and Lonepigeon suggested the Swimming pool clip. Neither is quite there but seem better as templates/starting points than anything that preceeded them and also seem to he the model for kits other than Sidewinder's since he offered them e.g. Portumac again. They're certainly preferable to the scratch builds on the older kits in my view. That's not to denigrate those older kits just sometimes something better is out there in the fullness of time. On those I'm still not in agreement on the rear clip but as I'm in a minority of one on thst subject who cares what I think! Hahahaha. 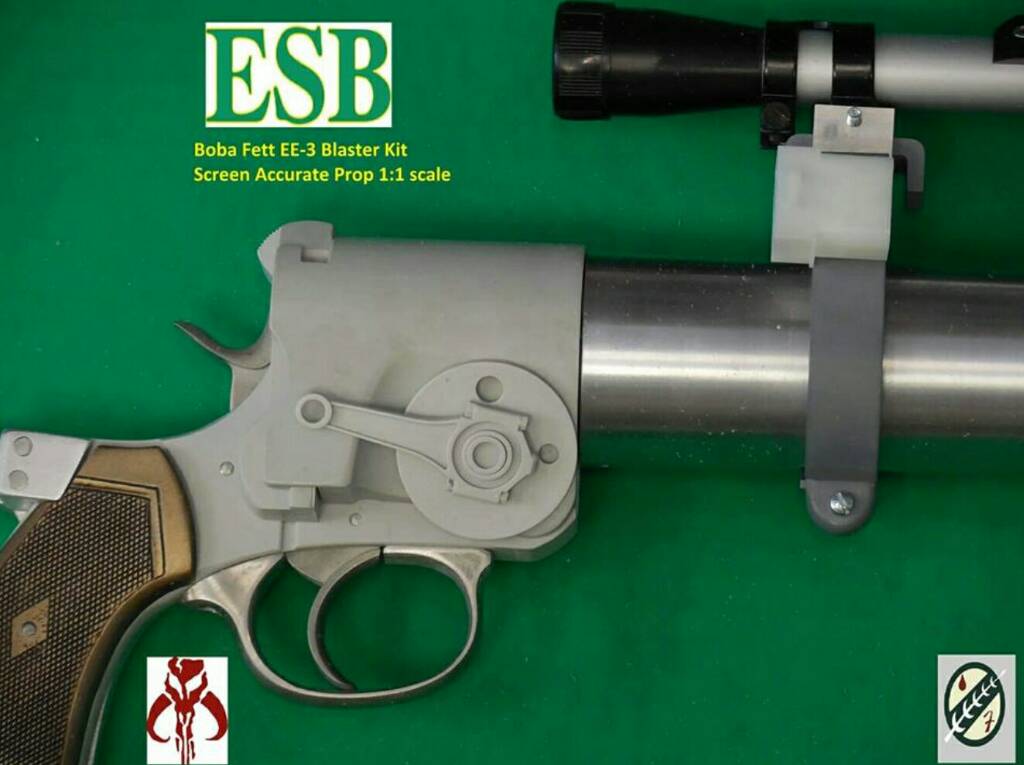 This is what I found on his kit 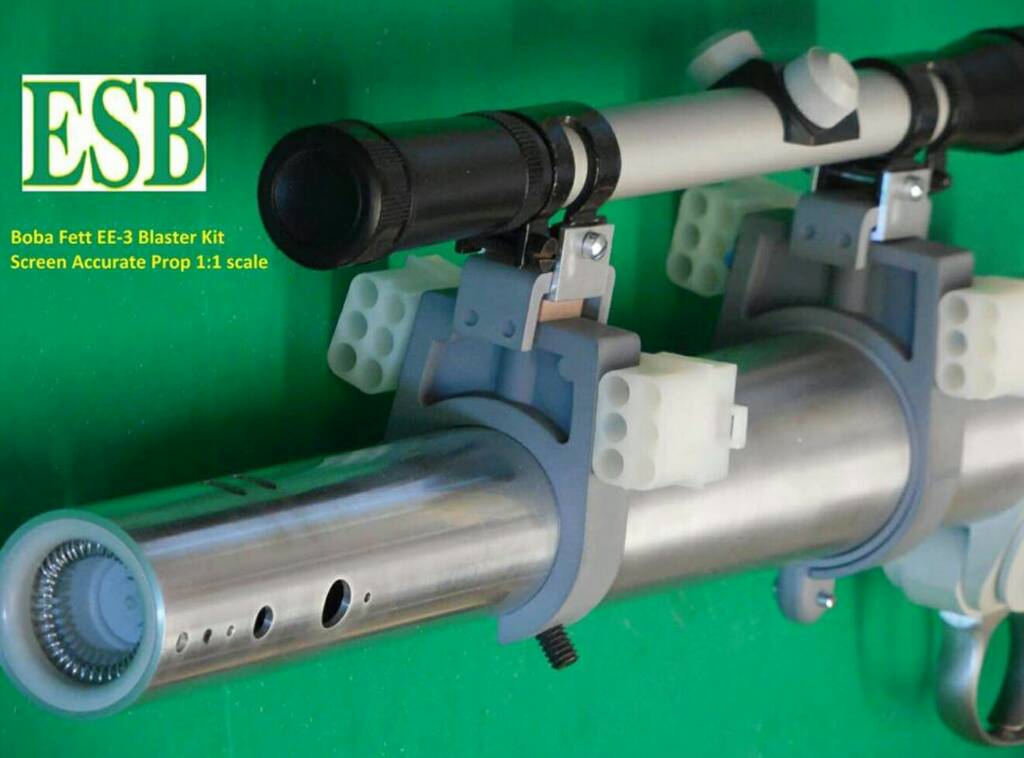 This is the scope and barrel mount as well. Not sure if he's changed anything since 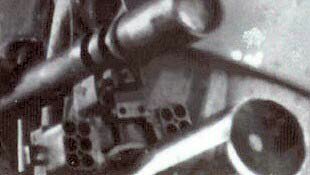 This is a screen grab 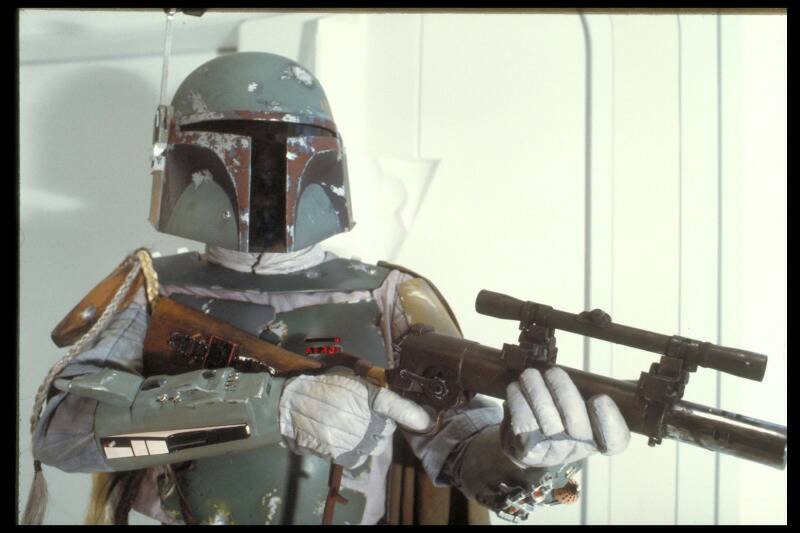 This is a different angle. Again. This is all very hard to distinguish based on lighting and photo quality

I mentioned the Portumac replica but if I were making a screen accurate replica of the ESB EE3, which I am not, I'd be be very careful before I'd copy his model as a template; he seems to have copied Sidewinder on the discs and some other pieces but he doesn't seem to have done it so well. Some other parts of his kit are further suspect. His original hyperbole, on the RPF, had some claims that were a bit suspect whilst some other parts were outright lies as I since discovered with a bit of plain internet research; he's since deleted those posts and offered a more truthful and generic descriptio (I can back all of this up before anyone asks). That said it's still a nice replica but it isn't a great one. My comments on the RPF drew the ire of one of his pals; it's great to stand up for your mates but not when they're gilding the lilly.
Last edited by a moderator: Jul 8, 2017 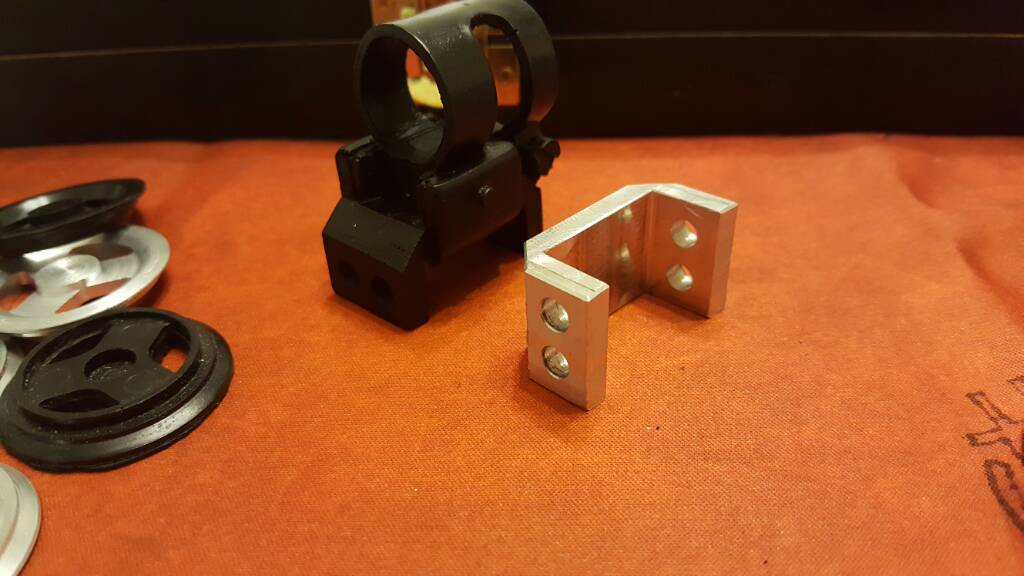 Hadn't planned on copying anything. It's all reference to me. I have one of my prototypes above but I'm thinking of changing it again.

The disc I'm making tomorrow but I'm not sure if I back the same design others have come.up with just yet. 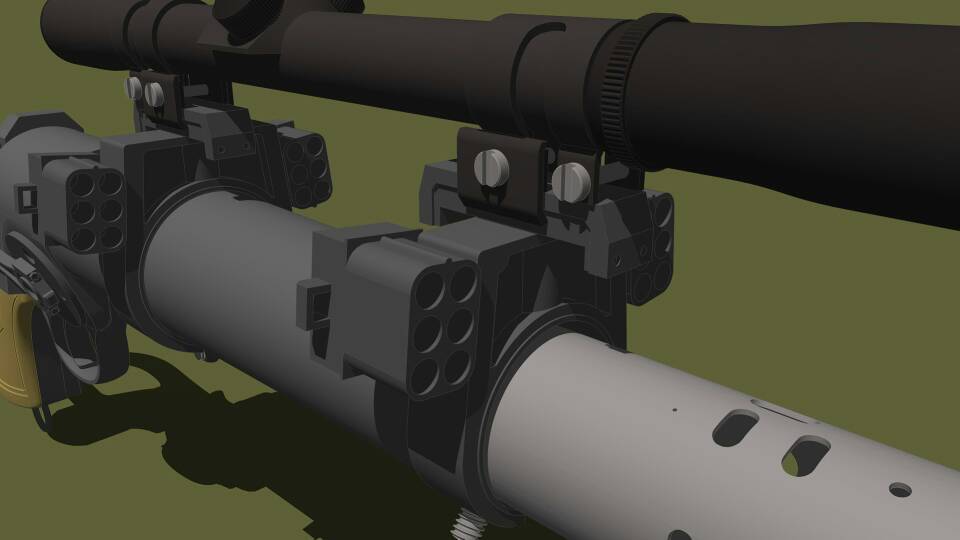