This is my first shot at creating my own variation of the EE-3, and so far I'm pretty happy with the results (and I've only spent about $8 on it so far). 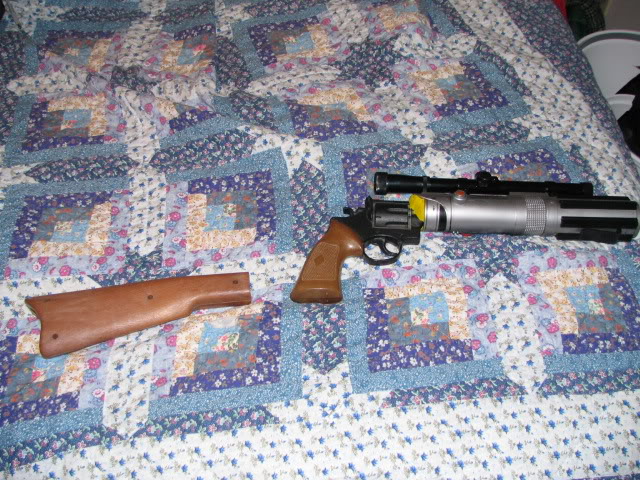 This picture is a completely unpainted shot, showing the materials used. The first thing you'll notice, most likely, is the Darth Vader lightsaber ($7 Wal-Mart version) used for the barrel of the gun. I got the toy pistol from a yard sale, and a toy rifle at the same yard sale (I took the butt off of it), for a grand total of 75 cents. So, I took the blade out of the lightsaber (you can probably figure out a way to do this for yourself, I used a vice to pull the top part of the lightsaber off and then slid the blade out) and super glued an air gun scope I had laying around to the top of it. Obviously, the interior of the lightsaber is going to be much larger than the circumference of the toy pistol's barrel, which comes to the yellow stuff you're seeing inside the saber. Play-doh. That's right, I stuffed the thing full of Play-doh, put some super glue in to hold it in the right spot, and let the Play-Doh dry (the stuff gets hard as a rock, so it's not unstable or anything). If you pack it tight enough and let it dry you don't have to worry about crumbling, especially with a coat of primer and a coat of low gloss black over it as seen here:

As you can see, the semifinal product is pretty nifty, and the whole procedure requires very little time and very little money. Not pictured in the painted photo is the butt, which is painted with the same primer and low gloss black as the gun. After painting, I took both pieces and dusted them with some grey paint for the faded used look, then took some basic sand paper and rubbed little scratch-like wear marks into it. Tonight or tomorrow I'm going to use the torn-sponge technique with some chrome paint to get it the chipped appearance.

I've also got a little experiment going making the brackets to connect the barrel to the gun out of an expired license plate that I flattened. I'll have some pictures of that up after I finish it.

Also, as you guys can probably see, this gun isn't meant to be movie accurate at all. Something like this is great for a temporary gun if you plan on making a more awesome one later, or a gun for your kid to play with. Not a lot of time goes into it, and if you're kid breaks it, no big loss. Plus I think think it looks pretty nice. I'll be using mine as a temporary for anything I go to in my Boba suit until I get around to making a movie accurate one. More pictures up as soon as I finish the wear and tear effects. Comments and criticism are appreciated!

Touch up finished! I added some chromed edges to give the weapon a more real metal look, as well as a chipped, worn look. 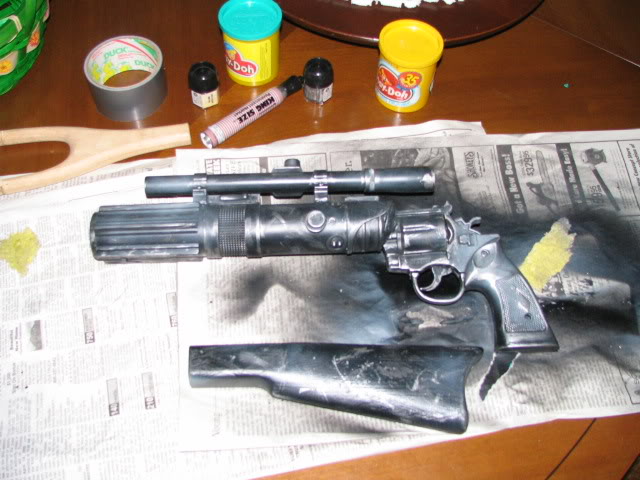 Here's another one. This pic is darker, but I really think that the sponge on chrome is easier to see in this one: 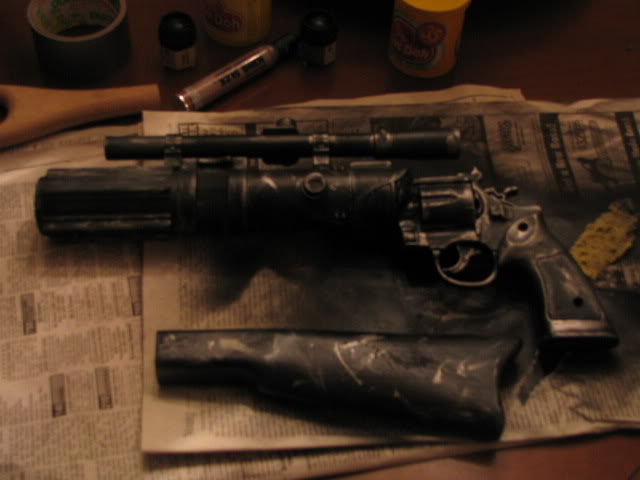 Tell me what you think!

Very creative, and for a custom, it looks great. Without the stalk, it kind of reminds me of the pistols the ARC trooper commander carries in Clone Wars.

looks cewl 2 me, indeed not acc, but definetly a cewl sci-fi prop!!

I'll bet GL wishes he had a creative mind that could make blasters for $8 when he made ANH!!!!

Now THAT has to be the best blaster on a budget I've seen to date. Good job

And Cenobyte, I was kind of thinking the same thing about the ARC Trooper Captain. Minus the scope, this would probably be a good way to make a budget version of his guns too. You'd probably need to cut more off the Vader lightsaber.
S

Almost finished! I have the stock attached to a wooden connector piece I made. The wooden piece MAY be replaced with a metal one later, but right now it's just something to tack it together so that I can play around with it. Most of the painting is done, and only some smaller-ish details are going to be added. I'm currently working on a PVC cutout piece that will cover the revolver section of the pistol, and I need to make some stock decorations to give it a slightly more "accurate" look. Also, because my Boba Fett suit is a cross between ESB and ROTJ (there are different things on both costumes that I like better than the other, and since I couldn't decide, I just said "To Hell with it!"), I'm thinking of adding the 6-pin blocks from the ESB EE-3 to the scope mounts to give the gun a slightly more customized look, even though my gun leans more towards the ROTJ blaster. Remember, I'm not aiming for movie accuracy, I'm aiming to make something that looks good for relatively low amounts of money.

And now, the picture! 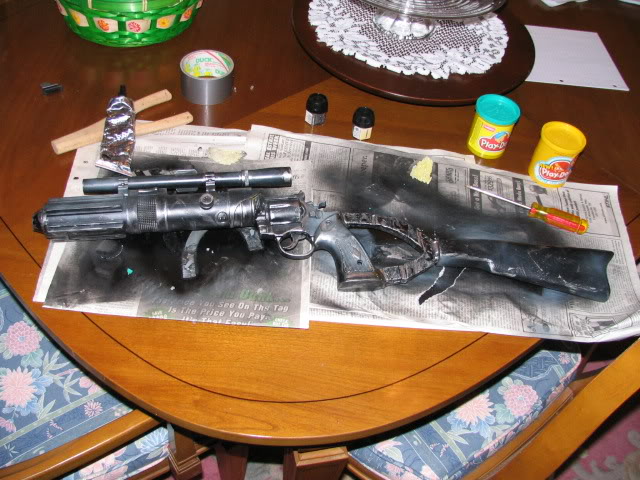 Taken from an air rifle I got a few years back. Thanks for the compliments.
R

Wow, I am so insanely jeleous... I am having to make a fett blaster on a budget, and mine looks absolutely like crap. =/

I applaud you fully!!!
R

I ran to Wal-Mart after work yesterday and bought the lightsaber and found the butt of a rifel at an antique store for 3 bucks. I'll post some picks when done.
S

Thanks! I'm probably going to make a new butt piece some other time, because that one isn't even really close to accurate. I'm going to adding a few more customizations to it also (to make it look less like just a plain lightsaber strapped to a pistol. I'm working on the piece that will cover the revolving loader on the pistol. I'm also adding a strap sometime... I should have something lying around for that. Once I get a better butt and bracket to hold it on, I'll add the decorations to it (they most likely will not be accurate either, but I'll try to make them look cool). I'm also working on a custom bayonette made out of Sintra that will be detachable, just for kicks (Boba with a bayonette, imagine the possibilities). I'm also making two NES Zapper sidearms (I'm actually carrying two of them on my costume).

This doesn't really apply here, but I just won a DP '95 helmet off ebay for $58 and it's coming with a figural boba helmet coffee mug. I'm excited.

dude your playdoh-lighsaber-western capgun- EE3 rifle inspired me.. along with someone else.. i think Vipers, sintra stalk.. Iam combining both of your works with my own imagination to make a rotj special rifle lol cept. iam not tearin up my old vader so i bought a pos Ep 3 saber that has the T hehehe alredy cut some parts off and planned the scope attachement. not sure if ill actually cut the saber out or not. custom blasters will work fine.. if anyone gets close enough to say "thats not movie accurate" hit them with your reinforced butt of the gun ^__^ you are a bounty hunter after all.
S

I will probably make a Sintra stock piece as well. I really don't like the one I have. It was kind of experimental anyway. If you get the stock right, I don't see how anyone could care about the accuracy that much, though. It looks cool IMO, and my costume won't be accurate anyway. My Fett costume is armed to the teeth (extra sidearms, etc). I'm thinking about making those gauntlet blades, too. The ones that Jango used in AOTC to stop himself from sliding off of the Kamino city into the ocean. The main reason is because Boba seems to have virtually every weapon that Jango has (other than the EE-3, of course, and the dual custom Kamino blasters), so why wouldn't he have them?
R

I finished mine today, but the D connecting peice is a peice of scrap wood and looks horrible. Pic looks terrible by the way. I took it with my phone camera on my way to work. 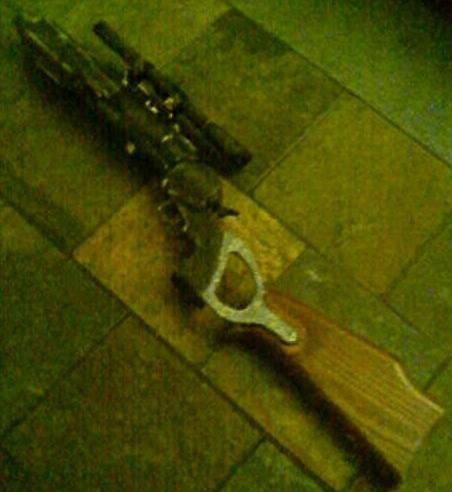 That's phone cameras for you.

I like it, though. The stock piece is way better than mine. I'm going to make a new one eventually though... hopefully. I'm too busy on my helmet at the moment.